And speaking of Frank, Adelaide’s recent travails have read like something straight out of a Sinatra song: riding high in April, shot down in May.

So while we’re not exactly back on top in June, we did manage to achieve the one thing that’s eluded us through a collective lack of accuracy, poise, experience and… well, ability, these past few weeks.

The sort of win, in fact, that is generally talked about more like a loss: the fact that West Coast rallied in the second half, consequently managing to avoid their eighth consecutive loss by 50 points or more (as the commentators never tired of reminding us) gave our victory celebrations a distinctly funereal air.

But, to be fair, that Eagles team still looks really quite decent, on paper at least.

And of course, the match was played at Adelaide Oval – so we have to factor in their inherent advantage. 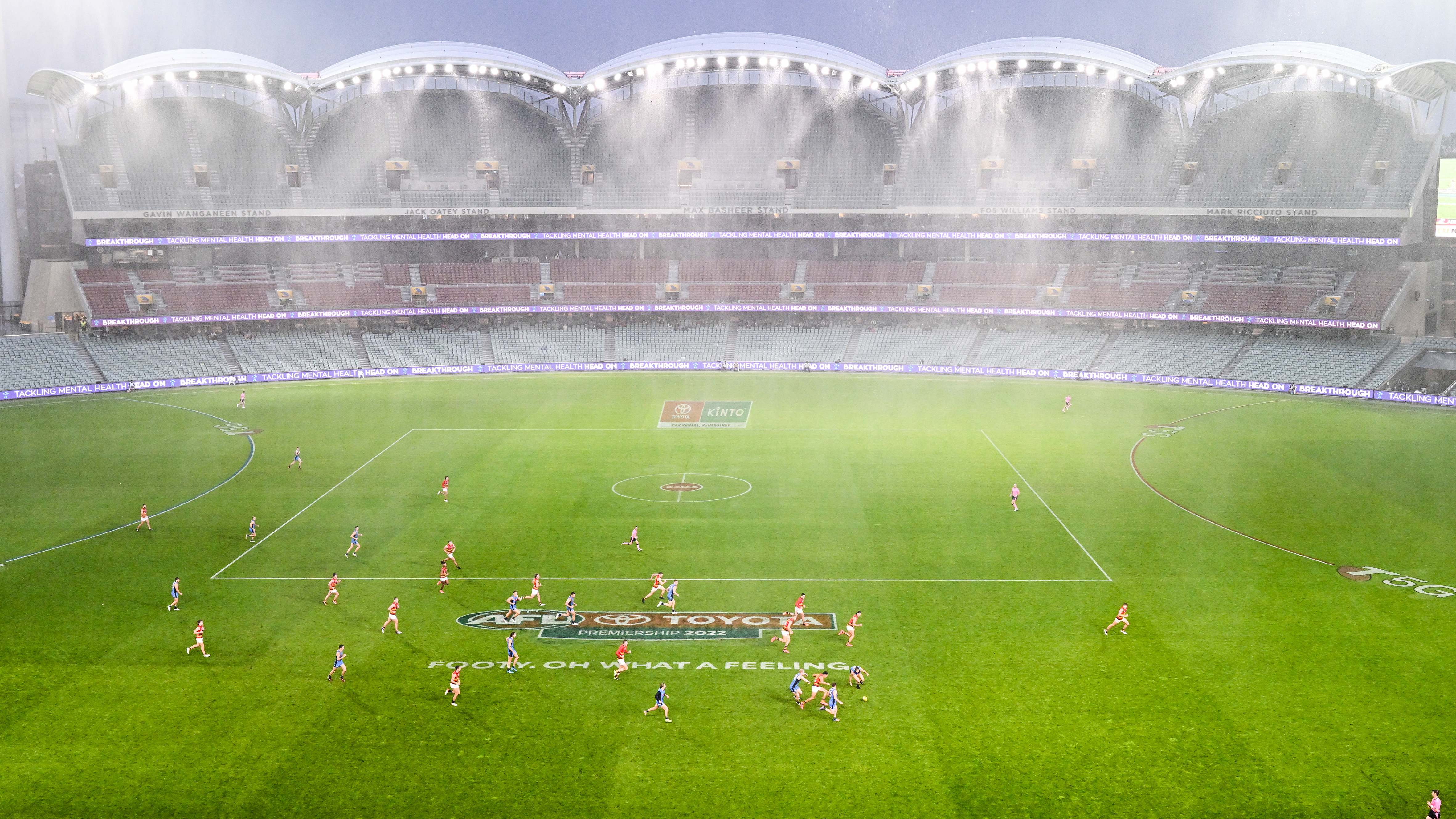 Yes, this was during the post-match SANFL fixture, but the weather was… not good. Photo: Michael Errey / InDaily

But moreover: having failed to win over the preceding five weeks (spectacularly so on at least one occasion), this time we stubbornly failed to lose. Despite, it must be said, our collective best efforts.

In fact, I could get used to it. 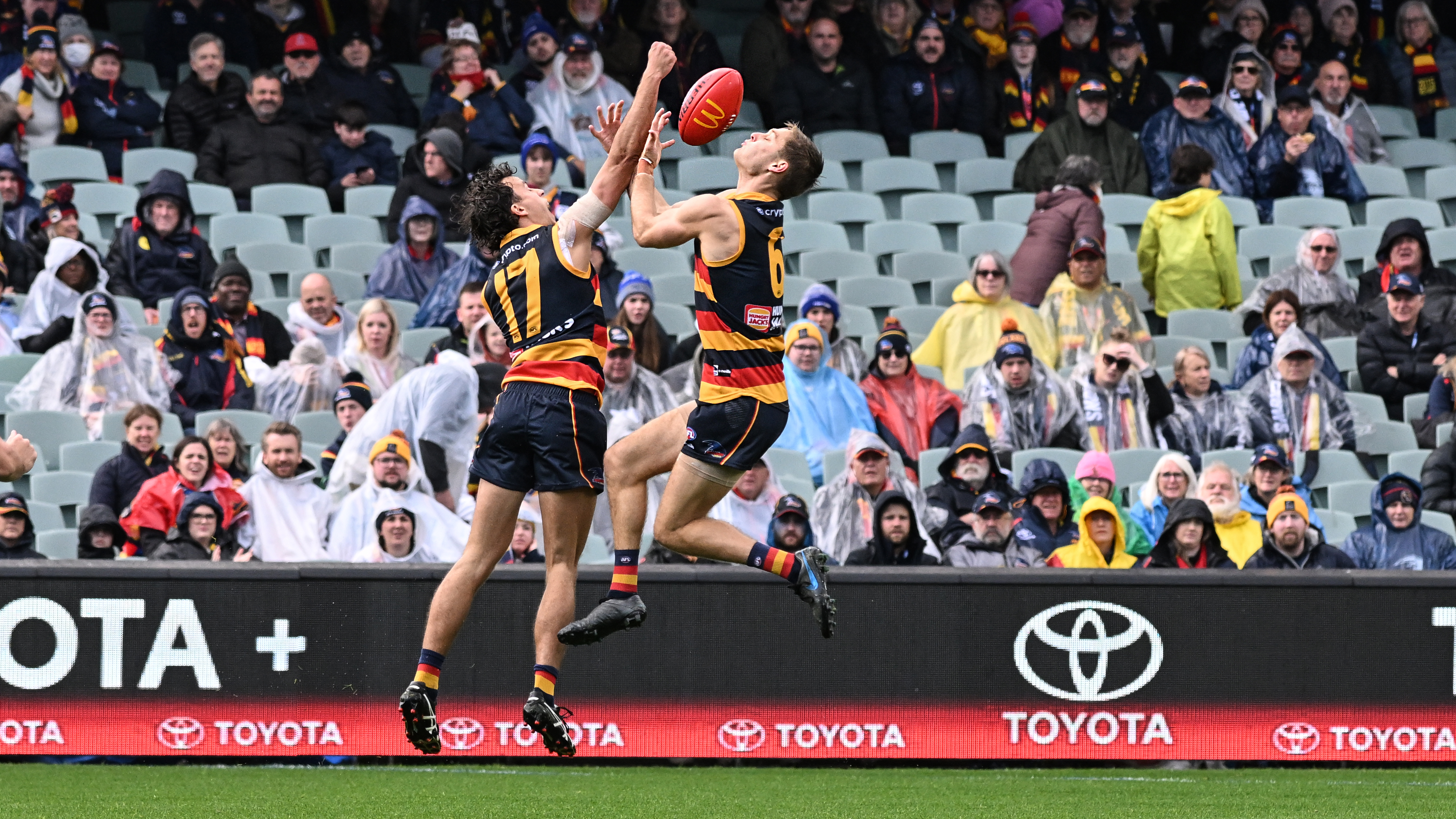 I recall a previous effort against West Coast in Perth, many years back in the days of Gary Ayres, in which Adelaide kicked nine final-quarter goals to five in one of their greatest displays of team attack of that (or any) era.

The trouble was, we were already 40 points down at three-quarter-time, which meant we still lost by 18 points.

But no matter: such a brilliant encapsulation was it of what we aspired to be that I watched that one quarter over and over for about a week.

I probably still have it on an old VCR somewhere (although I never labelled any of them so finding it would be an issue and not having anything to play it on would also pose a problem).

Sure, I kinda had to forget the fact that we actually lost the game – but as an isolated burst of pure football (well, maybe not so much defensively, but anyway) it was a sight to behold.

I think it’s fair to say not many of us intend to watch Saturday’s game again, ever. Not even a quarter of it (ok, the first at a pinch).

And yet, we didn’t lose.

And that is inherently better than the alternative.

What’s more, there were a few hints of positive signs (Fogarty, McAdam, Soligo, Hamill and Parnell, most notably) amid the obvious concerning signs (essentially breaking even with, statistically, one of the worst sides on record).

And if you’ve been reading these Fumbleland missives for a while, you’d appreciate that the most common and rational response to a lacklustre victory is abject despair.

But not this time.

No, this time we won’t be dwelling on the fact that The Fog has generally played games with our collective psyche over his career thus far, ever-threatening a breakout season before going missing for extended periods.

But he did enough, in the first half at least, to suggest a future that some of us were starting to give up on.

Nor will we be dwelling on the fact that while McAdam is having his most consistent season, he’s also 27 – and could be pushing 30 by the time he’s being served by a top-flight midfield. Or that despite their evident poise, Soligo and Parnell have fewer than seven full games between them, and will nonetheless have weekly expectations heaped upon their collective shoulders in a way they wouldn’t if they were quietly learning their craft as unheralded first-year players in a top-eight side.

Soligo, for instance, battled critics from the instant he was drafted, merely by dint of the fact he wasn’t tall and wasn’t from SA.

We supporters, it must be said, are a fickle bunch.

So, this one time, I’m going to let the gripes slide.

No mention from me of Thrillthorpe’s distinctly unthrilling turn, or how our backline is like a folding chair: it just doesn’t work properly without Butts.

No, we needed a win (not, to be clear, for any hopes of salvaging a season that remains a work in progress, but just to remember that it was still possible), and we got one – and that’s enough.

It was never in doubt, of course.

I knew from the second my 10-year-old son came down with a cold and we had to pull out of attending the match that victory on the cards (given the weather, I wasn’t altogether disappointed either).

Together this year, we’ve attended every home match save for the Showdown (in iso with COVID) and Richmond (away on holidays).

So our non-attendance on Saturday basically ensured the win.

Moreover, with the bye this weekend we can, for the first time this season, be confident of two weekends without a loss. And with the worst footballing outcome that might befall us the prospect of Port getting over the Tigers on Thursday night. 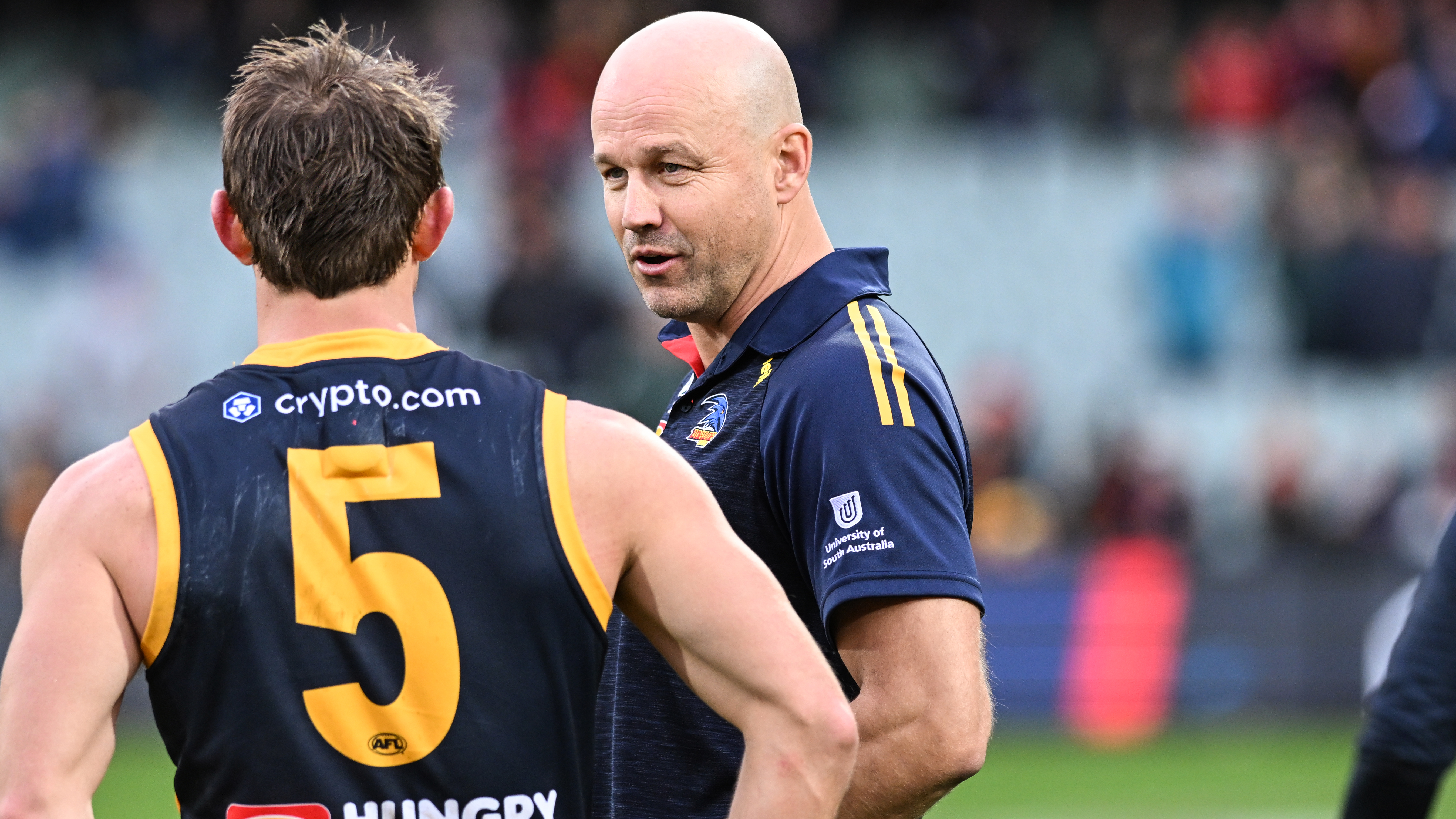 And with Gold Coast and the Roos to come, there’s still the chance that, as Frankie said, we’ll be back on top in June. And certainly, if there’s nothing shakin’ come July I’m gonna roll myself up in a big ball and die.

But for now, it’s time for muted celebration. For we didn’t lose against one of the worst sides on record.

And that’s the best thing that’s happened to us in weeks.

Touch of the Fumbles is InDaily’s shamelessly biased weekly football column, published on Mondays during the AFL season. It will return after Adelaide’s bye.