Those vast, unanswerable questions that float through the collective subconscious like bubbles, ever-intriguing yet unable to be grasped.

For instance: is McPherson going to be an A-grade AFL player?

Why has Hamill gone backwards this year?

(My personal theory is that he’s like Samson, who lost his distinctive powers after cutting his hair.)

Or the big one: can Nicksy coach? 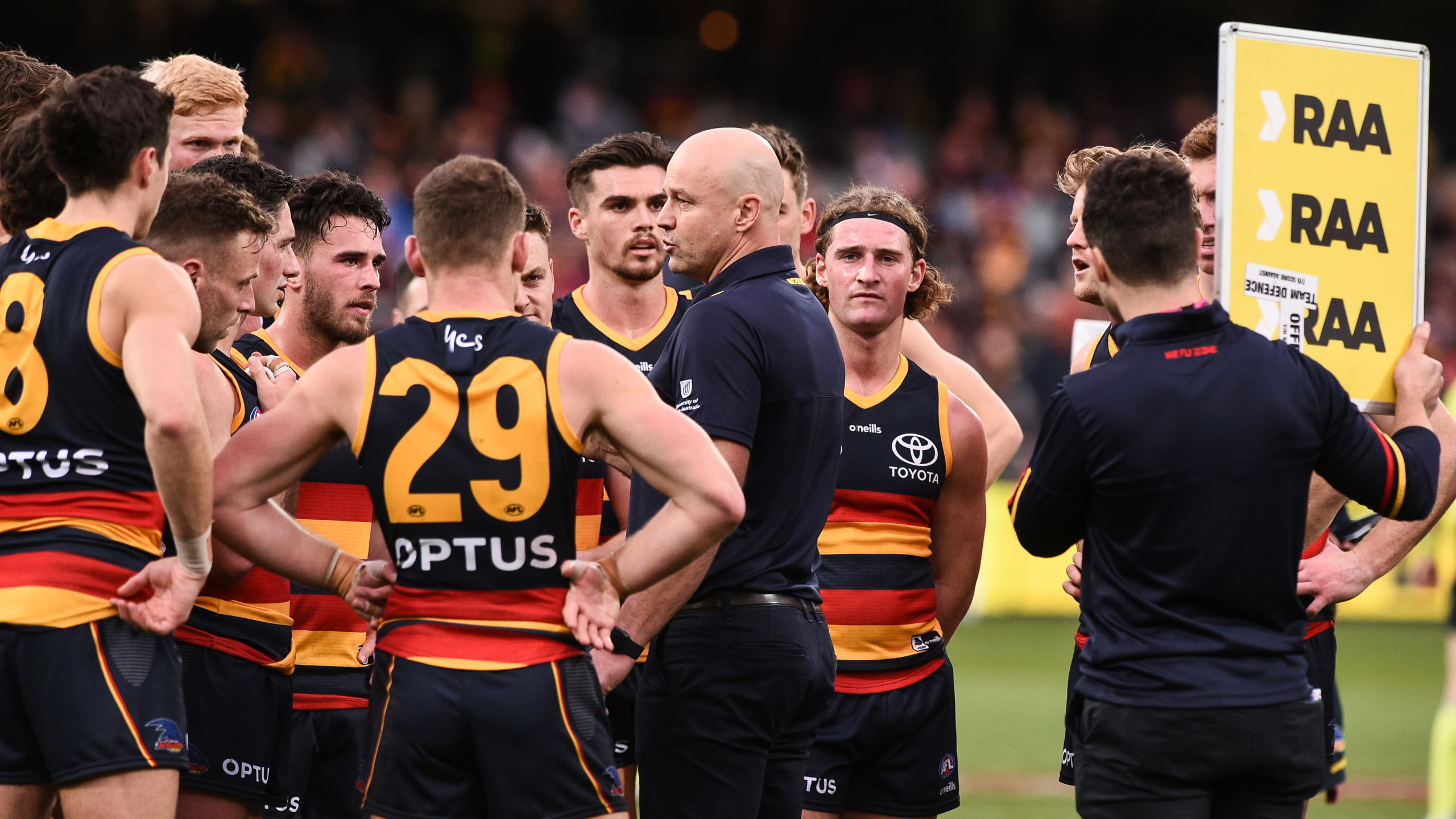 Not even the RAA could get the wheels back on in the second half. Photo: Michael Errey / InDaily

I mean, sure, it’s always a fun experiment to hand a fledgling first-year coach the worst side in the AFL and try to get a handle on their tactical nous, but for now the question – like all the others – will remain one of life’s intangibles.

Or perhaps, for now at least, we have to judge Matty Nicks’s winning record like we judge Ned McHenry’s possession count.

That is, on quality rather than quantity.

On which point, I’ve waited patiently for almost two years now for McHenry to play an unambiguous breakout game and I am starting to ponder the possibility that it may never come.

But then, I don’t quite get what our go is with McHenry.

What is he meant to be exactly?

Or a midfielder who doesn’t get the ball?

When he was drafted he was sold as a tackling machine who never stopped running; maybe then he should be getting gigs running with, for example, Andrew Gaff, who helped stitch us up yesterday with 34 touches from the midfield, while Ned floated around the half-forward line getting outmarked.

McHenry and Chayce Jones, of course, bear the relative curse of being Adelaide’s two first-round selections from the 2018 ‘super-draft’, from which almost every top echelon pick has already stamped themselves as a future star of the competition.

Except, of course, for McHenry and Jones.

The latter of which is currently plying his trade – entirely competently, mind you – in the back pocket, after stints up forward, on the wing and in the centre square.

Of course, not being a future star is all well and good.

The AFL is full of handy players who are not actually stars.

But given that nine of that year’s top 10 picks include Sam Walsh, Jack Lukosius, Izak Rankine, Max and Ben King, Connor Rozee, Bailey Smith, Tarryn Thomas and Nick Blakey, and that Port picked up Zak Butters at number 12, one could legitimately ponder whether that draft wasn’t our proverbial ‘sliding doors’ moment.

And that we’re the Gwyneth Paltrow who opts to stay with her slimy boyfriend Gerry, thus dooming herself to a lifetime of misery.

Of course (spoiler alert, although to be fair you’ve had 23 years so if you haven’t seen it by now you’re probably never going to) that also means if we’d done things differently we might still end up being hit by a van in any case, so swings and roundabouts.

I guess the moral of that story is that it’s worth waiting a few years before writing off the entire storyline. 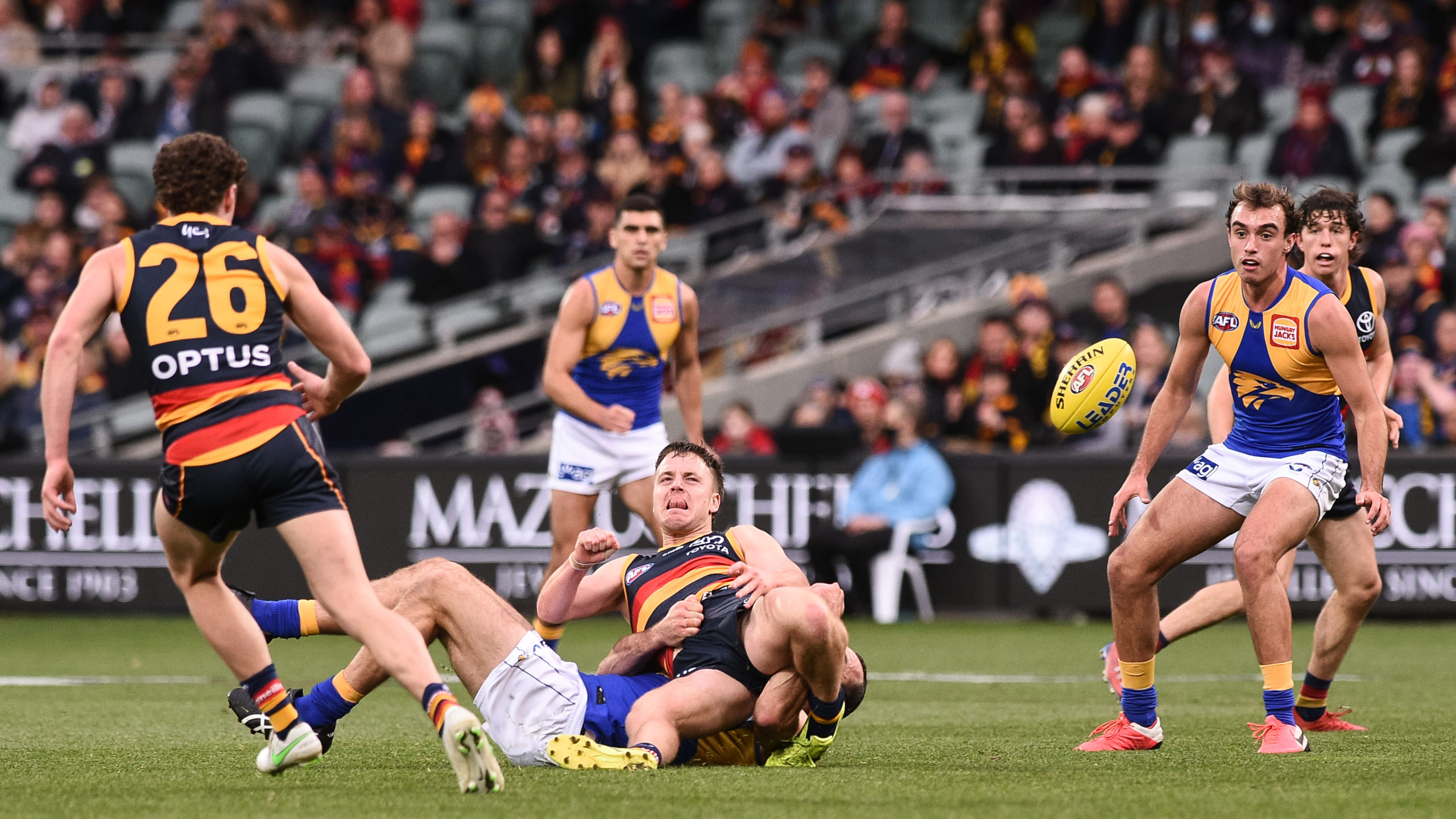 James Rowe was billed as a prolific goal-kicker but plays higher up the ground for the Crows. Photo: Michael Errey / InDaily

After all, as the Chayce Jones saga shows, if at first you don’t succeed, just keep playing in different positions until you find one that suits.

Which is apparently what we’ve now done with poor old Billy Frampton, traded from Port as a key forward and pinch-hitting ruck, but who at AFL level lacked one of the defining elements of the key forward role, ie kicking goals.

He went back to the reserves this week, making way for Elliott Himmelberg, presumably under some team rule prohibiting the confusing selection of two white-blonde mobile ruckmen in the one forward line.

Instead, after a brief sojourn in defence in the dying stages of our recent loss to Essendon, Billy played down back in the SANFL in the weekend.

And work it did, given he amassed a team-high 31 touches, including 20 kicks.

Mind you, the notion of another key defender might not have sat so well with our 2019 first-round draftee Fischer McAsey, who has spent the entire season in the reserves backline and still hasn’t managed to break into the senior team.

Still, no matter: having put the full forward to full-back, McAsey was swapped deep forward, where he kicked two goals from limited opportunities.

Which means we may have somehow solved two issues in one fell swoop.

Anyway, I digress, but this is kind of my point.

In the absence of the sort of thing that used to occupy my thoughts at this time of year (how many wins we’d need to make the top four, who we wanted to avoid playing in the finals, that kind of stuff), I’m instead reduced to pondering the form of guys who don’t even play for Adelaide’s AFL side.

And instead of pondering how many wins it will take to reach the top echelons of the ladder, I’m calculating how many losses we’ll need to enter serious number-one-draft-pick calculations (the answer: we have).

Not that I’m advocating being strategically bad, but if you’re going to be bad anyway you might as well maximise your opportunities while doing so.

Still, it’s not much fun being routinely humiliated by middle-ranking teams.

Yesterday’s game began as blandly as a showcase of the two non-form teams of the competition was probably always destined to, before West Coast powered away in the second half.

Which is awkward, given the same side had lost to the bottom-placed Kangaroos at home the previous week.

Mind you, we were always up against it, playing the Eagles at their Adelaide Oval fortress.

And at the end of the day, we just had more to Not play for. 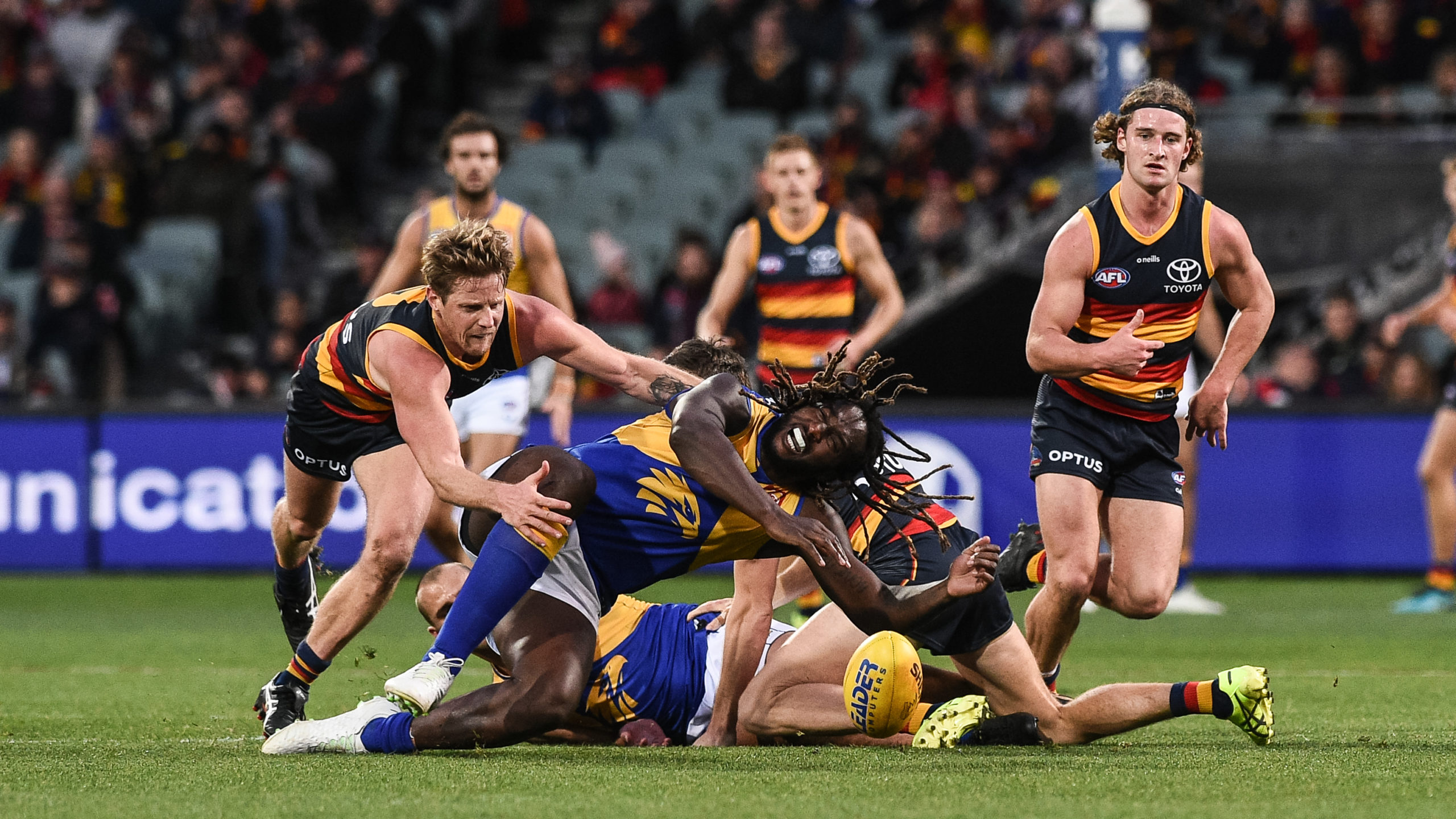 We have reached that point in our life cycle where the draft is our new Grand Final.

And it’s entirely possible we’re performing much as we did in our last actual Grand Final, but the thing is: you won’t know.

It’s like catching those bubbles: there are too many intangibles to be able to truly grasp things.

We can look at top-tier draft picks starring for other teams and wonder ‘what if’, but there’s no guarantee those same recruits would be doing those same things if we’d drafted them.

Indeed, it’s entirely possible we’d have somehow ground down their confidence or thrown them into random gap-filling roles, and we’d be having much the same conversation.

Because watching Adelaide these days is kind of like waking up one day to find you’re living in some bizarro parallel universe.

There are still players wearing familiar guernseys with familiar numbers on the back… but in the space of a few short seasons the faces have changed completely.

After all, we’re going through a sudden and violent regeneration here.

And like in Doctor Who, the net result is an entity that, while nominally the same, looks nothing like it did mere moments before, and will likely flail about eccentrically for a while before it can re-establish some semblance of competence.

Don’t get me wrong.

I’ve been all-in on the so-called rebuild.

I’ve managed to convince myself that taking one of the best sides in the competition and somehow managing to turn it into a complete and utter basket case within two short years was clearly The Way To Go.

For once you accept that yours is not a premiership list, it’s surely better to go hard at the draft than to persist with being perpetually Almost There, as we have for more than two decades now.

The thing is, though, the strategy necessarily means you’ll spend a period of time being egregious – and we just have to take the proverbial leap of faith that the guys running the show know what they’re doing.

And given they’re by and large the same guys who got us into this situation in the first place, that leap of faith increasingly feels destined to end in much the same way as Nick Murray’s crazy-brave (with the emphasis very much on the former) marking attempt in yesterday’s home-ground capitulation.

Nonetheless, there’s something refreshingly unfamiliar about watching a young team with few expectations, and enjoying their small moments of promise and improvement.

We’ve seen some genuine talent emerging this year (with Butts and Schoenberg the unexpected standouts) and enjoyed some of the best wins we’ve ever had (against Geelong and the Demons specifically, and our last victory against St Kilda was one of our biggest ever comebacks).

But at the end of the day, they’re three of only five wins for the season thus far, and we’re looking less and less likely to add to that tally.

And as the losing margins grow ever greater, one can’t help but lie awake at night sometimes and ponder the big issues of the age; those vast, unanswerable thought-bubbles.

Will Newchurch ever do enough to get a game?

Will someone, someday, say ‘I told you so’ about all these kids who suddenly occupy guernseys we still identify with those fast-fading memories of former champions.

Assistant coach Scott Burns told SEN radio the other day that the main aim of the next few weeks is “to make sure that we finish the year on a high”.

I’d settle for finishing it on a high draft pick.

But on the strength of yesterday, perhaps that’s what he meant in any case.