If, at any point in their proverbial premiership cycle, your chosen team gets itself into a bit of a funk, is struggling for form and can’t seem to find a way to recapture it, allow me to make a suggestion.

May I recommend they consider playing my team, the Adelaide Football Club aka the Crows?

Because we have a proven and consistent track record of playing struggling sides into form.

If, for example, a number of your high-priced, high-profile recruits are copping a media barrage for failing to live up to expectations – just send them our way!

We’ll make them immediately play like world-beaters, for whom whatever price you paid was a shameless bargain.

If any of your veterans have been struggling in the shadow of their former selves, we can ensure they once again play with all the skill, zip and – yes – confidence of their finest heyday.

So don’t delay: if you’re stuck in a football rut, simply check your fixture and circle the date on which you next play Adelaide.

We guarantee that’s the day you’ll rise from the malaise.

Because I’m not just making this up, surely. There are plenty of examples, both recent and long distant, of the Crows playing struggling teams into form.

I reminisced unhappily earlier this year about that time in 2007 when we broke Melbourne’s nine-game losing streak, despite then sitting comfortably in the top quarter of the ladder.

Before that, of course, came that time we qualified for the major round of 2001 only to be rolled by Freo (1-20 for the year at that point) on the eve of the finals.

And more recently, when we fronted up against North for last year’s wooden spoon playoff. Granted, we weren’t in great form, but could at least have expected a desperate tussle, instead of a 12-goal drubbing leavened only by the fact that their final score of 119 was wistfully amusing. 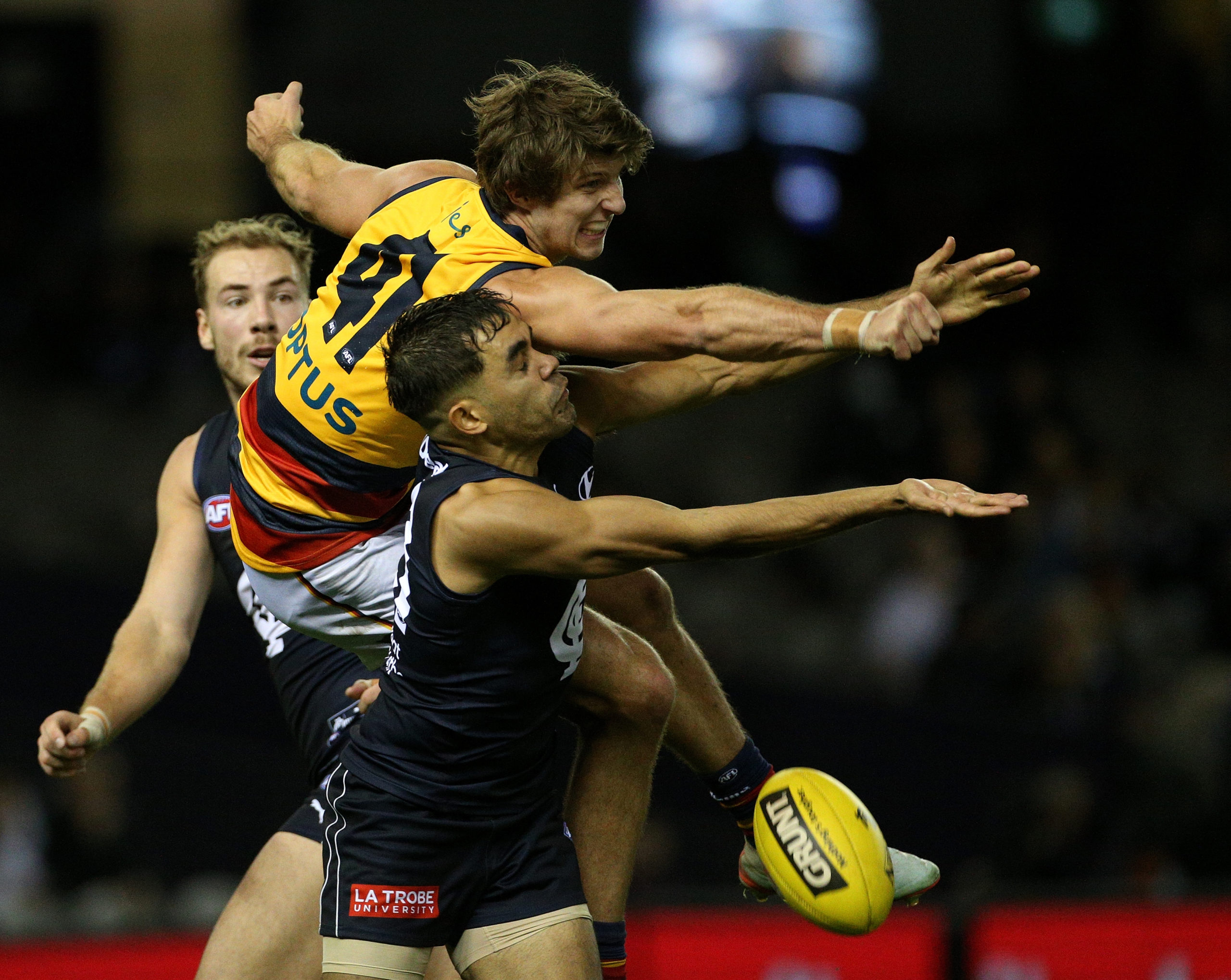 Jordon Butts gets a fist somewhere near the ball. Photo: Hamish Blair / AAP

Still, let’s not get carried away here.

Sure, it was annoying to drop our bundle briefly in a winnable game, particularly on the back of one of our better comeback victories. But in the end, we lost narrowly to a side in the same stretch of the ladder, playing on their home deck.

Which is hardly the end of the world.

But this is the intriguing thing about Crows this season.

On any given day – and particularly on days when we play a side we have a right to contemplate beating – I genuinely have no clue whether we’ll come out and dominate, or completely stink it up.

Or even, as is so often the case these days and was again yesterday:

It started well enough: poor goalkicking squandering a first-quarter dominance set to the enjoyable soundtrack of Carlton supporters repeatedly thinking they’d got a free only to realise that we got one instead.

But an eight-goal Carlton frenzy in the second term effectively put the game beyond doubt – even if we had our chances to wrest it back.

And this is the point about the Crows, or the Adelaide Psychos, as we should probably call them for the time being.

It’s not that we’ll necessarily play consistently badly, or even lose the game.

But right now, like those infuriating ‘Yo-Yo’ years under Sando the Snake-Oil Salesman, we never know what we’re going to get – apart from an unfailingly uncanny knack of making our opponents play better than they had been in the preceding weeks.

Against the Giants, for instance, who had lost four of their first six games when they jetted into Adelaide and towelled us up by a frankly ridiculous 67 points.

I mean, sure, there were mitigating circumstances this week.

Carlton had been roundly bollocksed in the Victorian and national media, and moreover had begun publicly acknowledging the poor fitness and performances of some of their star recruits.

They’d even begun their own internal review of why their season – still only two-thirds played out – has been such an underwhelming failure yet again. Kind of a post-mortem, except the body’s still alive.

A move that inevitably bodes badly for the man in charge.

But yesterday, it was evident that the players were really playing for Teague.

Even some of the Carlton ones.

Cripps, fresh off a six-year contract extension, had a newfound spring in his step – which he proved by running half the length of the field without a bounce to kick a momentum-seizing goal.

Sure, some might argue a free kick should have been awarded to us, which might have broken the Carlton onslaught and changed the game somewhat; but that would be against the AFL’s present adjudication policy.

We saw it again last week, incidentally, when the league sent poor old D-Mac to the tribunal seeking a three-week sanction for an on-field act that wasn’t actually against the rules, but felt like something they’d like there to be a rule against.

The case became a national cause celebre among football followers, ensuring that even on our bye week, David Mackay’s selection remained, as ever, a hot topic on a Thursday night.

There was much rejoicing when he beat the rap, which meant vocal Adelaide supporters could stop being outraged about his prospective suspension and resume calling for him to be dropped.

The AFL, for its part, was unapologetic about pursuing the sanction, with football boss Steve Hocking declaring the league “will not hesitate to take action where the health and safety of players is impacted or at risk”.

He also flagged potential rule changes at season’s end – which technically is hesitating, but whatever.

The main thing is that D-Mac, easily the most talented and durable of Adelaide’s long list of historically-maligned players, was free to provide his 14 touches and three tackles against Carlton yesterday.

I wouldn’t go so far as to say I don’t understand the flak that D-Mac cops from his own side’s fan-base.

It was in part his knack for comically capricious flights of fancy, my favourite of which remains the moment in 2016 against North when he earnt a free-kick from a tackle in defence, and opted to chip it backwards to a loose Jake Lever on the last line. Unfortunately though, the laconic regulation pass sailed over the Snake’s head, ending up instead with a bewildered Lindsay Thomas – the only Kangaroos player for a mile goalside – who slammed home the easiest of his team’s ten goals for the day.

Beyond that, the reasons for the chagrin that has dogged D-Mac’s career are less clear: Ricciuto himself arguably kicked it along in 2013, when he declared in one of his many helpful media forays that the speedster was “starting to enter the frustrating category”.

Beyond that, I’ve always suspected his 30-possession ‘breakout game’ against Collingwood in that hideous 2009 semi-final actually kinda doomed the guy.

Given the stage, it was seen as the benchmark against which he would thereafter be measured – rather than for what it was: an out-of-the-box, Shane-Ellen-style finals anomaly.

To be honest, for a guy drafted at pick 48, the bloke’s provided far, far more than we’ve ever had a right to expect, and at this point we should be celebrating every moment of what’s left of his career.

Even the comically capricious bits. 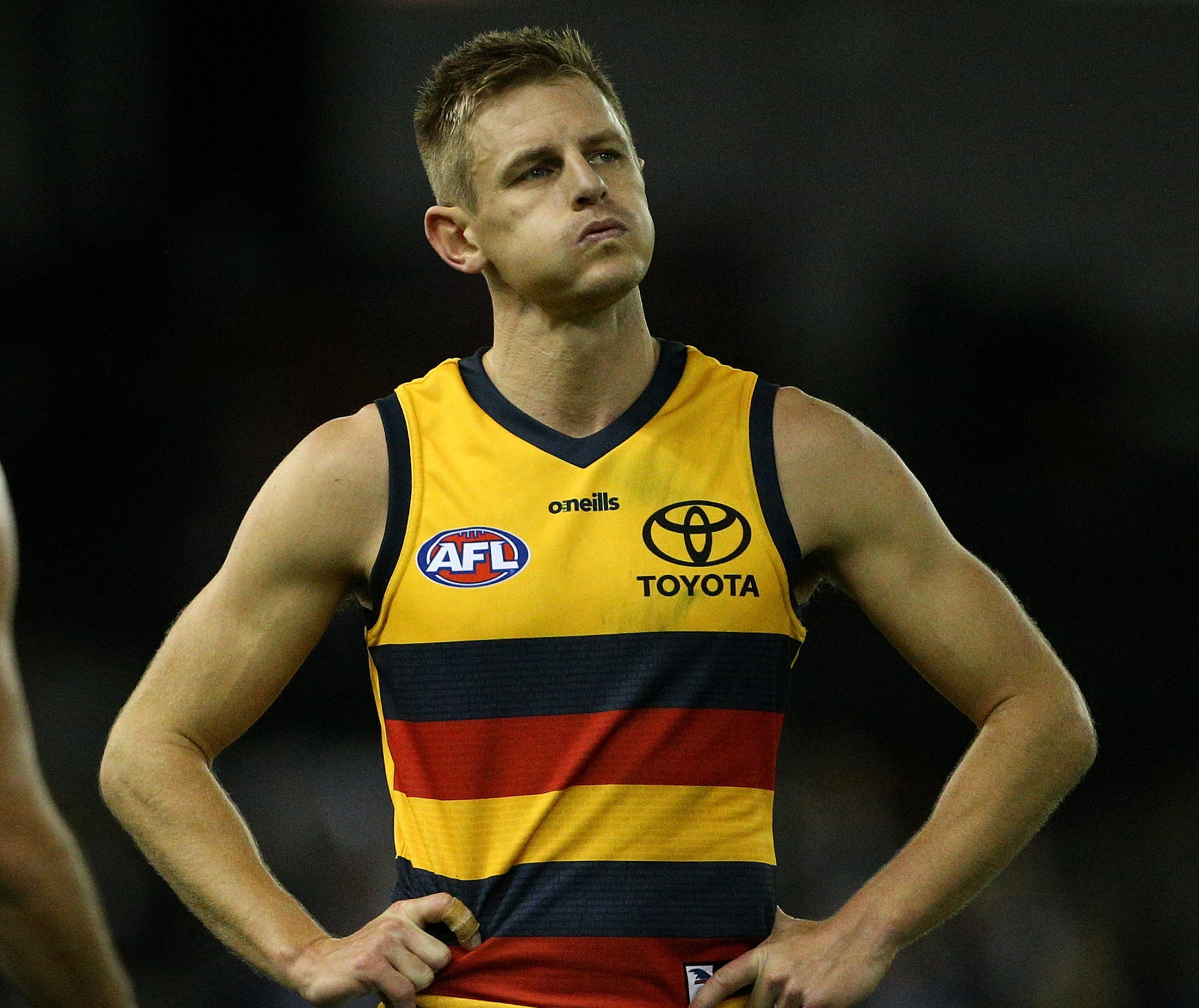 DISAPPOINTED D: Mackay rues not getting the week off. Photo: Hamish Blair / AAP

Because while losing to Carlton might not have been the end of the world (although it certainly put a line through any lingering hopes of an unlikely finals charge that the most ludicrously optimistic among you might still have been harbouring), at least we made ‘em earn it, I guess.

And there’s a part of me – not a very big part, I’ll concede – that sort of wants the Blues’ blue era to finally end someday soon (as long as it doesn’t involve McGovern getting anywhere near a premiership, of course).

Because it occurred to me recently that if our rebuild takes as long as Carlton’s has, I may well not live to see the end of it.

And that’s ever so slightly depressing (not least because it’d also mean writing this column for the rest of my life, and I’d probably run out of Simpsons gifs at some point).

Of course, the signs suggest our rise from the proverbial ashes is tracking along ok for now,  and we’re unlikely to fall into the Carlton trap of being abominably bad for two straight decades, save for a trio of go-nowhere major-round appearances in the late noughties and one year where they finished ninth but played finals anyway, and ironically even managed a win against the team that at that point traditionally finished ninth.

But there are some sides that mediocrity simply clings to like Glad Wrap.

Gold Coast, for example. I had the misfortune of having to barrack for them a week or so ago for the occasion of their match against Port (who, annoyingly, are back in the top four and, given their butter-soft draw will probably remain there from here on in).

I’d been following the Suns for almost three quarters of that one game before I wanted them to fold – imagine supporting them for ten years or whatever it is! 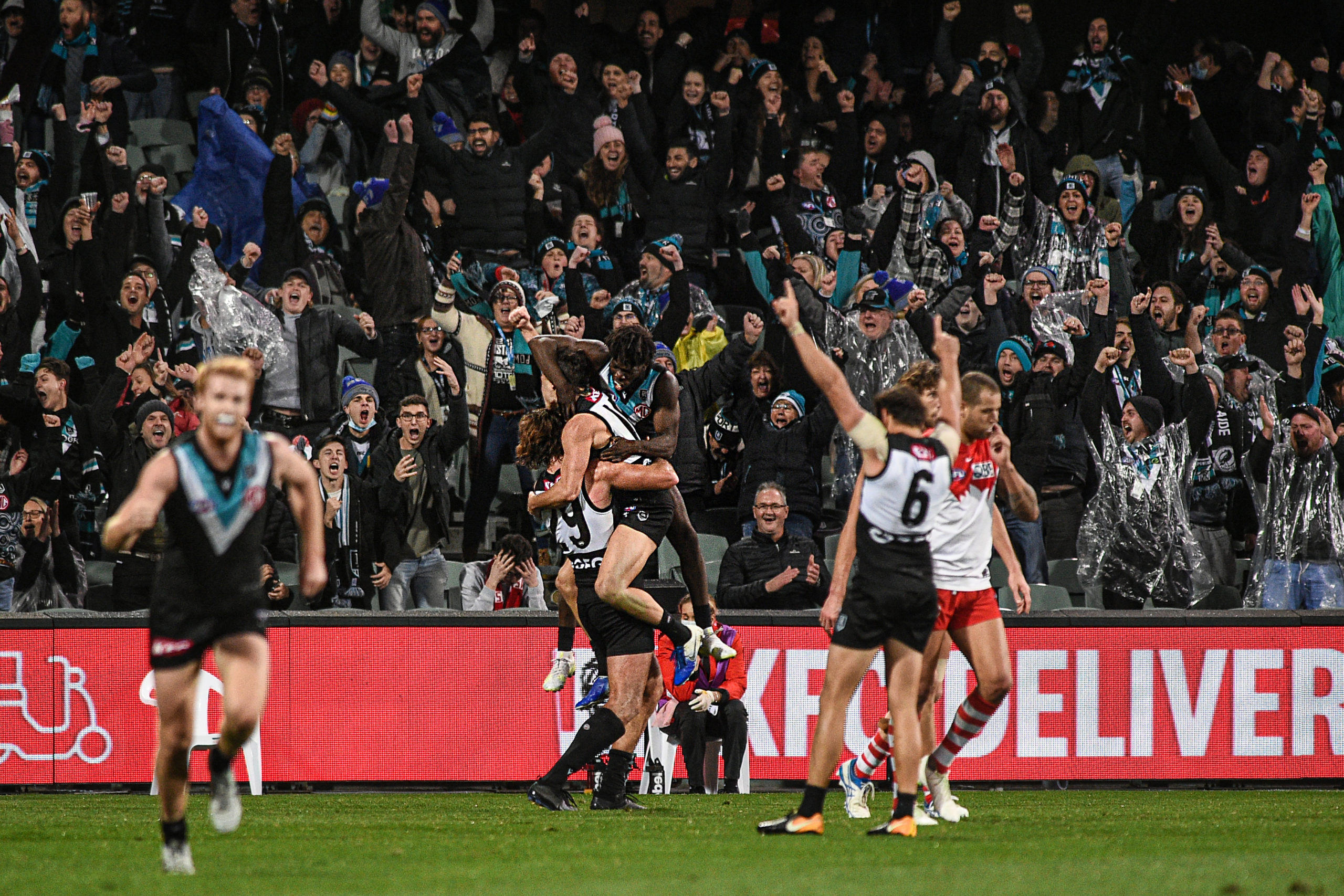 It always amuses me to think of the club’s rationale when it sacked Sando the Snake-Oil Salesman after that 2014 season – that “mediocrity is unacceptable”.

And yet, with no flag in 23 years, we’re really the epitome of a mediocre side.

Sure, we’ve been up and about a fair bit in that time, but without a premiership to show for it, you’re just talking about degrees in the middle of the road.

So that’s why I’m largely unfazed about what happened yesterday.

Sure, winning and playing finals is the aim – but we’ve done plenty of that, and frankly – if you know you’re not in the premiership hunt, what’s the difference?

If anything, this year shows that we’re an improving side still a handful of top-line players away from a genuine rebuild.

So don’t feel too blue about the Blues beating the Adelaide Psychos: if nothing else, it keeps us deep in the draft for now.

And the alternative was merely another mid-table finish.

Which, to be frank, we’ve seen plenty of times before.

And if I recall correctly, it’s overrated.