It’s always frustrating when your team puts in their all only to come up heartbreakingly short.

Thankfully, then, we can actually find ourselves quite sanguine about the Crows’ performance on the weekend, since they evidently put in no effort whatsoever.

It was as if the frustration of the previous two weeks – in which the team had collectively fought things out but was still found wanting – manifested itself in a bold new approach.

Still, at least Himmelberg managed three goals – even if they were all for GWS.

(His brother, who plays for us, managed three kicks, which is nearly as impressive.)

And it was nice to round out our 2021 trilogy of ‘Disastrous Play-Ons from Free Kicks In Front Of Goal’, after Shane McAdam managed to turn a rare highlight – a tackle and free kick in the forward 50 – into an egregious self-beclowning by sprinting into goal and missing.

I mean, sure, I’d been hoping Adelaide would carry on with the form we’d seen the previous week against Hawthorn – but I’d ideally meant the bit where we played stupendously well and didn’t miss any goals, as opposed to the bit where we hardly scored at all and let a fellow lower-ranked side run riot.

And to think the week started so full of promise, with the surprise re-signing of our one-time highest-ever draft pick, Fischer McAsey.

Given reports the kid was all but certain to head home to Melbourne at season’s end, this was arguably Adelaide’s biggest contract coup since McGovern in 2017… um, Dangerfield in 2010… er, no. Tippett in 2009?

Well, anyway, let’s just say it bodes well and nothing can possibly go wrong from here. 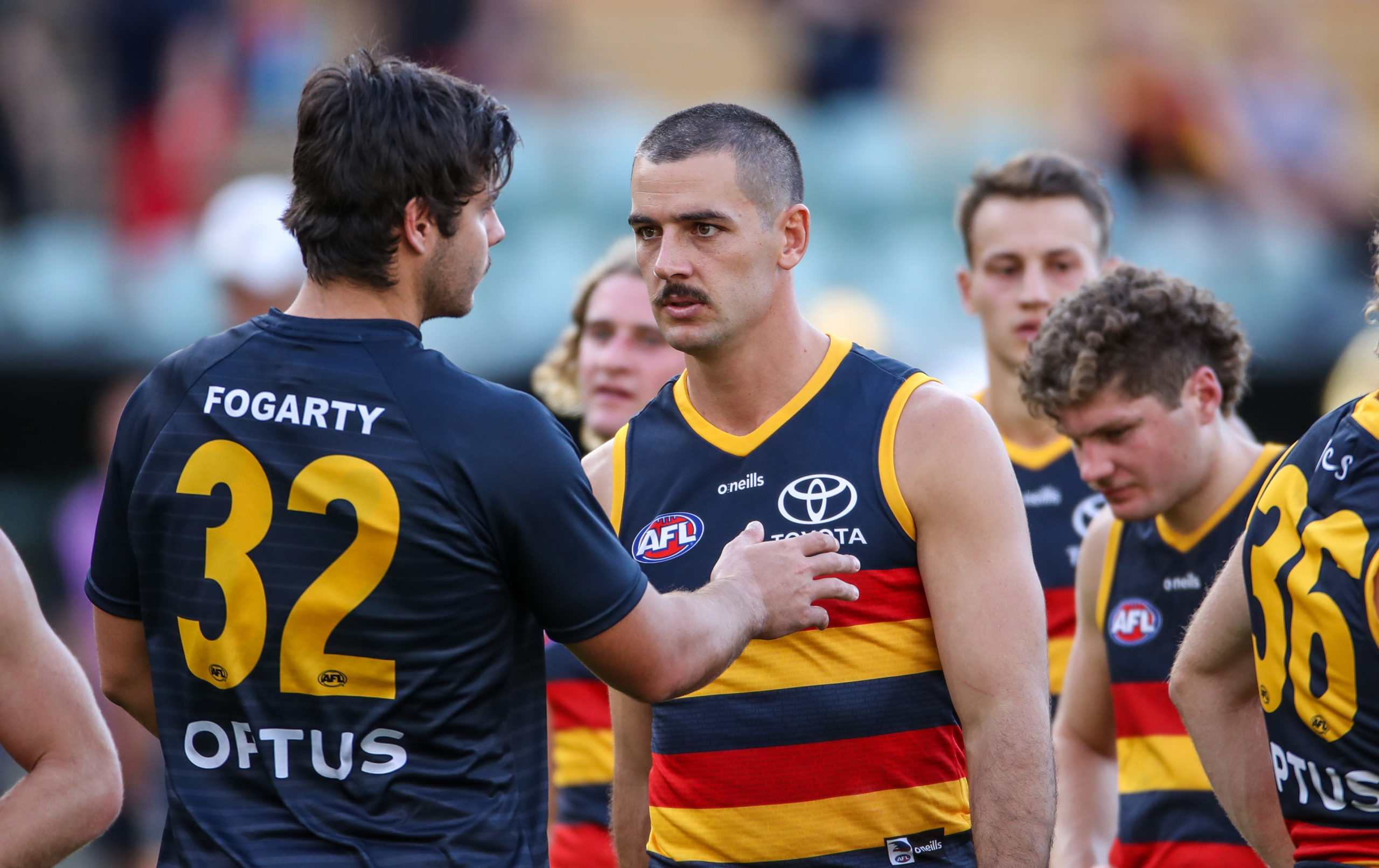 “Don’t take this the wrong way, but I’m glad I wasn’t out there.” Fogarty consoles his teammates post-match. Photo: Matt Turner / AAP

In fact, so unusual and profoundly symbolic was the fact we’d retained a draftee widely expected to leave, I quite forgot that we’re still not sure whether the guy’s going to be much of a player.

But perhaps the strangest part of McAsey re-signing when he did was that – whisper it – Mark Ricciuto was right.

Anyway, with the Fish still swimming against the tide in the reserves and our new (but, sadly, not necessarily last) highest-ever draft pick Riley Thilthorpe turning in a largely highlight-free 10-possession game in our thumping loss to GWS, last week’s optimism about our bright future had dissipated somewhat by Saturday arvo.

To be honest, if it weren’t for Port getting thumped by Brisbane later that night, I might have been really quite despondent.

It was a timely trouncing too, given I was this close to declaring 2021 Port’s year.

They were just starting to look too damn sturdy, too reliable, too hungry, while fellow pre-season contenders began to fall away.

And then, all of a sudden, the Power get on a plane and they’re like:

So predictable and catastrophic are Port’s interstate losses becoming, I can almost imagine the team being greeted at every away venue by the generic old guy from most standard horror films who warns the protagonists about the impending bloodbath.

Still, I may not have this quite right, but won’t they have to play interstate in order to win a premiership?

They might want to think about that one, because their current ‘road trip’ strategy seems to overlook that fairly glaring loophole.

Still, both sides should probably reconsider that approach ahead of this weekend, when they play each other in what looms as the most one-sided Showdown since the last one.

Port, predictably, are short-priced favourites – even if the price itself is amusingly ominous.

The game, of course, was already front of mind in Adelaide last week, with Port seeking AFL permission to wear the club’s ‘traditional’ black-and-white ‘prison-bars’ guernsey for the clash, and the AFL responding to the request in its usual timely manner.

And given Port president David Koch had already fired off an angry missive about how long the decision was taking, the actual decision itself – barring the bars in future games – was always going to unleash the kind of uniquely South Australian furore we only see when the words ‘heritage’ and ‘guernsey’ are uttered in the same sentence.

I, for one, was stunned when the AFL handed down its verdict, as it was the first time I’d actually noticed that they don’t do heritage round any more.

For the record, I’ve got no issue with Port wanting to celebrate its supporters’ long history with prison bars and traditional engagement with the penal system in general.

And I’ve previously stated that I see no issue per se with them wearing their SANFL guernsey in a home Showdown if they want to.

If Port want to dress up like Collingwood, let them, I say.

After all, there’s an obvious argument that they’re being dudded by the Victorian-centric strictures of the AFL – wherein the league would rather pander to a vocal Collingwood supporter than a finals-bound South Australian club – and that we have a parochial duty to at least empathise with their plight.

But then, on the other hand… if we can’t enjoy Port being hard done by, spitting the dummy and then abjectly capitulating, what can we enjoy?!

And their defeats are invariably sweeter when they follow a week of them puffing their proverbial chests out.

Honestly, though, I haven’t seen such a fuss made about an outfit since the Oscars red carpet.

I remember once, when I was a little kid, going for a train ride with my grandparents, and I refused to take my woollen jumper off, despite the fact it was about 43 degrees that day.

My granddad ended up telling me in no uncertain terms that I wasn’t allowed to wear it, and I was eventually forced to make do with a long-sleeve shirt instead.

So I can kinda relate to people throwing childish tantrums over inappropriate attire. 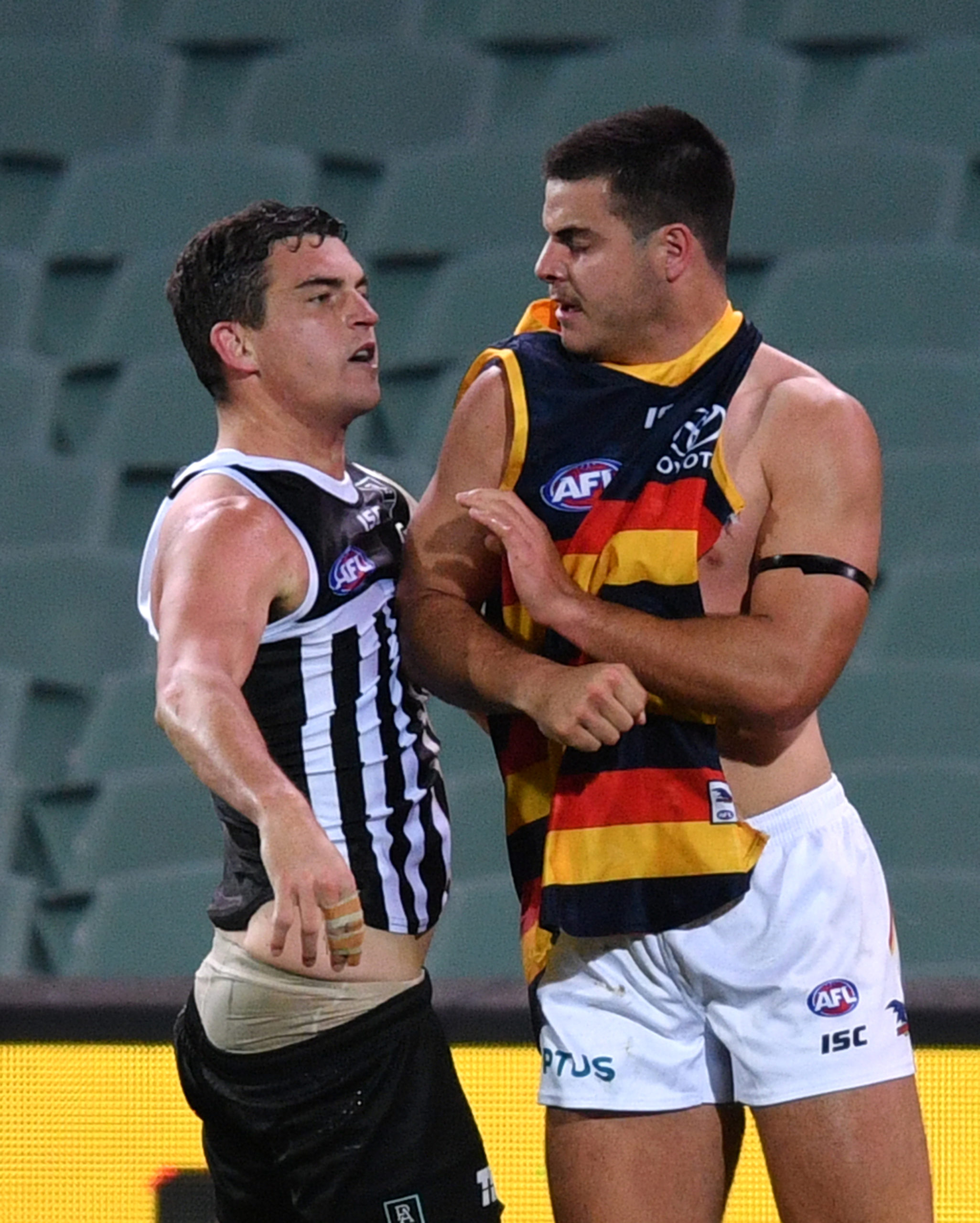 They certainly like it now a lot more than they seemed to in 1997. Maybe they’re keen to ensure the Magpies guernsey is entrenched in the AFL in case their state league side ever joins a national reserves competition – and it may never be worn again.

But look, never let it be said that we’re not solutions-oriented here at Fumbleland, or that we’re too blinkered to help our fellow SA footy supporters in their time of trial.

So in the spirit of football parochialism, I propose a compromise: why don’t Port just wear the prison bars in teal, and have a fight with North Melbourne instead?

You’d still get your prison bars, and the Kangaroos would probably fold faster than Superman on laundry day in a public stoush.

Failing that, I’d be more than happy for them to celebrate their history in any number of other ways, such as by donning this classic jumper from the early-2000s. 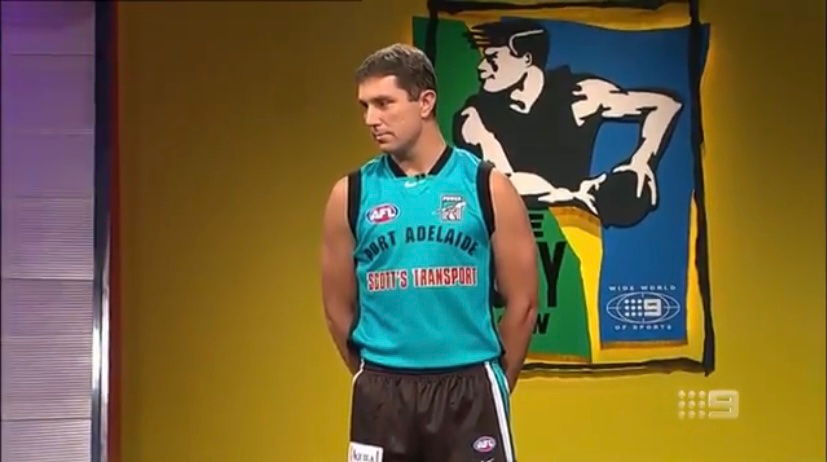 They’ve definitely Earned The Right to wear it, as they tend to say. 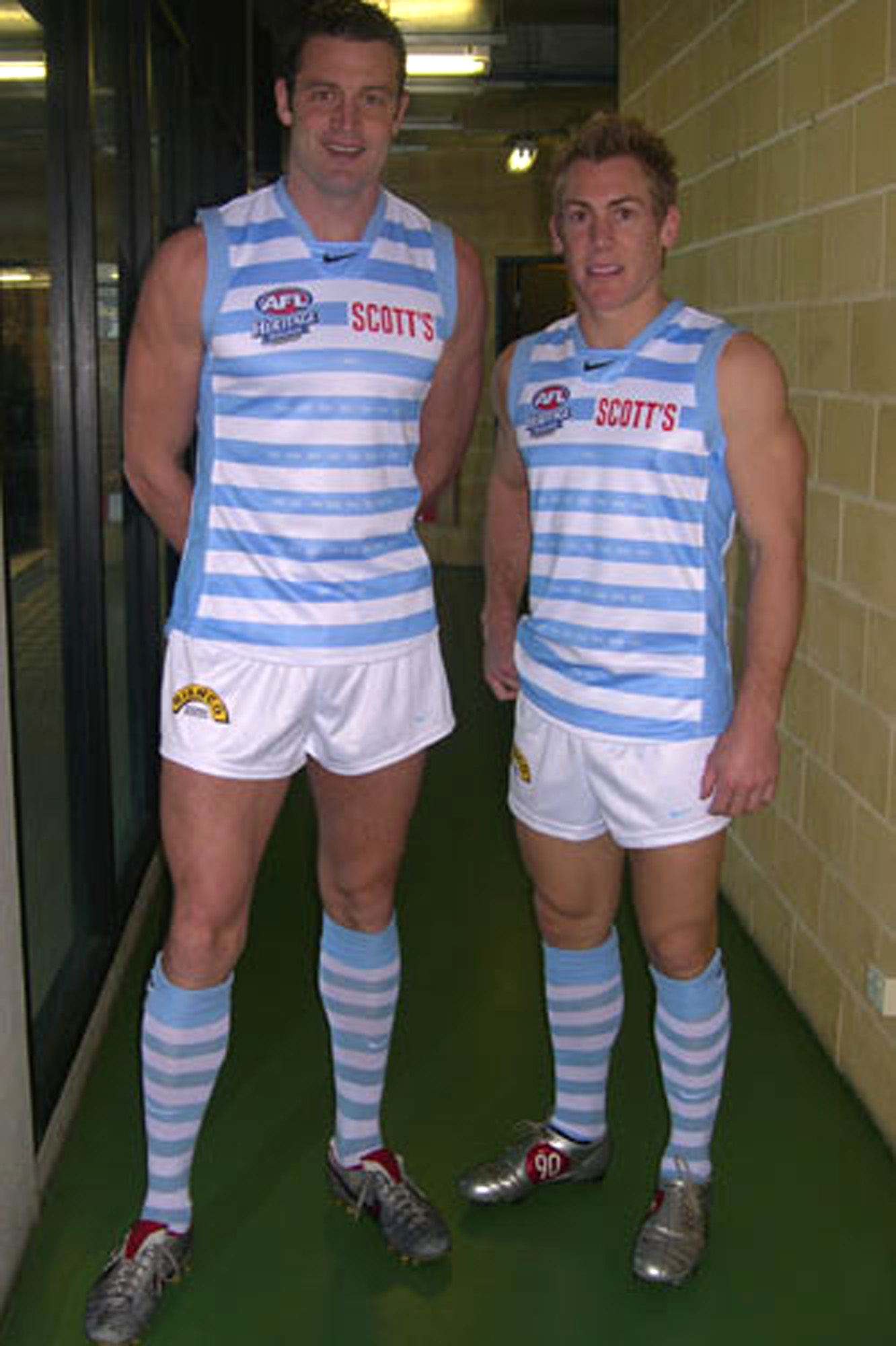 Well, as long as they’re not playing the Cats maybe. Photo: Port Adelaide FC via AAP

Anyway, the point is, Port should absolutely keep fighting this one.

In fact, to show how serious they are, they probably should don the prison-bars for the Showdown anyway, and cop the four-point sanction.

It’s just the Right Thing To Do.

After all, there’s a principle at stake. I’d even be happy for my team to magnanimously accept the four points on their behalf, as a sign of solidarity.

In any case though, they should definitely keep talking about their SANFL guernsey for the rest of the week, and ideally the season.