I’m not even really that mad.

I mean sure, when your team kicks TEN GOALS STRAIGHT in a single quarter, and 15 goals without blemish in just over a half of football to take a 32-point lead, you might tend to presume that an eventual win is on the cards, mightn’t you?

But then, if you did, you clearly haven’t been paying attention, because not only was the Crows’ Anzac Day collapse entirely predictable – it was basically the symbolic epitome of everything the club has achieved so far this millennium.

Long periods of dominance, stanzas of breathtaking brilliance that send our optimism soaring skyward like Shane McAdam flying for a towering mark.

But, in much the same manner as many of McAdam’s Mark Of The Year attempts, it ultimately all comes crashing down with nothing to show for it.

And, like our team’s net output from the Y2K era onwards, the excitement and hope is ultimately swamped by frustration and disappointment as we are left to rue our opportunities lost.

So, in some ways, this game was really the ultimate expression of what it means to follow the Adelaide Football Club post ’98.

Sometimes our club takes a whole season – or even a few years – to give us the Tucker’s Daughter treatment (ie building us up just to tear us down).

At least on this occasion they managed it in the space of a mere four quarters.

But the thing is… none of that matters.

Not today. Not this time.

Because while Sunday’s display might have been the perfect encapsulation of the past 22-and-a-half years, it wasn’t really about the past at all.

Because at last – at long last – I’ve seen the future.

Yes, well you might argue, the future is presumably just my team promising great things only to ultimately let me down – which is really much the same as the past.

But the future I’m referring to in this instance is Riley Thilthorpe.

Inventive pun-based nicknames are, after all, one of Australian football’s greatest gifts to society. After Port’s depressingly comprehensive win over the happily hapless Saints on the weekend (really, expecting St Kilda to salvage the worst round of the year was always a long shot, but no matter) I heard Orazio Fantasia mention in an ABC radio interview that defender Aliir Aliir’s nickname was ‘Chand’ Aliir – which, frankly, is perhaps the finest nickname of its type since the ‘Ma-Sheen’/‘Malkatrazz’ bro hug scene in Being John Malkovich. 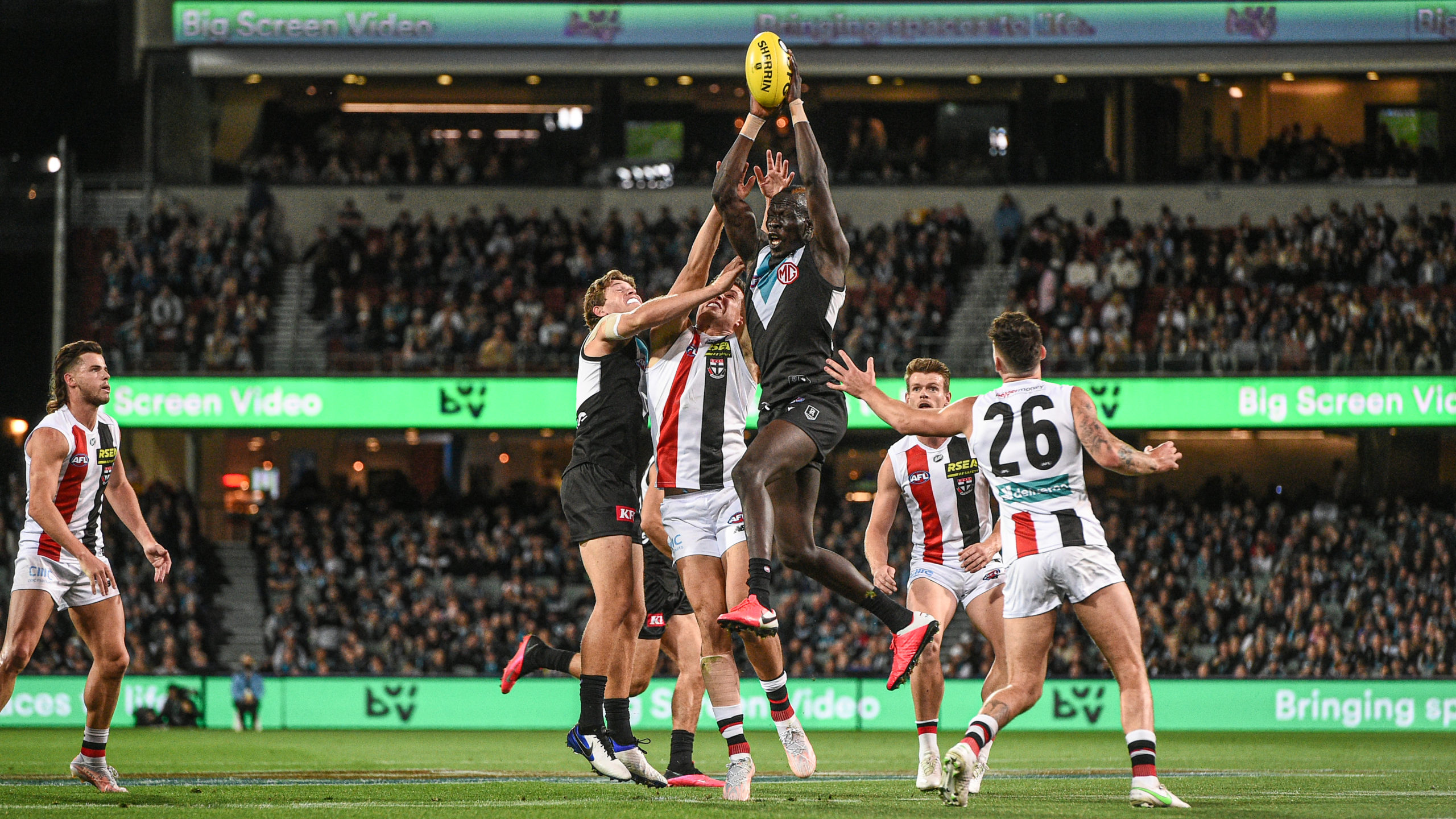 Fortunately, it transpires the moniker has followed him from his Swans days, so I don’t need to give Port any credit for it.

But whatever you choose to call our 201cm Number 7, his debut was one for the ages – the highest-scoring debutant in club history.

Which is even more remarkable when you consider he’d hardly been setting the world on fire in the SANFL, with just two goals to his name from three games.

So it was a surprise call-up then, for our highest ever draft pick – Number 2, after our maiden wooden spoon aptly enough fell in a year in which the Western Bulldogs already had a mortgage on the draft’s most highly rated prospect.

So hopes were duly tempered.

I’d reminded myself that St Kilda great Nick Riewoldt’s own debut in 2001 as a tall forward taken at the top of the draft was unsuitably underwhelming – a mere three touches in a 97-point loss. To us, as it happened.

As an aside, it was also the return match from a three-year injury layoff for Saints utility Jason Cripps, who snared the game’s opening goal with his first kick, thus in effect denying us a three-figure margin.

It’s worth noting that Cripps, clearly a graduate of the ‘Dish Best Served Cold’ School of Revenge, bided his time to exact his retribution for the defeat – which he achieved a full two decades later by becoming the list manager at our hated cross-town rival and doing an obscenely competent job.

Anyway, I digress (if merely to remind myself that there was once a time when my team won games by 97 points).

The point being: I didn’t put high expectations on Thilthorpe’s debut.

This, after all, was our long term prospect. A ‘project player’.

Project Mayhem, as it turned out. 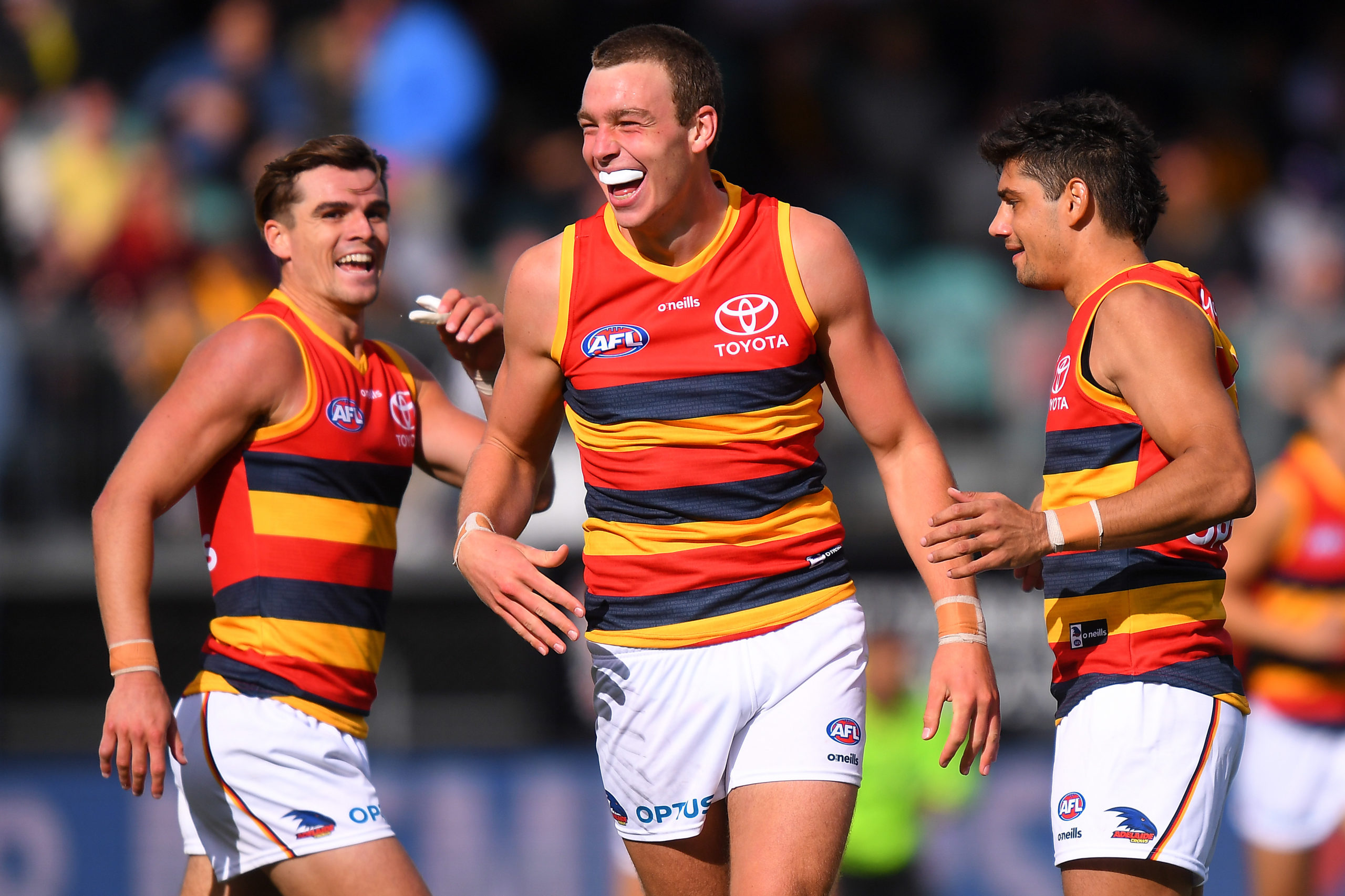 I needn’t have worried.

Within minutes, his very first kick in AFL football set up a sparkling passage of play that led to a team-lifting goal.

Sure, it was for the opposition, but no matter.

He can at least rightly claim his first touch was a score assist (even if the score came about from a kick straight into the man on the mark and a rebound goal that, ultimately, proved the difference in a three-point game, but we won’t mention that bit).

Anyway, he was industrious if shaky early, picking up possessions up the ground as the Hawks took an early lead.

But then came the second term.

To that point, Adelaide’s accuracy in front of goal was the only thing keeping them in the game. By half-time, it was a kind of magic.

After that Round Two loss to Sydney – when the Crows had 33 scoring shots, and still lost by that same amount – Matthew Nicks suggested they might need to practice their goal-kicking.

Given Adelaide’s SANFL reserves team also kicked a modestly ridiculous 10.2 in the first half of their Saturday win over Centrals, it’s fair to suggest that practice has paid off somewhat.

Incidentally, seven of the SANFL Crows’ 16 goals came from the boot of Billy Frampton, playing his first reserves game for the year after going goalless since Round One in the senior side. 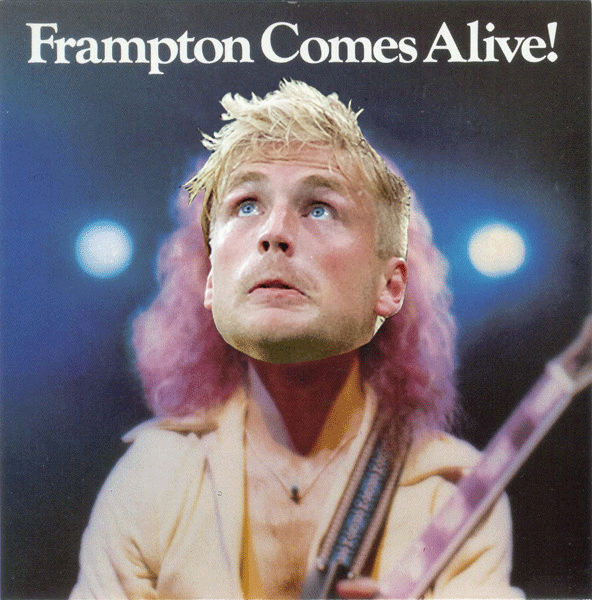 Sadly, though, that 10-goal second term against the Hawks was the only quarter we won for the day – even if it was nearly enough.

But gee whiz, it was a thing of beauty.

Thilthorpe ended the term with three: his first, converting from a regulation free about 30 out, directly in front.

That was a big moment, but bigger was to follow.

Within five minutes he had two more – plucking the ball from the pack and kicking truly.

As my son and I watched the match on the last day of our school holiday vacation, my non-football-supporting wife took the opportunity to duck to the Port Elliot bakery, where the line-up for service is (in)famously interminable, and she told me later there was a guy stuck in the queue complaining that he was missing the second quarter.

Geez, that bloke must have been fuming when he checked the score.

Still, baked goods were the order of the day, because after their onslaught of ‘sausage rolls’, the Crows became decidedly flaky.

Thrillhouse added another two in the third term, winning a one-on-one in the goal-square and playing on before later clunking a big pack grab.

But they were the only two the Crows were to kick in the entire second half, as the Hawks ran us down.

It was a sobering defeat: even with our best quarter in years, we still lost to a fairly average side.

“There’s nothing like a win to lift your spirits,” Alastair Clarkson mused in his post-match media call, as Crows supporters learned yet again that the converse is also true.

Particularly when you throw in Adelaide’s emergency sub snafu, wherein a player dropped for injury was named as the 23rd man, took an eternity to take the field after he was activated and had zero impact. 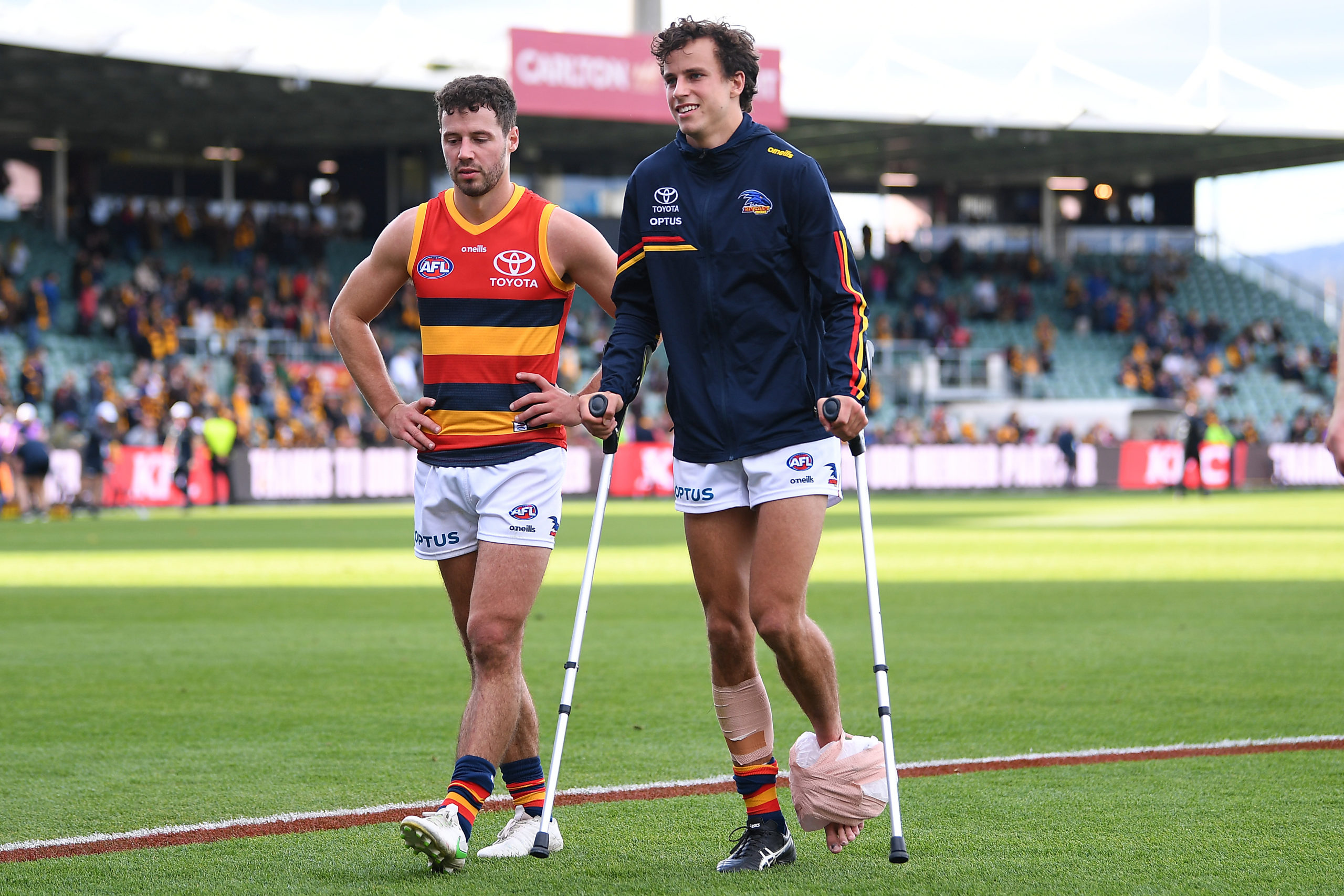 Will Hamill making a strong case to be next week’s emergency sub. Photo: James Ross / AAP

Still, at least the club responded to the resulting furore with their usual deft touch:

Anyway, despite their obviously annoying continued success, I’ve got a sort-of soft spot for the Hawks.

We did, after all, win our first ever final against them back in ’93.

Then, in our ’99 funk after a demoralising loss to the Bulldogs when – in an early template of our weekend playbook – we let slip an imposing lead to lose by two points, we broke through with a morale-boosting win against Hawthorn at home.

Moreover, we’ve ended both our longest losing streaks (in 1999-00 and last year) with breakthrough wins against them.

But for all that, they’ve given us some of our less pleasant memories too, none less pleasant than razor-thin finals losses in 2007 and 2012.

The former, in particular, followed an eerily similar cadence to Sunday’s game: a season-best quarter of football before the inevitable grinding loss at the death.

Those aforementioned losing streaks, incidentally, bookend that post-premiership period so succinctly symbolised by Sunday’s game, between which we’ve rarely been bad per se, but have never been quite good enough.

When I tweeted before the weekend’s game that we shouldn’t necessarily expect great things from Thilthorpe’s debut, one respondent questioned why I should have so little confidence in my team, pointing out that they did, after all, play off in a Grand Final less than four years ago.

My correspondent evidently didn’t actually watch said Grand Final, because the result kinda demonstrated why we’ve learned not to get too far ahead of ourselves.

For, despite our occasional pretensions to be better than we ultimately prove to be, we’ve managed to be perpetually middle of the road for more than two decades now.

That’s why I didn’t even really mind last year’s nadir, when the club took a deliberate decision to bottom out and build, effectively, an entirely new list.

But the thing about rebuilds is, for every Hawthorn, there’s plenty more Melbournes, Carltons and St Kildas.

So it’s one thing to embrace the theory, but another to have faith that we’re actually choosing wisely at the draft table.

And with Gallucci delisted, McHenry yet to set the world alight, and Jones and McAsey running around in the reserves, it’s reasonable to question whether we’ve nailed our first-round picks in recent years.

But at long last, it looks like we have.

Sure, it’s only one game in, but we’ve caught a glimpse of something I haven’t seen for years.

Back in 2009, I spied Kurt Tippett out and about not long after he kicked four goals in that ultimately devastating semi-final loss to Collingwood (another of those games that showcased the best and worst of the Adelaide Football Club Experience).

“See that guy?” I mentioned to my entirely-disinterested then-fiancé. “He’s the future of the Adelaide Football Club.”

And he was, as it turned out. Just not in a good way.

And thus all my hopes of a prodigiously-talented dominant ruck-forward carrying us to premiership glory were shelved for another decade.

But therein lies the beauty of the Thilthorpedo: he’s an SA kid who grew up loving the club he now plays for.

Which means we’d have to be egregiously incompetent to screw this one up.

I’m not putting it past us, of course.

But there’s no doubt we glimpsed our future on a breezy field in Tasmania on the weekend.

And just this once – whisper it – I think it may be bright.