I have some bad news.

You may like to sit down, if you’re not already.

Here goes: the fact is – Adelaide will not play finals this year.

Shocking, I know, but there it is.

I mean, sure – we’ve kinda had a vibe that things weren’t going swimmingly.

The injuries piling up, for instance.

And, of course, our abject inability to win a single game with just five rounds left. 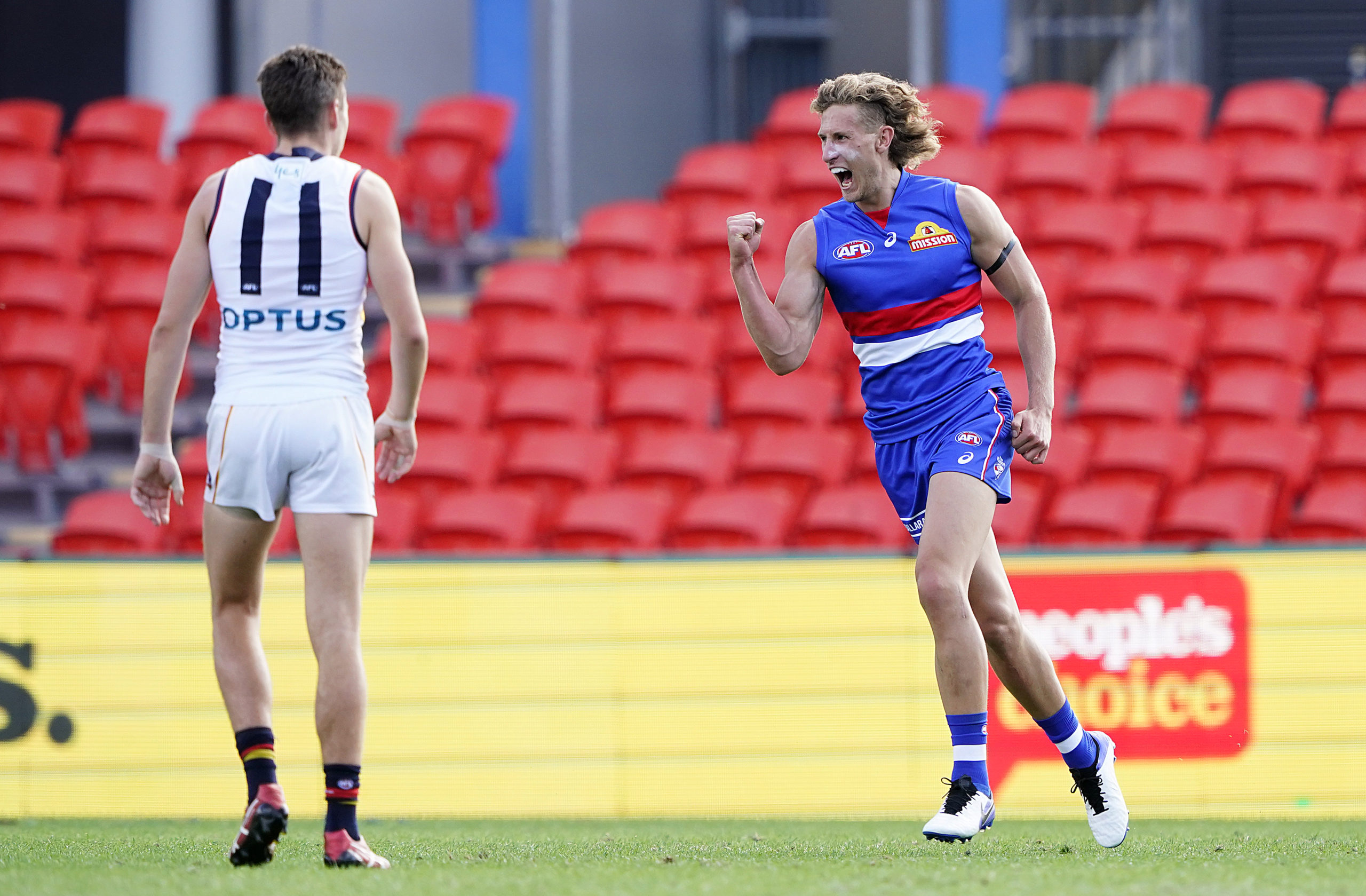 But even after the Collingwood loss last Tuesday, we still technically had that old chestnut – a mathematical chance of sneaking into the eight.

Sure, it would have involved several clubs above us winning no more than one remaining game for the season (zero, ideally).

It may also have required some bizarre twist, like a handful of clubs being stripped of premiership points for incessant COVID breaches.

And, of course, us winning every game on the run home – by a considerable margin.

All of which seemed somewhat unlikely.

But, particularly in this unrelenting bastard of a year that is 2020, stranger things have happened.

For yesterday’s loss to the Bulldogs, which started out as one of our patented feelgood losses before petering out into one of our also-patented ten-goal drubbings, has finally put the mathematical prospect of major-round action beyond the realm of possibility.

Still, it was probably clever of us to play the Bulldogs back into form – no doubt with an eye to bumping GWS as far down the ladder as possible, thus bolstering their first round draft pick for which we traded last year.

And for a few seconds there, there were some very positive signs.

Not for yesterday’s game, of course – or even for this season. But good signs for some point in the far distant future. 2023, perhaps?

Still, silver linings: we get to reflect on two defeats for the price of one this week. 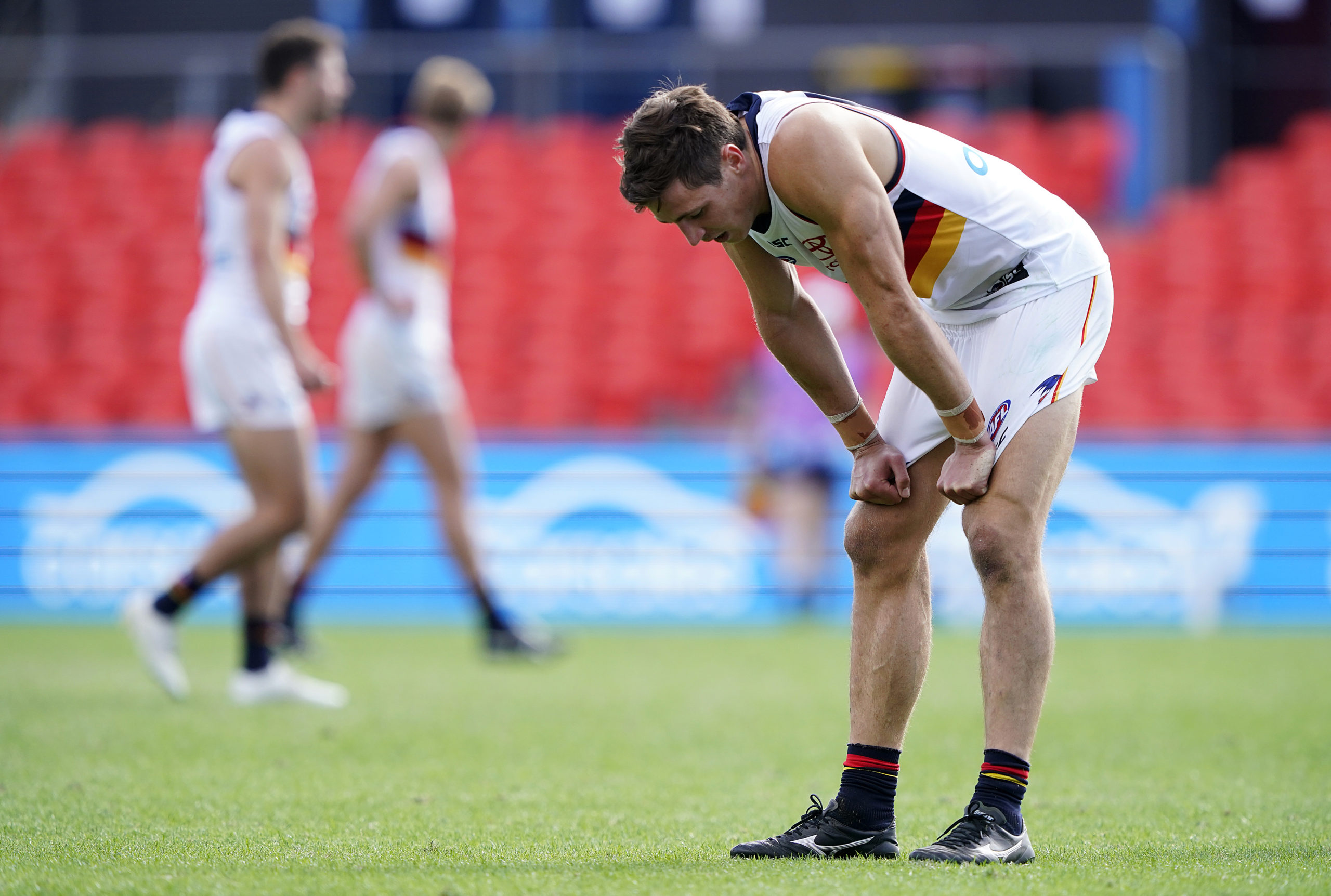 The first, against Collingwood, one of those aforementioned feelgood losses in which lessons are learned, the future looks bright and we go about our week feeling that there is light at the end of this interminable tunnel.

The second, against the Bulldogs, started off feeling like one of those kind of losses too, but before long took a wrong turn to become the other sort, wherein we’re comprehensively outclassed, nothing much goes right and only errant goalkicking by our opponent saves us falling to a humiliating triple-figure defeat.

At least, though, we’re making our presence felt around the league: on the strength of Saturday’s Demons v Magpies clash, in the past fortnight we’ve evidently played Melbourne into form and Collingwood out of form, as though the realisation that they’d briefly made us look competent sapped whatever morale the Pies still retained.

Still, the few glimpses we’ve given of fast-flowing, adventurous play – which, when it works, has been largely on the back of players with a mere handful of games under their respective belts – has given me great confidence that we have the potential to perhaps one day, at some point within the next few years, win a game of football. 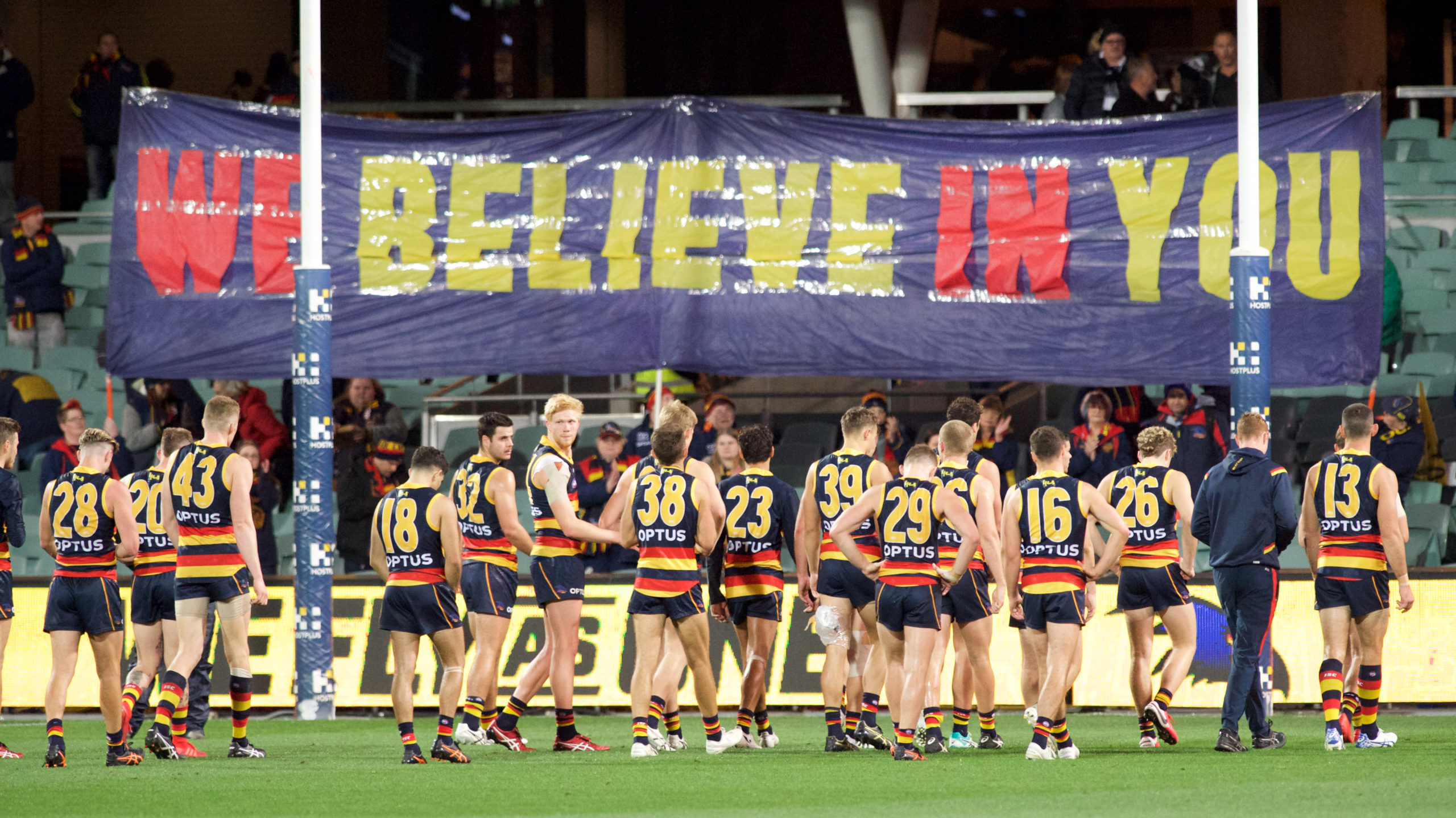 But putting our various efforts of the past few days aside, we also – and this is a very important and significant thing indeed – get to reflect on a ten-goal loss by Port Adelaide.

So on balance I’m calling it a good week. 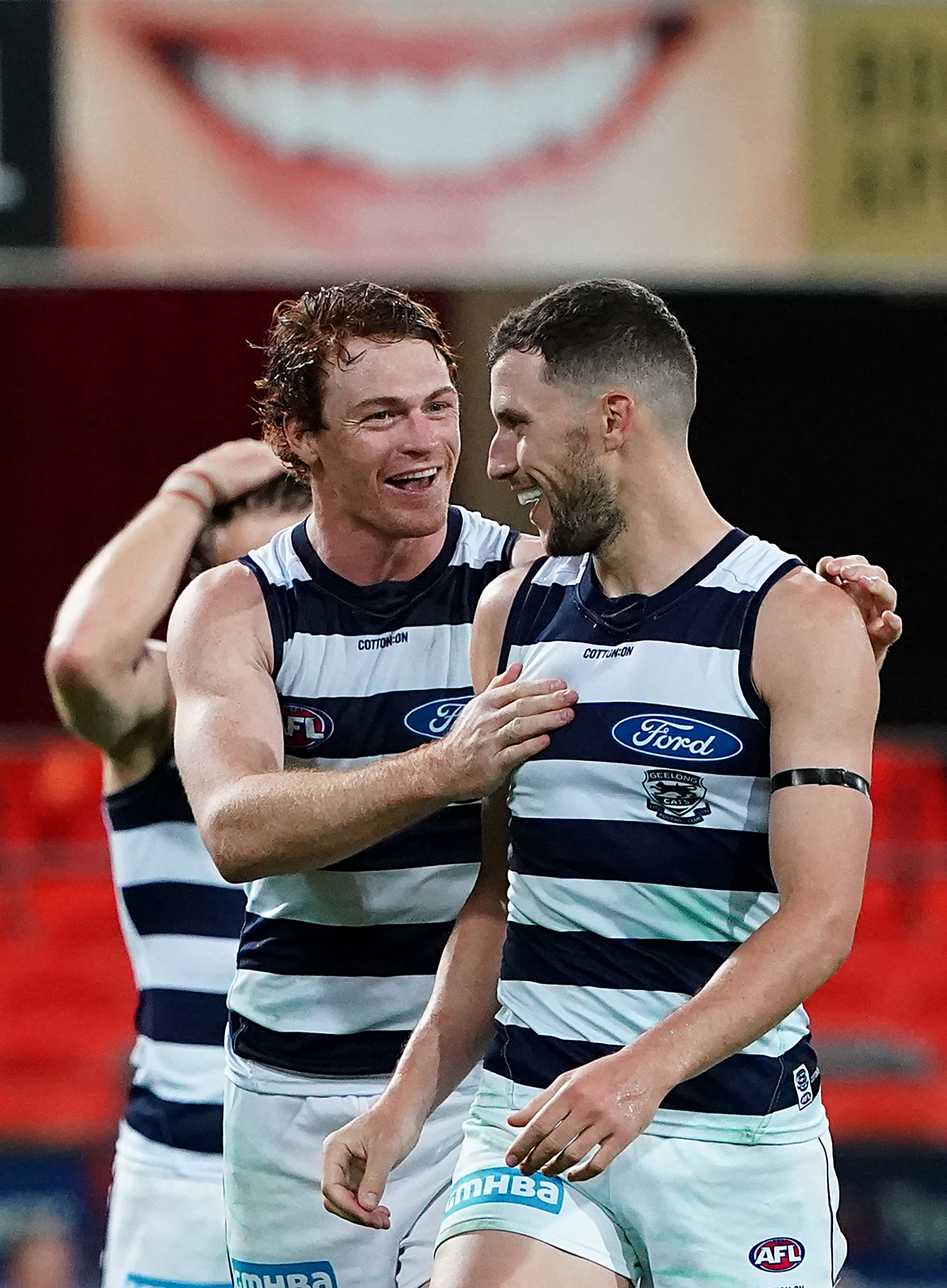 The billboard behind Gary Rohan and Sam Menegola sums up Crows supporters’ feelings about the evening. Photo: Dave Hunt / AAP

After all, us losing is a commonplace occurrence these days.

Whereas Port losing… well, Port losing has only happened three times so far in this season that feels like it’s been going on since the dawn of time (and which, thankfully, doesn’t count or matter in any way at all).

And given they’re playing the three bottom-four teams who aren’t us in their next three games before facing the decidedly mediocre Bombers and Collingwood, it may be a long while before we see them lose again.

(Happily, we managed to fairly comfortably outscore the bloke who kicked six goals against us.)

The rest of Geelong also managed a handy 8.5.53 to make the actual margin an even 60 – roughly half the final margin when these two teams met on Grand Final day in 2007.

Which I mention for two reasons: one, of course, because it’s very funny and enjoyable to mention.

And two, because last Friday night’s game between Port and the Cats was widely touted as a prospective Grand Final preview.

As such, it clearly highlighted a few important points.

Firstly, that to make the Power revert to the ‘Port Adelaide Psychos’-era of 2019, wherein they’re in all-conquering form one week before submitting meekly just days later, one must primarily ensure Charlie Dixon is kept very quiet – in this case, by giving him the same treatment that Otto gave Ken in A Fish Called Wanda.

And secondly, that Metricon Stadium is a world-class ground that would obviously make a fantastic Grand Final location – much better than Adelaide Oval. Take note, AFL!

For if things continue as they have, it may mean we are going to have to make some very difficult decisions in coming weeks.

After all, we’ve made it this far through a global pandemic, so it’s time to acknowledge that 2020 is going to be the kind of year where you have to celebrate the least bad outcome.

I’ve long taken solace that since flying the Crows’ nest for the Moggs Creek Moggies, Paddy Dangerfield has never quite got near a premiership.

I have consoled myself on those many, many occasions since when it was evident that what my side direly lacked was a top-line clearance player, explosive pace through the midfield and a dynamic forward-line presence – if not some magical combination of all three – that Paddy might be sitting at home in his Moggs Creek mansion, consumed with guilt and remorse that his selfish defection denied both him and us a genuine crack at the ultimate prize.

But it’s time to disabuse myself of such fairy tales: there isn’t a footballer in the league who’d be looking at the Crows now and wishing they could somehow pull on the red, blue and gold guernsey (or the white with the funny bird silhouette at the front for away games).

And moreover, in 2020 fresh perspective is required: it is no longer about my (yes, admittedly, quite stubborn) determination that Paddy D should never win a flag.

For in 2020, Paddy D could be the one solitary thing standing between Port Adelaide and a premiership. 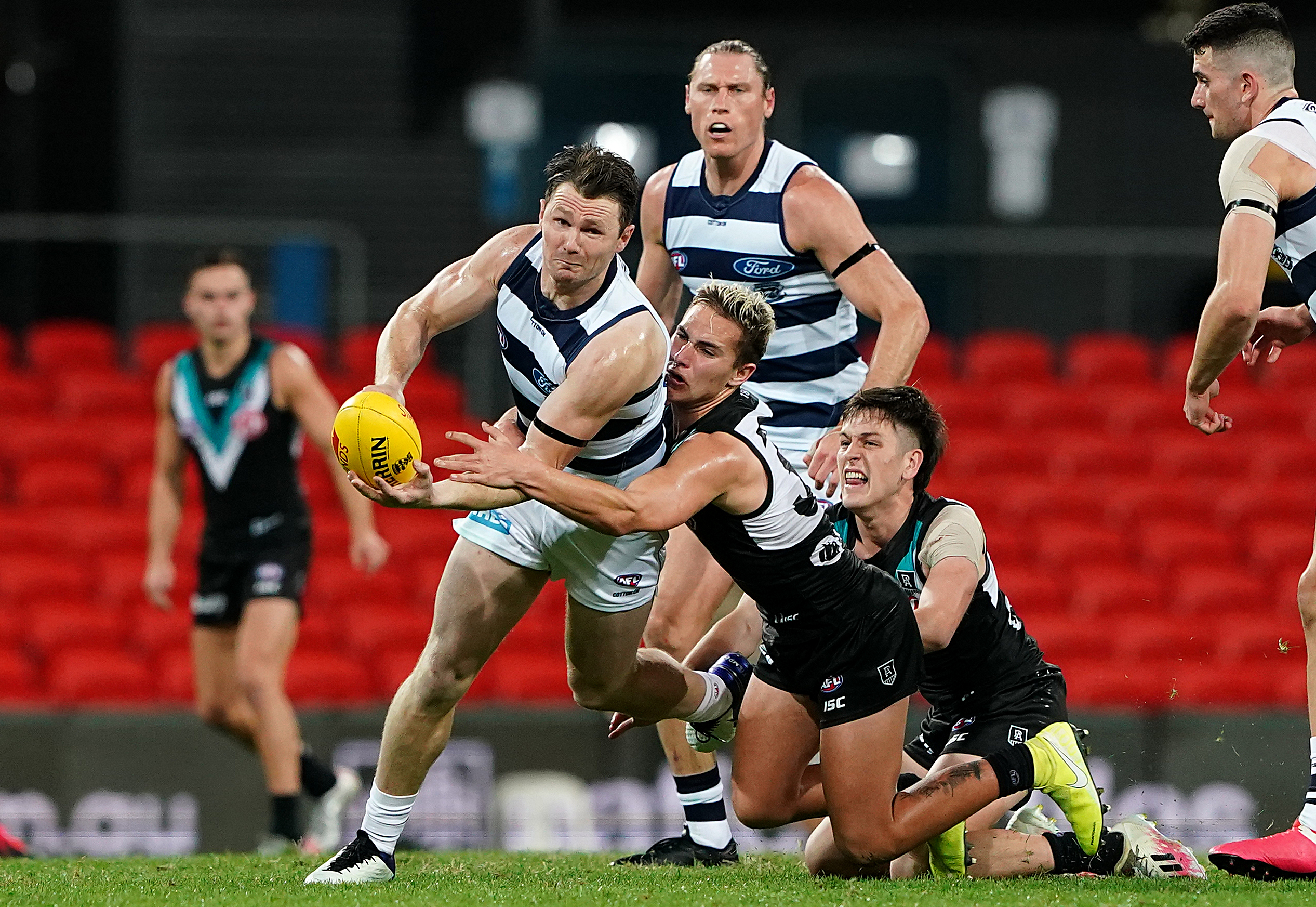 Which may make it all worthwhile, all the turmoil and trauma of his departure – which you’ll never convince me didn’t cost us a flag in 2016, a year in which a single shock loss cost us a top two berth after we also lost a bunch of tight games for want of a top-line clearance player, explosive pace through the midfield and a dynamic forward-line presence – if not some magical combination of all three.

For all that turmoil and trauma may have been the price we had to pay for him to stop Port winning a flag in 2020.

And in this unrelenting bastard of a year, stranger things have certainly happened.