So, you may not have noticed, but we sometimes complain a bit here at Fumbleland.

While you probably haven’t noticed, we can sometimes take quite a contrary view of what, to most impartial observers, could easily be considered Quite Good News.

So here’s the thing.

I have no complaints whatsoever about anything that happened during the past three days of AFL football.

Sure, I quite enjoyed the old days when the Adelaide Football Club kicked a lot of goals and bamboozled opponents with their manic pace, and all that.

But do you know what else I enjoy? 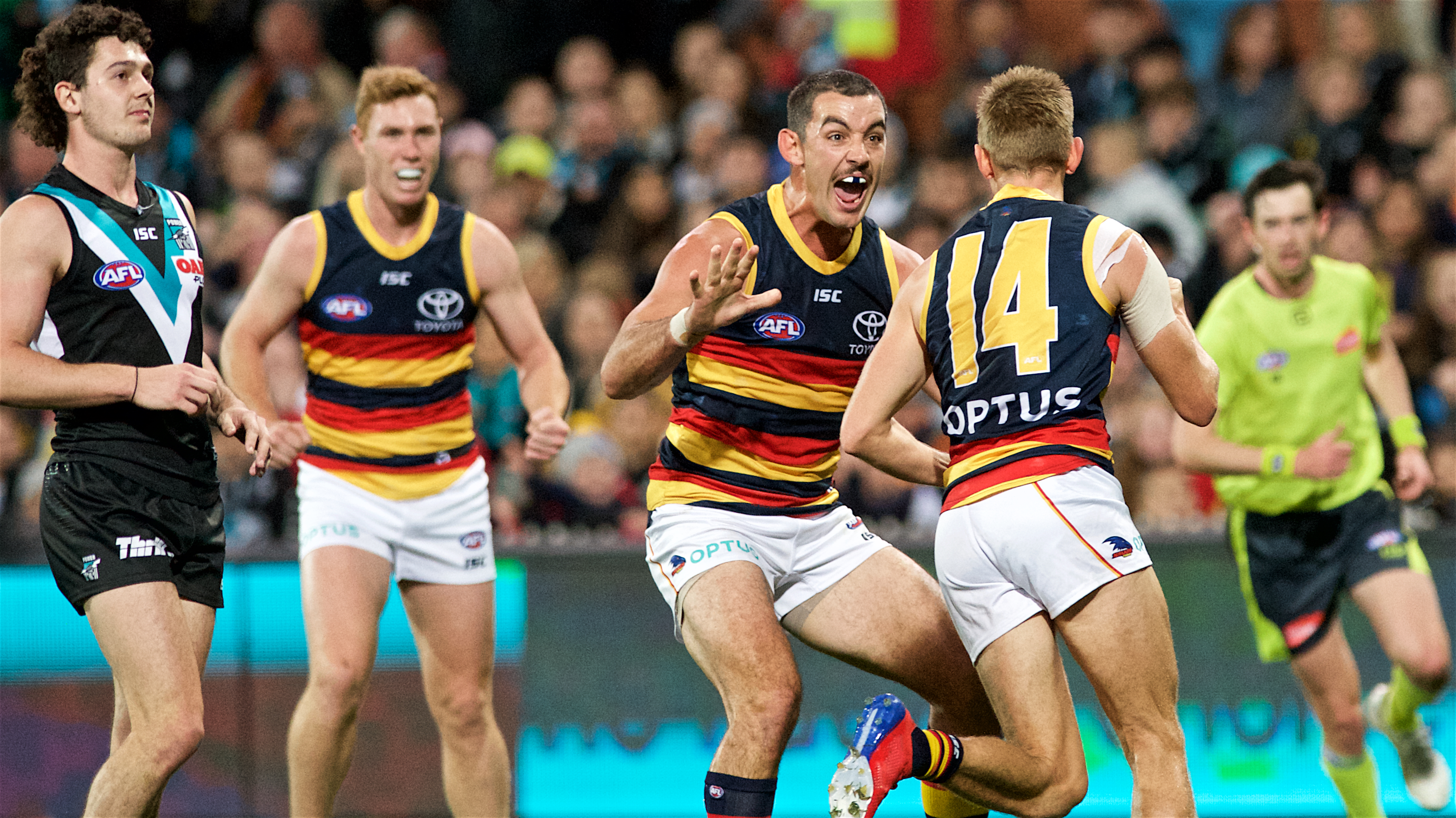 And moreover, while I enjoyed those aforementioned days of yore, there were aspects of them I didn’t much care for.

One aspect in particular, actually.

Specifically, getting belted in the Grand Final.

So while these days we seem to spend stolid stanzas of play with about as much chance of scoring as a Nationals MP on a ‘sugar baby’ website, I’m cool with that.

Because, for the first time in this peculiar couple of months since the first ball was bounced on Season 2019, the ladder all of a sudden looks more or less how I dearly hoped it would through the traditional off-season of fruitless dreams.

Somehow – some crazy old how – the Crows are in the top four. Port is in the lower-reaches of the ladder’s middle rungs. And Carlton? Dead last.

Ostensibly, of course, the advantage of a Showdown round is that if, like me, you’re inclined to play the odds of both Adelaide winning and Port losing on any given weekend, you only need to watch half as many matches as usual – although you have to watch it twice as hard.

But this ludicrous season has thrown up so many permutations with the potential to impinge upon my general level of frustration that in reality at least three seemingly-unrelated matches required varying degrees of attention.

Indeed, the Blues plunged to the depths of the league as of the first match of the round on Friday night, when Sydney held on to beat Essendon by five points despite the Very Normal Dane Rampe’s best efforts to cruel our prospective Number One draft pick. 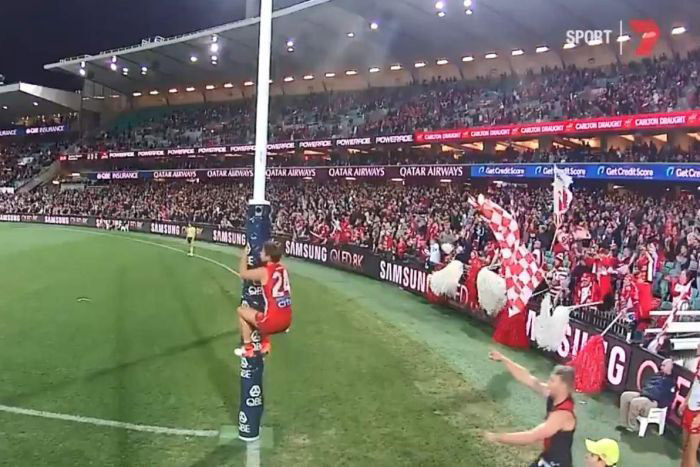 Rampe showing Carlton how to climb. Photo via Channel 7 coverage

Annoyingly, Carlton then played Collingwood with a newfound competence, and had to draw on all their reserves of ineptitude to eventually lose the match.

By dint of their very Crows-relevant draw, I’ve been on the Collingwood bandwagon for two weeks now and they’re really testing my patience. If they can’t lift to help us to a Number One draft pick, what can they lift for?

Fair to say, the goodwill engendered by Collingwood’s 48-point-to-3 first quarter the previous week against Port has more or less evaporated – particularly given they briefly let the Power back into the game in the ensuing two quarters anyway.

Still, we can’t really get on our high horses about letting Port back into games after building 40-plus point leads, can we?

Given we were playing against a veritable Port reserves team in Saturday’s Showdown, it was the second time in one day that the Magpies gave me a final quarter scare.

For the best part of the first three quarters, though, I was sitting back in my lounge room, calmly watching it all unfold.

I tend to eschew away-Showdowns these days, largely because going to Adelaide Oval for a Port home game is a bit like one of those nightmares where your surroundings are all familiar, but somehow also weird and sinister.

The feeling I get walking amongst hordes of teal-clad Power fans is a bit like passing a police car while you’re driving; you know you haven’t done anything wrong, but you still feel a bit uneasy.

I guess it’s all part of our cultural conditioning.

Which is why, when Port gets a run-on from 44-points down… well, we’ve endured enough early-2000s eight-point stingers and last minute disasters (the names Monfries and Motlop come to mind) to know that complacency is the mother of all fuckups.

And then, when Greenwood kicked that sitter into the man on the mark for no score, and the Power rushed it down the other end to close within two goals with an eternity to play…

Which meant when Tex marked a Tom Lynch pass and lined up for the goal that would snuff out the Power surge, this was more or less my inner monologue:

Luckily, of course, the captain’s goal went through and, despite our best efforts to throw it all away, Port capably cemented their status as expert belated shutters of stable doors.

Fortunately, though, they didn’t manage to rip off their propensity for comeback victories against the odds.

The thing I still don’t quite get is: How the hell has all this happened?

I mean, best I can tell, this entire season so far has been a constant universal narrative about Port’s unexpected revival and how much we suck.

I still haven’t quite gotten over that North Melbourne game (I’m not sure I ever will, to be honest), and while the most haplessly optimistic among us might have greeted our 1-3 start with wistful reminiscences about ’97 and ’98, those of us perpetually soul-bruised from the subsequent 21 barren years saw it as, on the whole, a Bad Way To Begin The Year. And yet, here we are in third spot on the ladder.

Indeed, it seems like only yesterday we actually fell below the Blues, for those few brief-but-uncomfortable hours between their sole win against the Bulldogs and our home victory over Gold Coast.

And yet, here we are. Third spot on the ladder.

It helps, of course, that we’ve had possibly the softest four-week draw of any team in the comp: three perpetual non-finalists and a Port side so stricken by injuries that one might almost feel sorry for them if they weren’t so fundamentally unsympathetic. 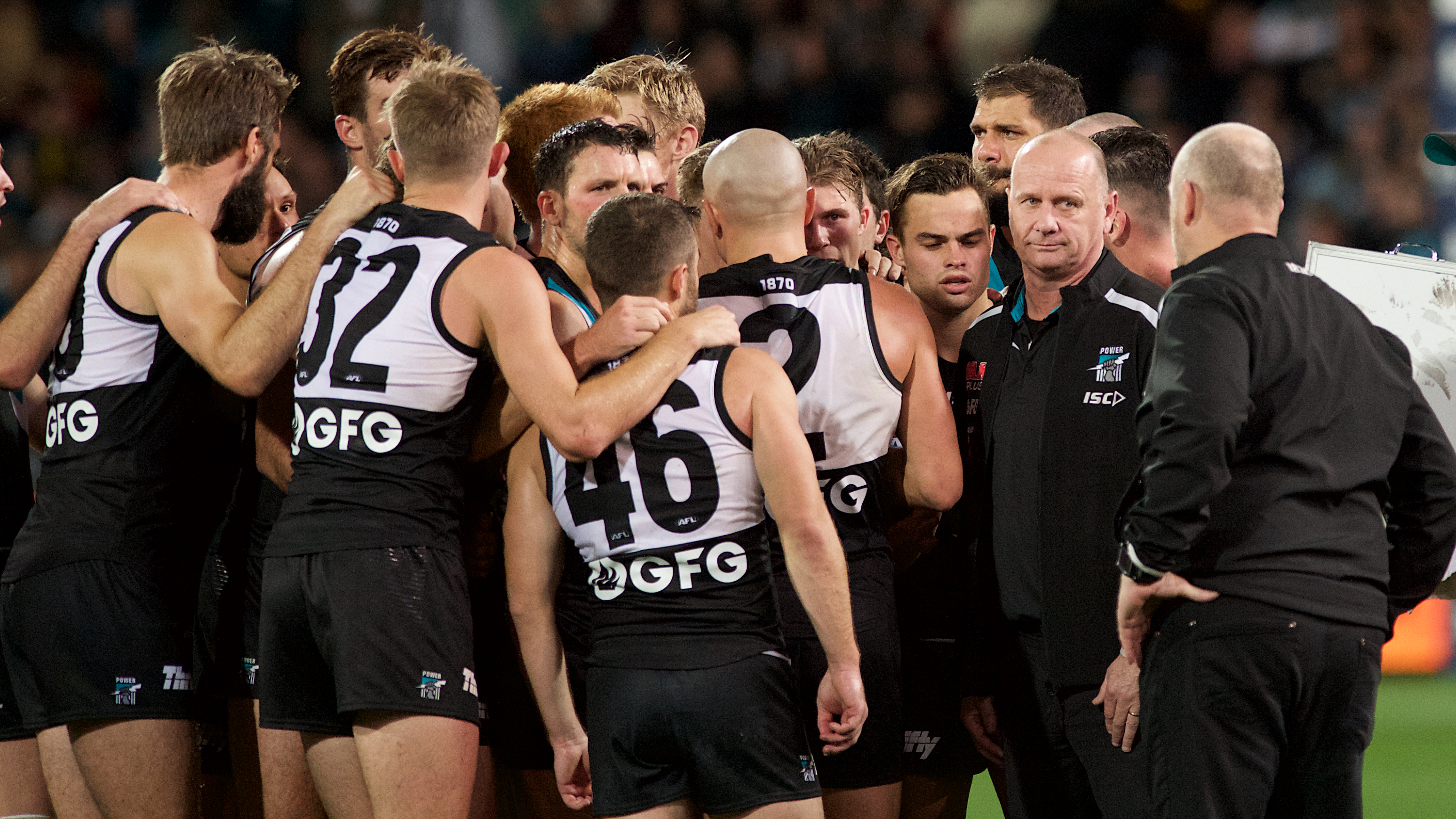 They even lost recruit Ryan Burton from the get-go on Saturday, thus freeing up Eddie Betts to have a night out. Or a night off, as it turned out.

Still, they weren’t so hard done by that they couldn’t make unforced changes, dropping draftee Zak Butters for the Showdown after a quiet fortnight.

They brought in Johnson and Motlop though, so it was much of a muchness really.

Having endured long passages of dour, grinding football in recent weeks, it’s now clear that this is the new normal. Gone are the swaggering days of slick ball movement and goal avalanches; Saturday’s Showdown, like the previous week’s Docker slogfest, was often dour and ugly.

We were outgunned at clearances and lost the inside 50s, but we wore down the opponent with relentless rebounding forays forward and ferocious tackling.

It was more shutdown than Showdown. 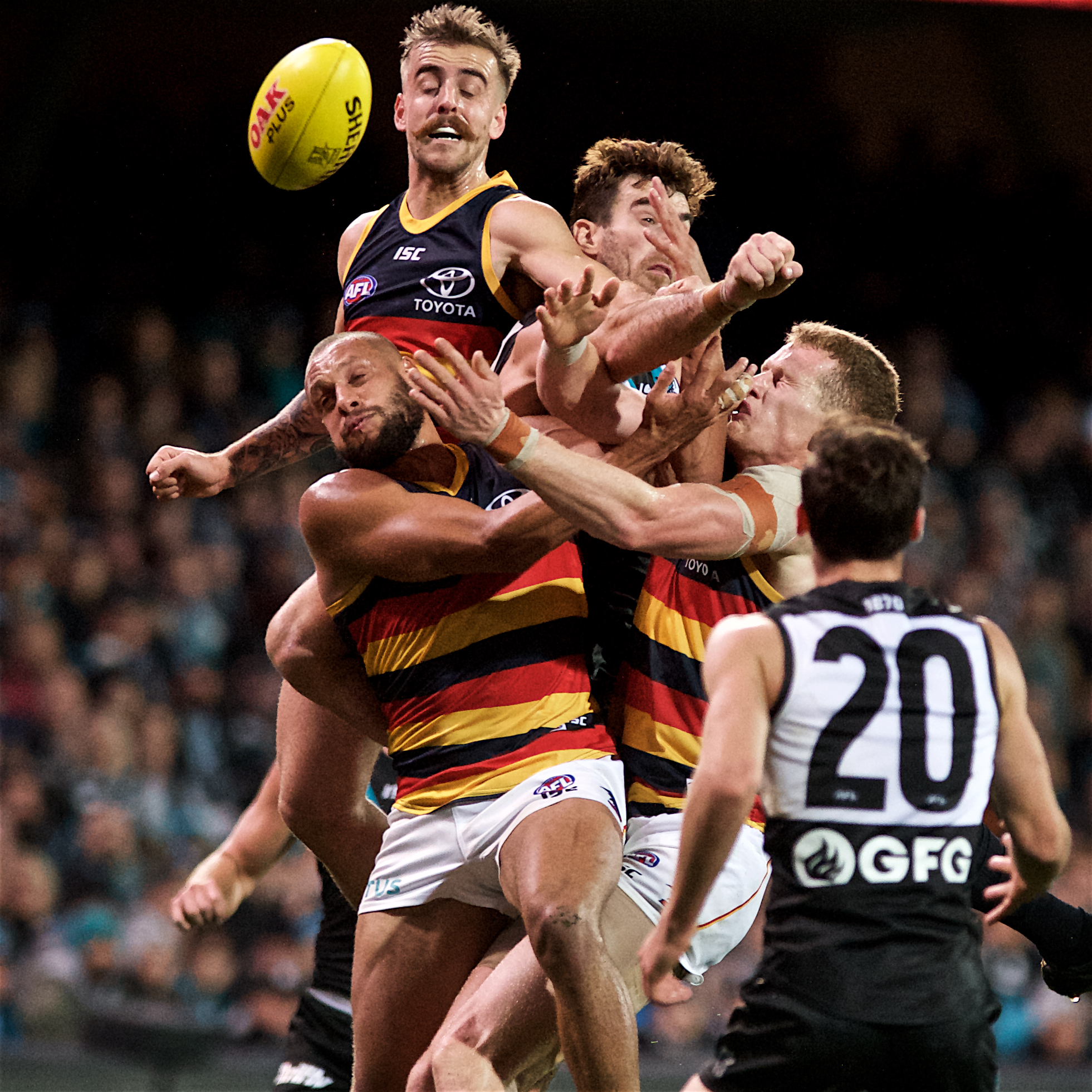 It was tight in the contests on Saturday. Photo: Michael Errey / InDaily

This is significant – there was a time not so long ago when the only tackles seen at West Lakes were in the change rooms.

And, you know, I don’t wanna harp on about the whole ‘Neil Craig’ thing with Don Pyke, but basically – he is Neil Craig.

After two years of seeing his fast-moving, high-scoring gameplan cruelled in September, he appears to have shifted to a playbook that yields the AFL equivalent of a 1-0 soccer score.

And you know what?

The Swans were derided as ugly in 2005, and they won the flag.

The Eagles were dour in the 90s, and they won it twice.

Still, from the poorest of starts, for the first time this season, things are genuinely looking up.

If the finals were played today, we’d be facing Collingwood at the MCG for a shot at a prelim, with a double chance if we lost.

If the draft were held today, we’d have the very first pick.

Unfortunately, both finals and the draft are some way off yet, and if the last eight weeks (let alone 21 years) have taught us anything, it’s that fate is a fickle bastard and we shouldn’t tempt him.

But, whatever else, we did beat Port.