Around 25km northeast of Mexico City is a town called Texcoco, a semi-rural dustbowl home to assorted murderers, drug cartels and a disillusioned Adelaide Crows supporter known as ‘Latina Bettina’.

Her husband’s agricultural work saw Bettina move to Texcoco shortly after the 2017 Grand Final, which means in quick succession she’s endured both the post-premiership streets of Richmond and a place that, as her mate Gary puts it, “makes the Gaza strip look homely”.

Sounds much of a muchness to me.

Anyway, since that point, this long-suffering Adelaide aficionado has been forced to endure not only the mean streets of Mexico’s badlands, where cars exist largely for depositing dead bodies, but the Crows’ increasingly abject post-Grand Final form.

I mention this in part to wish her, at Gary’s request, as happy a birthday as possible (football results notwithstanding) and also to provide a timely reminder for the rest of us that there’s always someone worse off than yourself.

I mean, following the World’s Most Annoying Football Team™ can be a pretty soul-destroying enterprise, but it’s also very much a First World Problem.

But imagine having to endure it while simultaneously grappling with the gripes of the Third World.

So, in deference to Latina Bettina, it’s time to find a bright side (at least for the rest of us) in all of this – and I think I’ve managed it.

I’ve found some Genuinely Great News that should lift our collective spirits and console us through the long week ahead.

Are you sitting comfortably? Here it is.

Of all the teams on the AFL ladder with only one win to their name, we’re the highest.

That’s nothing to sneeze at – it means we have the highest percentage (by a very small margin) of the four teams who, like us, can’t seem to work out how to play Australian Rules football very well. 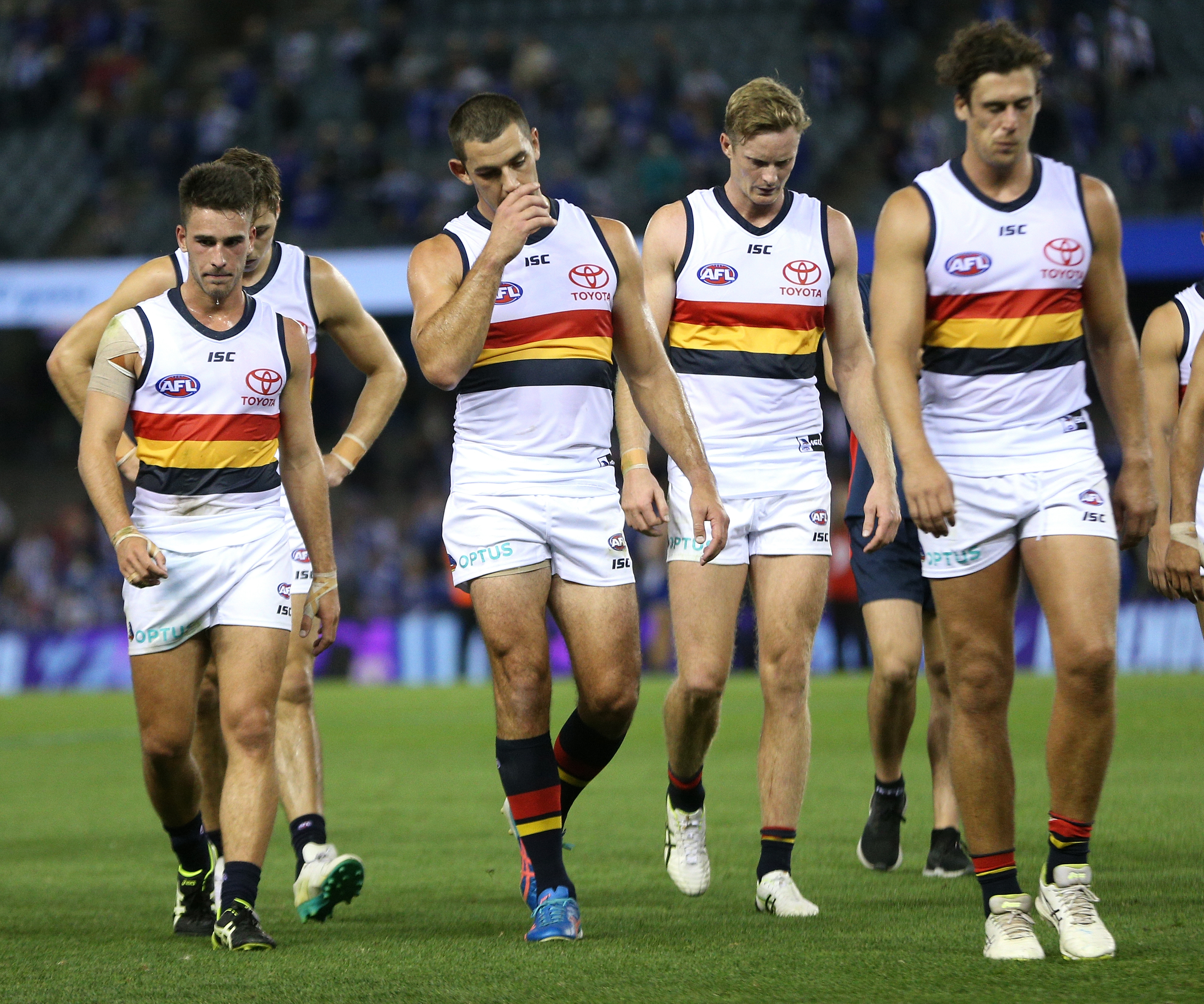 Sure, two of them had wins this past weekend (one, indeed, at our expense) and appear to be running into some form, while we appear to be running out of it – but we’re still higher (by a very small margin) on the official AFL ranking mechanism that helps determine one’s weekly self-worth. 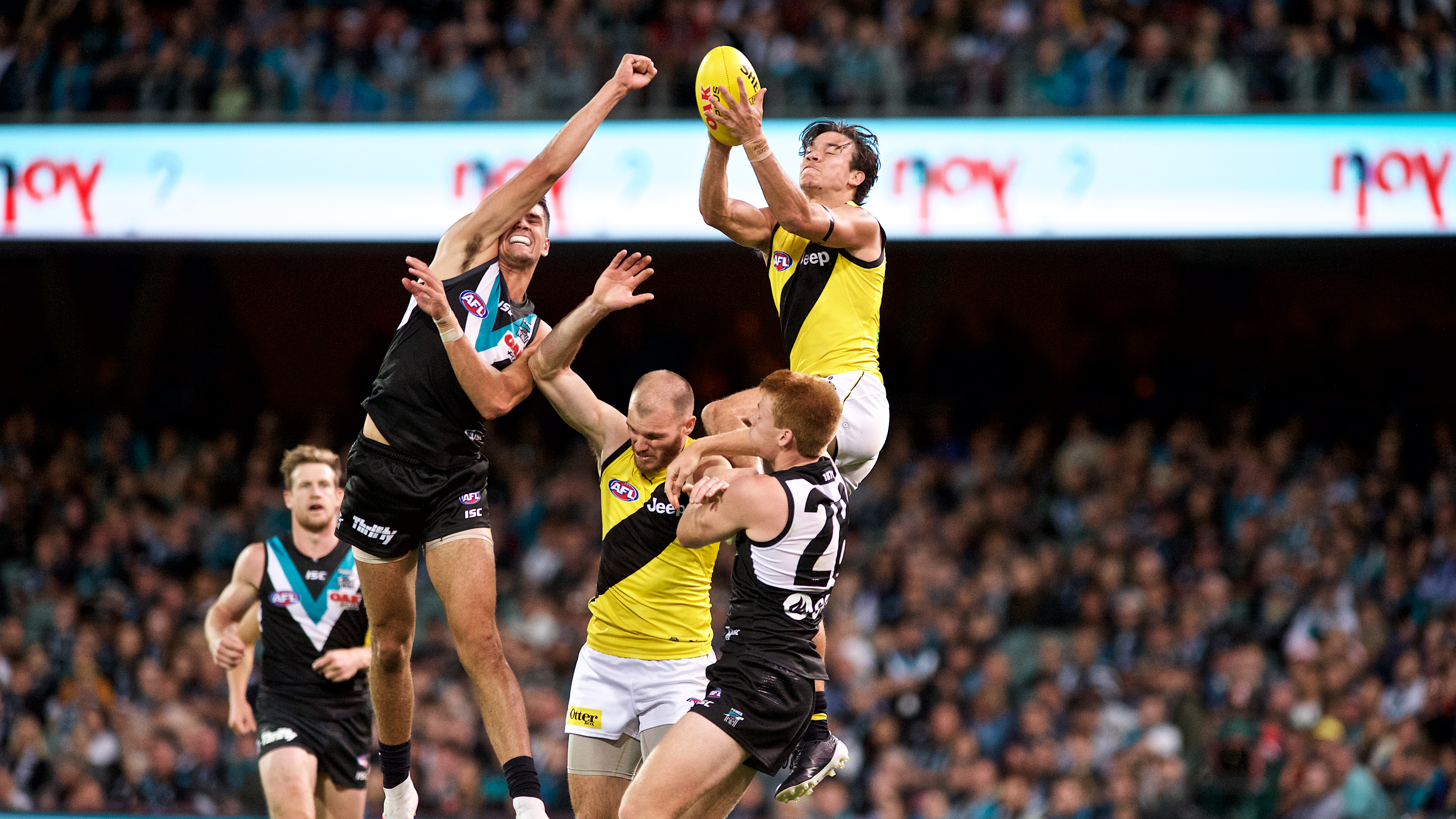 Well, there’s also the fact that our prospective Number One draft pick is still gestating away nicely, courtesy of Carlton amiably throwing away their slender lead over Gold Coast yesterday with 10 seconds left on the clock.

It was without doubt the high point of my weekend, which means that Carlton’s battle to maximise our first round draft pick is now officially a more compelling narrative for Season 2019 than the Crows’ own battle to make finals. Or win a game, even.

Because, let’s face it, finals in 2019 is looking about as plausible as Josh Jenkins’ inevitable selection next week. 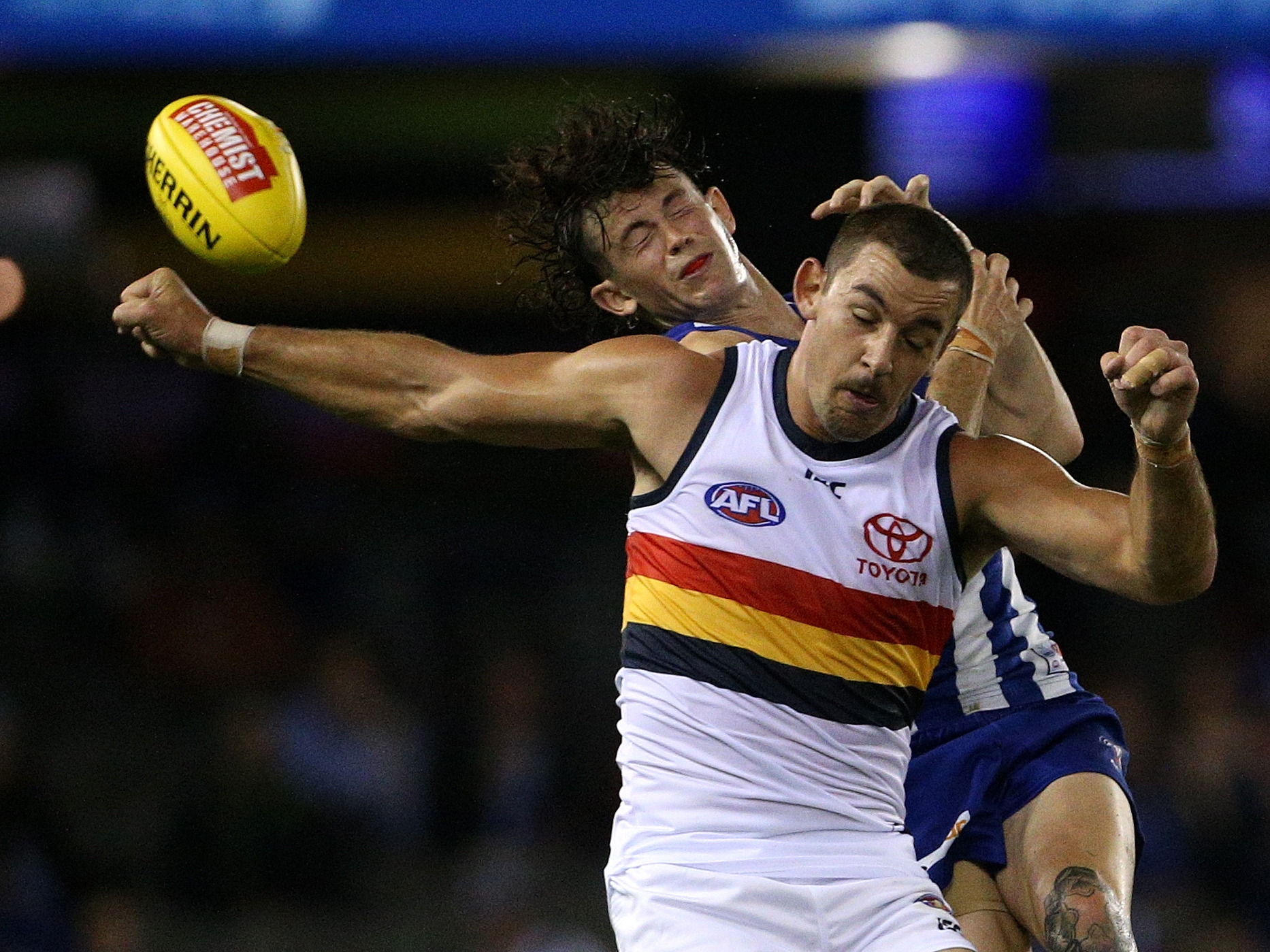 To add salt to the wound, Jasper Pittard was among the Roos’ best (Tex Walker wasn’t among Adelaide’s). Photo: Hamish Blair / AAP

And while following the Blues’ blues is proving a temporary distraction from our own, the Carlton draft swap was supposed to be the icing on our year – not the whole damn cake!

It’s as if we’re tanking on Carlton’s behalf

For yes, they may well end up with the wooden spoon and be forced to hand us our coveted number one draft pick – but at this rate, we’ll be handing pick two back their way as compensation.

And it could yet be the other way around; for all their faults, Carlton at least played with some grit and desperation yesterday.

Whereas the Adelaide team that turned up at the ironically named Marvel Stadium on Saturday night was as flat, impotent and uninterested as ever I’ve seen them.

It’s as if we’re tanking on Carlton’s behalf!

So that’s heartening, isn’t it?

It was a bit like the ‘98 Grand Final, except for both sides being thoroughly shit

Especially after Don “Outcoached-By-Brad-Scott” Pyke opted to Make A Statement™ by dropping Bryce Gibbs (you know, that bloke Adelaide handed over two first-round draft picks for a little over a year ago) to the reserves. At least no-one can accuse us of treating the SANFL with contempt (oh wait, yes they can).

Still, it’s fine to Make A Statement™ I guess, although it’s arguable handing over two first-round draft picks for a player and then dropping him 25 rounds later doesn’t just reflect badly on him…

But the thing is, when you drop a senior player to Make A Statement™ because the team is playing badly, only for the rest of the team to show up and play Even Worse Than Before, it does tend to suggest your statements in general are somewhat falling on Deaf Ears, doesn’t it?

Luckily for Gibbs, Pyke says he “wants him in our best 22” – well, you’d kinda hope so wouldn’t you?!

And on the bright side for the former Blue – at least he’s not still playing for Carlton. 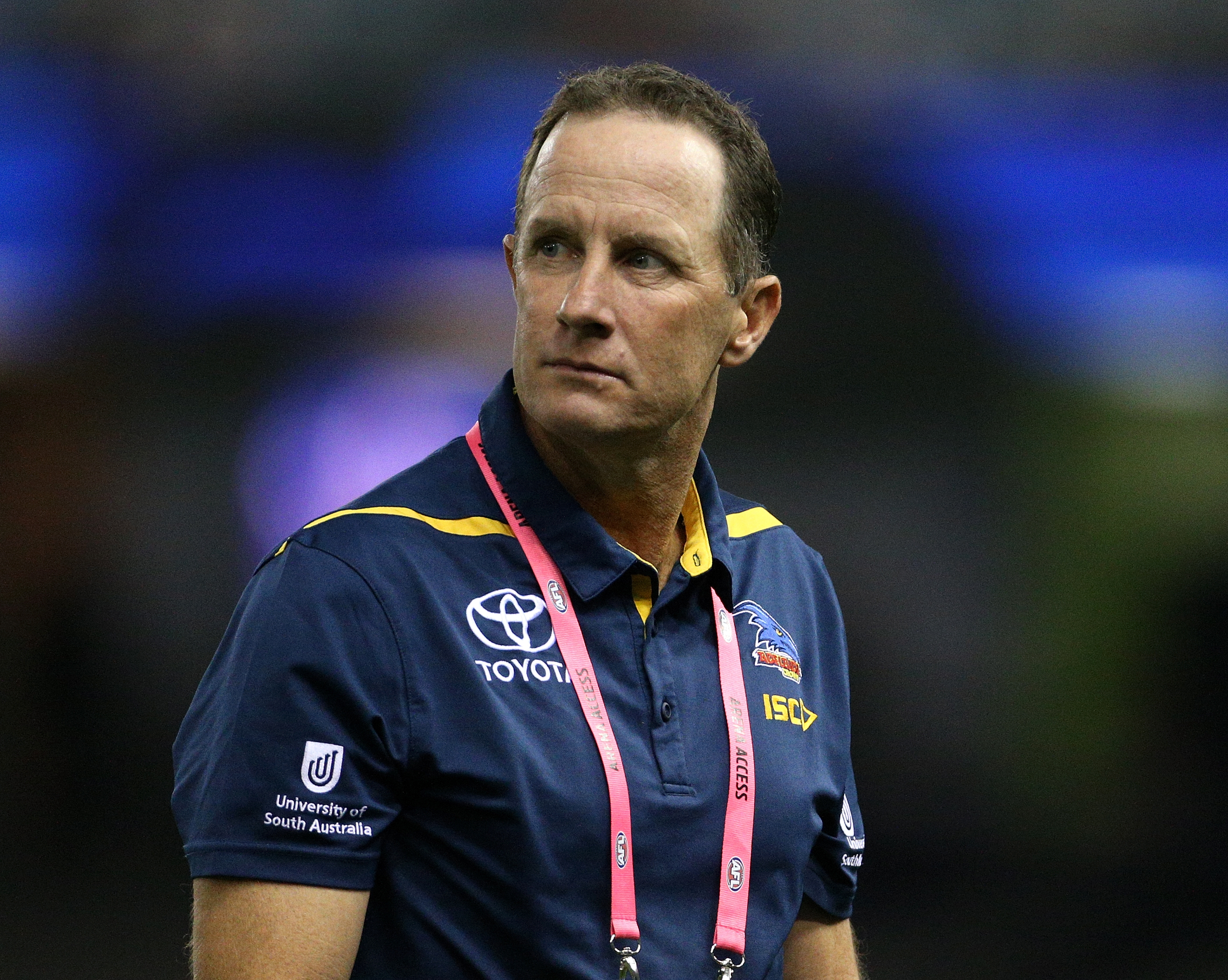 If there was a downside to the Blues’ loss it was that the team they lost to, the Suns, have now won their past three games after losing in Round One by a solitary point.

Oh, and we happen to be playing them on Sunday.

On paper, indeed, the idea of playing Gold Coast, St Kilda and Freo in succession seems like a perfectly acceptable three-week draw. But then, between them they currently occupy the fifth, sixth and seventh spots on the ladder – while we’re all the way down at 14, having just lost to a side that was winless after three rounds.

They played like a winless side too, North Melbourne: this wasn’t a case of the Kangaroos stunning us with some kind of Breakout Game.

So poor was the contest unfolding before us, it was clear that one side was dragging the other one down to its own putrid level. The only question was, which was which?

Sadly, we soon figured it out. 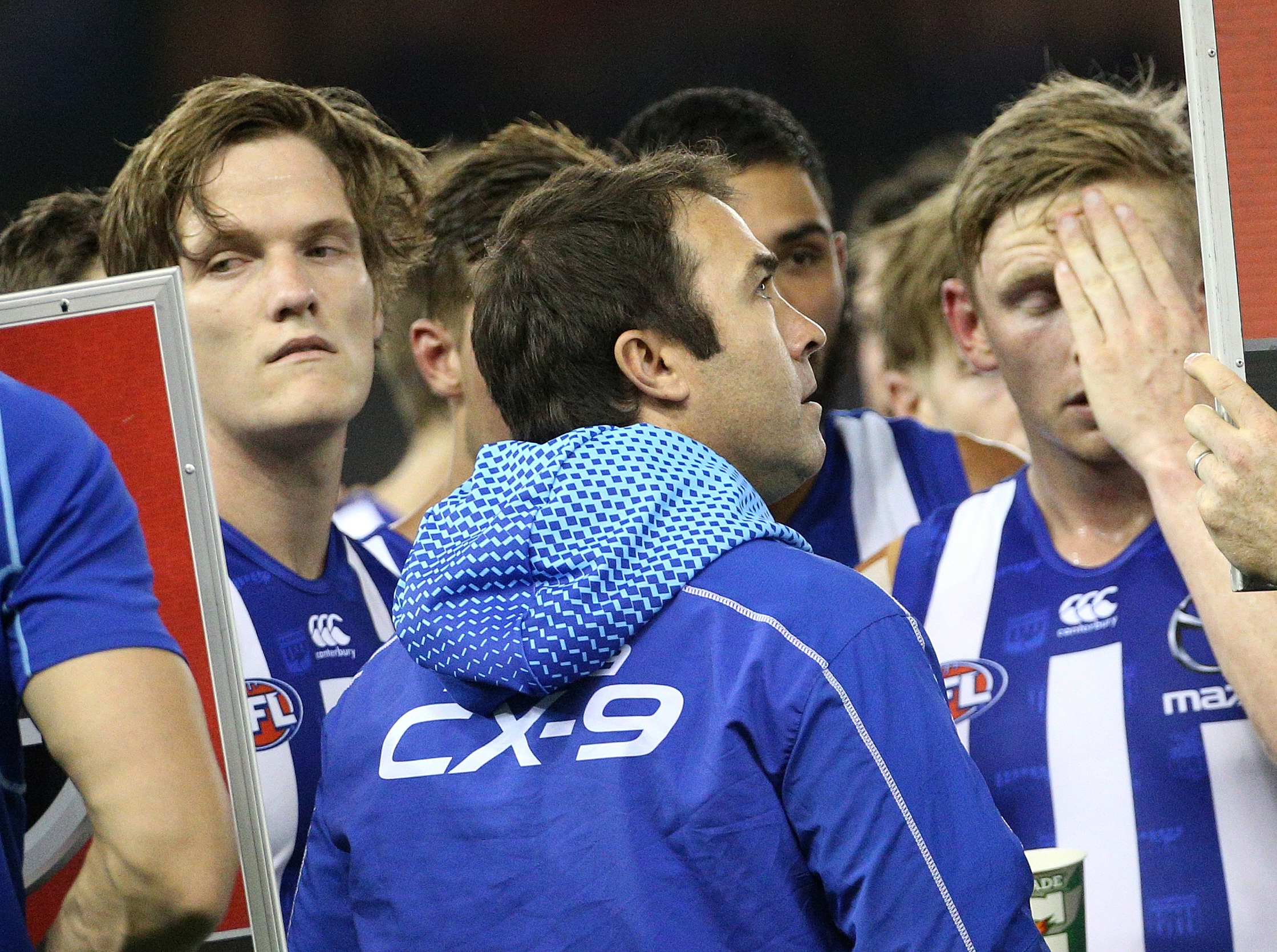 The fact we only lost by 12 points is scant consolation; we were so poor that had we been playing a genuinely competent AFL side, we’d have lost by 10 goals.

The Roos absolutely peppered their shots for goal in the first half, going into the long break with 3.10 to their name. Indeed, it was a bit like the ‘98 Grand Final, except for both sides being thoroughly shit.

By three-quarter time though, after a four-goal-straight salvo from North had seen our fairly comfortable lead evaporate with no sign of it ever returning, this game clearly had Complete Fucking Disaster written all over it.

We’ve heard much over the years about Don “Outcoached-By-Brad-Scott” Pyke’s famous refusal to countenance a ‘Plan B’, but on Saturday it became apparent our new Plan A is simply ‘Do as little as possible and assume your opponent will kick themselves out of the game’. Which is a pretty crappy plan, truth be told.

Once again Adelaide’s forward line – sans Charlie and the Gov – looked utterly limp, with the Brayshaw-led commentary team doing its best to pump it up by constantly referring to our “efficiency” inside 50.

By which they presumably meant we couldn’t get it there in the first place.

To be fair, given the Crows had a ludicrously-low 36 forays inside 50, Eddie Betts’ solid three-goal return to form looks even more impressive, if fairly routine by his halcyon-days standard.

But since last week I suggested it might be time to give Eddie a run in the twos, it’s probably worth pointing out that I was quite deliberately employing a clever Mindfulness technique referred to by psychologists as ‘reverse psychology’, which clearly had its intended effect. No need to thank me or anything: Eddie’s three goals were reward enough.

We can only hope he carries that newfound form into his 300th on the weekend against the Suns because, frankly, Eddie having an underwhelming milestone game against a side to which we’ve never previously lost would probably do it for me this season.

But, of course, it’s logical to assume the same Reverse Psychology technique will work again this week, in which case let me just say this: the Crows should immediately drop Josh Jenkins and Tex Walker.

Mind you, there are roughly 10 to 15 more who on current form I’d happily see the back of.

In fact, is it too late to sack everybody involved and start the whole club again?

Because at this point it’s hard to see from whence any meaningful improvement can come.

We get near-daily assurances that Jacobs is not far from returning, but I somehow suspect swapping out one of the handful of guys who was having a genuine crack on the weekend for an out-of-form veteran isn’t the answer to all our woes. 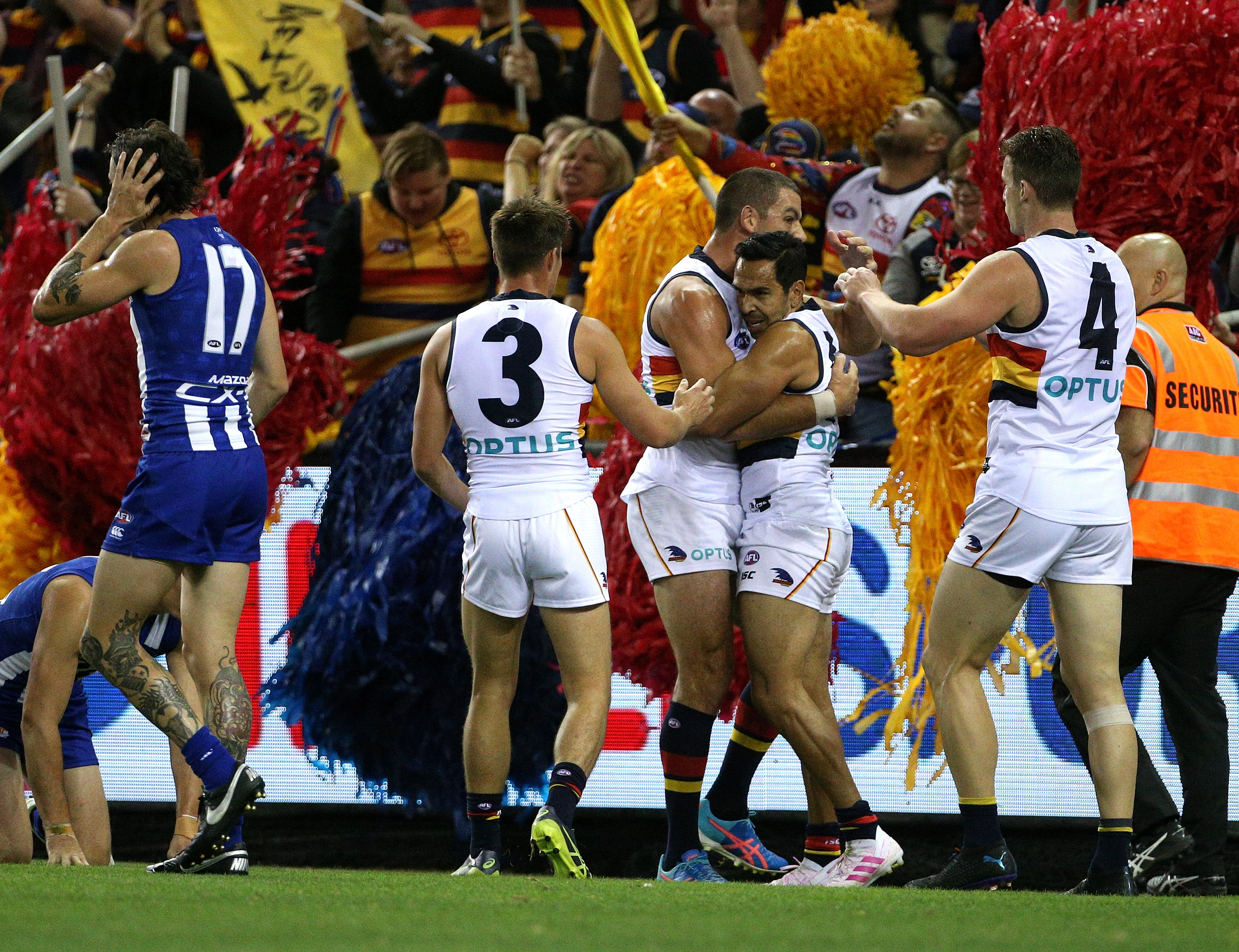 Eddie is congratulated for being the Least Bad Crow on the night. Photo: Hamish Blair / AAP

It should not all have been so very surprising, of course… we should have guessed during Friday night’s slog between Melbourne and Sydney that all was not well with us.

The irony is, this is the one season I would have actually quite enjoyed watching Carlton get thrashed every Friday night, but instead we got a helpful reminder that the only team we’ve beaten this year is probably Not Actually Very Good. 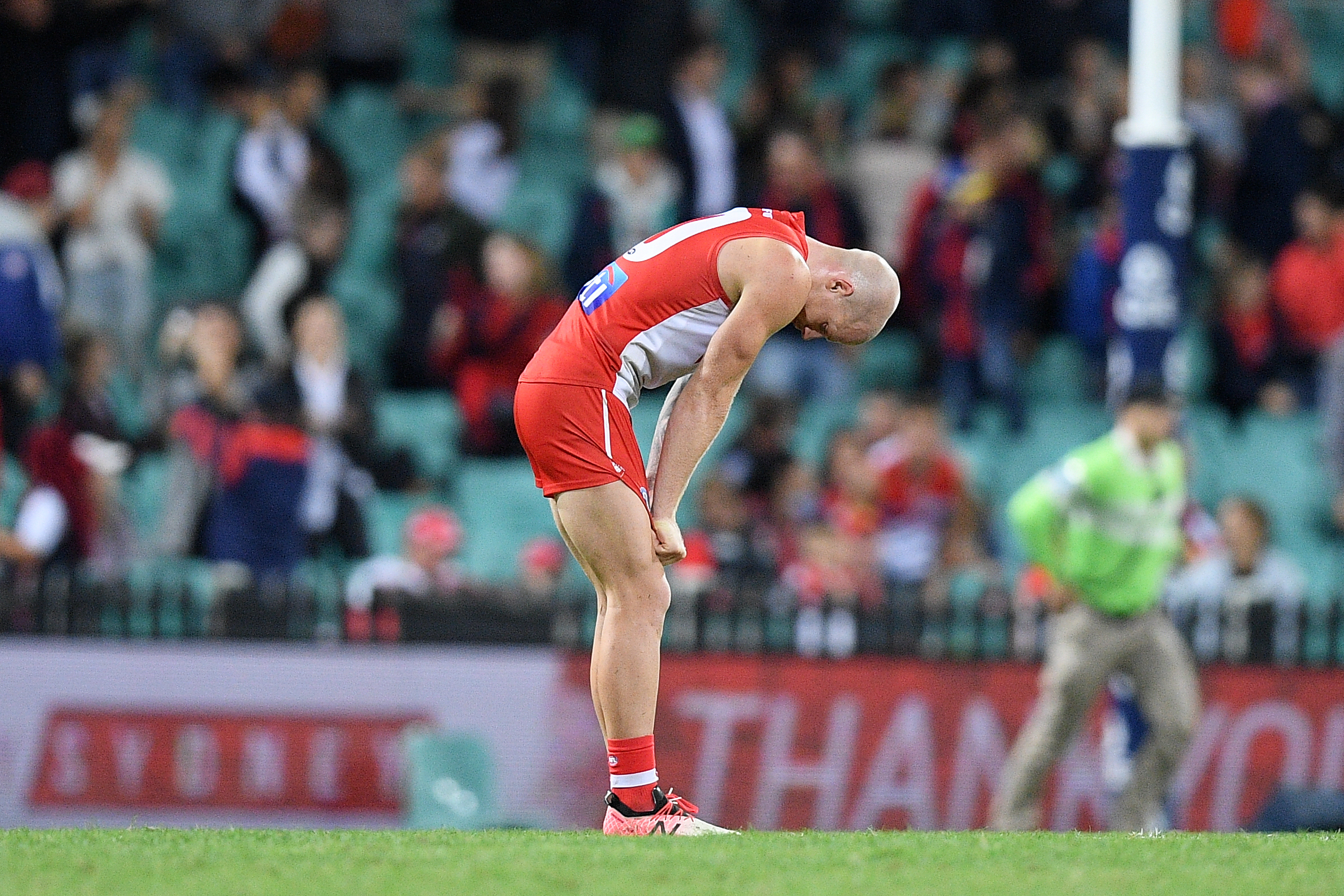 According to the ladder, we are still better than the Swans. By a very small margin. Photo: Dan Himbrechts / AAP

Worst of all, though, was the fact that Adelaide’s immense incompetence prevented us from making much of the fact that Port lost at home to the Richmond reserves. 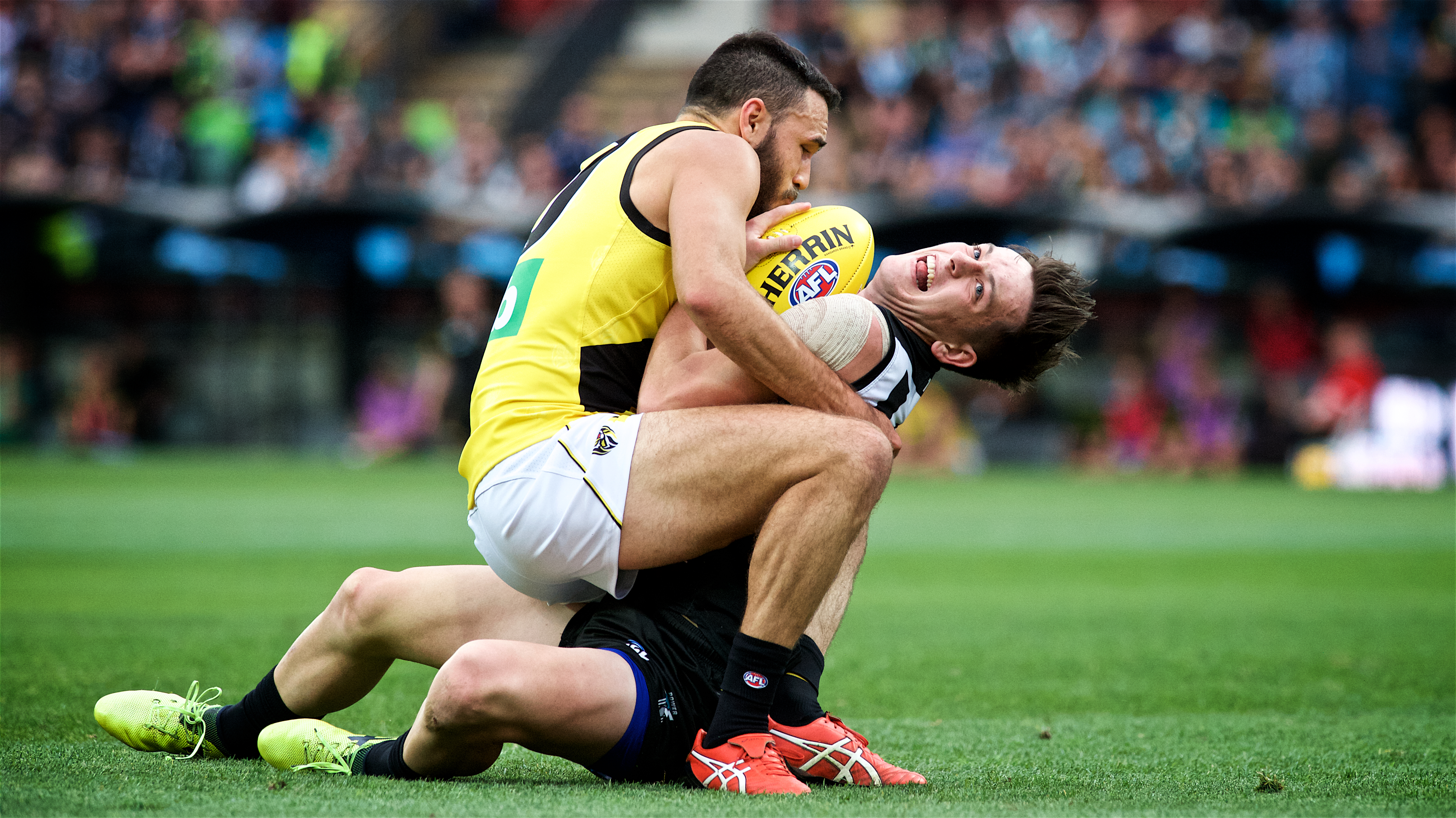 Yep, the Tigers – missing the likes of Trent Cotchin, Dustin Martin, Jack Riewoldt, Bachar Houli and Alex Rance – turned up to play at Adelaide Oval, living up to the spirit of the motto inscribed across the banner through which they entered the ground. 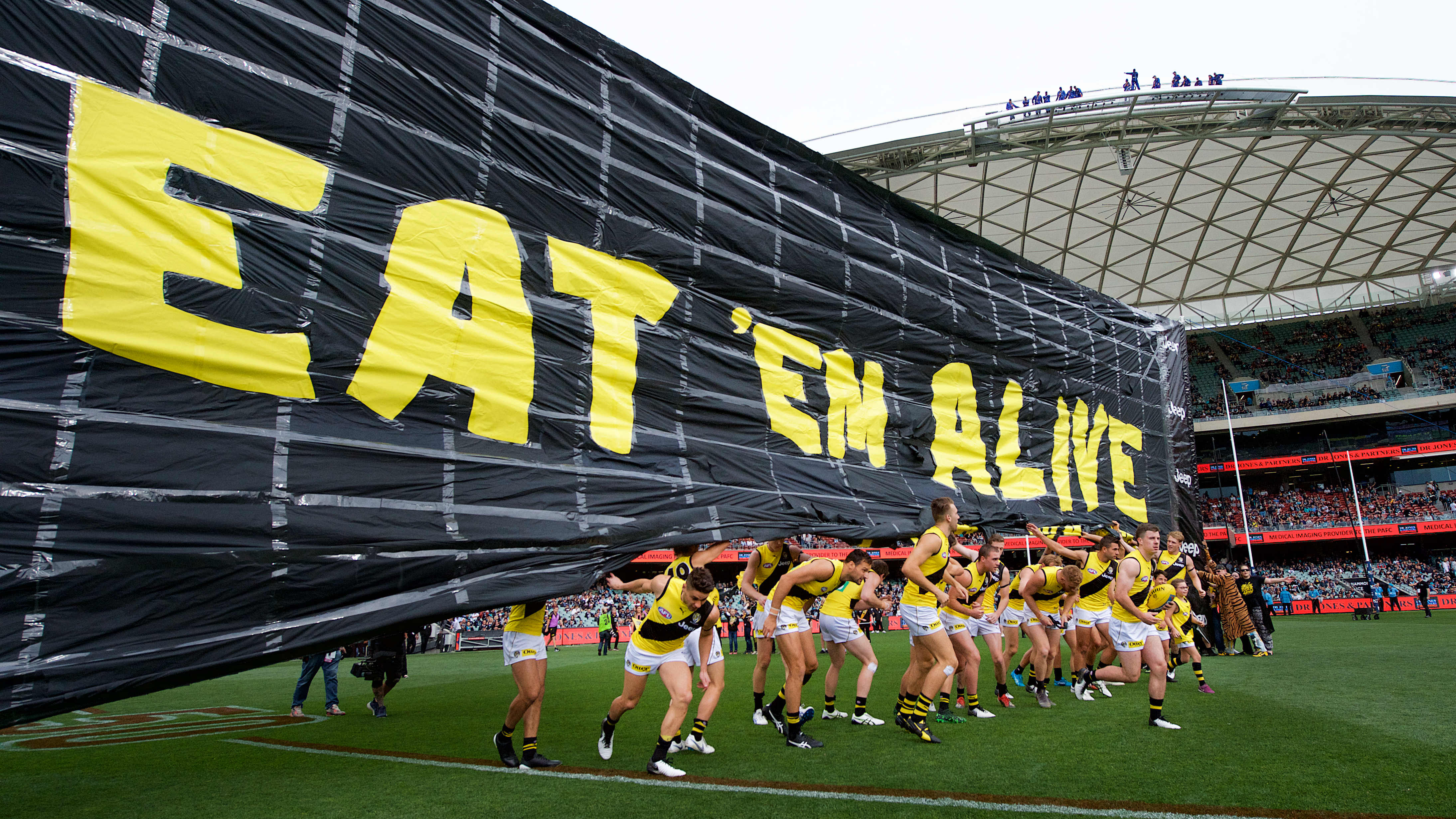 Of course, Port’s banner was also very inspiring in its own way. 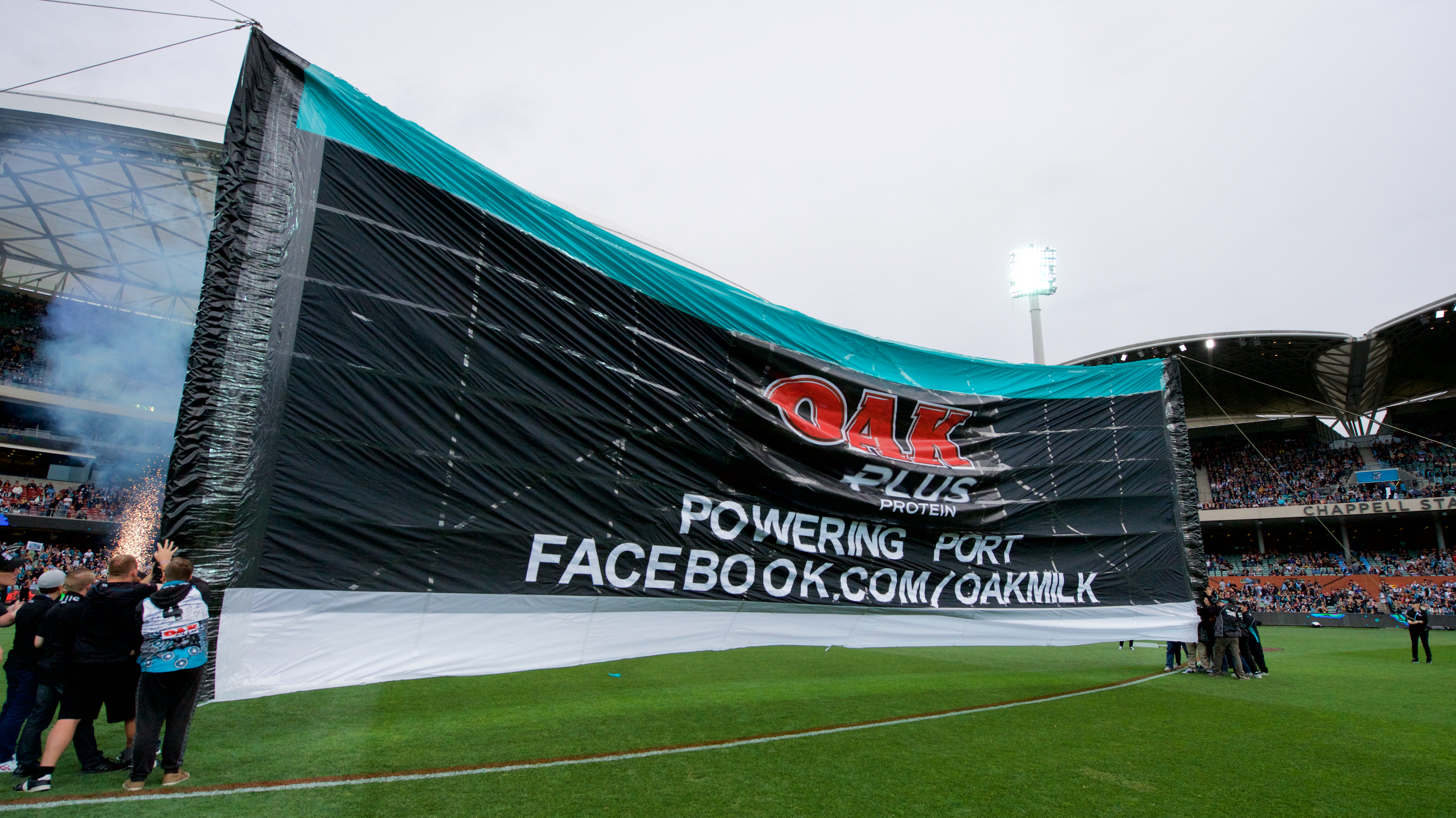 With any luck, Port’s 2019 strategy of hoping its first-year players will maintain a consistently high output over 22 rounds will quickly wear thin, and they’ll soon fall into line with preseason predictions. If only Adelaide could do the same. 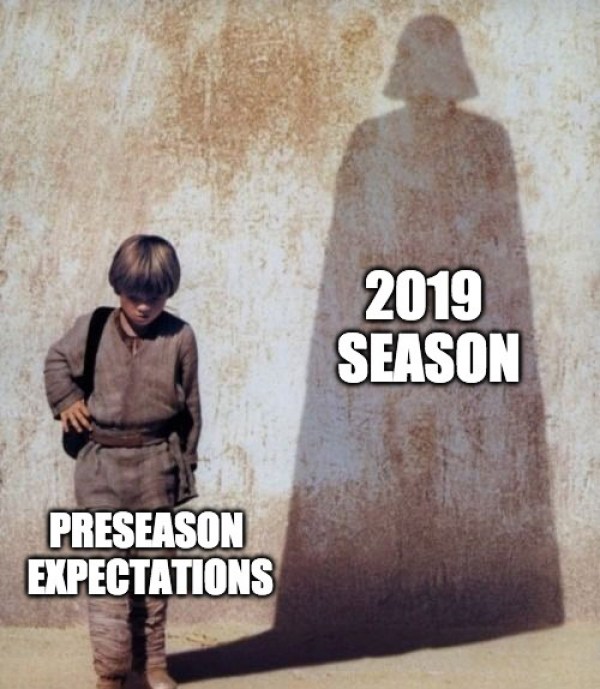 Still, we inadvertently ‘shared a moment’ with Power supporters last week, when the AFL released its Round Three nominees for the Goal of the Year – featuring both Carlton’s Mitch McGovern and Hawthorn’s Chad Wingard.

It’s strangely comforting to be able to savour the sour grapes together once in a while.

Anyway, fortunately Anthony McDonald-Tipungwuti ended up taking out the prize…

For indeed, we must look on the bright side every now and again (and not in a Jack Riewoldt post-Grand Final sort of way).

In hindsight, making that Grand Final was the epitome of the old adage ‘Be careful what you wish for’: for that day and its aftermath have somehow turned a genuinely competent club into a near-basket case.

But if things don’t improve, we can always abandon the AFL and roam the country playing struggling lower-league sides into form.

And if nothing else, most of you can at least be grateful that you don’t have to watch our season miserably implode from Texcoco.