It’s possible, of course, that Mitch McGovern didn’t take the mark of the year during that third quarter on Saturday night.

It’s possible it was merely the mark of the round, and that by year’s end a Jeremy Howe will have taken at least three more breathtaking grabs only to miss out on the eventual prize because it is determined by a popular vote and, as we all know, democracy doesn’t work.

But, still, it was a pretty damn good hanger.

And more importantly, the Gov nailed the set shot thereafter, to helpfully put the home team a morale-boosting 40-points up on the visiting Carlton as three-quarter time loomed.

That’s the bit that’s often overlooked in discussions about the merits of a mark in the forward 50; if it doesn’t lead to a goal, does that fundamentally undermine its worth? Does it tarnish the spectacle on reflection to know that the glorious grab was let down by an errant set shot?

If you ever re-watch a highlights package – as you should, frequently – of the Crows’ greatest ever (non-premiership) win, against Footscray in the ’97 prelim, you’ll obviously see a fair bit of Darren Jarman’s antics in that frenetic final quarter. The standout moment is always the towering mark he took from a soaring Mark Bickley pass as the Crows got a run on, plucking the ball from the air as he rose between two Bulldogs defenders, clutching it in those big mitts as he crashed flat on his back while the crowd rose around him.

But you never see the resulting goal from his subsequent kick.

The reason? There wasn’t one. He shanked it. (Which I won’t hold against him, since he did kinda win the rest of the game for us, as well as the Grand Final a week later, so I’ll magnanimously overlook it.)

But the question remains – does context matter?

Is a left-foot checkside from the boundary when your team is already down by 50 points an inherently better goal than a simple drop punt from a slight angle to pinch the game after the siren?

And the same goes for games themselves.

Time was that I’d celebrate a good win for days; maybe watch it back a few times and marvel at the brutal ballet of it all (obviously, this was back when I had a lot more time on my hands).

Fast forward a few failed finals campaigns though, and any given minor round victory now feels more like an obligatory stepping stone to achieving the requisite pole position for our next September tilt.

There’s an exception, of course – which will be played out this week. And, yes, for the most part, the Crows played on Saturday like a team with half a mind on the ensuing Showdown. Aptly enough, so did Port, albeit with less successful results.

Plenty of pundits are baffled by Port’s flailing fortunes after the club’s pre-season recruiting spree. I mean, who’d have thought after hiring a bunch of notably mercurial players that the team should be so…well, mercurial. 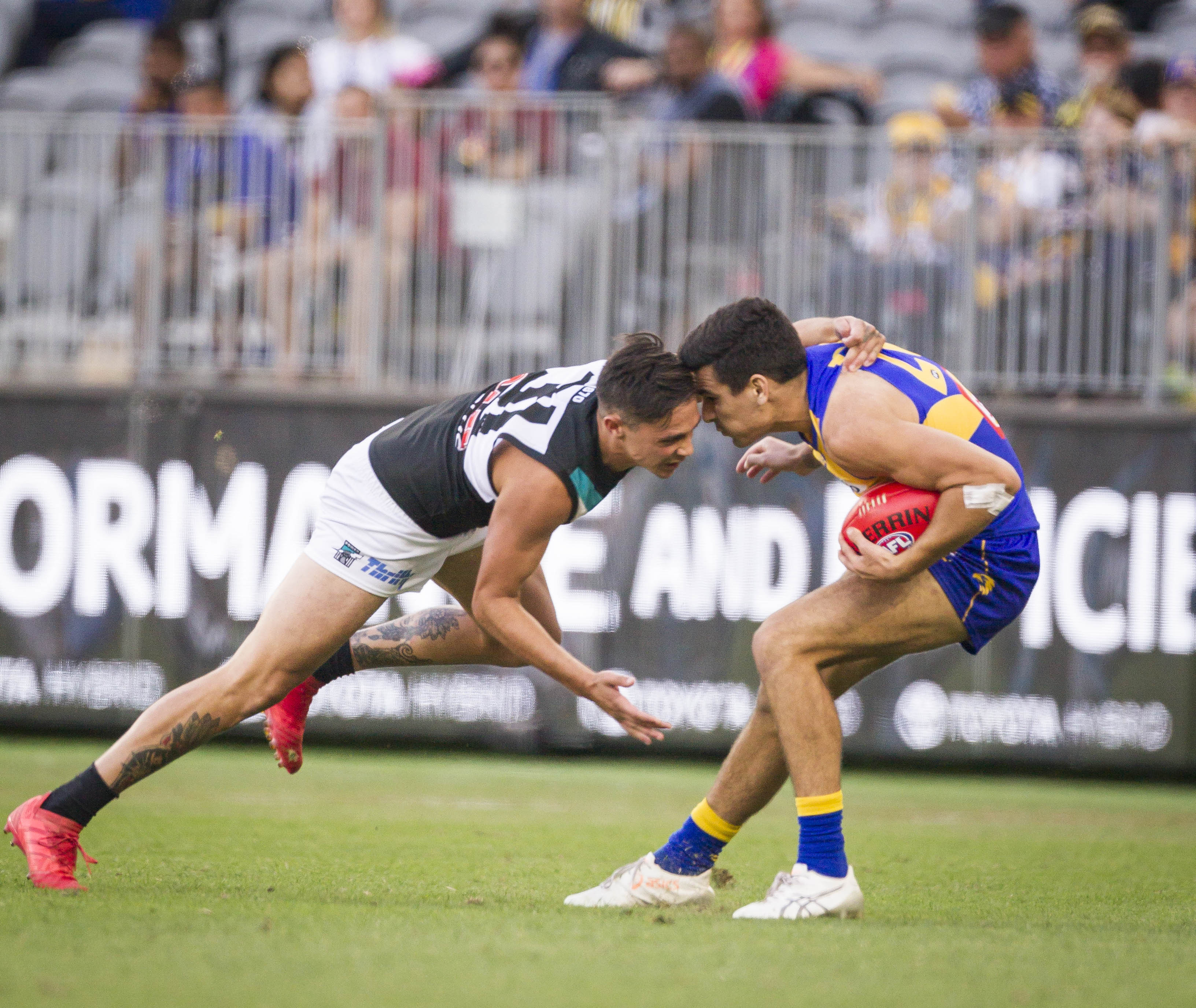 But Showdowns aside, it’s an effort to get too enthused about individual wins these days. Particularly a routine win such as beating Carlton at home by an unremarkable nine goals.

Some of the Blues’ best players still took the field on Saturday night. Unfortunately for them, though, they were all playing for Adelaide

Given the Blues were coming in with an unblemished losing record in 2018, this game never promised much as a contest, although our historic propensity to not bother turning up in such scenarios and cough up an era-defining loss looms ever large (that Fev-led Blues comeback in ’04 springs to mind, as does going down to the Demons in Sanderson’s last season).

To be fair, Carlton’s injury list runs pretty deep but, regardless, some of the Blues’ best players still took the field on Saturday night. Unfortunately for them, though, they were all playing for Adelaide. 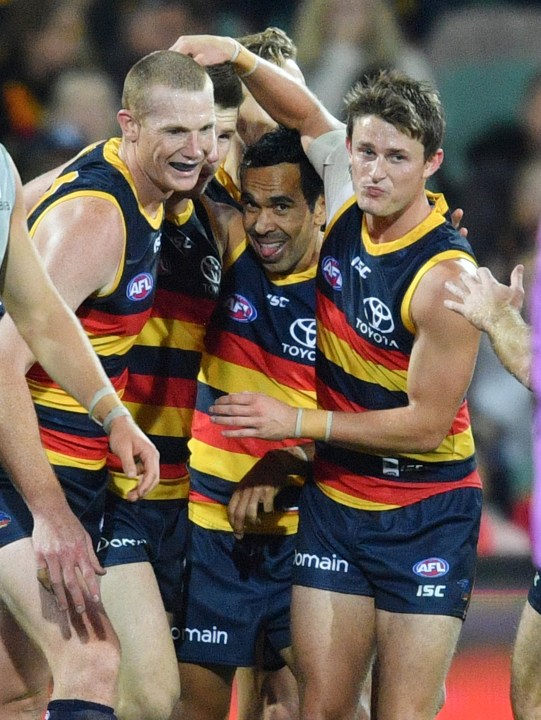 And thus it was that the visitors left with moods to match their away guernseys – grey and dirty. 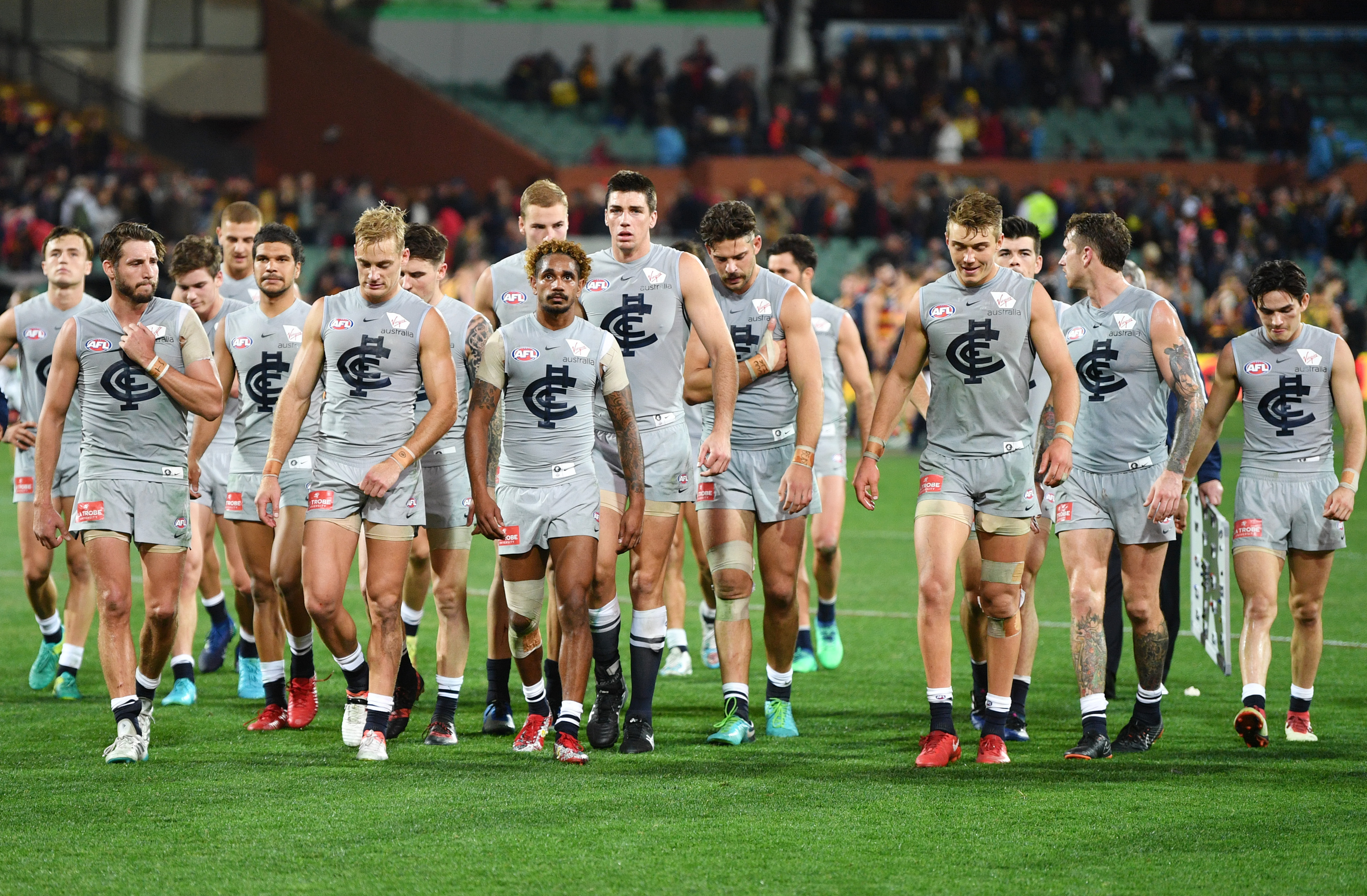 Seriously, what’s with this away strip? Photo: David Mariuz / AAP

But if Carlton’s injury list was burgeoning, Adelaide’s is too.

We lost Milera before half time, with a non-specific soft-tissue ailment located somewhere at the back of the leg, which may or may not rhyme with “jam spring”.

Regardless, it won’t help Don Pyke’s bid to continue his ‘Jim Callaghan’ routine this week in response to the media’s breathless declaration of a “Hamstring Crisis” at the Crows.

This whole hamstring issue was apparently supposed to be sorted by now, with the club publicly declaring it would change a few things around in its fitness program. I can only imagine the high performance boffins misunderstood when Pyke came in and said he wanted “a few tweaks”.

There was a fair bit of talk this past week about the fact Carlton hadn’t played the Crows in Adelaide since, apparently, sometime in the late eighteenth century.

Actually, I checked and it was 2010, which is still a pretty long time between drinks.

So long, in fact, that only three guys who wore Crows guernseys that day are still on the list today. 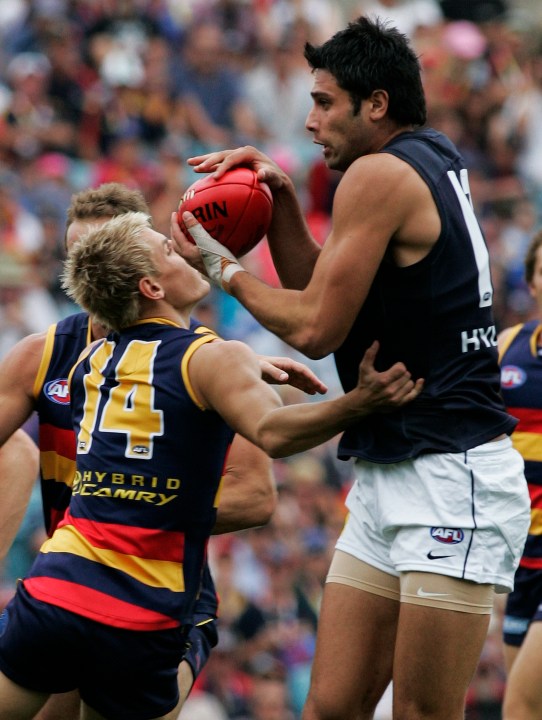 This was one of them. Photo: Rob Hutchison / AAP

Less loudly discussed this past week was what actually happened the last time Carlton jetted to SA to take on the Crows. Which is probably just as well.

Because it was one of the more shitful home game outings we’ve had the misfortune to endure.

Time was that beating Carlton was a big deal in itself

Coming off our fast finish to 2009 (which skidded to a hideous halt on the back of that free kick and goal to Jack Anthony that we never, ever discuss, ever) we reasonably expected big things in 2010. So losing the first three games of the season was, to put it mildly, a bit of a pisser.

Still, playing the then-middling Carlton at home seemed the obvious opportunity to get things back on track.

Unfortunately, no-one at Adelaide seemed to get that memo and the home side started poorly, continued woefully and eventually went down to the visiting Blues by our favourite default losing margin of 48 points.

To be fair, the Carlton loss was but one of six gormless defeats to kickstart that season so, as Pink Floyd would say, all in all ’twas just another brick in the wall.

But it’s worth recalling. Because time was that beating Carlton was a big deal in itself.

The Blues, after all, did inflict our first loss in the AFL – not to mention our first finals loss – both, of course, necessary and inevitable; the former a four-goal home defeat that provided a dose of reality after the giddy fantasy of that account-opening drubbing of the premiership-bound Hawks. And which made a rare seven-point win at Princes Park later that same year – just Adelaide’s second victory in Melbourne – all the more significant.

There have been a few more good’uns in the years since.

A 2001 home romp mainly memorable for Lance Whitnall apparently knocking Nathan Bassett out cold behind play, an incident that wasn’t caught on camera, and prompted a classic passive-aggressive exchange between Kerls and Bruce McAvaney when the grizzled old boundary rider refused to tell him (or us) what had happened because what goes on the field stays on the field or somesuch cliché. Which seemed to somewhat defeat the purpose of having a boundary rider in the first place, but anyway.

Then there was a final-round finals tune-up in ’09 in which Brett Burton did what McGovern may yet manage, and took the bona fide Mark Of The Year (as discussed, he also shanked the subsequent kick for goal, but we were already a mile ahead so never mind).

These days though, there is very little joie de vivre in beating the Blues. Or almost anyone really, come to that.

Early this morning, I was making magnet tile skyscrapers with my four-year-old, who was taking inordinate pleasure in putting the last tile in place and then smashing the entire edifice to the ground, before taking similar delight in building it back up again. For her, the joy was in the process itself.

For us, though, not so much.

These days, the whole home and away season feels like a bit of a tiresome ordeal to be endured before our annual major round disappointment.

And each week, each win, comes with the unanswerable question: was this just another tile in our fragile tower that will eventually come crashing down?

A few weeks back, I was unlucky enough to read the Twitter musing of a random Richmond supporter before his team took Melbourne apart on the MCG. He noted that winning the flag had dramatically changed his psychological perspective of football fandom: he no longer goes to games filled with apprehension. He expects his team to win, and if they don’t, it’s not the end of the world.

I now go into matchday with zero fear about what @Richmond_FC will do. I expect to win. The prospect of a loss isn’t as awful as it once was. Being Premiers has really changed my psychological view on the game. #gotiges #AFLDeesTigers

I felt that way once, for a time, a tick under 20 years ago. It was what made that interminable ‘99 season bearable, as loss piled up on despondent loss.

Much as it pains me to concede, when I think about what we ceded to the Tigers faithful last September, it is not the wild celebrations that I envy most, but rather this ensuing sense of calm composure. The knowledge that, whatever happens, you’ve gained something that can’t be taken away.

Most every other victory in football can be undone by future incompetence, by the inevitable truism that you’re only as good as your last win.

Which is why the context remains critical.

A solid percentage-boosting win is all well and good but, like the Gov’s Mark Of The Year contender, it’s what comes next that matters.

And that’s how we will finally define what this win was worth.