I mean, there are plenty of random reasons one can find for disliking certain football teams – none of which have anything to do with football and many of which could comfortably apply to the Saints. For instance: don’t like the coach (Ross Lyon), captain is a bit of a sook sometimes (Nick Riewoldt), full forward looks like a henchman from a 1970s British gangster movie (Fraser Gehrig), marquee player has a name that you always confuse with that actor from Star Wars (Aaron Hamill).

But for all that, over the years, there were things about St Kilda that were rather endearing. Like the time they lost a Grand Final to us, for one.

But also, of course, Nicky Winmar’s iconic stand against the racist barrackers at Victoria Park. Or the time Max Hudghton cried after the Bulldogs claimed a one-point comeback victory to extend the Saints’ millennial winless streak.

And that time Gehrig used his index finger and some spittle to wipe a smudge of dirt off Hamill’s face mid-game, much like I sometimes do when I’m dropping my six-year-old off at school. 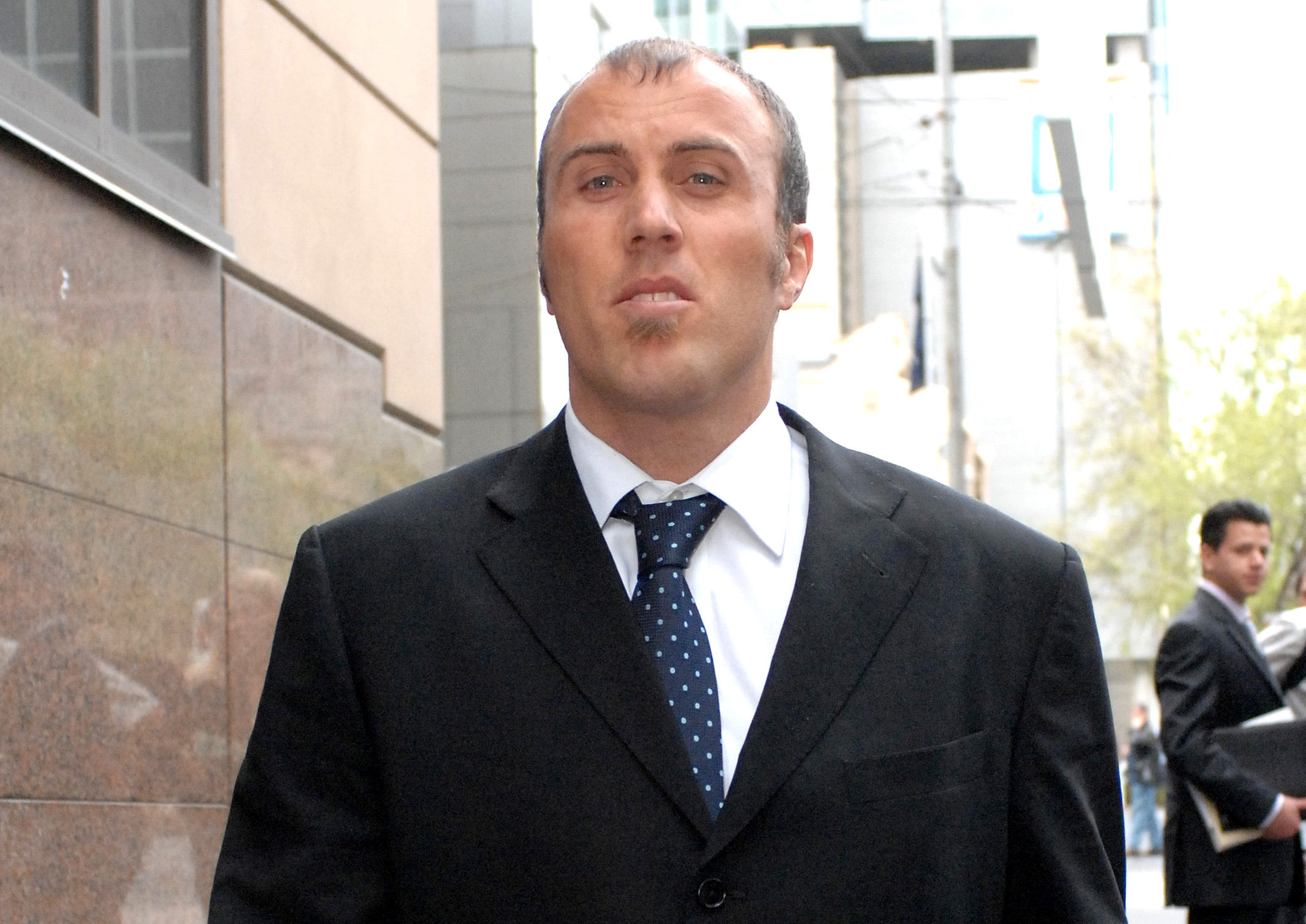 THUG LIFE: Fraser Gehrig looks like an extra from The Long Good Friday, which is coincidentally what St Kilda had a week or so ago. Photo: Julian Smith / AAP

St Kilda also, rather charmingly, once beat Port Adelaide by 10 goals halfway through the 2000 season in what was at the time regarded as the battle for the wooden spoon, given both sides had just one win and two draws between them to that point of the year. Unfortunately, Port didn’t get the memo and went on to win six of their last 10 games – including a fairly embarrassing eight-goal Showdown thumping in Round 22 – leaving the Saints to take home the 26th of their 27 wooden spoons (though they picked up Riewoldt with the accompanying #1 draft pick, so swings and roundabouts, I guess).

But the point, in my usual drawn-out way, remains: I don’t really have anything against St Kilda. 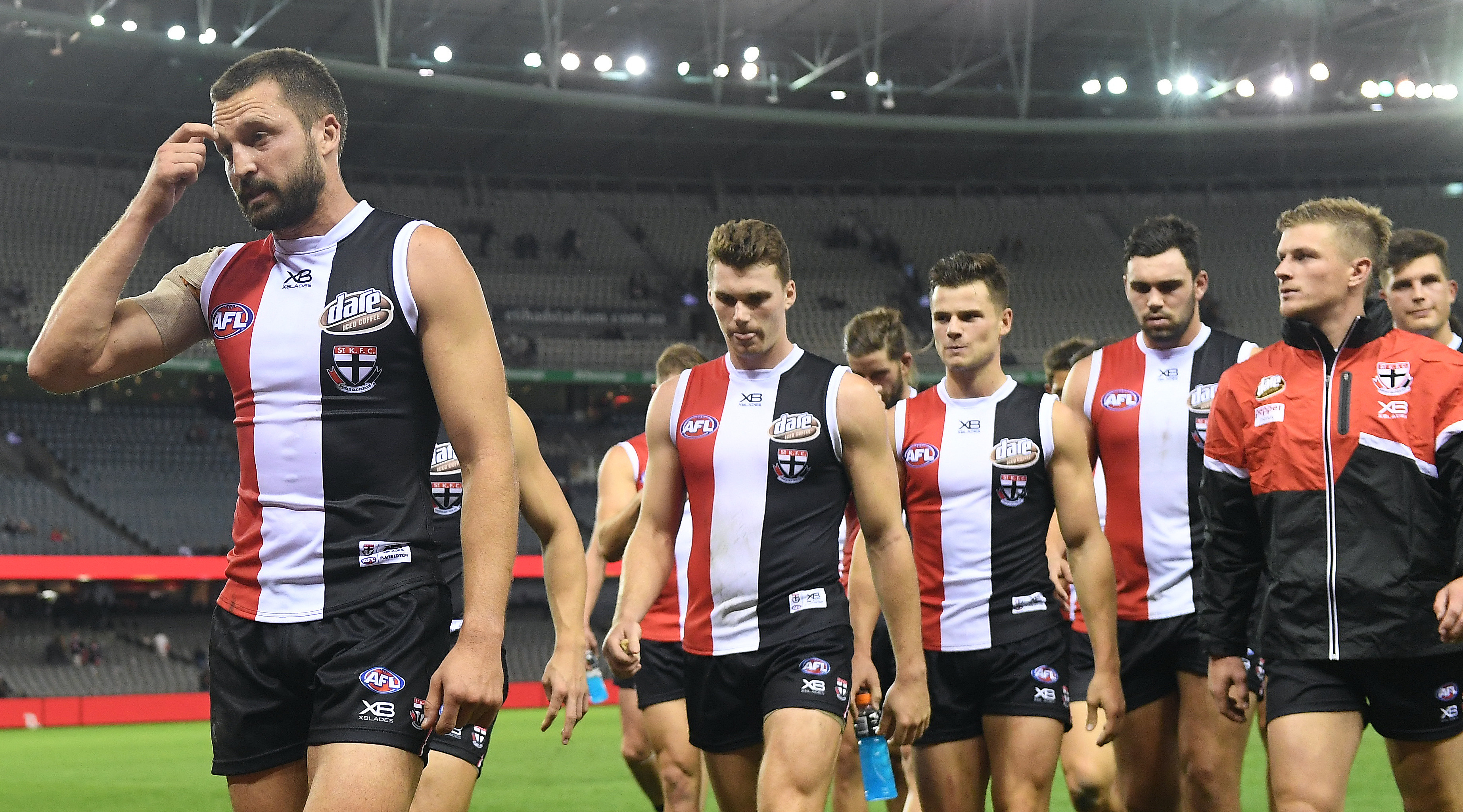 Even the early-90s demolitions they used to dish out to us feel more like some affectionate rite-of-passage after all these years.

Sure, they humiliated us so badly that we sacked our coach in 2011, when our three goals and six behinds for the match somehow didn’t turn out to be what you’d generally call ‘a competitive total’.

But to be fair, we once humiliated them so badly that they sacked a coach too (our former premiership coach Malcolm Blight, as it happened) so maybe it evens out.

And anyway, we haven’t dropped a game to them in the eight matches since Neil Craig left, so it’s hard to make a case that we’ve been Hard Done By in the St Kilda stakes.

But then, I don’t recall even disliking them overly much during their late-2000s-era purple patch either, when we routinely lost to them – possibly because that’s what most teams did back in those days. As if you wouldn’t have lost the odd game to a team boasting Riewoldt, Koschitzke and Milne up forward, Hayes, dal Santo, Montagna and Ball in the middle with Steven King and Michael Gardiner in the ruck, Goddard wherever Goddard went and a backline featuring Sams Fisher and Gilbert and…um… Zac Dawson.

(It’s also possible, since the few years of St Kilda dominance coincided with my brief flirtation with AFL Dream Team, that this happenstance made me more sympathetic to the Saints of this era, since so many of them contributed to the premiership-winning run of my fantasy team, Touch Of The Fumbles.)

In hindsight, though, the Naughties-era Saints (which, considering the whole ‘schoolgirl’ debacle, is probably an appropriate moniker) must be one of the best sides never to win a premiership. Particularly when you stack its star-studded ilk up against the St Kilda side that took the field against Adelaide on Saturday night, a team sheet that reads like a Who’s Who of football players you’ve kind of heard of but almost certainly wouldn’t recognise if you bumped into them on the street.

Half of them sound like refugees from a long-lost Jane Austen novel (I include on this list Blake Acres, David Armitage, Dylan Roberton, Jack Billings, Jack Sinclair, Jack Newnes, Jade Gresham and Nick Coffield), whereas we obligingly dropped our most Pride and Prejudice-sounding character, Darcy Fogarty, before the game.

This, incidentally, created some minor consternation, given big things are expected of ‘The Fog’ by dint of the fact he was allocated the Number 32 guernsey sometimes associated with Reasonably Good Players at the Adelaide Football Club. Impressively, he overtook Bruce Lindsay’s goal-kicking tally with his first ever kick in the AFL. Unfortunately, though, his momentum-halting demotion after two rounds means he is currently mired on four goals, in a tense tie with another famous former Number 32, Troy Menzel, who may have the dubious distinction of being our least successful trade from Carlton, but still makes my top five of former Number 32s. (Yes, there are only four of them). 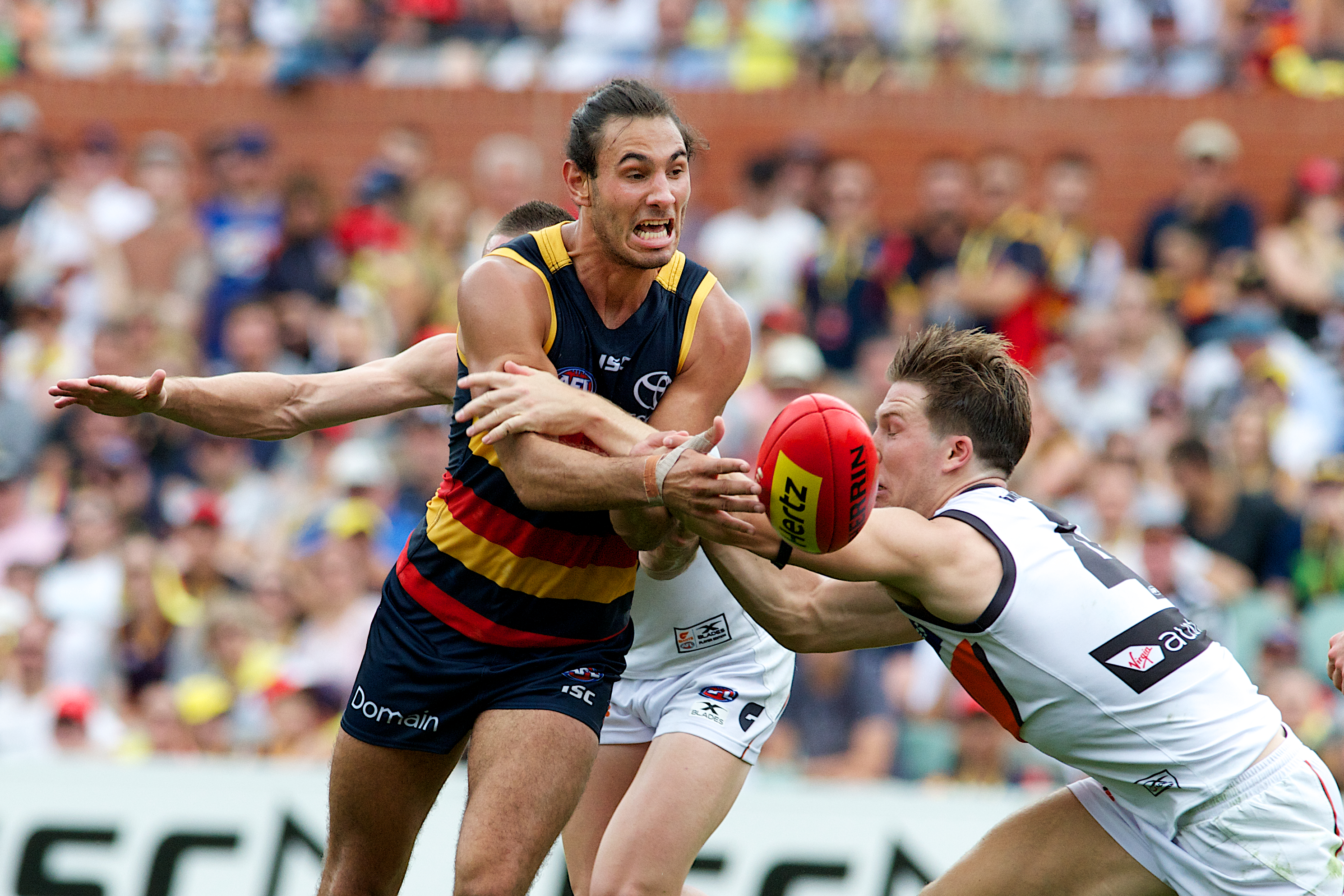 Anyway, the loss of Fogarty left poor old Hugh Greenwood fighting a lone hand in the battle of Names That Sound Like Characters From Romantic Era English Novels, but fortunately this didn’t seem to hurt us on the scoreboard, at least after about the halfway mark of the third quarter.

It was nothing to Facetime home about, of course (and in Eddie Betts’ case, more interesting things were happening at home in any case). 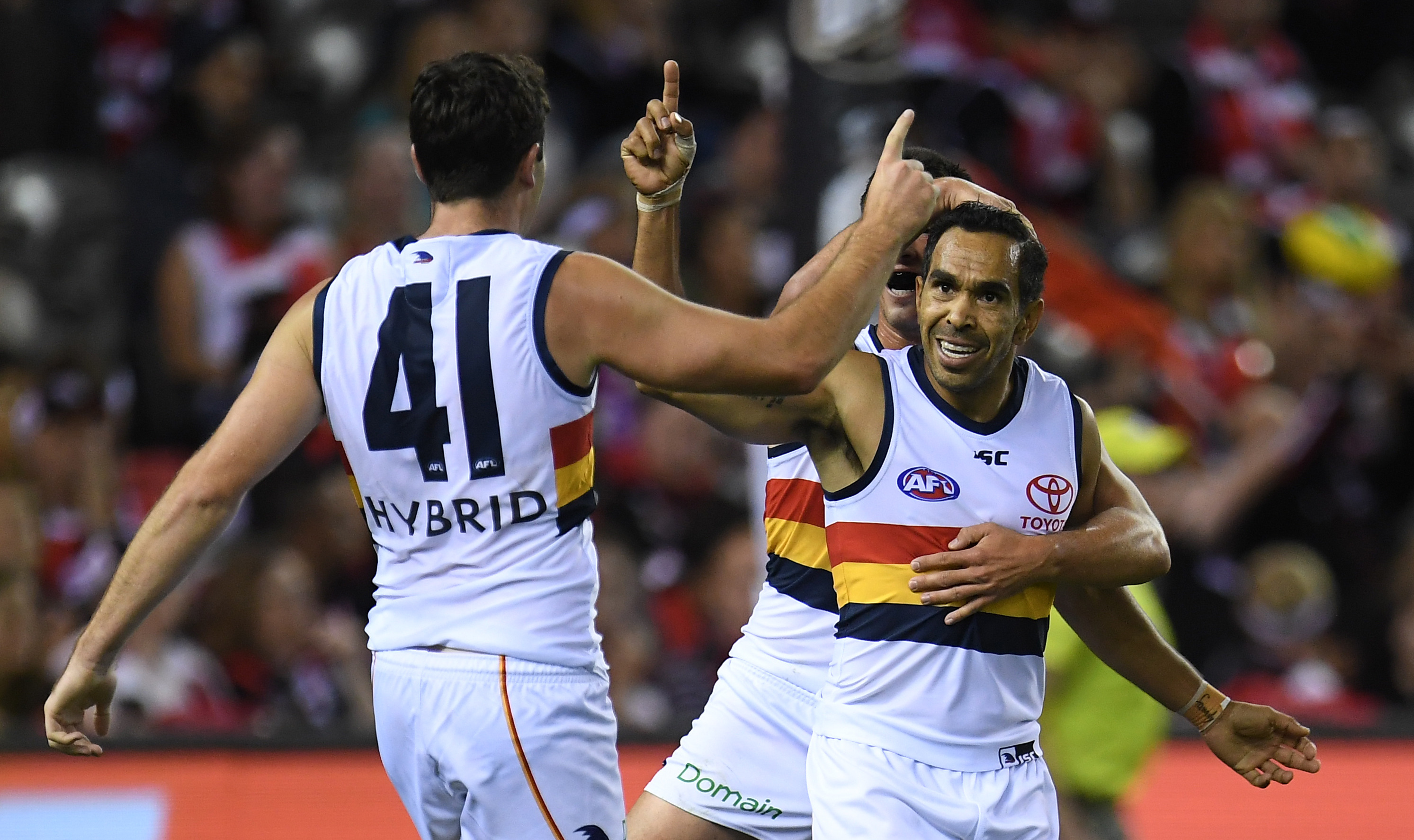 But as Port Adelaide would probably agree this week, an ugly win is still a win.

Power supporters are now in the awkward no-man’s land between wanting to brag about Port being the only side in the AFL still undefeated after three rounds, and wanting to forget all about That Time They Almost Lost To Brisbane At Home.

Much as I talked them up last week, Port were flat as a tack all afternoon and probably didn’t deserve to prevail. Hell, even the umpires thought so.

Although, one must admit it’s quite validating after Port only bothers showing up for one quarter and falls over the line following a goalless final term to see their supporters take to social media to blame the umpiring.

I thought that was meant to be our thing? 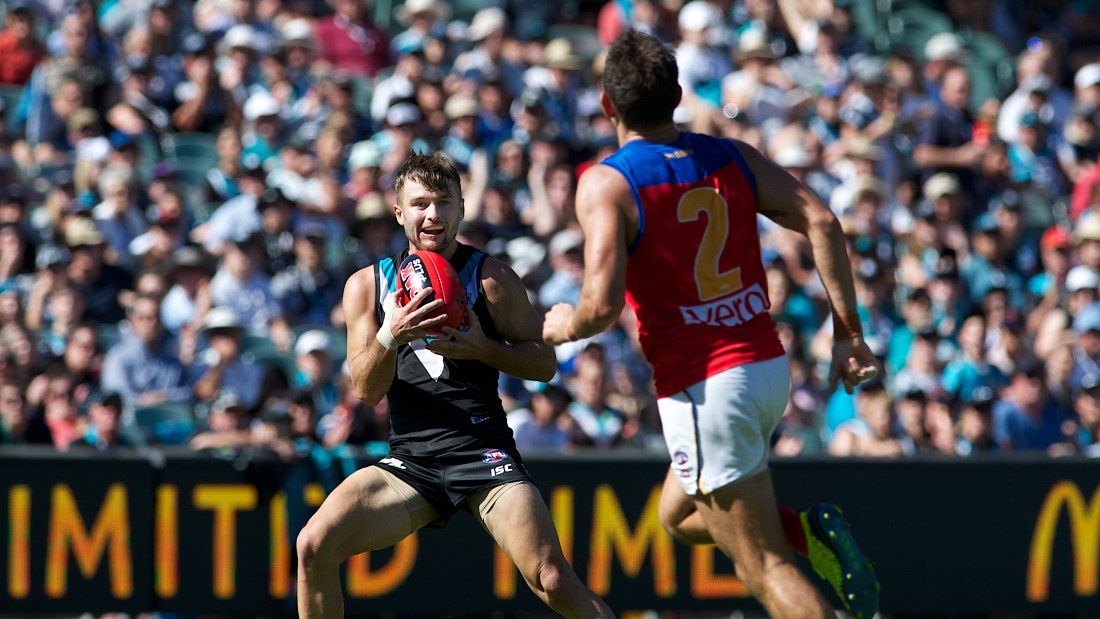 But let’s be honest, Port being on top of the ladder after a performance like that is like Donald Trump being president: the incumbent doesn’t really seem worthy of the title.

This was one of those incredibly frustrating matches to endure: you kind of knew you’d end up annoyed, but you couldn’t help watching anyway just in case the Lions pulled it off.

On the siren, it was a bit like the feeling you had when you’d just seen Inception: like you’d sat through two-and-a-half hours only for the thing to finish before the big payoff.

Both SA teams, then, had wins – but the kind of wins you almost feel guilty celebrating. More so because they were at the expense of two teams for whom it’s hard to muster much animosity.

The lot of the Saints supporter makes our Adelaide travails seem like a five-star cruise by comparison.

In the years since we beat them to the flag, we may have lost three elimination finals, four semi-finals, four preliminary finals and one grand final – often in heartbreaking, last-gasp fashion.
But their track record of three elimination finals losses, one semi-final exit, three prelim heartbreaks and two grand final failures – one on the back of a draw the previous week – is nothing to sneeze at either. And given their sole flag – won by a solitary point – came some three decades before we cost them a second, it’s hard to think of Saints supporters without recalling that line from the movie Se7en: “He’s experienced about as much pain and suffering as anyone I’ve encountered, give or take… and he still has hell to look forward to.”

So it’s probably reasonable now to consider the ‘97 Grand Final ancient history from a team rivalry point of view (and, let’s face it, from every other point of view as well).

But to be honest, I’m not sure I ever considered it a sticking point in our relationship with the Saints.

I’m sure their supporters see it differently.

Indeed, I recall reading an opinion piece in (I think) The Age by a St Kilda sympathiser back in 2007, some 10 years after their Grand Final loss and during the first season of Lyon’s semi-glorious reign, wherein – after the Saints beat the visiting Crows by two points – the author recalled a phrase coined by Raymond Carver, calling the victory A Small, Good Thing.

A minor act of atonement, a belated balm for a long-scarred-over wound.

Nothing to get carried away with, but a comfort nonetheless.

That’s probably how we should consider Saturday night’s win too.