Nope, in fact I think I can safely say that there is nothing in this world better or more satisfying than watching your side prevail in a Grand Final rematch.

September glory be damned; give me round two at home any day of the week. Or on the Thursday before Easter, specifically.

Which is not to downplay what was a significant win: with a third of the starting lineup unavailable and two men down and counting mid-game, the team dug deep.

Josh Jenkins seized his moment, thoroughly making amends for his egregious performance in last year’s decider by dominating his more fancied opponent to kick five crucial goals. In a much, much less important game. 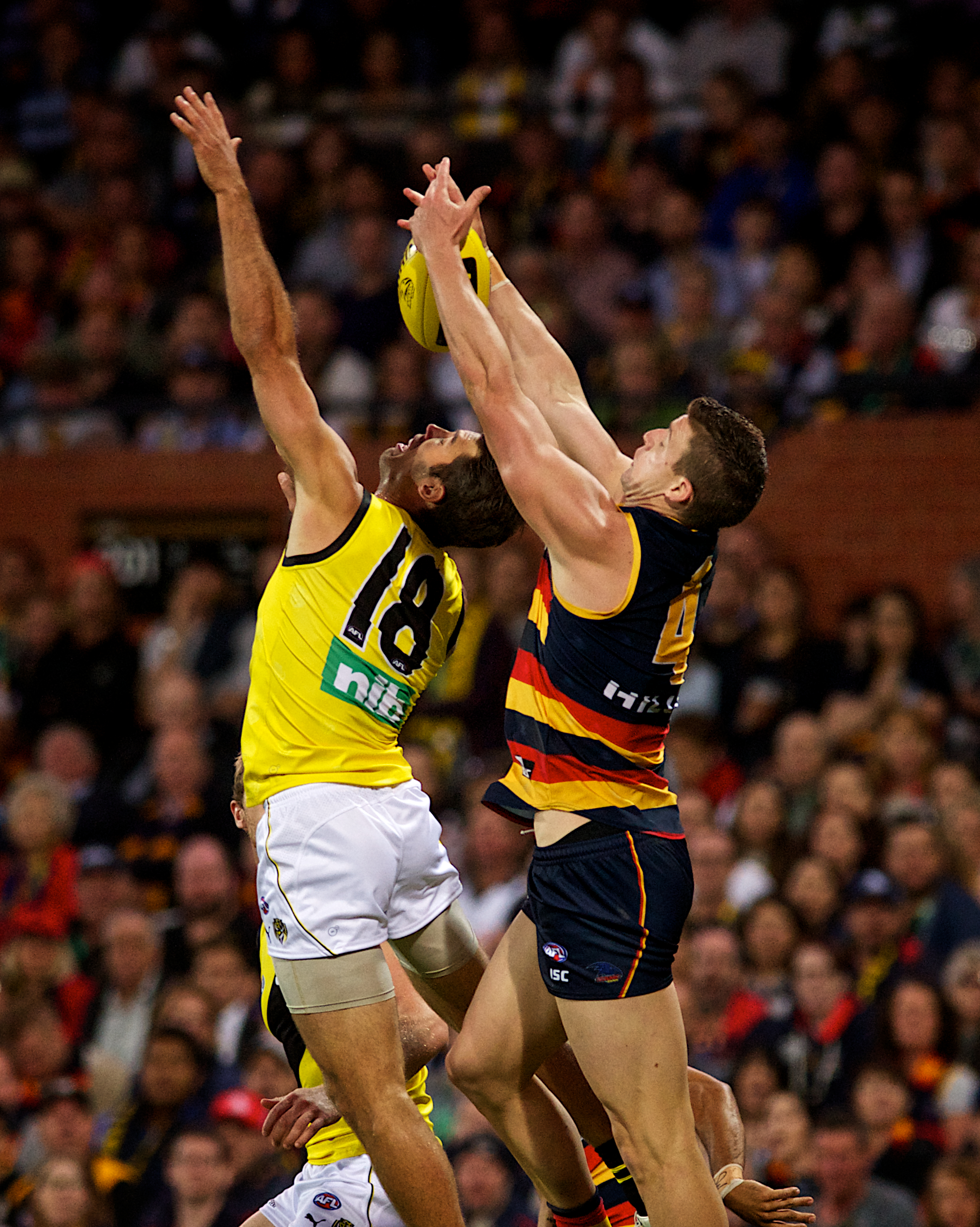 Tex, too, banished his listless Grand Final form with an imperious performance that showed glimpses of his swagger of old.

So much so that one must ponder what’s changed so dramatically between the September surrender and last week’s fortitude (besides the two games noticeably having been played at quite different venues).

And the answer is obvious: Mind Training.

News started to filter out during the week preceding the Richmond clash of strange goings-on at the Crows’ pre-season camp.

Apparently the club made a bunch of people travel interstate and then did things that made them feel confused and distressed, before making them listen to the Richmond club song over and over again. 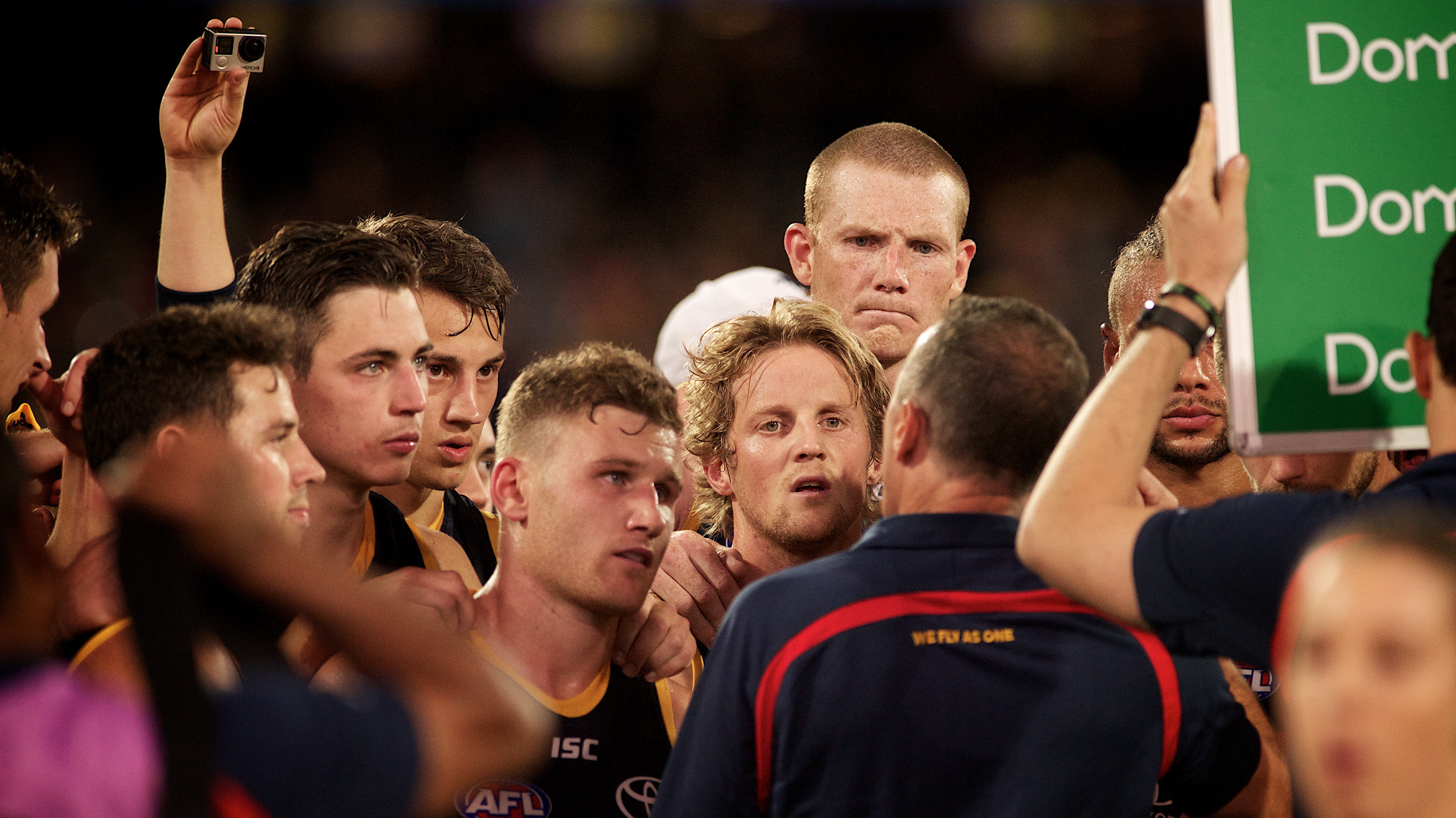 “Look into my eyes – you are getting sleepy…” Don Pyke applies some Mindfulness Training to his players at the huddle. Photo: Michael Errey / InDaily

There were persistent media suggestions that a few players were left traumatised by the methods employed by the ‘mindfulness’ therapists – a mob named ‘Collective Mind’, who I’m pretty sure also did that song in the ‘90s that went “Whoa oh, heaven let your light shine down”.

According to one report, players were made to fill out “emotionally upsetting questionnaires”, although it’s quite possible this just referred to that form in the hotel room which asks you whether you want the full or continental breakfast, which we can all agree is quite the conundrum.

Of course, these players should really look on the bright side. At least they only lost to Richmond. Imagine if they lost to a team like Fremantle and had to spend hours on end with “Free-oh way to go, hit ‘em real hard, send ‘em down below” on auto-repeat.

Mind you, I did feel the players being forced to watch hours of footage of Jack Riewoldt singing Mr Brightside was probably excessive.

Anyway, the whole affair was so controversial it immediately rocketed into the top three of Adelaide’s Stupidest Pre-Season Camps, although obviously it’s still miles off the one where we actively maimed key players.

Nonetheless, Thursday’s win, as they are wont to do, did come at a cost, with the medical rooms kept busy. Reigning club best and fairest Matt Crouch is out for a stretch, while D.Mac copped a knock to the head and left the field, no doubt singing the Richmond club song. There was also a bizarre altercation when Tigers mentor Damian Hardwick paid a subtle tribute to former Crows coach Gary Ayres by remonstrating with an opposition supporter on his way down the race. 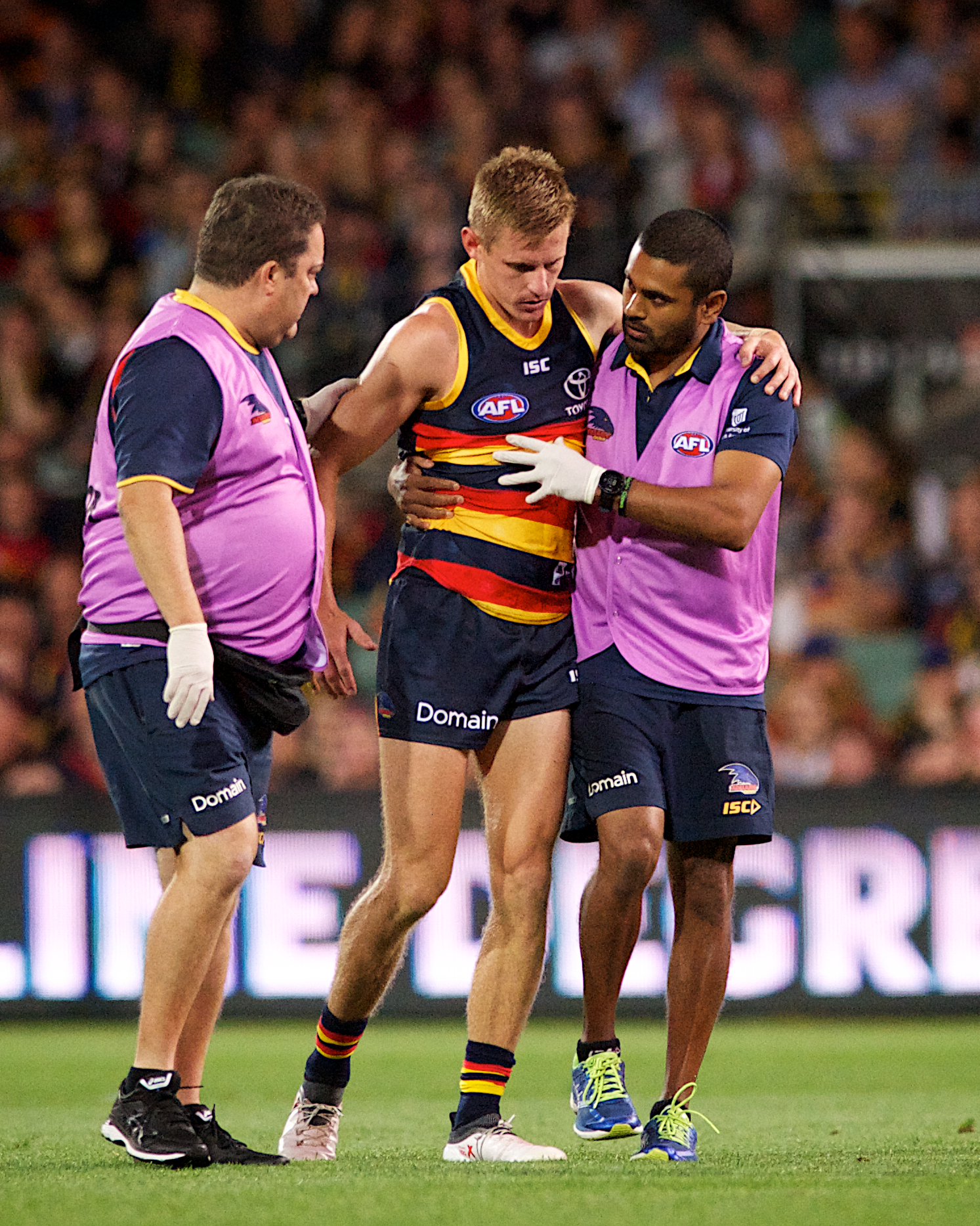 Reports are mixed about what was said by the Crows fan that sparked the incident, but police records reportedly state he informed the Tigers honcho that “we are not at the MCG now”. A perfectly helpful piece of orienteering advice, I’d have thought, but it seemed to instigate a minor kerfuffle nonetheless.

It also led to a lot of Victorian commentary about how this kind of thing doesn’t happen at the MCG. Which seems self-evident, really. A supporter calling out “we’re not at the MCG” when you are in fact at the MCG would just be weird.

However, fear not: our Fumbleland investigators have been on the case and through a combination of witness interviews, enhanced audio recordings and expert lip-reading, we have been able to piece together an exact transcript of what was said during the exchange, and we can now reveal exclusively that the alleged verbal stoush never even took place. 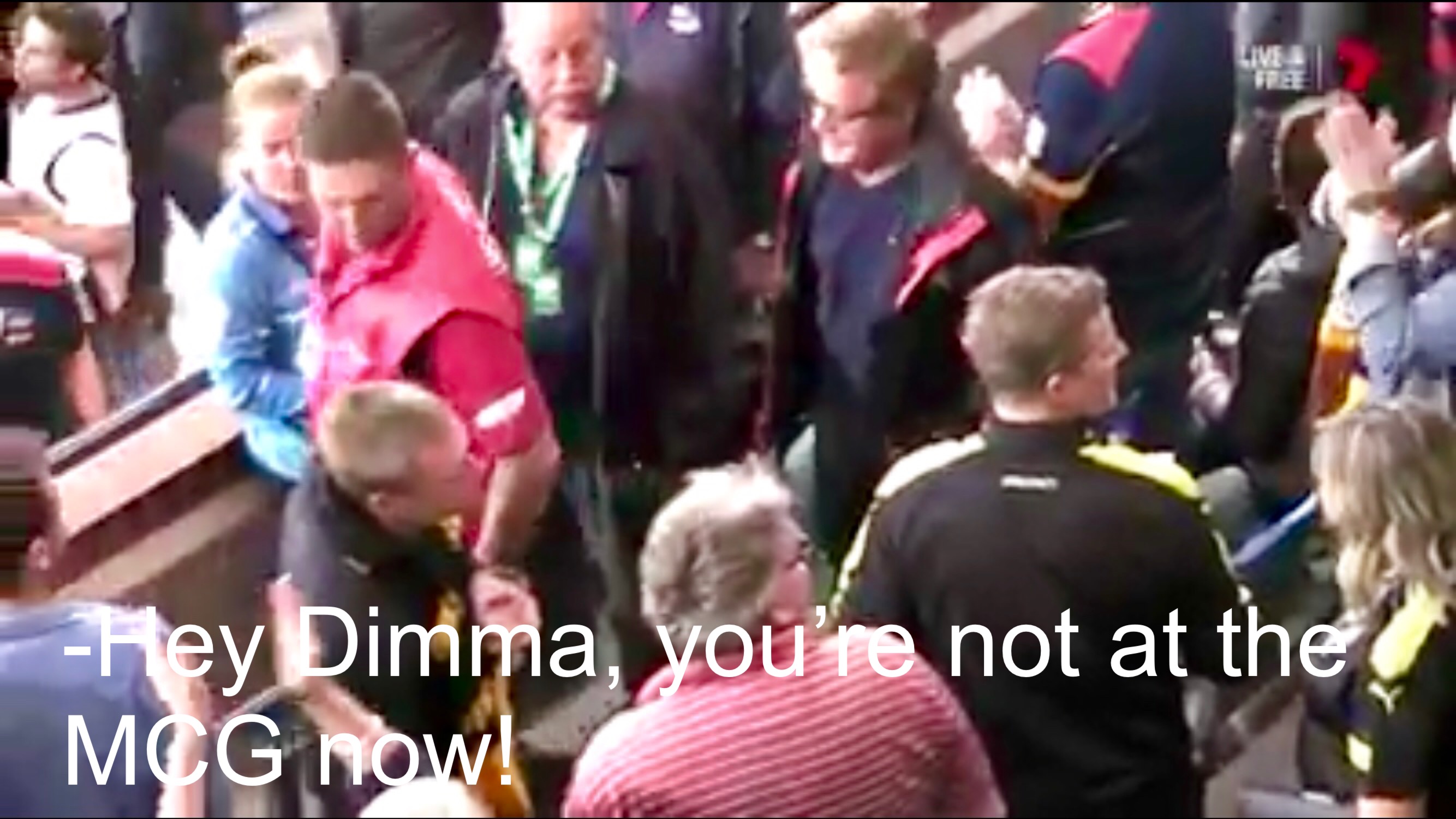 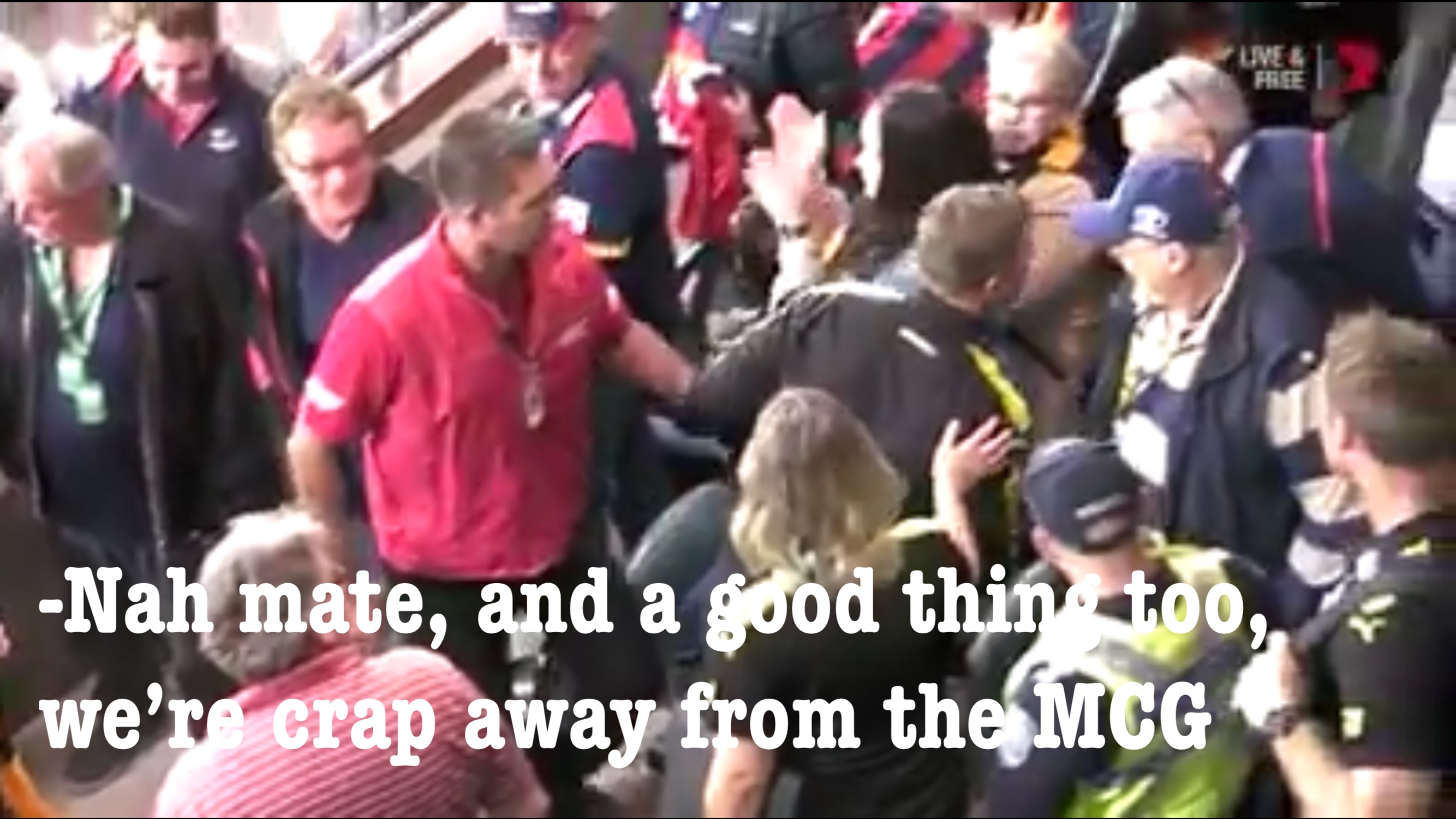 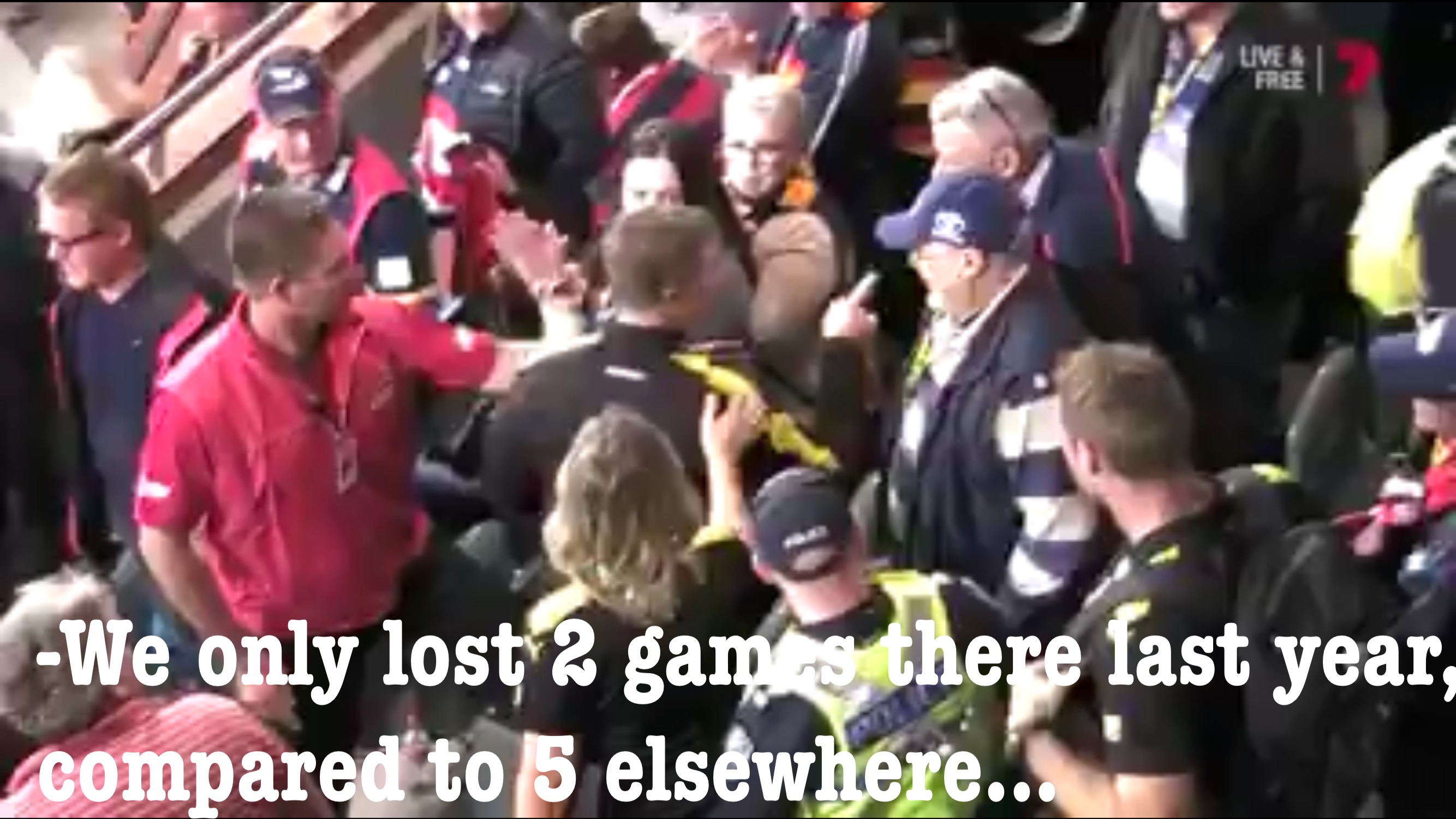 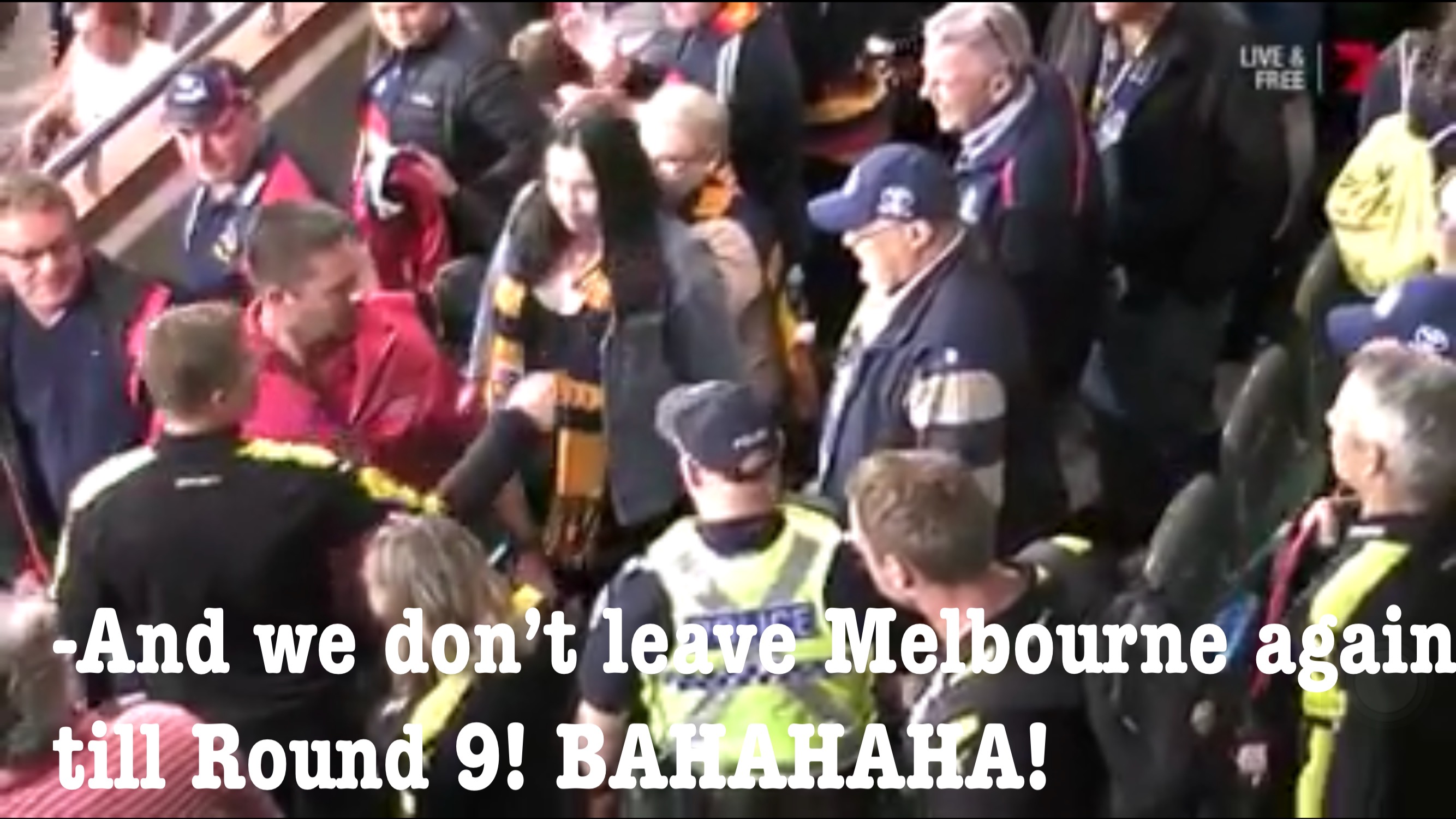 There you have it: a perfectly cordial, friendly discussion about home-ground advantage.

Which, let’s face it, cannot be understated.

No, I’m quite confident that there is nothing whatsoever significant about beating the Swans at the SCG and we should certainly not read very much at all into Port Adelaide’s apparently convincing weekend win there. 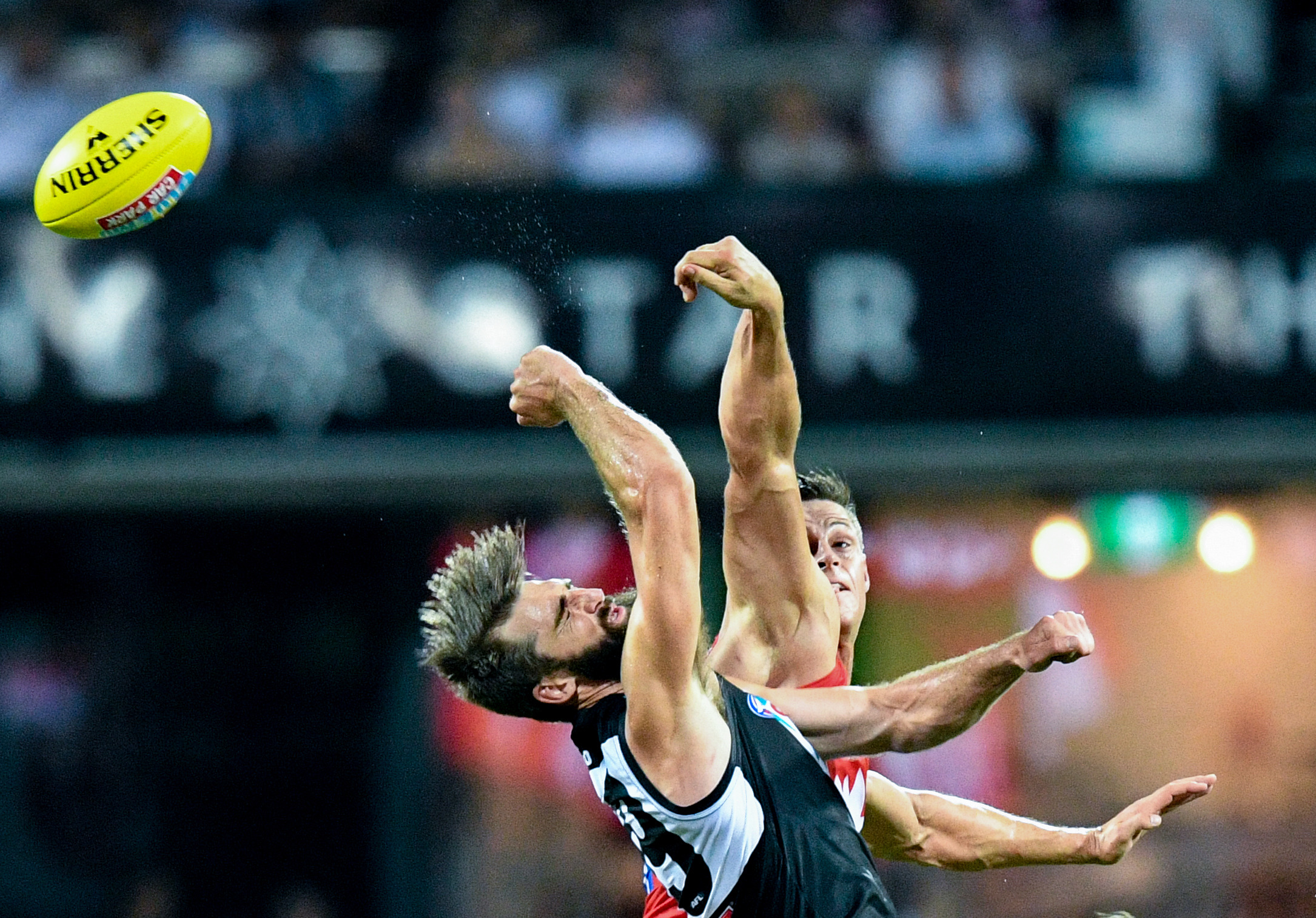 Port’s new “everyone gets a turn in the ruck” strategy continues to play dividends. Photo: Brendan Esposito / AAP

Sure, some might argue that it means the Power are officially ‘The Real Deal’ (or ‘The Teal Deal’ if you want to be cloyingly twee about the whole thing) but I think a much simpler explanation is that the mob from Collective Mind have possibly started working with the Swans in recent days and no doubt suggested that they deliberately drop a game or two to lull other teams into an early-season sense of security because it worked so well for them last year.

I think that is a much more cogent interpretation than that Port have both recruited and developed players exceptionally well and are playing an effective and exciting brand of football based on pressure, skill and flexibility that is thus far standing up against all teams and in all conditions.

Because that’s quite clearly not the case.

Still, it’ll be a long season if they’re going to play this kind of ‘anything you can do we can do better’ game every week. 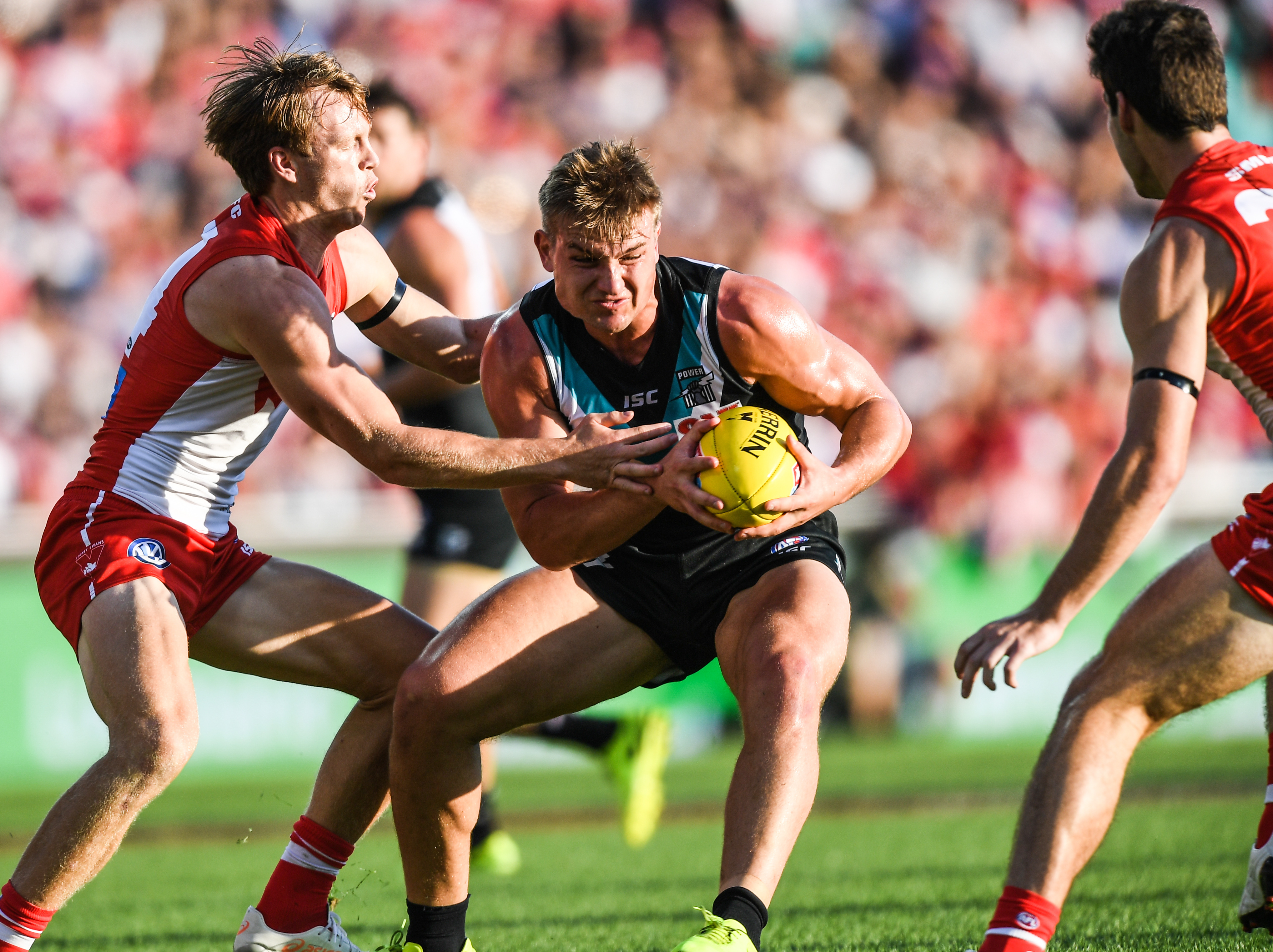 I’m still holding out hope that it was all an elaborate April Fools gag, and that they’ll be back to their far more endearing post-2014 mediocrity before we have to play them in Round 8 (which is, coincidentally, the next time the Tigers will need to leave the MCG).

Luckily, this week we are playing St Kilda – the team that obligingly provided an answer to the question: Is there anything worse than having to go through Good Friday without an AFL game?

At least, though, the weekend finished on a high: in a perfect football world we would just get to watch Geelong and Hawthorn play each other nine times a weekend for the duration of the season, and then give the flag to the Crows at the end.

Sadly, as we know all too well, it’s not that simple.

But at least we’ve remembered how to beat Richmond – better late than never, I guess. Which was lucky, because I reckon we’ve all heard their club song enough for one lifetime. Let’s never speak of it again.