Not that I’m paranoid, of course. Merely that it’s now clear the entire universe has conspired against the possibility of a Crows flag.

While I’ve always been an advocate for the pre-finals bye (particularly given our season so regularly ends with a trip to Perth) there is one obvious drawback – namely that we have to spend the best part of two weeks debating the merits or otherwise of the pre-finals bye.

But for Adelaide supporters this year, whatever else happens this finals campaign, the extended break is already unambiguously our friend. 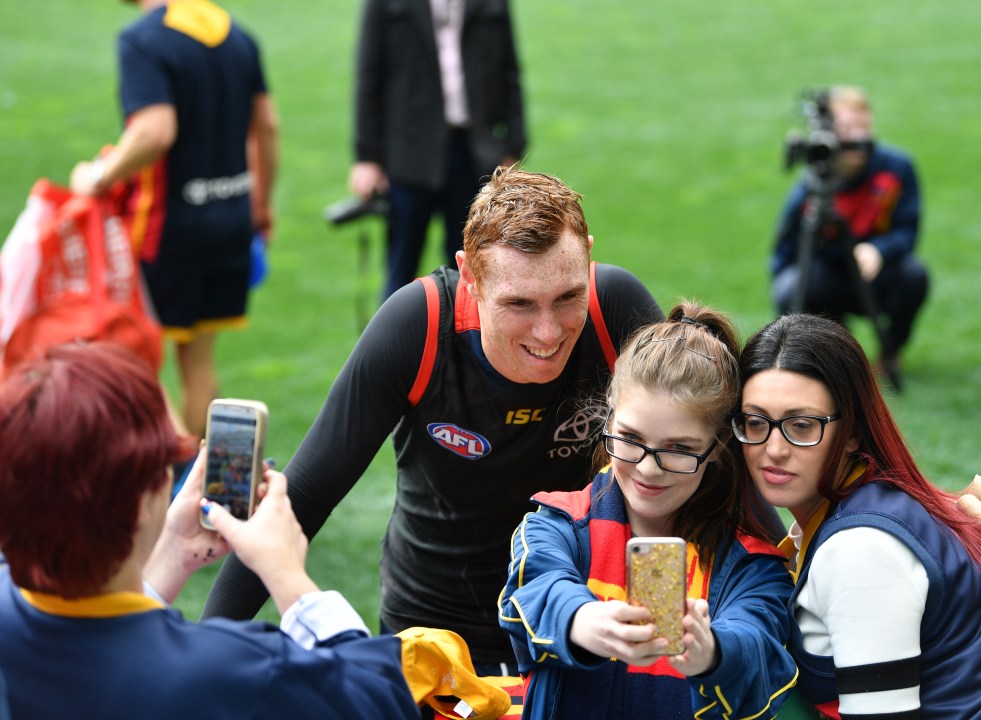 Even Crows supporters who probably don’t remember the team’s last flag are getting into the ‘finals selfie’ spirit. Photo: David Mariuz / AAP

For, on hearing the news about Rory Sloane on Tuesday last, the inner (and possibly outer) monologue of thousands of South Australians suddenly cried as one: “Thank f*** for the bye round!”

Either that, or they just lay on the floor in the foetal position, swearing and sobbing profusely.

Not that the extra week means he will play, of course. The guy was walking laps at training yesterday, which is not exactly a promising sign four days out from a top four finals clash. When he left hospital to chat to waiting reporters, his media minder shut down questions after literally a minute and a half. The dude wants to play a two hour-plus final, but apparently standing upright and talking for 90 seconds is pushing it?

But the extended break does at least let us cling onto some semblance of hope for a few days more. And, let’s face it, after almost 20 years, hope is in short supply.

Indeed, beyond the initial disbelief that one of our best players was having emergency appendix surgery – just four weeks after one of our best players had emergency appendix surgery – was a sort of resigned acceptance. Of course we were naïve to think winning the flag this year would come down to something so simple as playing well throughout the season, finishing on top of the ladder and then playing well again through September! How could we be so stupid?

Because after 19 years, the notion of the Crows winning a flag has taken on the air of a task so herculean, so unlikely, that it’s hard to conceive of it ever occurring again – even though logic dictates that it has to happen sometime.

It seems akin to all those failed attempts to kill off the Satanic offspring Damien in The Omen: sure, it’s a noble mission, but every time someone comes close the evil hand of fate throws a new and more bizarre impediment into their path.

I actually thought we’d never top Roo’s unlikely bout of Parvo virus in 2006, when the Crows’ charge to September suddenly went, quite literally, to canine faeces.

That was enough to make one suspect, deep down in places we don’t talk about at parties, that our team was actually, literally, cursed.

But another decade on, after only our fourth top two finish ever, and our most important player is hit with a sudden bout of appendicitis ahead of our first final?

I mean, after such a bizarre season I was always sure things would end with an explosive appendix, but this wasn’t exactly what I had in mind…

Needless to say, by halfway through Tuesday we were already reevaluating our plans for a weekend off during the semi-final round and things were looking decidedly grim.

Luckily, hope was around the corner in the shape of Mitch McGovern.

It was as though the club had taken us aside and said, “Look, I’ve got some good news and some bad news, and I’m gonna give you the bad news first…”

But the good news was so unambiguously good that we momentarily almost forgot that we were staring into the abyss of another wasted year.

Mitch had gone from McGoin’ to McStayin’, and long-suffering Crows supporters were unambiguously McLovin’ McGovern.

After a litany of player walkouts, it is actually a genuine pleasure to be able to dust off my Maxwell Smart impression and say: “Gee, Mitch… I hope I wasn’t outta line with that crack about the cake…”

Given we’re so obsessed with recalling 1997 of late, those with long memories may remember that in the days after Princess Diana died, the news came through that Mother Teresa of Calcutta had also passed away – which under the circumstances was awkwardly relegated to the back pages of the world’s newspapers.

Indeed, it could be argued that Port Adelaide themselves are the Mother Teresa of ‘SA-based teams making the finals’ right now.

If Mother Teresa wasn’t so fundamentally good and nice.

Still, for every action there’s an equal and opposite reaction, and thus McGovern’s decision also offered a pointed reminder that Jake ‘Leaver’ still appears likely to live up to his billing.

In case that’s too cryptic for you, allow me to clarify things in the style of the times: 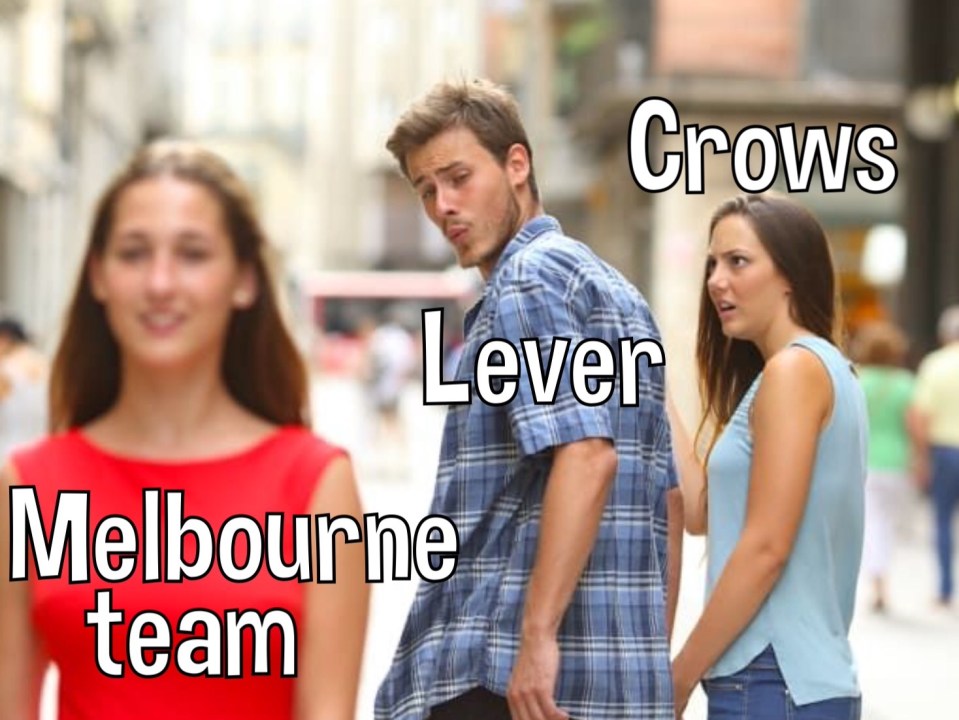 Just remember, Jake: you have one ‘get out of jail free’ card here. Namely, to take a game-saving mark like Leo Barry in the dying minutes of a Grand Final. Do that, and you can go anywhere you like with Fumbles’ blessing. Which is obviously among your chief considerations.

Still, we should probably look on the bright side here, counter-intuitive as it may be.

We may constantly lose our better players to other clubs, but at least we recruit them in the first place.

Unlike Collingwood, which goes out of its way to recruit players that neither it nor any other club wants or needs, sign them to long-term deals and then explain it away as “a bit of a mix-up”.

Yep, after former Freo forward Chris Mayne spent all but three games of the first season of his four-year deal with the Pies in the reserves, newly-re-signed coach Nathan Buckley helpfully gave him a confidence boost for the year ahead by explaining that “there were a few things mixed up” with his recruitment.

Even more bizarrely, this “mix-up” apparently occurred because of the crossover between Graeme Allan and Neil Balme as the club’s football director, with Buckley helpfully explaining that “the director of football was flipping around, and there were a few things that happened in there that weren’t ideal”.

If you’re confused about this, fear not. Here is the transcript from the meeting at which Mayne’s recruitment was rubber-stamped that explains all:

GRAME ALLAN: Hey Bucks, do you think we should recruit Chris Mayne from Freo?

NATHAN BUCKLEY: (With heavy sarcasm) Haha, yeah mate… we should offer him a four-year contract!

ALLAN: (Doesn’t get sarcasm) …Sure thing Bucks, I’m on it.

BUCKLEY: LOL, make sure you use up what’s left of our salary cap while you’re at it! And while you’re about it, ask around to see if there are any injury-prone midfielders over 30 we can sign up to help with our rebuild!

I can only assume that Bucks and Balme used to regularly joke with each other by saying the opposite of what they really meant, and that the coach foolishly continued the gag with his new football director, who failed to understand the attempted humour.

At any rate, Magpies supporters can look forward to many more years of Mayne, Wells and Bucks, so all’s well that ends well.

But while the off-season silliness has already started for the Magpies and their ilk, for eight other clubs Finals fever has been steadily building.

The Crows, of course, will face off against the Giants in a qualifying final, with the looming match-up prompting an explosion of excitement in Western Sydney when ticket booths opened on Tuesday: 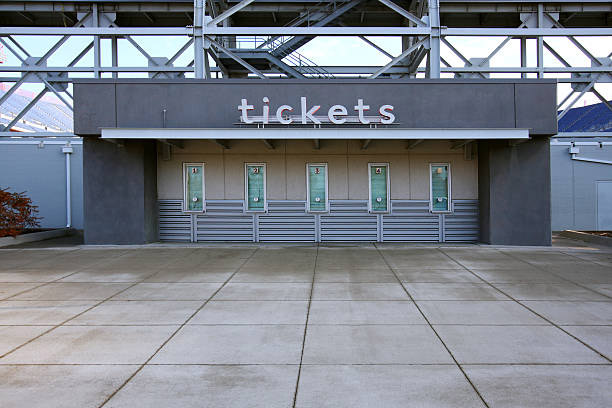 But in good news for GWS, after some nervous moments in the online queue their supporter managed to get a ticket for the game. So that’s a relief.

In the meantime, there’s plenty going on during the bye period to keep us all engaged. Such as the enthralling contest that was the AFLW State of Origin clash, which obviously really pumped up our parochial confidence heading into the finals. And, of course, the announcement of the All Australian team, which is always a welcome event in the footballing calendar, given the dearth of awards and acknowledgments in the AFL these days.

I mean, besides the Brownlow, the Players’ Association MVP Award, the Coaches’ Association Award, the Rising Star Award, the respective clubs’ best and fairest awards, a host of individual achievement awards and a glut of media outlets’ own annual accolades, AFL players really don’t get the recognition they deserve for all their efforts. Oh, besides their meagre pay packets, of course.

But the really great thing about the announcement of the All Australian team is that we no longer have to hear any player in a consistent patch of form described as being “definitely in All Australian calculations this year”.

Apparently this is the highest compliment a commentator can bestow on any given player: to be “in the All Australian conversation”.

Eg: “I know it’s only round two, but if the All Australian team were named right now, I reckon this guy would be thereabouts, don’t you Duck?”

“He’s definitely in the conversation, Bruce.” 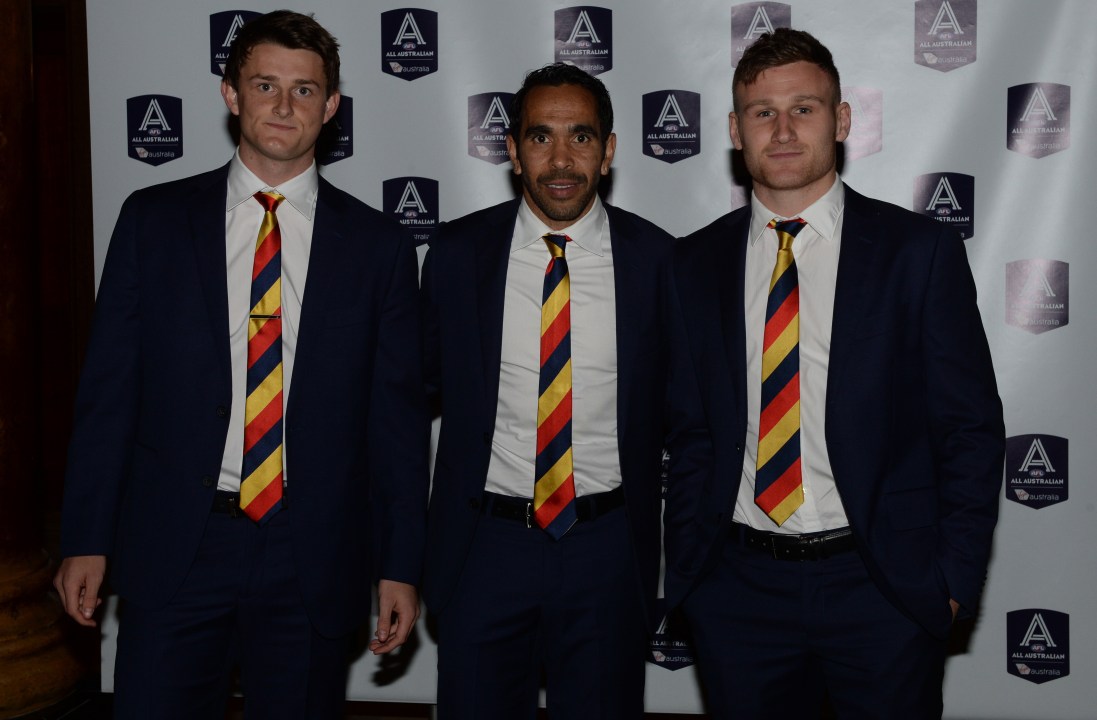 Anyway, the occasion certainly seems to tick off on the full gamut of footy’s emotional clichés – which means encompassing everything from “stiff” to“rapt”.

But as one Adelaide supporter succinctly pointed out at the time, for Crows devotees the evening raised only one fairly pertinent question:

Of course, as it turned out incredibly sadly, beating Paddy Ryder to the All Australian ruck position was the last thing on Sam Jacobs’ mind on Wednesday night.

We won’t dwell on what he’s going through, other than to offer condolences and strength to him and his family, and to note that for the rest of us this might serve to remind that we never truly know what is going on in the lives of these players when we so casually reflect on their form and fitness.

Jacobs will reportedly take his place in the side this week, but it’s fair to consider that he’ll be playing for a cause bigger than breaking a premiership drought, and drawing from deeper emotional reserves than 19 years of barren frustration. 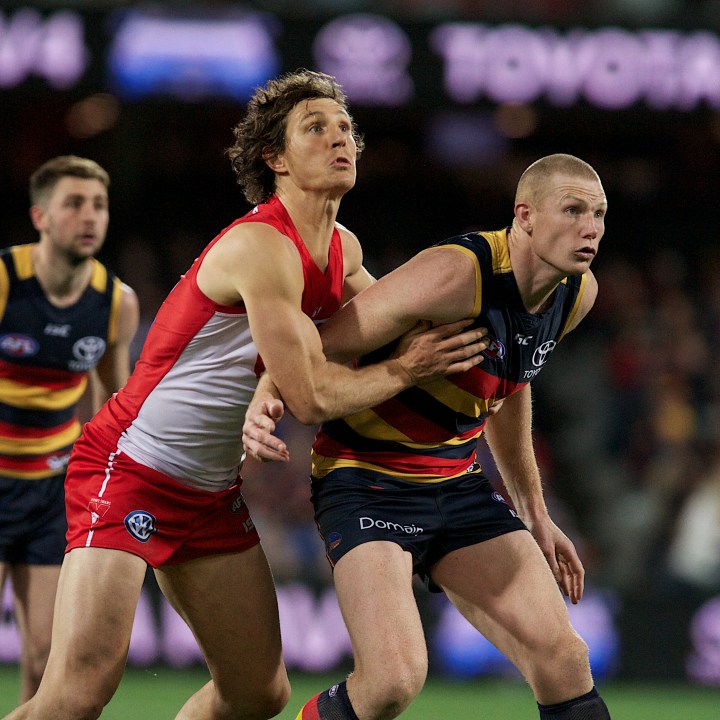 There are times that the travails of the team you support can seem all-important. Particularly when they haven’t won a flag since an era when you spent most of your days kicking around university bars, and you now divide your time between filing copy for deadline and shuttling kids to and from school and childcare.

But every now and again life reminds you that the things you think are so very important are probably not quite so important in the grand scheme of things.

Touch of the Fumbles is InDaily’s weekly Monday AFL column. Yes, it’s shamelessly biased. Even up the score in the comments section below.