A brief synopsis of the Adelaide Crows in Season 2017.

When they are good they are very, very good.

But when they are bad, they are horrid.

That is the story of the season thus far, and we were privileged to see both sides of their split personality emerge in quick succession within a single – and singularly remarkable – game at the MCG yesterday.

Sure, there is a part of me that wants to tee off like Terry Wallace in his heyday about how bad Adelaide were in that first half, and that having been gob-shitingly terrible they still somehow came out after half-time and let Collingwood kick the first two goals of the third term to push the margin out to an even 50.

To paraphrase the former Bulldogs mentor: “We were a rabble in that first half – absolutely bloody disgraceful.”

A succession of dropped marks (I’m not going to name names, but it was Josh Jenkins and Tom Lynch) cost us almost certain goals, with Collingwood repeatedly clearing the ball to create their own six-pointers at the other end.

It was as if the Crows had collectively decided to make a concerted effort to help Nathan Buckley keep his job. Playing the long game, perhaps.

This was always a danger match, of course – nominally the easiest of our five remaining minor round games, but Collingwood had been up and about in recent weeks, and had much to prove after their CEO Gary Pert quit, possibly to pursue his dream of starting his own self-named anti-dandruff shampoo company.

But it was not like this was a full-strength Collingwood either. Jordan De Goey, the matchwinner last week, was relatively quiet, which is probably somehow the fault of his dog.

And all the while their injured skipper Scott Pendlebury sat watching from the coaches box with a giant cast on his middle digit that made it look like he was giving us a none-too-subtle gesture to go fornicate ourselves.

Which we were managing quite successfully in any case.

But as bad as the first half was, the second was mesmerisingly good. Happily, Jenkins, McGovern et al apparently swapped jumpers with their identical-but-much-more-talented twins during the long break and consequently started playing significantly better.

The Crows ran, and spread, and handballed, and ran some more. It was majestic.

Apart from the fact we were 50 points down. 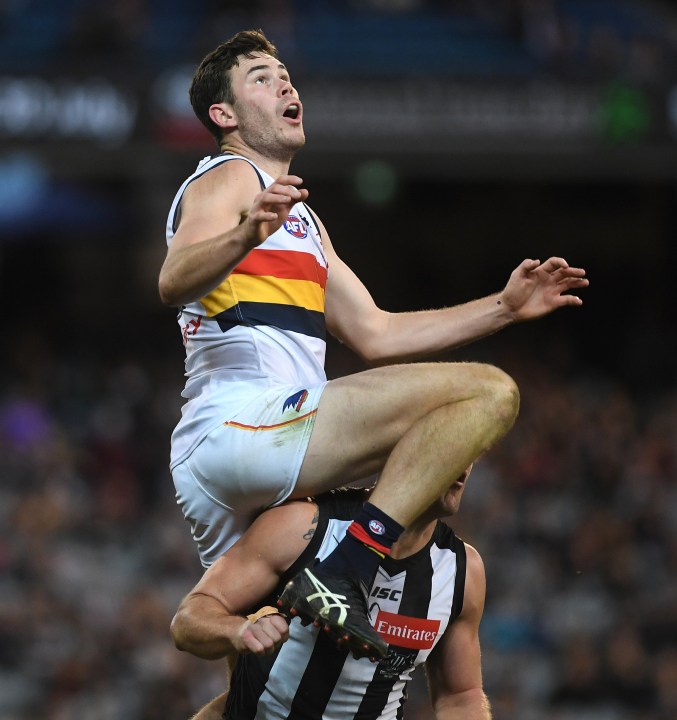 But the margin swiftly whittled down, as did my nerves, and fingernails.

Significantly, too, we emerged with no new injury concerns. Well, apart from Kyle Hartigan, who pulled his dodgy hammy in the twos yesterday. And the fact I might have broken my thumb thumping the coffee table after McGovern’s post-siren goal.

It was, however, not the traditional ‘frustrated coffee table punch’-related injury, but the far sweeter ‘jubilant coffee table punch’. Sure, to drop two points to a non-finalist is rank stupidity. But then, if you’d have told me two minutes into the third quarter that we would salvage a draw with a kick after the siren, I’d have laughed out loud. And then possibly slapped you.

It was important though.

It was important because of the cadence of our season. Because when we are good we are very, very good, but when we’re bad, we’re horrid.

Our four losses to date weren’t momentary lapses, nor hard-fought, last-gasp ‘what-if?’ kinda defeats. In each, we were outplayed, outmanoeuvred, outgunned, outmuscled and just generally out of the contest.

So this was a sign, at least, that Adelaide can adjust its mindset, and its game, and fight it out till the final siren and then some.

It also, incidentally, doesn’t render our lofty percentage entirely useless. Indeed, that heretofore annoying Round 15 Geelong draw with GWS has ensured that both the top two sides have that awkward two-point increment on the chasing pack – but it also means we are a win and percentage ahead of the Cats.

Who may yet be without everyone’s favourite turncoat Paddy Dangerfield, after he executed what everyone seems to agree was the perfect tackle on Saturday apart from the fact that it left one of the biggest men on the ground concussed.

Football pundits quickly sought out the objective thoughts of Dangerfield’s coach who, surprisingly, didn’t think there was much in it.

“I would expect that would be fine,” enthused Chris Scott.

Which he didn’t, actually.

But speaking with my figurative Adelaide Crows scarf on, they should probably rub Dangerfield out anyway just for being a smug, selfish traitor. I’m sure there’s something in the AFL rules about that sort of thing? 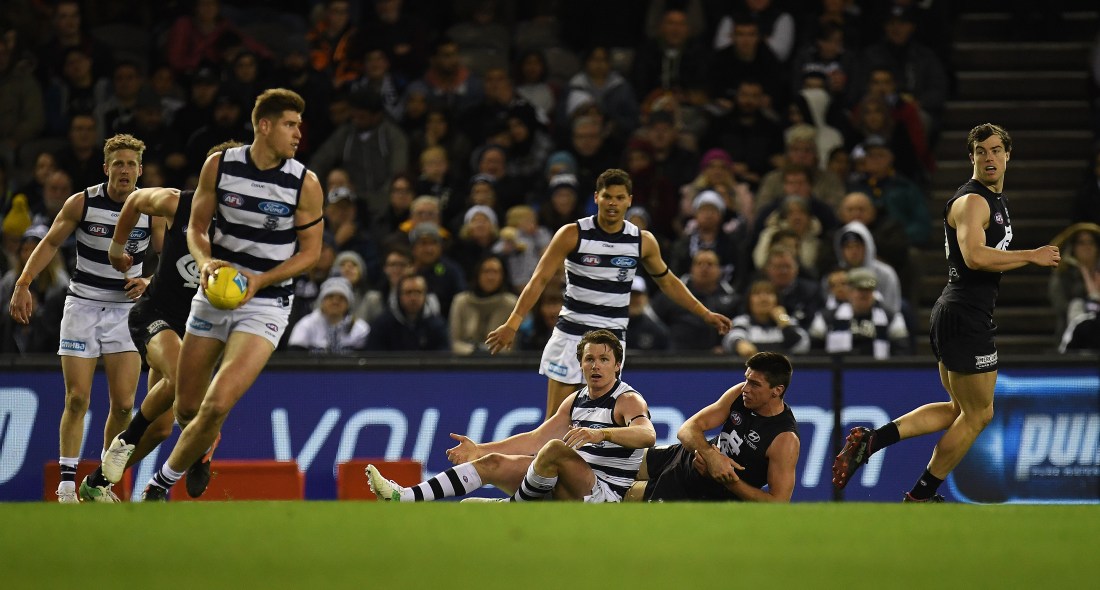 But the other main reason we needed to salvage something out of our risible first half yesterday was the perpetual one: Port Adelaide.

It was all looking so good for a moment there. Down by 10 points against a mid-table St Kilda outfit at home with less than two minutes on the clock. 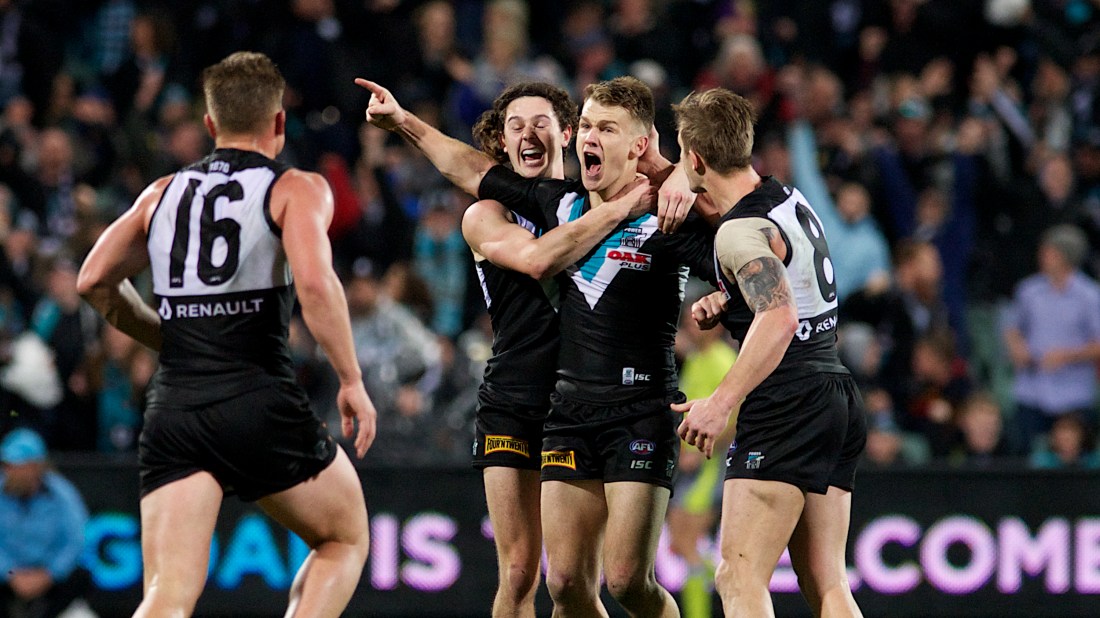 And then this. Photo: Michael Errey / InDaily

But here’s the awkward thing.

I’m gonna have to put my hand up for this one: the Power’s last-gasp comeback was actually my fault.

As the clock wound down, I allowed myself a self-congratulatory tweet about their impending demise.

My one caveat to this otherwise splendid event is: does this make Port more or less likely to win next week? #AFLPowerSaints

At which point they kicked two goals in a minute to seal the unlikeliest of victories and send Ken Hinkley into his best Basil Fawlty impression. 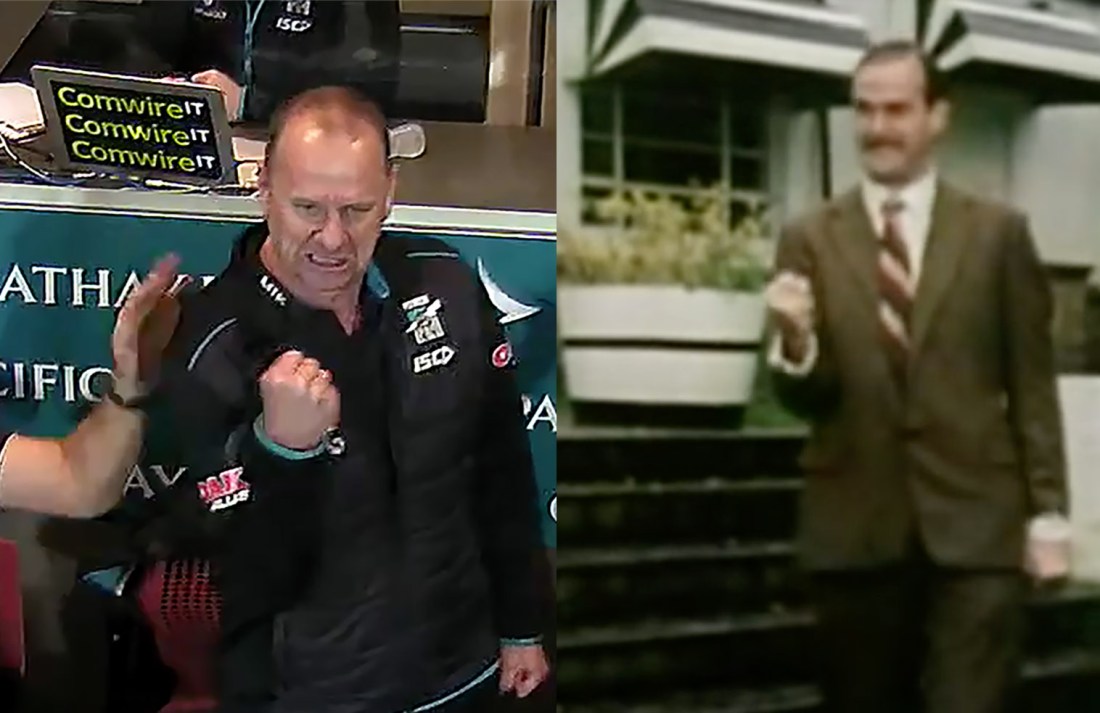 But I console myself that if I didn’t see that finale coming, neither did most of the Power supporters. 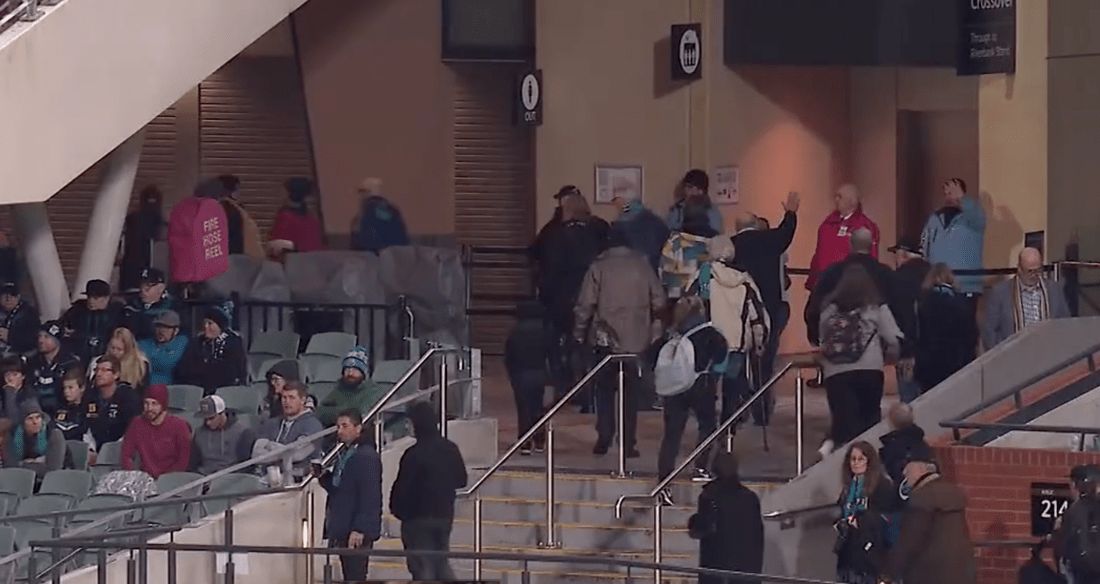 ‘So long, farewell, auf wiedersehen, goodbye…’ Port fans have seen enough – or have they? Photo via Fox Footy

A crowd of 30,335 saw one of Port’s more turgid efforts for the season. And best I could tell, about five of them hung around to catch Robbie Gray kicking the matchwinner from a perfect tap by Paddy Ryder.

Unfortunately, it was also eerily redolent of one of my least favourite football memories.

Which means it was the second time this year I’ve had to be reminded of the exploits of Andrew Leoncelli, which made Port’s two-point win even more traumatic.

An evening of bucketing rain had made deft footwork hard going but, like Andie McDowell in Four Weddings, Gray managed to conjure a memorable finale despite the downpour.

And at least all those Port supporters who had already vacated Adelaide Oval in disgust would have been consoled by jagging the first seats on the Footy Express. Which would have been the perfect vantage point to watch all their much happier fellow supporters getting on the same bus five minutes later. 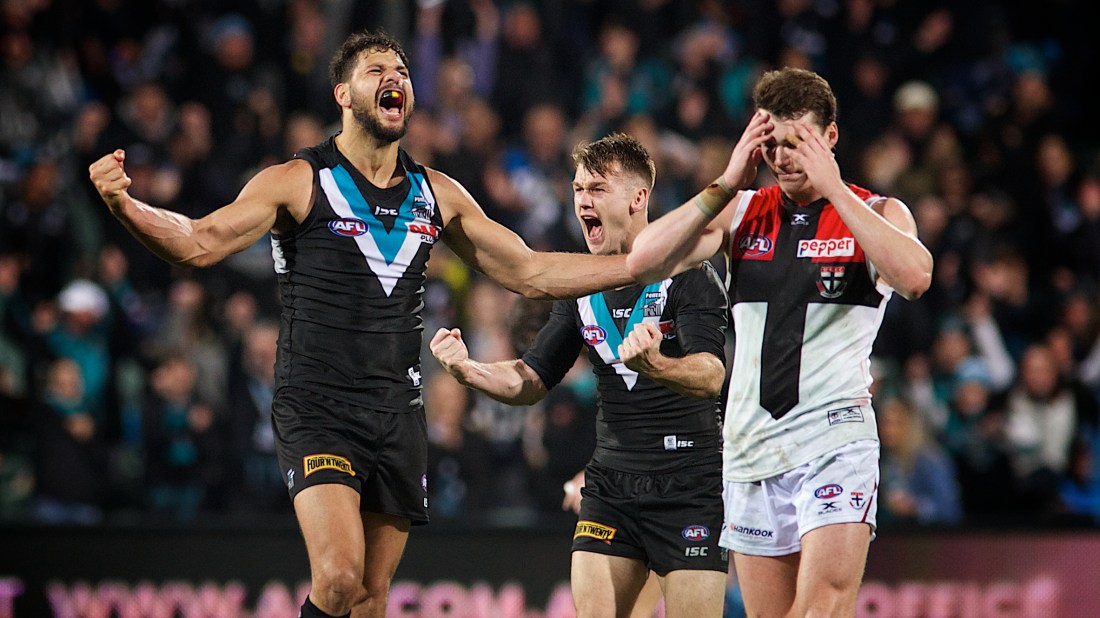 The two matchwinners celebrate while, below, the Saints ruminate. Photos: Michael Errey / InDaily 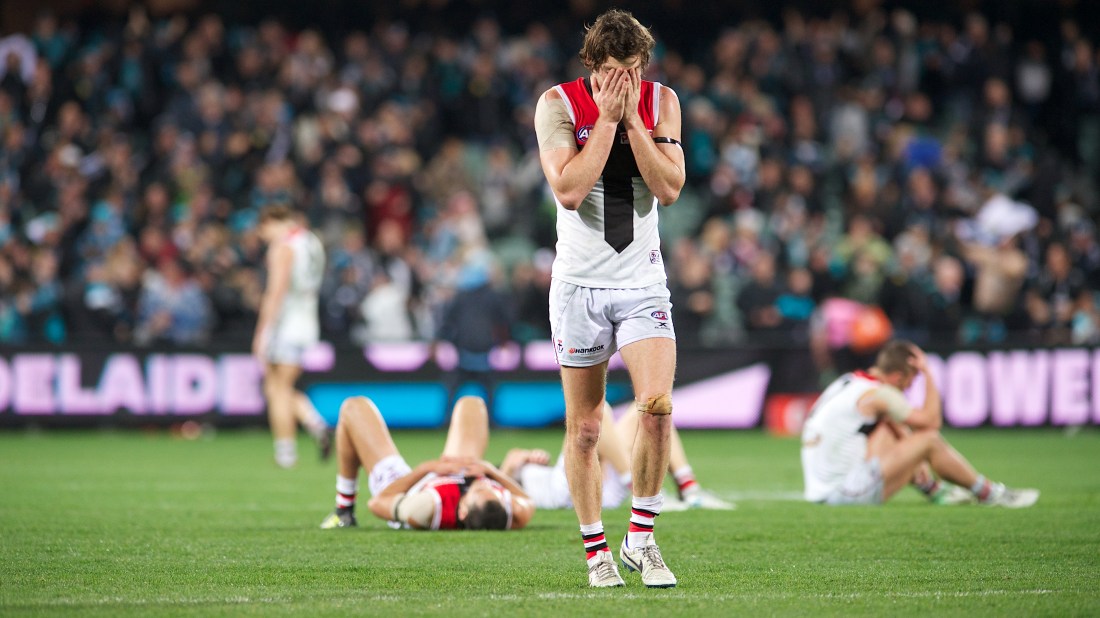 So the question still stands: does Port’s win make it more or less likely that they will come to play for the Showdown this weekend?

And moreover, will our comeback give us renewed confidence or merely entrench our evident complacency?

We will, at least, likely get Crouch, Lever and Betts back for the big game. Which is handy, since we have never managed to win a game when Betts has been out injured.

Of course, we’ve never managed to lose a game when he’s been out injured either…

But on balance, perhaps the draw was a handy wake-up call.

After all, it did unearth a useful new strategy for the remaining four games – go in pretending we’re already down by 50 points.

Besides which, I’ve never been overly comfortable with the notion that my team are overwhelming flag favourites.

Indeed, this whole season has felt like we’re St Kilda playing Port, and up by 10 points with two minutes left on the clock.

When things are good, they’re very, very good. And sure, it’s tempting at those times to go the early crow.

But you’re only ever seconds away from the inevitable collapse.

Because when we’re bad, we’re horrid.