AN OPEN LETTER TO THE CARLTON FOOTBALL CLUB

Just a little note to say thanks.

You’ve always looked out for us, and I appreciate it.

You really are, as you keep insisting, the team that never lets us down.

After all, you gave us Sauce Jacobs, Eddie Betts… um, Troy Menzel.

And sure, there was that business in the off-season with Bryce Gibbs, when you failed to accede to our very reasonable request that you hand over a top-line midfielder so that we could win a premiership.

That was a tad selfish of you, I thought. 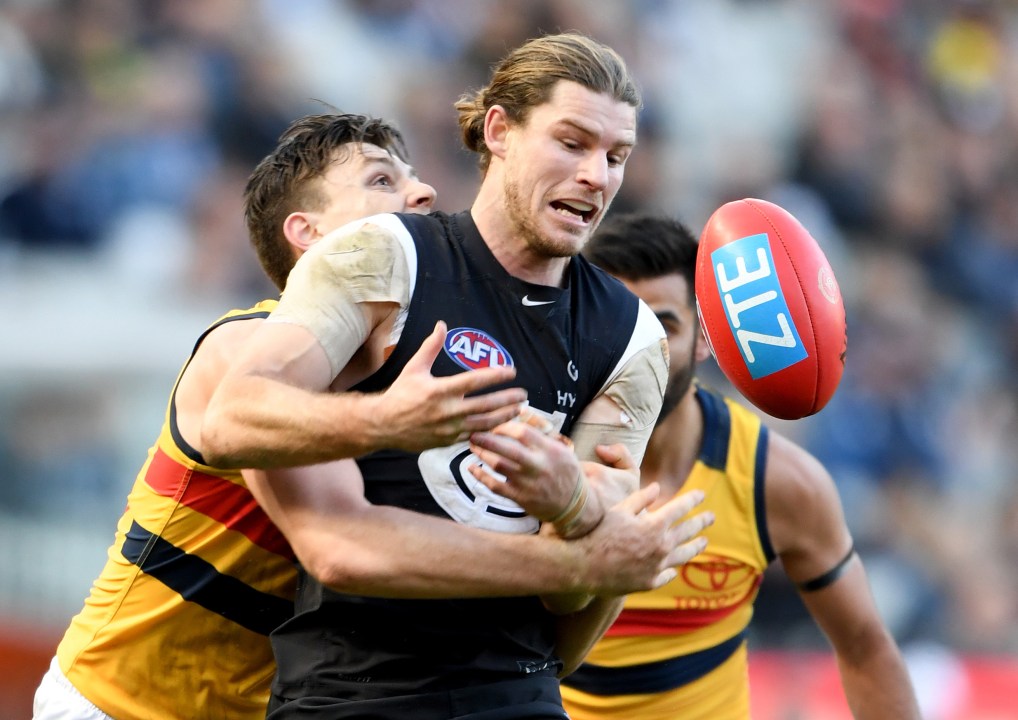 But y’know what? I get it now.

I realise that you needed Bryce Gibbs to stay so that you could beat GWS by a point in Round 12, to magnanimously hand us back top spot on the ladder.

Unfortunately, we stupidly lost to Hawthorn and consequently didn’t stay there very long, but we appreciate the gesture nonetheless.

But it does make me realise that even when it looks like you’re being cruel, it’s really only to be kind.

Like that time Fev kicked the winning goal to break our hearts back in 2004. Sure, it seemed like a bad thing at the time. A very bad thing.

But, on reflection, it helped us move along Gary Ayres more quickly, and consequently helped us win the minor premiership the following year. (We didn’t do so well in the finals, but we can’t blame you for that since you were nowhere near the major round that year, instead finishing with the wooden spoon, as you are wont to do this millennium.)

But you can’t say all your generosity hasn’t been reciprocated.

How about the time we delisted Matt Wright for a bit of a laugh, so that you could pick him up for nothing and he could go on to be your leading goalkicker (appreciating that there was not a lot of competition as you are a bit light on for goalkickers, and also goals).

And what about Sam Kerridge? Sure, he was once instrumental in one of our best home and away wins of all time, and was about the only player on our list who seemed capable of shutting down an opposition midfielder, but we were happy to hand him over to you so he could do a number on Rory Sloane on the weekend while also gathering 27 very handy possessions himself (well, one of them was out on the full in the forward pocket, so that was more handy for us than you.)

Having taught him how to tag an opponent, it was kind of apt that he would one day use those powers against us.

I actually heard some audio of an exchange between Sloaney and Kerridge that was caught on the umpire’s mic:

KERRIDGE: “When I left you I was but a learner – now I am the master!”

SLOANE: “You can’t win, Kedge – if you strike me down, I will become more powerful than you could possibly imagine…”

After which Kerridge proceeded to strike him down, although unfortunately Rory didn’t become more powerful than I could possibly imagine, so I guess he must have speaking metaphorically.

And did you like that long-bombed goal by Kerridge from the centre square that almost cost us the game? Yep. Generous. 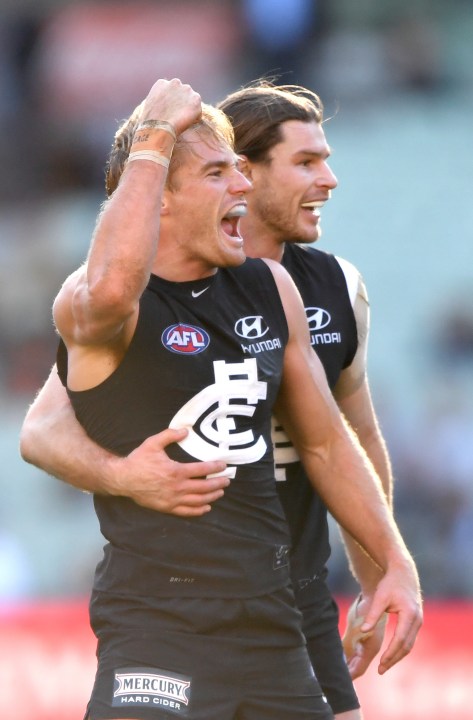 Kedge and Gibbsy both looking very disappointed about not playing for Adelaide. Photo: Joe Castro / AAP

Still, any despondency about trading away The Kedge was alleviated when we discovered that Menzel managed a goal among his seven touches for the Crows reserves in their 52-point loss to Sturt on Saturday.

You see, Carlton, we are just such a talent-laden outfit here at Adelaide that we can afford to just hand off decent players to struggling sides, no questions asked, for no greater benefit to us than to sort-of bolster our SANFL side.

We like to think of it as a kind of charity.

They’re loving the fact we gave them Jarryd Lyons for a handful of magic beans, particularly with his 39 touches, 23 contested possessions and 10 clearances in Saturday’s twilight game.

‘Hang on… aren’t the Crows lacking a bit of midfield depth themselves’, you may ask?

But, you see, that’s just how we roll here at Adelaide.

Some clubs see things as they are and say: ‘Why?’ We dream things that never were and say: ‘F*ck it, let’s trade a few midfielders’.

Or if we don’t trade ‘em, we play an even better gag: we re-contract them for a year – and then refuse to give them a game.

No matter how good their form is! Hilarious, don’t ya think?

Still, our Crouch-led midfield actually acquitted itself very well in Saturday’s game, so we can’t complain too loudly.

And it was, after all, a “finals-style game”, as Don Pyke called it afterwards. Albeit against a non-finals-bound team (no offence, Carlton).

Interestingly, Pyke also noted that we got the win even though the game wasn’t played on our terms, which sounds very much like a concession that ours is not a finals-style gameplan. But no matter. 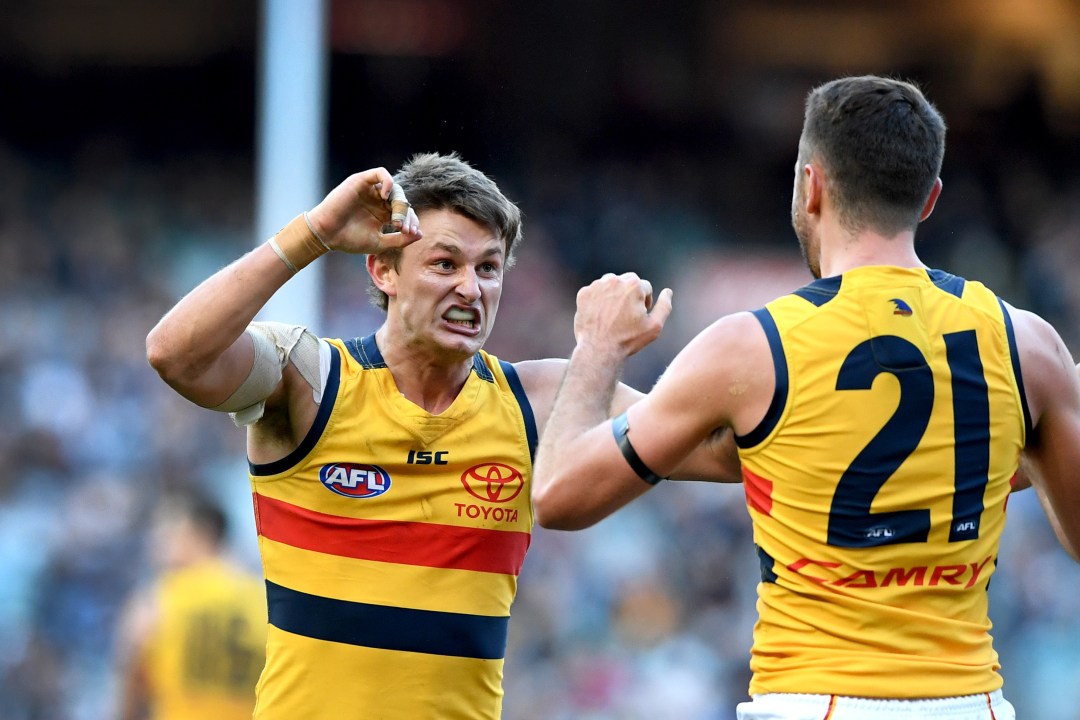 Matt Crouch gets his game face on after kicking a crucial goal to go with his 11 final-quarter disposals. Photo: Joe Castro / AAP

Because if nothing else, Port lost at home this week, which means their perpetual quest to beat a top eight side meanders on.

This was a big win for Richmond, particularly given the circus surrounding the suspension of defender Bachar Houli for striking during the week. 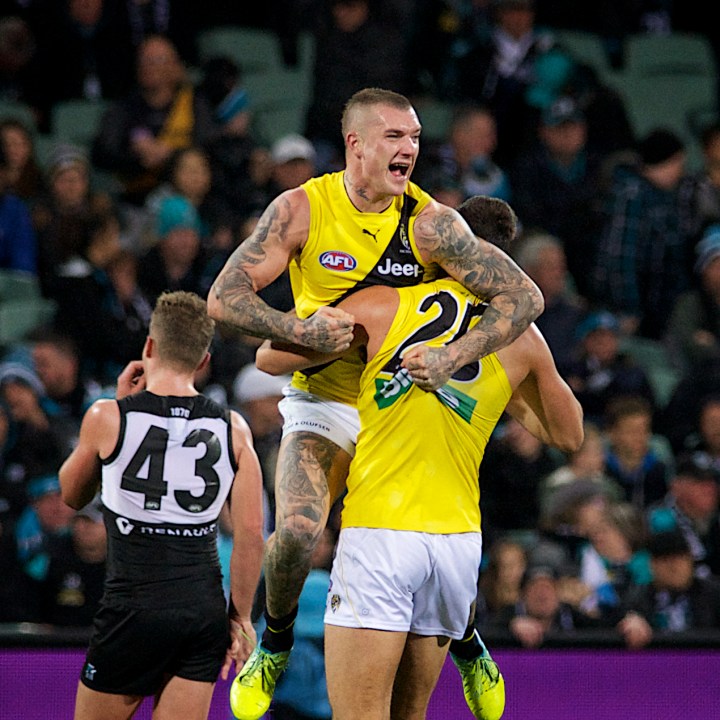 Two years ago, Dustin Martin pledged to get a new tattoo every week until Port beat a side in the top eight. Photo: Michael Errey / InDaily

You won’t have noticed this, because no-one pointed it out, but if you say it out loud ‘Bachar’ actually sounds a bit like “Basher”, so maybe a newspaper headliner-writer or some wag on Twitter should think about using that one if it ever happens again.

He originally got away with a two-week suspension after the Tigers’ legal boffins bamboozled the tribunal with the ‘Chewbacca defence’.

Houli was also helped by a glowing endorsement from Malcolm Turnbull. Although the PM also said last week that he had an “outstanding ministry, a great team and we’re delivering great results for the Australian people”, so the tribunal should probably have taken his character assessment with a grain of salt. 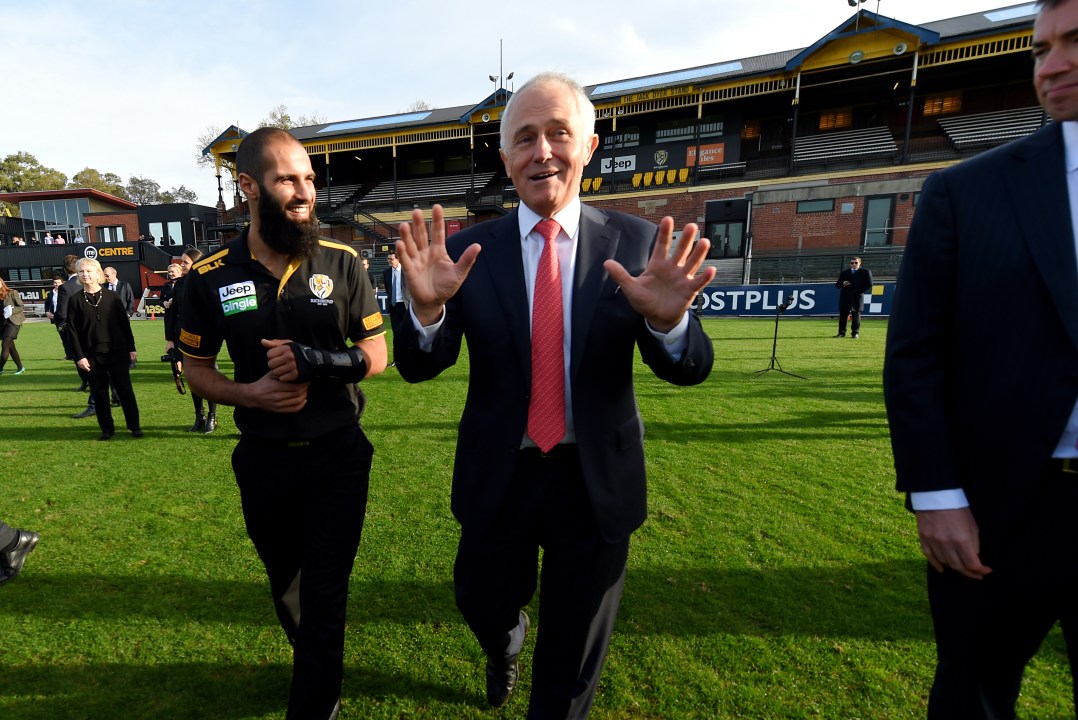 “So is this how they signal a goal?” “No, not exactly, Prime Minister…” Photo: Tracey Nearmy / AAP

Anyway, at the end of the day everyone agreed that we had to clamp down on the culture of casual violence in football, and therefore that Houli should “get his whack”.

No doubt Melbourne’s lawyers will be looking to cite precedent when serial pest Tommy Bugg goes before the panel tomorrow for his crude punch on young Sydney star Callum Mills. I heard they’re hoping to produce a glowing reference from Donald Trump, calling Bugg a “great modern day ambassador for the sport” and hailing his inspired use of social media.

Anyway, while it’s always fun to watch Port piss four points up the wall on their home deck, I was somewhat distracted by the concurrent game between GWS and Geelong.

It was always a problematic outcome for the Crows: either the Giants would go clear on top of the ladder, or Geelong would be only one win away from usurping us in second spot. Unfortunately, both of these things happened.

The last-gasp draw, with Tom Hawkins missing a set shot after the siren (after a modest 45-possession game from some fellow named Patrick Dangerfield) essentially means that our one advantage this season – an astronomical percentage – is now effectively erased. If we finish on the same number of wins as either (or both) GWS or Geelong, we fall behind them.

This might have been the draw that broke the camel’s back. 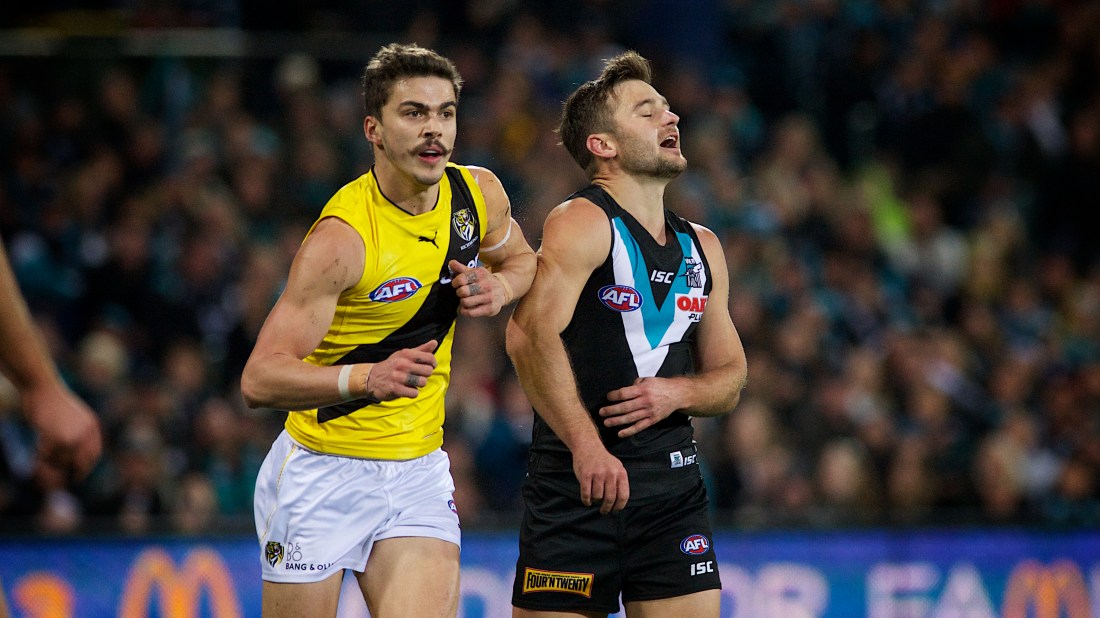 You know you’re having a bad night in front of the big sticks when someone sporting a handlebar moustache can make a gag at your expense. Photo: Michael Errey / InDaily

To be fair though, it would have been a tad embarrassing to find ourselves on top of the ladder on the back of Saturday’s scrappy win and our recent run of form.

One hopes that run is now at an end, given our run home sees five likely finalists and three prospective ones standing between us and September: the Bulldogs, Melbourne, Geelong, Collingwood, Port, Essendon, Sydney and West Coast (away).

And that really could be the draw that breaks the camel’s back.

So with all that ahead of us, we really needed to escape with a win on Saturday at the MCG.

And though we tried our best to throw it away, you let us somehow run away with it in the end.

I always knew you were in our corner.

After all, you did give us Eddie. And Sauce.

And best of all, you did us the ultimate favour and took David Gallagher off our hands back in 2001.

So this is just an overly-long-winded way of saying, sincerely: thanks.

Look after Bryce for us; we might still be needing him at some point. And I’m sure we’ll be able to offer a suitable trade this time… we have this guy called Troy running around in our reserves you might be interested in?

PS: Say hi to Triggy for us.