I’m not a convert, because I never needed to be convinced.

And mostly, of course, that it wasn’t just any old football, but a new incarnation steeped in symbolism and promise – if nothing else, the promise of a genuine AFL competition to showcase through the summer lull, as opposed to merely another preseason Clayton’s campaign.

But moreover, that my team played, and won, and won well. 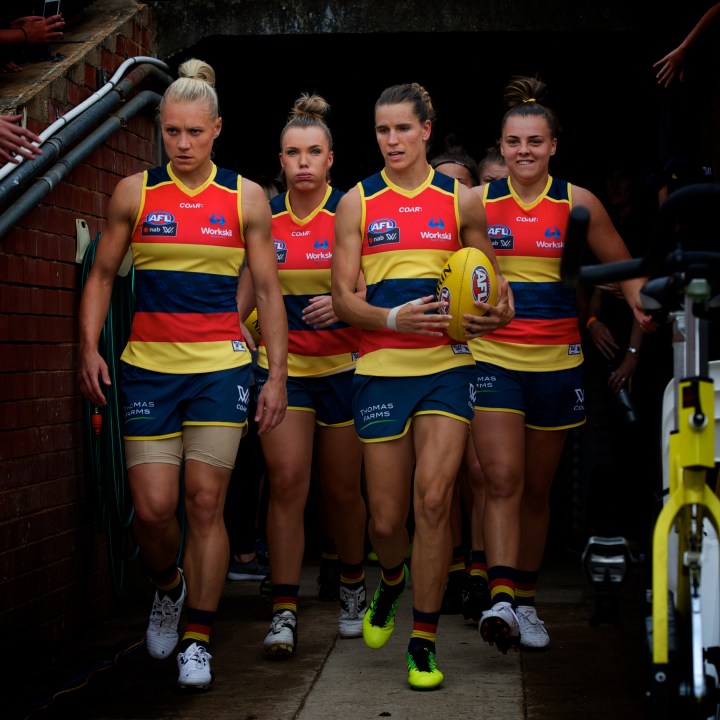 And, let’s face it, it’s been almost 26 years since the Crows last won a game in their first match in a new league, so that’s kinda cool too.

And there were eerie shades of 1991, not least because the lop-sided margin favouring the home side immediately raised the hopes of the most-faithful-of-the-faithful for a debut-season premiership. And sure enough, the eventual premier did play that night in ’91 – but it wasn’t us. Which might be a good omen for GWS come September (though probably not March).

And in truth, beating the Giants’ AFLW team is not much to crow about (no pun intended; nor delivered, really), although it’s certainly better than not beating them. 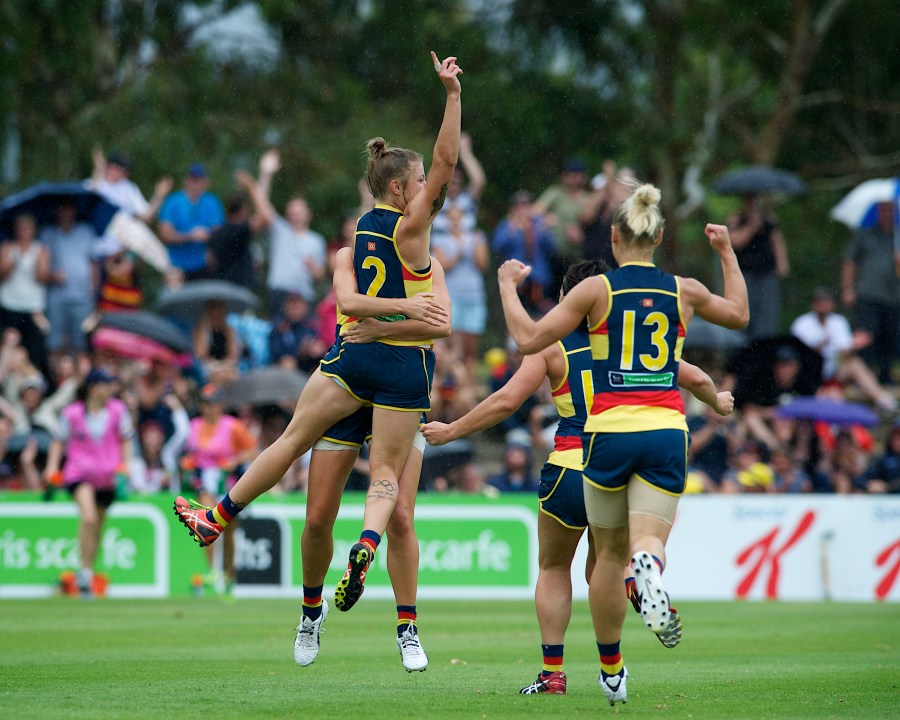 GWS were without marquee players Emma Swanson and Renee Forth (the latter to miss the entire season), as well as priority signing Louise Stephenson. Which is arguably a bit like Geelong playing without Paddy Dangerfield, Joel Selwood and Tom Hawkins – if all their other players happened to be semi-professional footballers with day jobs and a combined games tally of zero.

Which means it could be a long seven weeks for the luckless Giants women’s team, whose coach Tim Schmidt is likely to be uttering a certain word that rhymes with his surname numerous times throughout the season. 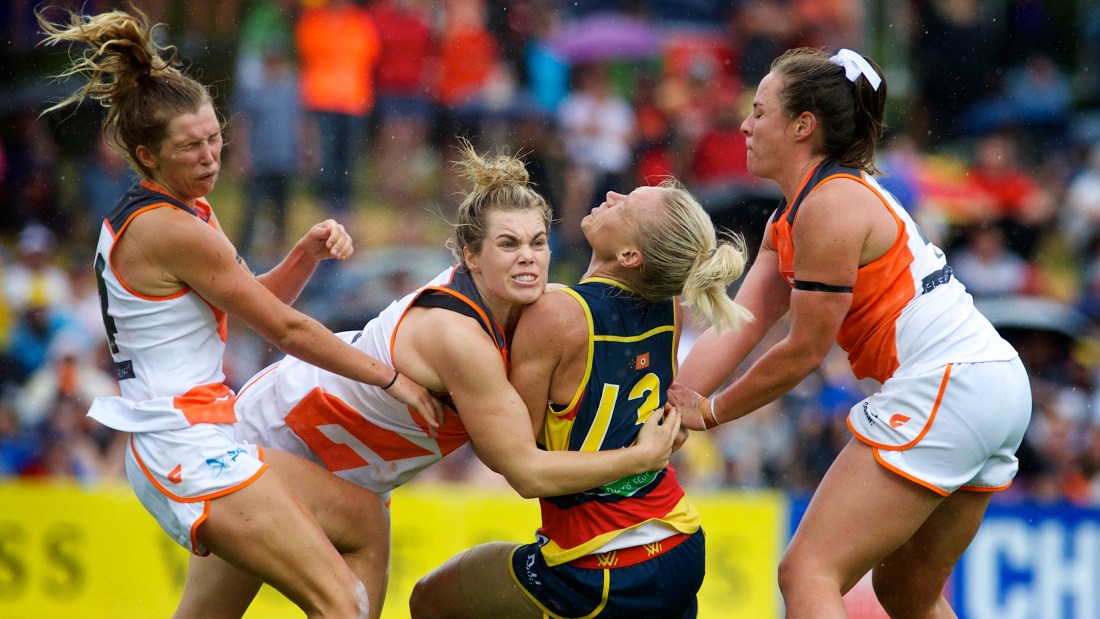 But here’s the rub. There have been a few – quite a few, sadly – snooty comments about the standard of play on message boards and online comment threads, all of them fixated on an inherent gulf between the men’s game and the women’s. Yes, they are different games; but the skill levels displayed were more a reflection of the fact these players were plucked from careers and busy lives, paid a pittance and given mere months to reach a competitive benchmark. A reflection of the fact that grassroots football programs have traditionally focussed on boys rather than girls and yet, despite all the impediments these teams came out and played tough, contested, sometimes dazzling and always compelling football.

This wasn’t the apex of women’s AFL. It was the start. And a bloody good one at that. 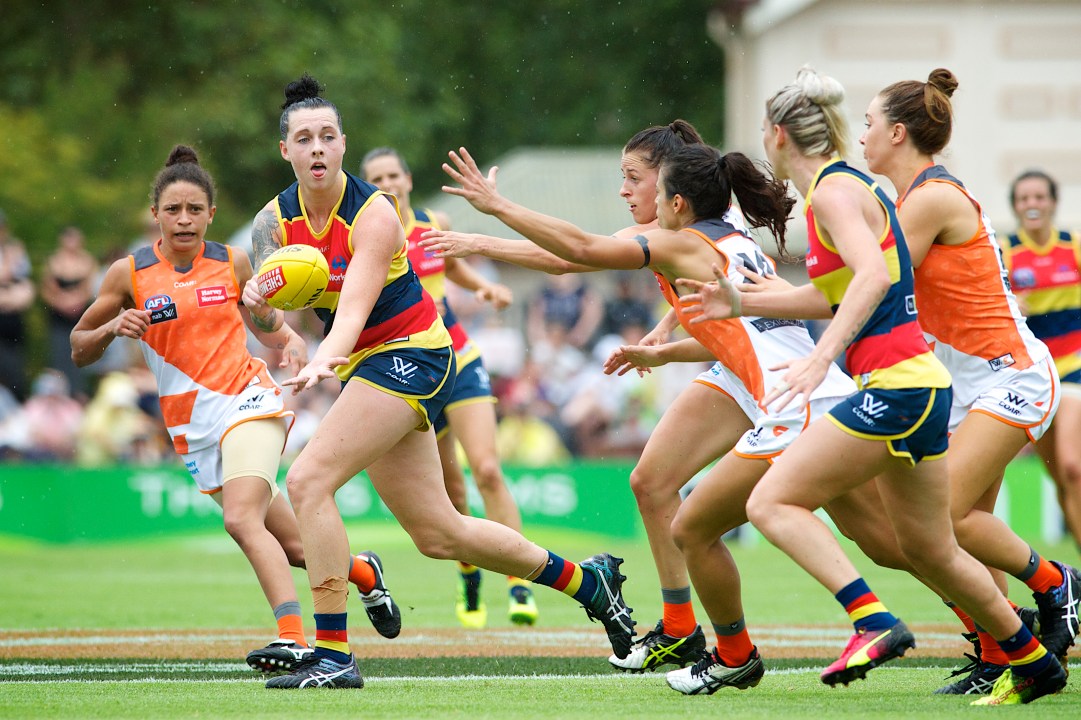 Aptly enough, too, there was little of the usual machismo so familiar to the men’s game – the odd gratuitous shirtfront or hip-and-shoulder, perhaps, but in general the tiresome faux-heroics were set aside. One suspects that even with the absence of fines (given the players’ parsimonious remuneration) there will be few fracas-related penalties doled out in the AFLW.

Melees are not really a women’s thing. In my experience, they prefer a more subtle form of psychological degradation, discreetly doled out over several years – and I’m not sure the tribunal is configured to deal with that.

There are, of course, a few rough edges this new league needs to iron out. The strange stipulation that every losing side is only allowed to score one goal is an obvious place to start.

I genuinely don’t want to be condescending here, because I’m confident that any of these women could beat the crap out of me

In the opening match, Collingwood scored their allotted goal in the opening minutes, and thus weren’t permitted to do very much else for the remaining three and three-quarter quarters.

Which was quite apt, as in one game the women’s team managed to effectively sum up the past five years of Magpies history – starting in a blaze of glory before swiftly going down in flames.

Their conquerors were the old nemesis Carlton (if one can be permitted to have an old nemesis in a competition in which no previous games have been played), which meant Blues fans got to enjoy the rare experience of celebrating a win, or at least one that wasn’t at Port Adelaide’s expense.

The Demons’ loss to Brisbane was played in front of 6500-odd fans, which is possibly a new attendance record for both clubs

For impartial viewers, the league’s first hit-out was pitted against the Adelaide Oval boxing extravaganza on Friday night, which meant you had the choice between watching a hard, tough, desperate sporting contest – or boxing.

Two old blokes pounding one another in the face for big money, preceded by a rugby player belting the crap out of what appeared to be the little fat kid from Hey Dad.

Surely a choice between watching that and watching the first match of a league that promises a generation of young girls that they can aspire to the heights of their favourite winter sport is a no-brainer, right? At least, unless you’re Eddie McGuire?

But still, the crowds came – and they stayed.

The Demons’ loss to Brisbane was played in front of 6500-odd fans, which is possibly a new attendance record for both clubs.

It might have been more had it not been played in a tempest, which prompted the match to be called off in the second half (either that, or it was just a conspiracy to make sure the losing team maintained its one-goal tolerance.)

But there is still something about the AFLW I’m uncomfortable with – though not in a weird, Graham Cornes kinda way. 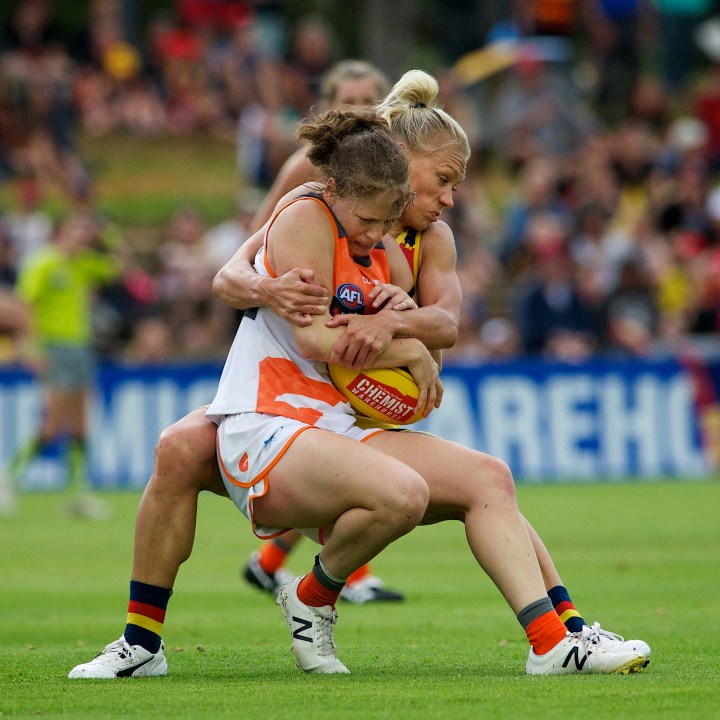 After all, I genuinely don’t want to be condescending here, not least because I’m confident that any of these women could beat the crap out of me in less time than Jack McInnes reportedly stayed on his feet on Friday night.

Because it’s not about women playing football.

It’s about the fact that a new team in a new competition cannot hope to inspire the fervour that comes with more than half a lifetime of (over)zealous support.

I have scaled the heights and scooped the depths of football fandom following the travails of the Crows men’s team, whose successes have rather ludicrously formed some of life’s most treasured memories and whose failures have slowly intertwined into psychological scar tissue that I wear like fortifying armour through every new defeat.

Sure enough, some of that passion is passed on to the new franchise by dint of their colours. But as we know from the A-League, or the BBL, a new competition takes time to capture hearts and minds, if only because success can only be truly cherished after we have known defeat.

And, let’s face it, almost two decades on since our last flag, we know it all too well. And after the wounds of each fresh defeat have hardened and callused, each subsequent failure somehow cuts just deep enough to re-open the flesh anew.

So, yeah, a six-goal win in the drizzle was a splendid start, but as supporters our stripes are earned not by revelling in home ground romps with free entry to the ground, but by persisting through every new cut to our emotional core.

Of course, that’s easy for me to say. I won’t ever play women’s football (for obvious reasons, but in any case I wouldn’t conceivably come close to meeting the standard tbh).

For many players and supporters the weekend’s games did follow years of frustration and despondency – not in the fluctuating fortunes of their team, but in the fact they did not feel represented by one.

Across the weekend, I saw so much outpouring on social media of genuine emotion, both from football aficionados and from women who could not normally be persuaded to watch a game if their life depended on it. 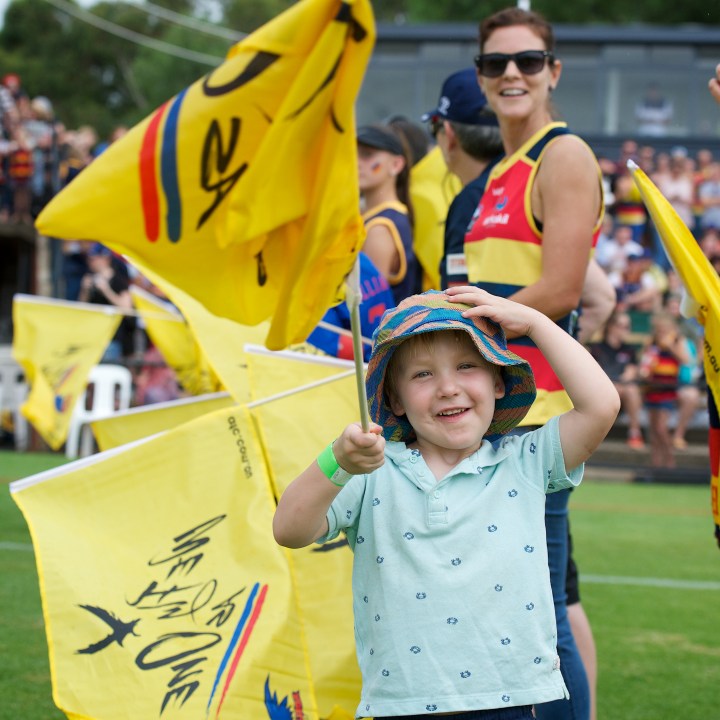 A young fan on a day to remember. Photo: Michael Errey / InDaily

It meant that both my five-year-old son and my two-year-old daughter – or neither, as the case may be – can grow up legitimately dreaming of playing Australian Rules at an elite level (unless they have inherited their father’s sporting prowess, in which case forget it).

So, one goal or 10 (actually, no-one kicked 10), it didn’t matter; every player had won, the moment they took the field.

And then there is that other small matter: that once again the Crows beat Port in joining a league, and then once again proceeded to pinch players whose names are hallowed round the streets of Alberton.

So that was nice.

But it cannot persist.

And this, perhaps, is the biggest thing gnawing at me after Round 1 of the AFLW league.

There is an inescapable reality that the Crows have no genuine rivalry in the women’s competition. Over the years, no doubt, some will be forged through torrid encounters, others confected to match television scheduling requirements.

But, looking back, there was always something missing in Adelaide’s early years in the AFL.

It was like Doctor Who before they wrote The Master into the plot; sure, the Doctor went to different places fighting villains of various malevolence, and that was highly entertaining. But the show needed the enduring presence of an opponent that represented the dark side of the protagonist’s own personality.

The yang to his yin.

So, much as it pains me to concede, the AFLW will be vastly improved once its foundations are solid enough to accommodate a Port Adelaide side.

Just as long as they don’t win the first damn Showdown!

Touch Of The Fumbles is usually published on Mondays during the AFL season.