And just like that, all was right with the world again.

It was like an epiphany: I’d been lulled into hoping the season was building towards that false dawn of a Crows premiership. But that wasn’t it at all; rather, it had all been building to this moment.

And it had all been worth it.

In a world where so much doesn’t make sense, it becomes necessary – important, even – to invent pointless narratives. And then to invest every fibre of our being in their outcome.

That the Swans, away, kicked seven goals to none against the Cats in the first term.

The week before, against us, it was seven goals to three at home.

So that made me feel better.

Against Geelong, Sydney won by 37 (a margin they first reached with seven minutes and eight seconds left on the clock in the first quarter, after Heeney kicked his miracle goal over Bartel’s head).

That, too, made me feel better.

And the knowledge that tonight’s Brownlow is the only medal Dangerfield will be wearing this week… that makes me feel infinitely better.

By the time the margin was all but insurmountable, Joel Selwood finally, belatedly cranked into gear to set two ominous records, neither particularly surprising: in one night, he won the most contested possessions (26) in an AFL final and became the first player ever to rack up 600 free kicks.

He also just shaded Paddy as the Cats’ best, although it’s fair to say it was “Dangerwood” – that weird metasexual football amalgam whereby the two become, as the Bible suggests, one flesh – that carried Geelong’s hopes, while they lasted (which was not very long at all).

Appropriately, Danger turned back the clock with a classic Danger game, whereby he found the ball at will, and shanked it towards anyone wearing a Sydney guernsey.

“Unfortunately, we just kept turning the ball over,” he lamented after the game, evidently using the Royal Pronoun to reflect his newfound prestige.

Amazingly, the stats sheet says he ran at a perfectly reasonable disposal efficiency of 74.4 per cent, which must mean his equal-game-high five clangers were noticeably egregious. I couldn’t have felt more nostalgic if Kurt Tippett had started spraying sitters from the goalsquare (which, sadly, he didn’t).

There wasn’t much in the game, beyond Sydney being awesome (and not in a good way), but I’m sure many an Adelaide supporter stayed transfixed until the final siren, and well beyond.

“I don’t want to upset you, but Sloane just won the Crows’ B&F…” Enright and Danger share a moment after the game. Photo: Tracey Nearmy / AAP

Unfortunately, though, some tactless Channel 7 cameraman with no sense of theatre kept panning away from Paddy to focus on a weeping Corey Enright instead.

Of course, revelling in the Cats’ unedifying demise meant tacitly barracking for a team with Tippett in it, which is far less than ideal.

But it was preferable.

I mean, sure, Tippett will probably go on to win a flag now – but at least we got to see him lose a Grand Final once.

And sure, his departure left a wreckage the footballing equivalent of Cyclone Tracy; and okay, he’s probably also a bigger asshole than Paddy (it’s also quite possible that he’s not, although that narrative doesn’t really match the scenario I’ve concocted for myself over the past few years).

But Tippett’s departure, while messy and traumatic, probably didn’t directly cost us a flag.

And I’m not sure we could say the same about Dangerfield.

Kurt Tippett with all his mates after the game. Photo: Tracey Nearmy / AAP

After nearly 20 years of having mostly cracking midfields and malfunctioning forward lines, the Crows finally have a attack regarded as an AFL pace-setter – just in time for our midfield to fall into relative disrepair.

The Crows engine room this season lacked a little grunt, a little pace and some X-factor – all of which was exactly what Paddy brought to bear.

Just enough to hold back a goal against Hawthorn, or win another clearance or two against the Bulldogs. That alone would have been enough for a double chance, perhaps a home final, and the major round could have been very different.

Tonight, Paddy will take home the Brownlow medal that we always envisaged him earning in Crows colours.

When he recently took the AFL Coaches’ Association Player of the Year award home to Moggs Bloody Creek, he won it (by some considerable margin, admittedly) from Rory Sloane, who took out his second Malcolm Blight Medal while Dangerwood’s Cats were being flogged by the Swans.

In other words, we would have had – arguably and for all intents and purposes – the two best midfielders in the league, as well as the highest-scoring forward line and a solid defence.

When I think of how the year played out, I imagine an aged Sloaney visiting Paddy in a Moggs Creek nursing home sometime many, many years hence and delivering him a subtle variation on Marlon Brando’s famous monologue from On The Waterfront.

Of course, there’s another famous movie monologue he could just as easily reference:

It’s not entirely rational, of course, this Paddy-whacking vitriol.

And it’s not just about the what-ifs this year: there’s also the infernal Dangerfield strut, the one we so enjoyed when it was on display under our own banner. The smug, surf-in-a-suit, “I’m a competitive beast” wankery. 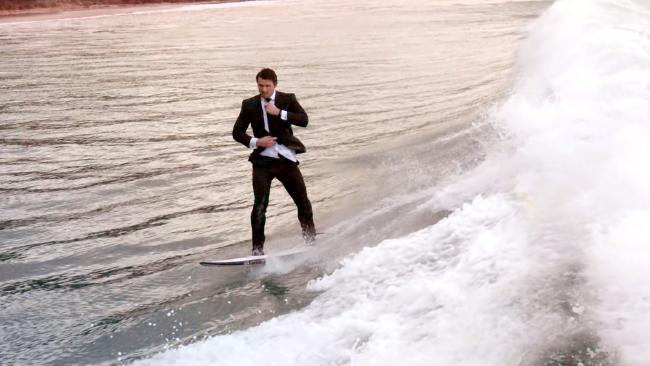 Paddy chose an unorthodox mode of transport to get to the Brownlow count. Photo: via Fox Footy

I mean, don’t get me wrong; I’m not bitter or anything.

I just would like all his “individual achievement” medals to hang like dour millstones around his treacherous neck.

It was pointed out to me after the Doggies’ incredible six-point victory on Saturday that their first Grand Final appearance in 55 years means that the Crows now have the longest Grand Final drought in the entire league. Apart from Richmond.

Yes, every single team (apart from Richmond, and the two teams that have been around for a combined five minutes) has played in the final match of the season since we last contested (and won) a Grand Final in 1998.

This is a hideous development.

It is surely a new nadir for the Adelaide Football Club to be even remotely in the same boat as Richmond, a club so ill at heart that a local cardiologist thought he was qualified to run it.

Luckily, the Tigers left the running of the Punt Rd asylum to the current inmates, and the board spill – under the ironic banner Focus on Footy – was no more, after a two-week standoff that effectively boiled down to the following exchange:

FOCUS ON FOOTY: We’re taking over the board.

FOCUS ON FOOTY: Um, well, can some of us be on the board?

FOCUS ON FOOTY: Even a pledge that the guy on the left would have a haircut and a shave wasn’t enough to win over the Tiger faithful. Photo: Julian Smith / AAP

You’d like to think that we’re better placed than the Tigers to break our drought, but we are, like them, perpetually haunted by history.

Our greatest moment of triumph over adversity in recent years came in that frenetic win over the Bulldogs in last year’s elimination final at the MCG.

I’m starting to feel like the Bulldogs might have taken more out of losing that game than we took out of winning it.

Swings and roundabouts; ups and downs.

The Giants debuted against Sydney on the same night that Anna Bligh’s Labor lost power in Queensland, in a landslide that saw them lose all but seven of their 51 seats.

I sat and channel-surfed between one-sided contests, and pondered the futures of the vanquished.

GWS lost by ten goals that night; the following week, against the Kangaroos, it was 20.

There were many more drubbings to follow, as pundits smugly mused that they ought to have followed the Gold Coast’s example of chasing after an elite marquee player.

It didn’t look like it at the time, but neither GWS nor Queensland Labor were destined to stay down for long.

The ALP was returned within a term. And on Saturday, the Giants played in one of the great preliminary finals.

Ups and downs, swings and roundabouts.

It seemed like all the world, save for a handful of orange-clad youths in the Spotless stands, was willing on a Doggies win. But why?

Besides appearing somewhat like a new race of superbeings created by a power-mad scientist who will eventually turn on and devour their maker, the Giants haven’t really been around long enough to develop a burning hatred for.

We’ve only lost to them once, and a pretty forgettable loss it was too.

There’s the whole Phil Davis thing, I guess, but he was a distant third on the table of “Most Hated Former Crows Playing In Preliminary Finals” on the weekend.

Our rivalry with the Dogs, on the other had, is long-standing, deep-seated and probably, in fairness, more our fault than theirs.

But there is, after all, little rationality in football fandom.

We choose our side, for what? Parochial pride?

If that were true, we’d as well to have been barracking for Geelong on Friday, given they pay the wages of more South Australian players than most teams in the comp, and would likely field more Croweaters than the Crows on a given night.

No, these grudges and gripes are far more convoluted than that.

I now have so many historic grudges and slights against so many teams that there is barely a fixture without some confected vested interest; I have so many sworn nemeses I feel like some football-barracking answer to Martin Hamilton-Smith.

And thus, while I always found the late-90s Western Bulldogs highly objectionable and was delighted to beat them in two preliminary finals, the fact remains that they were the only one of the four remaining teams at the start of the weekend just gone without a star player who once starred for the Crows.

And that is as good a reason as any to jump on their over-crowded bandwagon, even though that way heartbreak surely lies.

But heartbreak, I can deal with.

After all, I have had plenty of practice.

Just not as much as Richmond.

Touch of the Fumbles is InDaily’s weekly and long-suffering AFL column, published each Monday during the football season.