Nice work, Adelaide. Now give yourselves an uppercut.

Was there ever a team that believes its own hype more gullibly than the Crows?

After all the uproar about North Melbourne ‘tanking’, and all the high moral ground stuff about the Crows fielding the same 22 that smashed West Coast a week earlier, the Werribee Kangaroos played, at least for three quarters, like A-graders. And the Crows played, for the most part, like a reserves side.

Or, more generously, like a team that didn’t want to be there and had little to play for.

Which would have been true, but for the fact that meanwhile, on the other end of the country, the Lions were turning a 31 point quarter time deficit against the Bulldogs into a frenetic, seesawing contest and ultimately an eight point victory.

The ultimate fairytale ending, gifting us a vital home ground elimination final advantage … if we hadn’t already pissed that advantage away in our lackadaisical malaise.

We Screw Up As One.

It was as if Round 23 had been written by M. Night Shyamalan; of all the finales we had envisaged, that one just never really occurred to anyone.

Least of all the AFL, who adjudicated on Thursday that “the objective facts and possible combinations of results over the weekend indicate that (North Melbourne) does not have an incentive to lose (to Richmond) to manipulate its draw in the finals”.

Or, in other words: “We don’t think Brisbane can beat Footscray.” 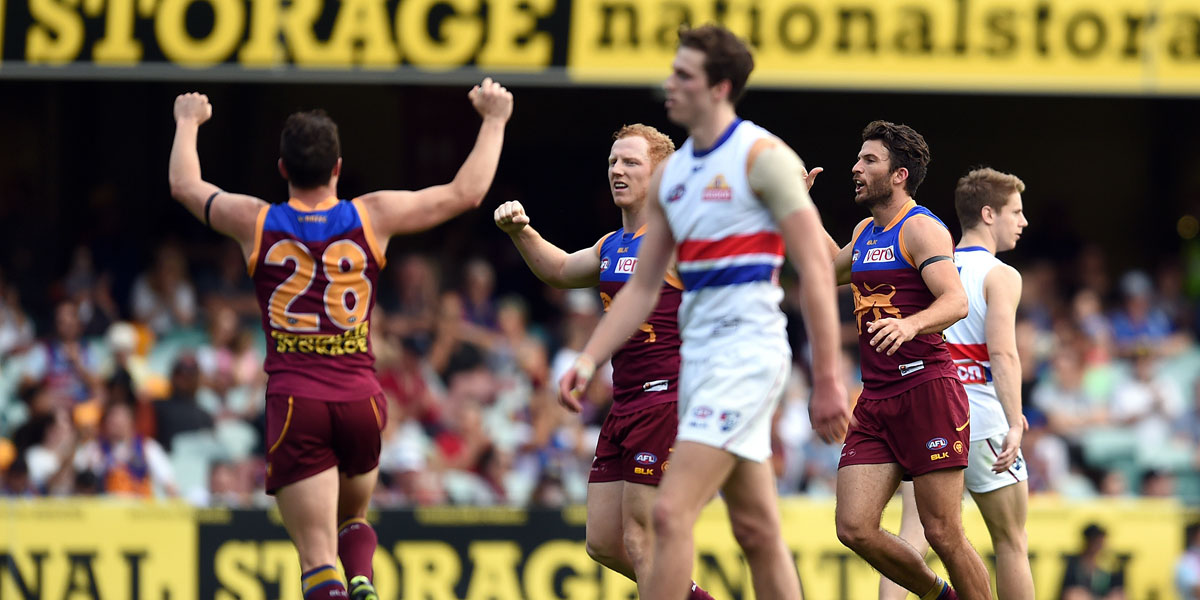 Brisbane shocked the Bulldogs and embarrassed the Crows. AAP image

For it was entirely plausible that the Kangaroos could have downed Richmond, as they had done on their previous five encounters. And, while we may laugh about it now (or cry, depending on your perspective), the Crows were considered pretty likely to beat Geelong. And if both of those things had happened, and the result in Brisbane had remained the same, North would have been jetting off to Adelaide for the knockout final.

Which means the AFL’s conviction that the Kangaroos had nothing to gain by tanking was entirely based on its firm belief that the Bulldogs simply couldn’t lose.

This, from a competition strategically predicated on the cliché that any team can beat any other team on its day.

Yep, the AFL has embarrassed itself this week.

Unfortunately though, we embarrassed ourselves more. So no-one will really notice.

There’s no point labouring the outrage about the mass resting of players when the one assumption on which our outrage was predicated – namely, that Adelaide would easily account for an age-wearied non-finalist that’s trying to pinch our best player – has proved lamentably wrong. (Side note: a mate of a mate of a mate has heard a rumour that Dangerfield will stay. So that’s a relief.)

It’s a shame, though, as the resting debate is a curious one. Two weeks ago, the Crows made a point of ‘resting’ Jake Lever, so they’re clearly not against the practice per se. Are they, then, against it only when it means results might adversely affect them? Or is there a certain critical mass of rested players at which it goes from acceptable to unacceptable? If one is ok and nine is too many, where does the cut-off lie?

In any case, these are all now questions for another year.

At least the North Reserves were slightly more competent than the Fremantle Reserves, who jetted into Adelaide and for a blissful 30 minutes looked in danger of stealing a meaningless win from the Power. Port trailed by three goals at the first break, but quickly realised losing to Peel Thunder would be a new low in a season that’s already seen them lose to the two bottom-placed sides and decided to start playing, thus completing one of the more frustrating afternoons of football I’ve had the displeasure to watch. 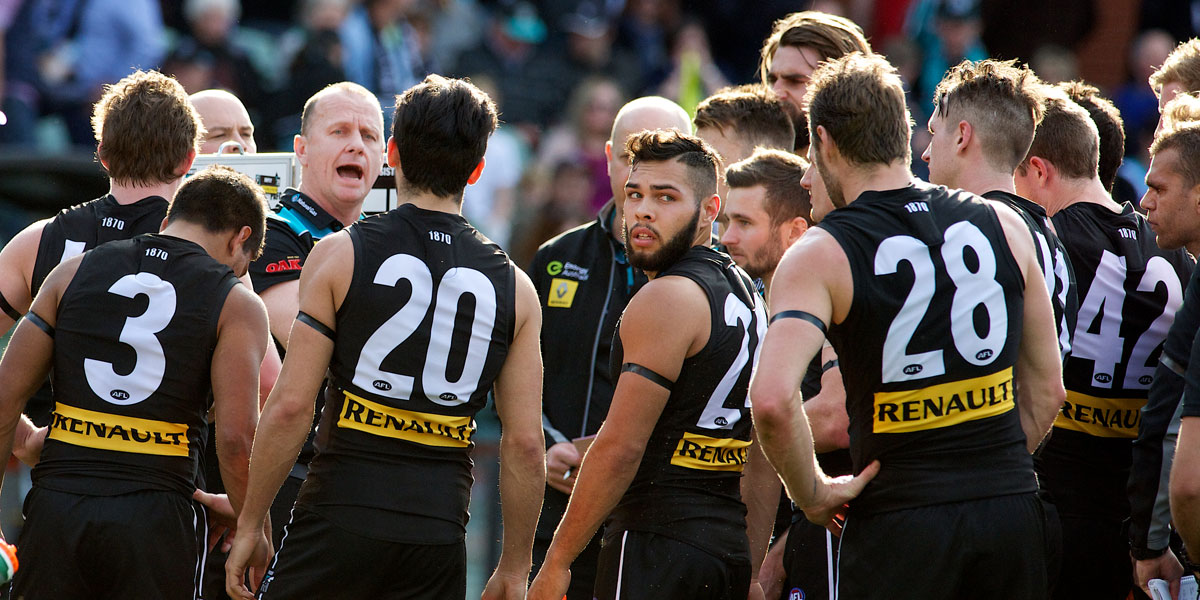 They’ve actually ended the season rather well, Port; they won six of their last seven games, and their final four once they’d assured themselves there was no risk of accidentally making the finals.

They should further bolster their stocks by recruiting disgruntled Gold Coast forward Charlie Dixon, who nominated Port Adelaide as his new club of choice on account of his good relationship with Ken Hinkley and the fact South Australia produces most of the country’s red wine.

In the meantime, no doubt, we’ll have to put up with jaded Power supporters telling us how different things would have been if they hadn’t lost to Brisbane or Carlton. To which I will offer much the same retort Bette Davis once gave to Joan Crawford.

In any case, we will be joining them in rueful reflection. Ten weeks ago, after that hideous human tragedy of Phil Walsh’s death, merely making the finals appeared a monumental ambition. And yet Adelaide achieved that, remarkably and in a fashion that had some whispering of fairytale Grand Final wins.

But that fairytale is gone now. A home final could have been a launch pad, but now an unlikely premiership would have to be built on five consecutive away trips, which makes the odds, I fear, too great.

Still, it would be nice to win a final. Just one, at least. 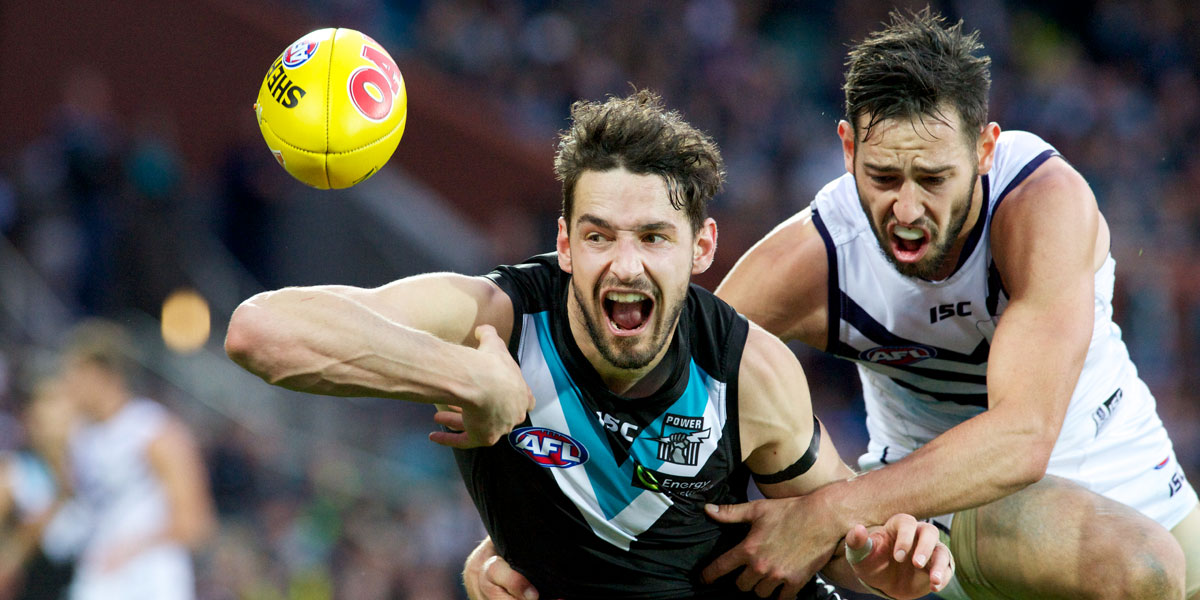 The Bulldogs, of course, will be confident given their historical record against Adelaide in finals at the MCG.

Indeed, when they smashed us by 10 goals in Round Four (a memory that does not bode well for this weekend) commentator Sandy Roberts mused that the Dogs had somehow “exacted revenge” for those late ‘90s preliminary final losses, despite the fact hardly anyone currently playing for either team had graduated primary school at the time.

So those of us who wistfully recall the heroics of Darren Jarman and Tony Liberatore’s contentious near-miss in that final quarter back in 1997, think of this: the Crows have been courting Jarman’s kid Ben as a likely recruit, and, but for a knee injury, Libba’s son Tom would be out there decimating our midfield on Saturday. Feel old? You should. There will be people drinking legally in pubs for the first time later this month who weren’t yet born when we stormed back to beat the Bulldogs that day. We can only hope Saturday night’s re-match will similarly prove one we still talk about in 18 years time. And for the right reasons.