Kyrgios’ place has been critiqued this month, with Australian team boss Kitty Chiller putting the fiery tennis star on notice while former Olympians Kieren Perkins and Raelene Boyle questioned whether the Canberran was fit to represent his country.

But for Cash the discussion is “ridiculous” and there’s no question that Kyrgios demands selection.

“What the hell. There’s no conversation in that one.

“Really? Has this been an issue? He shouldn’t be going because of his behaviour?”

When asked if the debate had caught him by surprise, Cash was unequivocal.

Kyrgios, Australia’s top-ranked player at No.19 in the world, has the support of Tennis Australia who have publicly backed his selection – but they could be overruled by the Australian Olympic Committee.

Samantha Stosur said that Kyrgios deserved to go as long as he kept his nose clean.

“I think if he wants to be there and he maybe behaves himself from now on, it’s a good chance for him to be there,” she said.

“There is a lot of criteria that goes into being a part of the Australian team.

“That’s for them to decide … I’m not too worried about it. If he wants to be there, I’m sure he could take steps to be there.”

Perkins said the 21-year-old should not be selected if it looks like he will be a distraction. 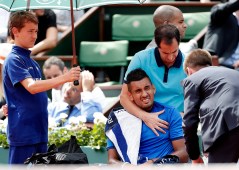 Cash tells Kyrgios to get off Twitter, Kyrgios tweets: "Leave me alone"

“There are more than 300 athletes going to Rio and you just cannot afford to have one who becomes a distraction to officials who have a lot of things to look after,” Perkins said last week.

“There is also the fact that if you let someone like Kyrgios get away with stuff, what sort of message does that send to the other athletes. You don’t want double standards.”