Adelaide United start their new campaign with a tricky FFA Cup tie against Floreat Athena. It’s easy to forget that the Reds are current cup holders. The competition didn’t proceed last year owing to the pandemic.

Floreat are a proud Western Australian club. They are four-time league champions and eight-time cup champions and only completed their season a week ago. Adelaide on the other hand will be massively underdone.

There is serious potential for a giant-kill on Sunday, a feeling Adelaide knows well after crashing out against Redlands in 2016.

And while the result will be the most pivotal aspect of the game, there will be some interest in how United line up, and if that line-up will give an indication of Carl Veart’s plans for the upcoming A-League season.

Adelaide is yet to recruit someone who’s primary position is a left-back, but Veart must be comfortable with the options he has.

Javi López, Ryan Kitto and Jacob Tratt can all play there. But I would suspect that the player who will be the one is Josh Cavallo. Cavallo was excellent in midfield for the Reds for the second half of last season, but Adelaide’s depth in that area probably forces him to play in defence, where he is a capable left-back. The position is his to lose. 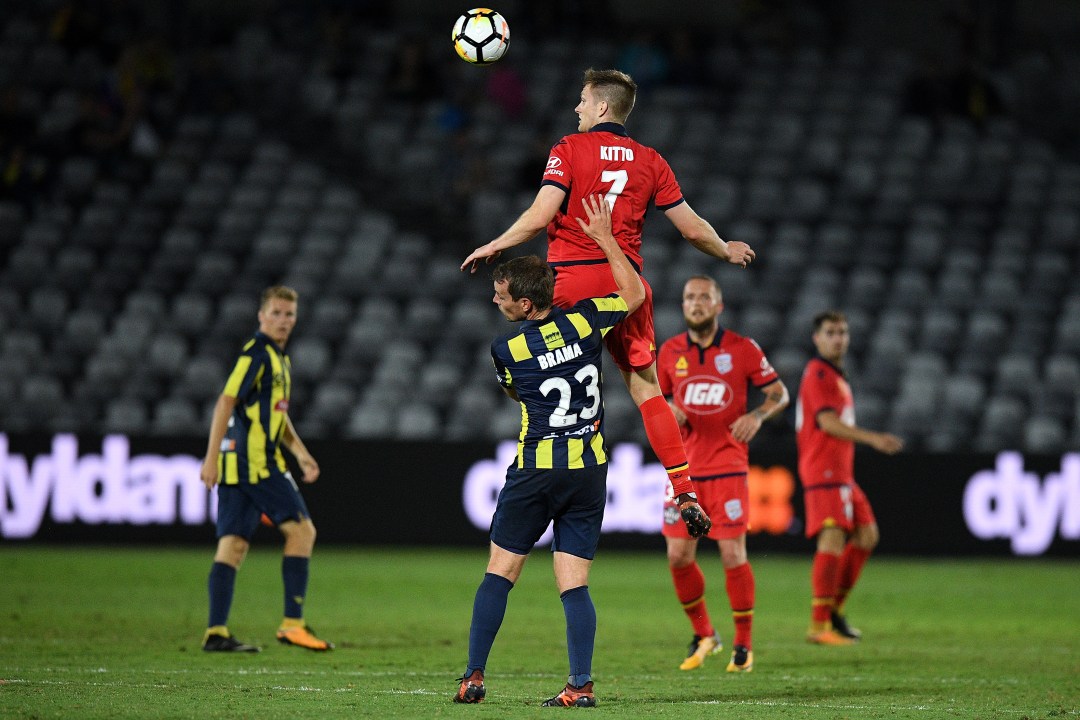 The Reds have six players who can play central midfield: Caletti, D’Arrigo, Mauk, Juande, Yull and Isaias. This doesn’t include the abovementioned Cavallo or the yet un-signed Konstandopoulos.

Assuming all those players are injury free, six doesn’t fit into three. Mauk is the club captain, so he starts. Isaias is Adelaide’s big recruit, so you think he starts also. That leaves D’Arrigo, Caletti, Juande and Yull to choose from.

And this assume that George Blackwood isn’t playing at number 10.

It’s a conundrum and someone will be left very disappointed when they’re told they’re not getting a game this weekend.

Who leads the line?

Losing Tomi Juric hurts but the blow is tempered by the emergence of Kusini Yengi, who most fans felt was the best performing striker for Adelaide last season.

Al Hassan Toure fell out of favour as he never seemed to fully recover from the injury he sustained with the Olyroos. But some time off to recharge may be what he needed, and there’s no doubt the talent is still there.

Brother Mohammed showed patches of brilliance last season, and scored a few goals for United’s NPL team towards the back end of their season. He a naturally gifted player and I for one would love to see him given more game time.

And of course there’s the returning George Blackwood, who could very well be catapulted as Adelaide’s leading striking option.

One of this quartet will need to take the next step this season in order to compensate the loss of goals owing to Juric’s departure. A fit Yengi seems the logical choice. He found his feet last season, but he will have to prove himself early as others will want the role.

At times last year, the Reds looked like world-beaters. But far too often they were poor – really poor. Essentially, United were good and bad, but not a lot in between.

Veart is still refining his skills as a head coach. Hopefully a strong reflection of some of the key moments from last season has allowed the coaching team to refine Adelaide’s game plan and in turn, that sees them performing more consistently across the year.

Things are not well at Adelaide United and whatever is happening there cannot affect the football department.

Bruce Djite left to join the Committee for Adelaide as their new Chief Executive Officer.

More recently, it was confirmed that the well-loved Ian Smith has also left his role at the club and that the club’s advisory board, announced with much fanfare, is facing the chop. The Board includes people like the worldly and highly respected Marg Ralston.

Smith told media he was leaving to focus on other commitments. But having had the pleasure of speaking to Smith multiple times throughout the years I know one thing for sure: Smith loves Adelaide United and his exit is another warning sign.

One thing is certain: Adelaide cannot take Floreat Athena for granted. What we know is that NPL clubs love the chance to beat A-League clubs. Athena lost the Western Australian NPL Grand Final last weekend. Beating the Reds will go some way to healing that wound.