Exactly 10 years ago, an event that would go a long way to determining Pim Verbeek’s legacy as the Socceroos’ coach was just days away.

The football world was heading to Cape Town for the “Final Draw” which would determine the composition of each group for the 2010 FIFA World Cup.

At the time, the draw was more of a lottery; only eight nations would be seeded (one per group) and the rest were arranged geographically. This meant that you could have a group with four teams in the world’s top dozen just as long as they were from enough different continents.

Verbeek had already walked into the job of leading Australia’s men’s national team at a challenging time. Expectations remained high after another Dutchman, the charismatic Guus Hiddink, had been at the helm for the (already storied) 2006 campaign. Fans expected a similar ride four years later.

But the zeitgeist masked that the team was already in decline. Nowadays it is common to hear that we were better then; what is less recognised is that even in the early 2000s there were fewer Aussie youth players destined for big careers in Europe than there had been a decade earlier. Indeed, ten of the 23-man squad at the 2006 World Cup were in their thirties.

Verbeek wouldn’t be able to use Mark Viduka up forward and there were no standout candidates to replace defenders Lucas Neill (then 32-years-old), Scott Chipperfield (34) and Craig Moore (34 and without a club).

These shortcomings had been largely masked by a remarkable qualifying series which saw the Socceroos secure their spot in the 2010 World Cup finals with two matches to spare – something that had not happened before nor since. From the eight matches of the campaign’s decisive group stage, Australia was undefeated, finished five points ahead of Japan and conceded just one goal – after the ticket to South Africa had already been secured.

During that period, the Socceroos’ reached their highest ever position in FIFA’s World Rankings: 14. Just before the news of Verbeek’s death broke last night, the most recent rankings update was published with Australia in 42nd place.

To paper over the cracks in the team, Verbeek used tactics which would be condemned by many pundits and fans. He protected his slowing back four with two defensive midfielders in an unadventurous 4-2-3-1 formation which relied heavily on the 3 and the 1 to find goals.

There would also be grumbles about the lack of new players being brought into the national team. But that ignored the dearth of high-quality youngsters available at the time and the fact that increasing opportunities were being given to some that didn’t go to Germany 2006 (such as Carl Valeri, David Carney and Mile Jedinak). Paradoxically, there would also be criticism of some of the faith shown in the next generation with the selection of Brett Holman being the memorable example.

Verbeek was also never credited for finding a solution up forward after Viduka’s international retirement (a solution the Socceroos would benefit from for another seven or eight years): moving midfielder Tim Cahill into the centre forward position.

And so to the Final Draw which would be so important to the 2010 Socceroos’ chances of emulating the 2006 team (which advanced to the tournament’s knockout phase).

It could hardly have been worse.

Not only would Australia face the rising German team – runner up in the European Football Championship two years earlier – that would be the Socceroos’ first assignment. Ghana (which was also about to finish second in its continental tournament, the Africa Cup of Nations) would be the next opponent followed by Serbia. The group was rated as one of the 2010 World Cup’s hardest.

The 4-0 loss to Germany is still used by Verbeek’s knockers to justify their narrow-minded views about his coaching.

Even in that case the main criticisms failed all tests of logic.

The 2010 edition remains the last one in which Australia won a match at the FIFA World Cup finals.

The selection of Richard Garcia in attack and the omission of Harry Kewell (who had spent months recovering from injury) were such big talking points that columns were devoted to Verbeek’s explanation of the decisions.

But how could the choice of a forward have much to do with conceding four goals to one of the best teams in the world?

The much larger problem was that Australia’s ageing defence was exposed. Funnily enough, when Germany smacked four goals past both England and Argentina later in the tournament, the mob were silent and not at all inclined to accept that perhaps there had been a gulf in quality that anyone coaching the Socceroos would have struggled to mitigate.

Against Ghana, Australia would record a 1-1 draw despite having Harry Kewell sent off in the first half and playing most of the game with ten men. The Socceroos’ goal scorer was the maligned Brett Holman whose selection had been fanatically opposed by the same types that denigrated Verbeek. 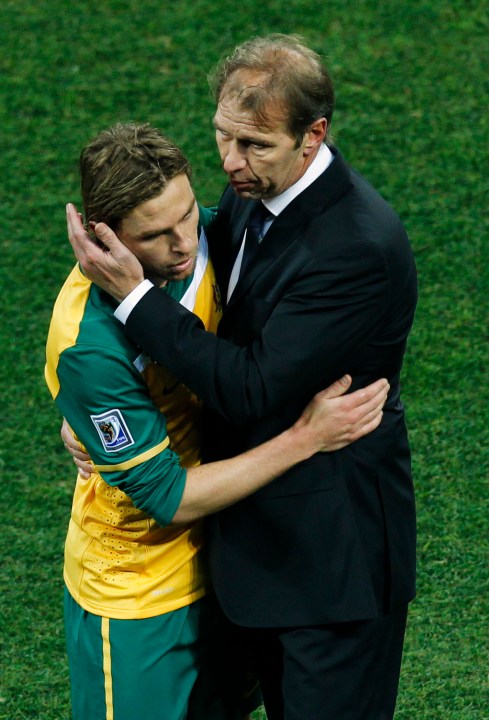 Verbeek shares a moment with Brett Holman after Australia’s match against Serbia in the 2010 World Cup. Photo: AP/Hassan Ammar

And after Holman scored again in the 2-1 win over Serbia, a result that meant Australia would only miss reaching the knockout rounds on goal difference, the ridiculousness of the commentary around the team’s campaign reached new levels: it was the players’ qualities that had to be credited for the result, not any of the tactics or selections made by the coach (but of course he was still to blame for the Germany match).

The 2010 edition remains the last one in which Australia won a match at the FIFA World Cup finals. It is also the last time there was no change in Socceroos coach from the beginning of the qualifiers to the end of the tournament.

Verbeek would continue to succeed with national teams after his contract with Australia ended. His next appointment, with Morocco’s under 23 men, saw him guide the squad to the 2012 Olympics football tournament even though only three spots were available to African nations.

And as recently as January of last year, Oman enjoyed a rare victory in the Arabian Gulf Cup (which supporters in the region are fanatical about) under his leadership. That triumph included defeating United Arab Emirates (led by Italian title-winning coach Alberto Zaccheroni) in the final.

The hours since Verbeek’s death have seen tributes from Australians which have – from those who knew him – unfailingly acknowledged that he was a decent man who was honest, personable and had a good sense of humour.

But a decade after he led the Socceroos, there is also a growing appreciation of his tenure.

I am confident that that trend will continue and wish he could have lived much longer to see it.