Australia needed a big favour from Japan – either a win or a draw in Jeddah this morning – to bail them out after last night’s hollow 2-1 victory over Thailand.

But substitute Fahad Al-Muwallad’s 63rd-minute goal capped off a frustrating night for Ange Postecoglou’s men, who will have to do it the hard way to ensure a place at Russia 2018. 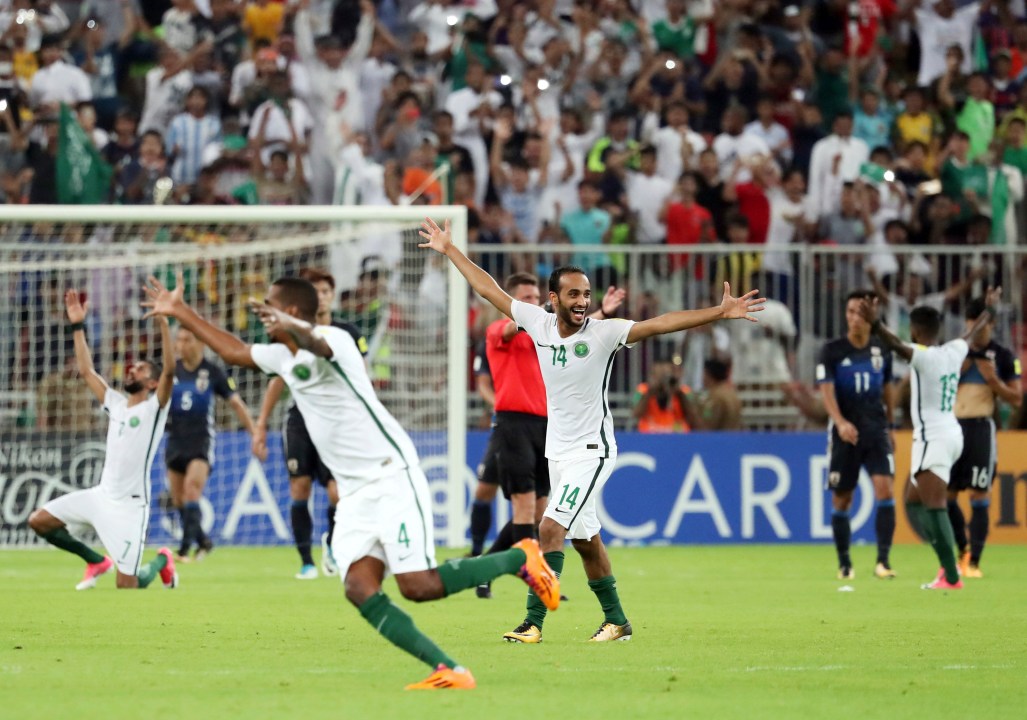 Members of Saudi Arabia’s national team celebrate after winning the World Cup final-round qualifier against Japan in Jeddah this morning. Photo: The Yomiuri Shimbun via AP

Australia now faces two difficult home-and-away ties – the first against Syria in October – to book a spot at a fourth straight World Cup.

The winner of that will go on to battle North and Central America’s fourth-placed qualifier in November for a spot at the global showpiece.

Despite an incredible 45 shots on goal, the Socceroos couldn’t find the margin against Thailand at AAMI Park that would have seen them overtake the Saudis on goal difference – meaning a win by any score for the home side would have done the job.

A close-range shot from Al-Muwallad in the 63rd minute was all the Green Falcons needed.

It relieved palpable tension among the 60,000 screaming fans at the King Abdullah Sports City, who were hoping to see their side qualify for their first World Cup since 2006.

Japan, who qualified with last week’s 2-0 win over Australia, had nothing left to play for but often looked the better side and had two certain goals cleared off the line before Al-Muwallad’s opener.

But they could not produce an equaliser against an opponent intent on running the clock down, consigning the Socceroos to a third-placed finish in Group B and piling even more pressure on Postecoglou’s shoulders.

If there is a silver lining, it is that the Socceroos could have faced a far more established opponent than Syria.

A stoppage-time equaliser from Omar Al Soma in their 2-2 draw with Iran kept the war-ravaged nation in contention for a debut World Cup, earning them third spot in Group B at the expense of Uzbekistan.

Australia could at least be spared a trip to the Middle East with Syria, ranked No.80 in the world, having played their home matches in Malaysia during this phase of qualification.

The identity of the other play-off opponent won’t be known until CONCACAF qualifiers are completed on October 10 but it is likely to be Honduras, Panama or the United States.

Australia’s 37-year-old record goalscorer Tim Cahill insisted he has never before been involved in a match quite like last night’s hollow victory.

“I’ve never played in a game like it before,” said Cahill.

“We started well, we hit probably every post and bar there was to hit – it just wouldn’t go in.”

Cahill said he and his teammates were too focused on the task at hand to notice the rising tension in the stands at AAMI Park.

“When you’re on the pitch you’re just focusing on getting the balls in the right areas and just trying to score,” he said.

“I think it was something like 45 shots… the crossing, the possession was good, yes we could have probably put the final ball in better and we could have been a little more clinical. I was hopeful of getting a five-goal win tonight.

“It wasn’t meant to be but it wasn’t for the want of trying… if you look at the game it’s just unbelievable.

“I’ve never seen so many players throw their bodies at the ball, clearing off the line.