“Do it again next year,” he said after the Sky Blues’ grand final win, on penalties, over Melbourne Victory.

And yesterday’s nailbiting 4-2 penalties win in front of 41,546 fans at Allianz Stadium – after scores were locked 1-1 after extra-time – capped a remarkable season by his Sky Blues.

Sydney lost just one game, and won the league by 17 points in a feat Arnold believed should be better acknowledged.

“The fact that we won the league by 17 points, so convincingly, that has created debate whether the premiership needs to be rewarded even more,” he said.

“Obviously the grand final is the main thing, that is what the Australian way is. So it was good just to finish it off.”

“The only stress that I had, if I did have any before the game, was just I wanted it so badly for the players for what they have done this year,” he said.

“They’re such a fantastic group of people that turn up every day with a fantastic attitude. They have got wonderful mateship.

“I didn’t have to do too much talking… they were talking about how hard we have worked since August last year.

“They were talking about the mateship and the character and saying the camaraderie in the group is going to get us over the line.”

Goalkeeping hero Danny Vukovic said his mentorJohn Crawley gave him the aces that he revealed at exactly the right moments.

Vukovic was on the money with a low save to stop Marco Rojas’ penalty and set Milos Ninkovic up for the winning spot kick. As has been the key to Sydney’s indestructible season, the stroke of genius was in teamwork – on this occasion in tandem with his goalkeeping mentor.

“John Crawley, my goalkeeper coach studied all their penalty takers so he knew where they all went with their last penalties,” Vukovic said.

“That’s usually a good indicator of where they’re going to go again.

“There were a couple he didn’t know – Leigh Broxham and Carl Valeri – but the others he pointed out and he was right.

“I knew after saving (Rojas’ penalty) that we were one kick away, so I was just praying Ninko would hit the back of the net.

“His last penalty was against Wollongong in the FFA Cup and he missed so I was a little bit on edge, but with the season he’s had I was pretty certain he was going to.”

When Ninkovic did, the pain of Vukovic’s three previous grand-final losses with Central Coast and Perth Glory dissolved.

It’s been a long wait for the 32-year-old, who admitted he may not have handled a fourth heartbreak in 11 years.

And while the win was apt reward for a career-best season that’s earned him a Socceroos recall, there was even more to celebrate off the field.

In the crowd was Vukovic’s wife and baby son Harley, who recently had a successful life-saving liver transplant.

It was the reason he moved from Melbourne Victory in the off-season, as the family sought medical treatment and family support in Sydney.

The added bonus was joining a winning team full of old teammates and his first senior goalkeeping coach in Crawley.

“Things have fallen into place very nicely for me and my family,” Vukovic said.

“My son has come through a difficult period and is out the other side. He’s on the road to recovery.

“That for me has been the main focus in the last 12 months and football has been brilliant as well.”

Melbourne Victory’s record-breaking goalscorer Besart Berisha believes his side were only short of luck in their quest to be A-League champions.

Berisha opened the scoring on 20 minutes, before the Sky Blues forced extra time and penalties from Rhyan Grant’s scrambled equaliser.

After Rojas had his spot kick saved, skipper Carl Valeri hit the crossbar as Sydney FC claimed the premiership-championship double.

It was a humbling experience for Victory, which was so close to a fourth title, but Berisha said he felt only pride for his teammates.

“The way we approached this game, the way we trained and our mentality coming into the game… I cannot criticise nothing,” Berisha said.

“We’ve been really brave and I’m proud of the way everybody played today.”

Berisha suggested that winning a penalty shootout is basically down to luck and said Victory didn’t really have much of that.

“Penalties are a lucky thing,” he said.

“It’s very hard and difficult especially when you play away (as) all the supporters boo you.

“You have to be a bit lucky. Sydney was a bit more lucky in penalties and they won.”

In scoring his opener, Berisha took his season tally to 21, equalling his best A-League haul in a single campaign. 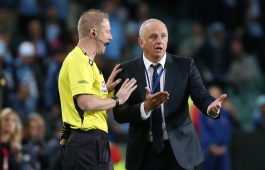 I don't like 'em, but Arnold's Sydney FC should be the A-League's best ever

It was also his record-setting seventh straight goal in a finals match.

Berisha has scored in every final he’s played for Victory and also scored in both matches of Brisbane’s successful 2014 finals campaign.

He also scored a double in the Roar’s 2012 grand final win over Perth Glory.

“I’m happy I can always help the team. It’s my job as a striker to score goals,” he said.

“In these games, these important moments I need to be there for my club.”

The 31-year-old said he was preparing to take the next penalty in the shootout but had no criticism for Valeri or Rojas.

“This is what we (planned) a long time ago. We wanted to line up like this,” he said.

“They missed one. What are you going to do?

“I’ve missed so many penalties in my career.”