Merkel said she was appalled by the incident yesterday (Australian time), in which three explosions went off as the Dortmund bus made its way to their Champions League match. Spanish defender Marc Bartra suffered injuries to his arm and wrist.

The attack forced a 24-hour postponement of the team’s high-profile clash with AS Monaco, which turned out to be a pulsating encounter that the visitors won 3-2.

“I encouraged everyone to take the game seriously but football is not the most important thing in the world,” Borussia Dortmund coach Thomas Tuchel said after the game.

Tuchel said his team felt ignored by European football’s governing body UEFA after they were made to play less than 24 hours after the attack.

UEFA says it made the decision to reschedule the game after consulting both teams, however, Tuchel says he and his players were not asked.

“We weren’t asked at any point. We were told by text message that the decision had been made in Switzerland,” Tuchel said in post-match interviews.

“When they told us ‘you’re up tomorrow’, we felt completely ignored.

“A decision made in Switzerland that concerns us directly. We will not forget it, it is a very bad feeling.

“A few minutes after this attack, the only question that was asked was, ‘Are you ready to play?’. As if we had thrown a beer on our coach.

“At that time, we did not know the reasons for this attack. There is a feeling of helplessness. The date was imposed on us. What we think has not interested anyone. We weren’t asked about playing the game.

“We would have liked more time to take stock. This gives you the feeling of impotence, that we have to keep functioning and nothing else matters.

“I encouraged everyone to take the game seriously but football is not the most important thing in the world.”

Police stepped up security for the rescheduled match and for a second Champions League quarter-final in Germany, between Bayern Munich and Real Madrid.

An exit from the Dortmund stadium was briefly closed, as police examined suspicious packages, but quickly re-opened.

Ralf Jaeger, interior minister in the state of North Rhine-Westphalia, which includes Dortmund, said the investigation was looking “in all directions”, and it was unclear if one or several attackers were involved. 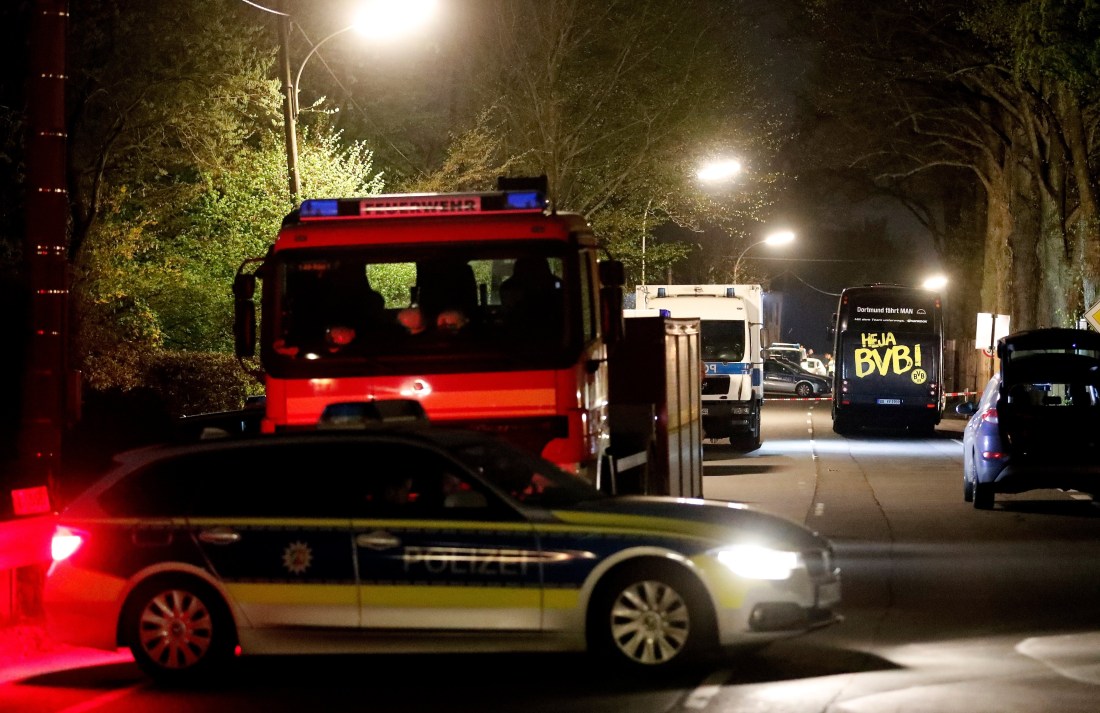 Borussia Dortmund’s team bus is seen on a street after it was hit by three explosions. Photo: Friedemann Vogel / EPA

A spokeswoman for the Federal Prosecutor’s Office, which handles probes in to suspected terrorism, said the explosive devices had contained strips of metal.

Spokeswoman Frauke Koehler said investigators had found three letters near the scene, all with the same content suggesting a possible Islamist motive.

Investigators had identified two suspects from the “Islamist scene”, searched their apartments and detained one man, she said.

The blasts smashed windows on the bus carrying the players to the stadium. Bartra was operated on for a broken bone in his right wrist and shrapnel in his arm, a team spokesman said.

“We all agree that we are dealing with a despicable act,” Merkel said at a business event in the western town of Allendorf.

“We were all appalled yesterday when we heard about the attack on the bus with the players of BVB in Dortmund.”

The blasts revived memories of Islamist militant attacks in Paris in November 2015 whose targets included a stadium where France were playing Germany in a soccer international.