The Reds completed their campaign’s dramatic turnaround on Saturday with a 4-0 away thumping of Wellington, stealing top spot from Western Sydney and firing a foreboding warning to antagonists.

With a club-record 14 unbeaten matches, Guillermo Amor’s squad have been the best performers in the season’s second half to rise above an otherwise inconsistent top six.

Now one point ahead of the Wanderers and third-placed Brisbane, they’ll have to hold their nerve through a challenging run home featuring two tough tests against Melbourne City, away fixtures with the Wanderers and Sydney FC and a home game with cellar dwellers Central Coast sandwiched in between.

Enviable form and unwavering focus has been key to the Reds’ fairytale run from dead last in November, something Muscat personally felt two weeks ago in a painful 1-0 loss.

“If they maintain their current form, naturally they will [finish top],” Muscat said.

“All credit to Amor and his team – they’ve set some standards now.”

Keep your money in your pocket

While Adelaide continues to lay a brick in the wall each week, rivals have enjoyed purple patches but floundered in key moments.

The Wanderers’ eye-catching early season form has slipped mildly, with just three wins from nine matches in the latter half of their campaign.

Recent late goals ensured Tony Popovic’s men rose above fellow title contenders the Roar and City, who have won three and four matches from the last nine respectively and suffered their own wobbles.

But Friday’s 3-2 away loss to Brisbane allowed John Aloisi’s surprise packets to regain ground and put Adelaide in the box seat.

Defending champions Victory have been up and down like a see-saw, but yesterday built some security around their delicate finals position with a 2-0 defeat of cellar dwellers Central Coast.

The top-heavy instability has made way for revivals from the bottom.

Perth are on the verge of hauling the Sky Blues out of the top six if they defeat improved Newcastle on Monday night and extend a club-record five-straight wins. 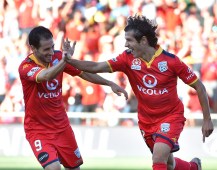 There were too many factors at play for Muscat to predict what the final five rounds will hold.

“It’s very, very tight at this point in time, which is great for the competition,” he said.

“Every time everyone puts their mortgage on someone pulling away, it becomes a bad bet.

“And when someone you think’s excluded and not in the race they come knocking on the door.

“Keep your money in your pocket.”