Germany isn’t a country known for extreme heat but on the afternoon the Socceroos played Japan in 2006, it felt like a harsh February day in Adelaide.

Fortunately a fountain outside Kaiserslautern’s stadium provided some relief for fans leaving the match.

It’s a small detail I might have forgotten had it not been for the next remarkable event on a day that gave us many.

As I walked past the fountain, a large car pulled up amid the throng of supporters. There was no mistaking the well-dressed silver haired man who emerged: Frank Lowy.

Within seconds, Lowy was mobbed by gold-shirted fans and although they were just showing their enthusiasm, I was a little worried about his wellbeing. Even back then, he wasn’t a young man.

But Lowy showed no discomfort; he was relishing the moment. He wore the smile of a doting grandparent who’d just seen the grandkids arrive on Christmas Day.

Admittedly we were all delirious after the Socceroos’ extraordinary come-from-behind win but those were also the reactions of long-suffering supporters whose day had finally come. And here was the man who gave us Dutch super-coach Guus Hiddink to maximise our chance of ending the World Cup drought.

Lowy had also been Australian soccer’s last hope as he’d picked the sport up when it was on his knees.

That moment in Kaiserslautern came back to me last night when the Chairman of Football Federation Australia tumbled off the stage before he could hand the A-League trophy to the triumphant Melbourne Victory team.

It would have been a dangerous fall for anyone but for an octogenarian the risk of serious injury – or worse – is so much higher.

Thankfully Lowy got up and we could exhale.

Nevertheless, the incident is a reminder of two realities the sport needs to confront.

Firstly, Lowy will be stepping down later this year. Secondly, all of soccer’s recent success has been on his watch.

He will be hard to replace. Lowy was already running a top club in Sydney before he played a part in the birth of the National Soccer League in the late 1970s. Fed up with its politics, he left a meaningful role in the sport in the late ‘80s.

Lowy returned to the game when the NSL was in its death throes in 2003 and he oversaw the establishment of the A-League. For more than 40 years, he’s been part of each stage of Australian soccer’s evolution.

He will leave the game in a far better state than he found it. But many challenges remain.

Grand final week gave us a snapshot of the good and the bad.

The downside included the controversy over where the match should be played, that it wouldn’t be live on free-to-air television and that yet another A-League club (Brisbane Roar this time) is making headlines because of problems off the field.

One of the highlights of the week was Melbourne Victory hosting a business lunch with nearly 1300 guests. Two games in the A-League’s history had fewer than 1300 spectators. Think about that for a moment.

Victory (and it pains a South Australian to say this) has become an unprecedented success. Choose any measure you like: on-field glory, corporate backing, membership numbers.

Other A-League clubs may look on enviously but at least they know what can be achieved. 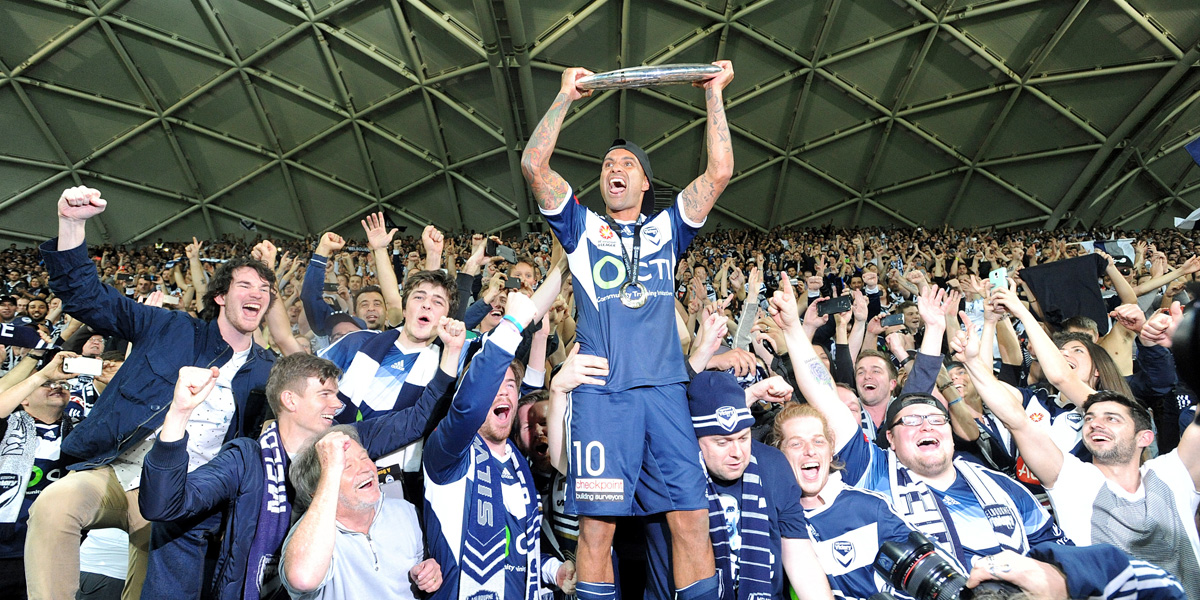 The match was also broadcast live in more than 50 countries and some of those have much better domestic competitions than ours.

And if there was a good by-product of not being able to meet the demand for tickets, it was having a full house with an electric atmosphere. Perhaps we should remind ourselves that for many years (certainly until Brisbane Strikers filled Lang Park for the 1997 NSL grand final) we could only dream of having an attendance of around 30,000.

Suddenly a rectangular stadium with that capacity isn’t enough so live sites were needed to cater for fans that missed out on tickets.

Unfortunately the game didn’t live up to the hype. Unable to cope with Melbourne Victory’s structure and pressure, Sydney FC’s insipid display could be compared to the Sydney Swans’ underwhelming performance in last year’s AFL decider. Whatever the code, not every grand final can be a classic.

With the curtain falling on the A-League’s tenth season, assessments of the competition’s first decade have been mostly positive.

The FFA had to get most things right. And it has but there have been some mistakes and other things could have been done better.

So far none of the shortcomings have wounded the A-League badly. But the next decade will be just as important as the first.

Succeed and the competition will be a genuine part of the nation’s sporting landscape. There will be adults who have known nothing but the A-League, club attachments will have deepened with time and the increasing number of participants in the sport should result in increasing consumption of the league.

But failure would mean fighting for relevance again. The A-League is already the second attempt at a national competition. It’s hard to imagine there could be a third.

And soccer will have to face its challenges without Frank Lowy, the man who lifted it out of an abyss.

Paul Marcuccitti’s soccer column is published in InDaily on Mondays. He is a co-presenter of 5RTI’s Soccer on 531 program which can be heard from 11am on Saturdays.