Seriously, how good is the A-League!

This has to be one of the best seasons of the competition since its inception.

We are seeing an average of three goals a game.

There have only been four nil-all draws all season (the last of which was on 20 February).

It’s an exciting, fast paced competition, spurred by the emergence of talented youngster across the league.

Saturday night’s match between Adelaide United and Western Sydney was an entertaining match with multiple sub-plots playing out (the return of the “villain” James Troisi, and Louie D’Arrigo’s red card and how United played after that, for example). 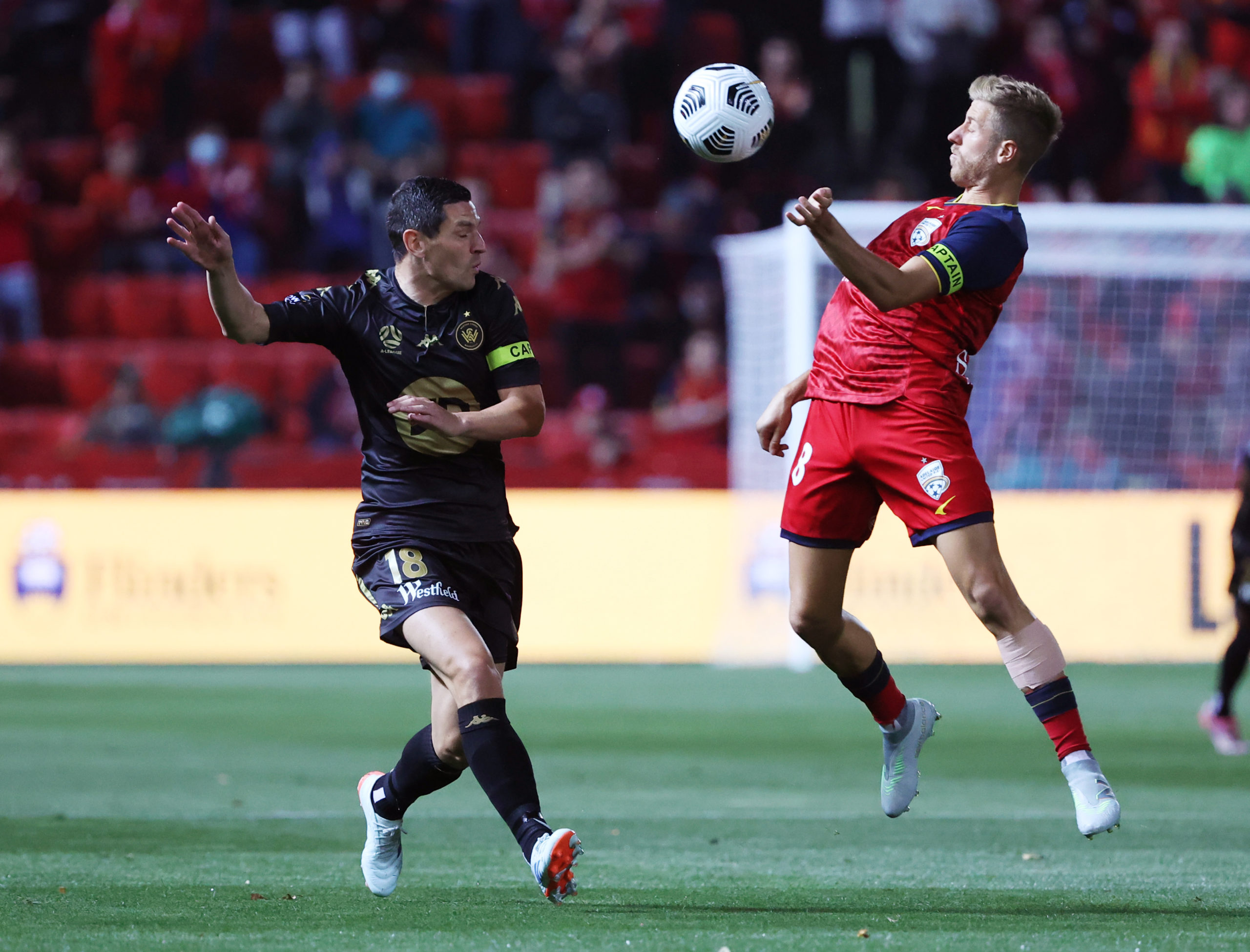 The players have done their bit to make the A-League a highly palatable product even for the less enamoured.

But, overall, are people engaged? The evidence suggests they’re not.

Only 6787 turned up at Coopers Stadium on Saturday, which was (to put it bluntly) completely unacceptable.

Unfortunately, the combined average attendance across the league this season is a mere 5383, although this is skewed by the fact the Wellington have been based in NSW this season and are averaging around 6000 less people on average to “home games”.

New A-League club Macarthur FC, who visited Adelaide for the first time Tuesday night, hasn’t really captured the imagination of their community yet either.

Their average attendance is just 3375 and they have not got more than 5000 people through the doors at any point this season.

It is only the abovementioned Phoenix that are averaging fewer spectators this season.

Interestingly, Adelaide United is leading the league this season for average attendances with 7556, just ahead of Sydney FC and Brisbane Roar.

The evidence suggests that Foxtel has also given up, as they edge closer to their seemingly inevitable exit as the A-League broadcaster: their coverage lacks love – and that’s being nice about it.

Broadcasts start close to kick-off, only allowing for minimal build-up and discussion, a lot of games have only had a sideline reporter in actual attendance – with the play-by-play and expert commentators calling from the east coast – and there are no more magazine shows.

Unfortunately, even your most ardent of A-League supporters would see that Foxtel will not be renewing their contract to broadcast Australian soccer’s top tier.

And, to be honest, Football Australia is probably looking at what they’re dishing up and thinking they may not even be interested in offering them another crack.

Football Australia and Australian Professional Leagues find themselves in a spot of bother about TV rights.

Those who have been around for long enough know what happened last time the rights were given to a free-to-air broadcaster: Channel 7 buried the old NSL deep in its schedule.

I doubt those scars have healed.

SBS are not exactly the powerhouse of the game they once were but, along with the ABC and Channel 10, have dabbled in broadcasting games.

However, none seem to be falling over themselves to be the next broadcaster.

The future of A-League broadcasting seems to be heading in only one direction: streaming.

I think most fans would love to see it head over to Optus Sport where many well-loved Australian soccer commentators, experts and anchors work.

But, as explained before, bridges have been burnt there, and may still be smouldering.

(A quick note on Optus Sport: many have not forgotten what happened during the 2018 World Cup. Those issues are long gone. SBS was held up to be the saviour back in 2018 when they stepped in to broadcast games. Many forgot it was SBS who sub-leased the rights to Optus in the first place).

Does the FFA go it alone and produce its own streaming service?

Some have suggested that’s the best way forward, but the production value has to be substantially better than the dross that has been served up by Foxtel and Kayo this season,especially during W-League games.

And to do that, a lot of money must be invested; money that probably doesn’t exist. You need camera operators, commentators, sidelines commentators, graphics experts, technical staff and so forth.

Does FA and APL take a risk on another streaming service? That’s also a possibility.

Sports Flick shocked the country when it announced it had secured the Champions League rights from next season for around $20 million, outbidding current holder Optus.

It was a big splash for the NSW based start-up, with a stable of sports that are eclectic, to say the least (Serbian rugby anyone?).

But again, they would be streaming coverage produced overseas. Producing your own coverage is another challenge.

So it’s going to be an interesting few months for our game as it enters arguably its most crucial period in its short history. It needs a naming rights sponsor and a broadcaster. No easy feat at all.

Many are taking delight in the fact that the A-league could well and truly be on its knees in a few month. And, I’m sad to report that many of those are football fans who are still living in the past.

As a community we have a role in this process for the next few months. We need to show potential sponsors and broadcasters that their money is worth investing.

The ramifications will be felt across the whole game in Australia if they don’t, with many jobs on the line if the right amount of funding isn’t sourced.

So here is my war cry: get to games and pack the stadiums (within the COVID rules of course).

To those of you who are deliberately staying away from Coopers because you have to wear a mask: seriously, it’s time to get over it. There are greater things at risk right now.

It’s time to stand up as a community, as a family and show the Australian sporting public what we are made of.

Stay with me on this one, it’s tricky…

There is another interesting game being played tonight and that is the Round 1 FFA Cup 2021 South Australia Preliminary Round clash between Ghan Kilburn and Adelaide Titans.

The fact that the fixture is going ahead has raised eyebrows. Why, you ask?

Well, Ghan has been in hot water after a melee in a South Australian Amateur Soccer League pre-season Cup game against Adelaide Croatia Vukovi Soccer Club.

Ghan were fined $1350 and deducted 18 competition points for 2021, and excluded from SAASL Cup Competitions. Adelaide Croatia Vukovi Soccer Club were also docked three points and fined $450. Now the club has removed itself from the second division on Sundays as they are unable two field two teams. They will see out the season in division eight.

Ghan nominated to play in the FFA Cup 2021 South Australia Preliminary Rounds. The SAASL is now affiliated with Football SA, which allows this to happen. At this stage Football SA run the competition.

The eventual winner of the South Australian section enters the competition proper with Adelaide United and Football Australia assumes control.

Everyone was expecting Ghan to be kicked out FFA Cup as well. Here’s where it got tricky. Ghan appealed the findings of the SAASL Investigation Committee.

But, the appeal, which is being heard by an independent body, is yet to go ahead. Therefore, Ghan are free to play their first round match against Titans.

It’s akin to an Olympian being found guilty of using performance enhancing drugs close to an Olympics, appealing that finding but the appeal only happening after the Olympics. The Olympian is still free to compete.

What remains to be seen though is if the independent body uphold the sanctions and Ghan are removed from the competition. Will that mean tonight’s game is declared a forfeit and Titans progress nonetheless? Fun times.

Spiro Karanikos-Mimis is InDaily’s soccer columnist, a registered participant of the SAASL and a commentator for Football South Australia.