Earlier this year, Tottenham Hotspur’s Argentine manager Mauricio Pochettino somehow managed to talk down a match that would see Wembley Stadium nearly packed to its capacity of 90,000.

“It would be fantastic to add that trophy to the club, but what would put us to a different level would be to win the Premier League or Champions League.”

There was a time at which such a statement would have been seen as heresy by English fans, especially at Tottenham which would have a fairly modest trophy cabinet had it not been for the club’s tradition of being “cup specialists”.

But these are the realities we now live with. The glamour and big money available in the UEFA Champions League mean that qualifying for it (by finishing in the English Premier League’s top four) trumps winning a trophy – even one with almost 150 years of history attached to it.

It’s also a sign of another expectation that we’re seeing more of in soccer – that winning something should lead to other things (e.g. qualification to a higher league or another competition). These days, a trophy isn’t always an end in itself.

And you could say that that makes the FFA Cup the least important of the three domestic honours available to A-League teams. Both winning the Premiership (for finishing top after 27 home-and-away-rounds) and winning the Championship (by taking out the grand final) guarantee participation in Asia’s Champions League.

Yet it would be remiss of all of us who love the game to dismiss the efforts that have taken us to tomorrow night’s final between Adelaide United and Sydney FC at Hindmarsh Stadium.

This is the one competition that brings together teams from all levels: the A-League’s finest, semi-professional teams in state leagues, and the genuine amateurs who keep their clubs afloat with registration fees and snags from their volunteers’ barbecues. The FFA Cup is the people’s cup.

Its last match may resemble an A-League match but, tomorrow night, players from Ghan Kilburn City, Blackfriars Old Scholars (two teams that defeated more fancied outfits in earlier rounds this year) and nearly 800 other clubs around Australia can say that they were part of the competition.

If we lose sight of that, we risk losing sight of one of the secrets of soccer’s success: it’s a sport in which pitting together clubs from quite different levels is possible. And some of those matches will produce upsets.

Adelaide United and Sydney FC are starting to look like cup specialists themselves. 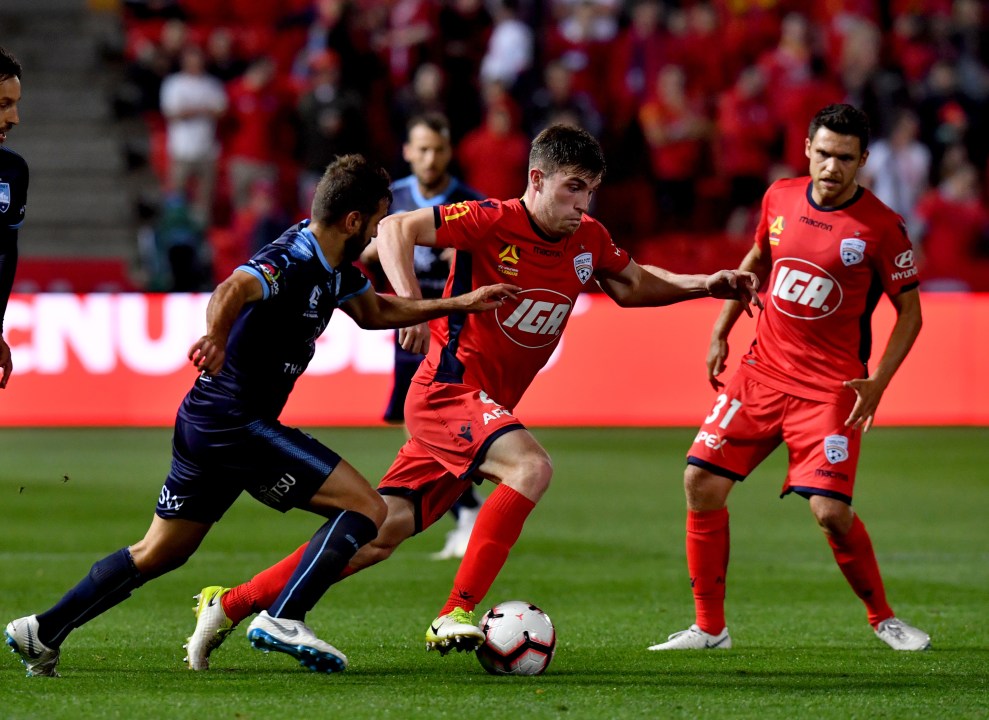 Ryan Strain of United (centre) controls the ball during the Round 1 A-League match between Adelaide United and Sydney FC at Coopers Stadium. Photo: AAP/Sam Wundke

Although this is only the FFA Cup’s fifth edition, tomorrow night, one of the two clubs will become the first to win it twice. And they’re already the only two clubs to reach the final on three occasions.

Perhaps even more extraordinarily, it’ll be the fourth FFA Cup meeting between the Reds and the Sky Blues – 2016 was the only year in which they missed each other. The three previous encounters included last year’s final in Sydney.

Given that Sydney FC has collected three championships and three premierships in the A-League, the title of cup specialists might be less welcome at United as it might suggest that the Reds’ best route to a trophy is not through end-of-season silverware.

But let’s not underestimate how hard it’s been to win anything during this period of Sky Blue dominance. Four of the last six domestic trophies available to A-League teams have been lifted by Sydney FC. Better to be a specialist at winning cups than nothing at all.

The Reds hold some aces for the decider. Home ground advantage and an extra day’s rest since their last game. But, once again, early-season injuries are hampering the team.

Still, the 11 that started Friday night’s clash with Newcastle should be available. That Reds combination may lack firepower with so many forwards injured but it is hard to break down. A similar line up gave the Sky Blues a tough match in the opening round of the A-League just 10 days ago, which finished 1-1.

The game is unlikely to be a classic because it’s hard to see United’s primary concern being anything other than negating Sydney’s attacking threats. But it’s that approach that will give the Reds their best chance to repeat their triumph of 2014 – the FFA Cup’s inaugural year.

And it would definitely mean something. In its earlier years, Adelaide United identified itself as “The People’s Club”. Why not have a reputation for success in the people’s cup?