Retired sports journalist Mike Sheahan certainly slipped back into the hypebole of Australian football when he said: “Running the AFL is similar to being the Prime Minister. Except more people care about the AFL.”

In a telling sign of how the Australian Football League has become much more than a sporting federation, former SANFL chief executive Jake Parkinson knows just why Sheahan’s observation rings true. He has been in rooms shared by top politicians and AFL executives.

“I have watched Prime Ministers and senior ministers make their way through the room to (current AFL chief executive) Gillon McLachlan,” Parkinson told InDaily. “Prime Ministers know how the public love the game; they understand the level of influence the game has in Australia.”

So does the AFL Commission, the board that is charged with setting the agenda for every level of Australian football. However, in line with how Parkinson measures the game’s significant influence outside the white lines of football fields and into the Prime Minister’s office at Canberra, the AFL has gone far beyond just running a sport. It has taken on so many social agendas it virtually acts as the nation’s moral compass on racism, gender equality, social inclusion and diversity.

For the first time since it was established in December 1985 – taking the power away from club-appointed directors loaded with self-interest for their teams – the AFL Commission has no former player from the elite national league or the State leagues such as the SANFL. The chairman, Richard Goyder, is a corporate executive.

It has taken on so many social agendas it virtually acts as the nation’s moral compass on racism, gender equality, social inclusion and diversity.

“It is a model of good governance and that is important,” says Parkinson. “But you also need a commission that is good at managing the needs of the game. That is why (inaugural Crows chairman and North Adelaide premiership full back) Bob Hammond was so respected as an AFL commissioner. He understood the game. He was experienced in corporate dealings.”

The commission’s ex-officio member is the AFL chief executive. This had been, from 1993, either a former AFL player (Ross Oakley and Andrew Demetriou) or a former SANFL player (Wayne Jackson) until McLachlan’s appointment in April 2014.

“He is a genuine football lover,” Sheahan says of McLachlan, a former amateur player with his time as a Melbourne University “Blue” often noted, particularly by the game’s satirists.

McLachlan will leave his job in October after the AFL men’s season closes with his legacy – either the advent of the AFLW national women’s competition or the league’s survival through the COVID pandemic – being tarnished by how the AFL has recently managed the game on the field.

Last week, it was dismay with tribunals which now factor against a reported player “the potential to cause serious injury” even if there was no injury at all; that change cost Adelaide ruck Montana McKinnon a place in the AFLW grand final for a bump that caused no harm to her Fremantle opponent during the preliminary final.

Brownlow and Magarey Medallist Nathan Buckley says the AFL has with these contentious rules and interpretations set up a “train wreck in slow motion”.

Former Adelaide and Fitzroy coach Robert Shaw adds: “The AFL has totally lost the plot and feel the for the game.”

“The dissent rule was designed to stamp out abuse towards umpires and to encourage players to be role models to footballers in lower leagues. But now it is so hard to enjoy a game of AFL football. Instead of enhancing the player-umpire relationship, and the fans’ appreciation of umpiring, the downward spiral has just continued.”

North Melbourne premiership defender David King argues: “The AFL has put the umpires in a poorer position; the league has created another angle to the anger directed at umpires.”

The AFL has totally lost the plot and feel the for the game.

The list of former coaches and players repeating these sentiments is quite long and echoed by fans expressing their frustration. The backlash is  heard on talkback radio, fills digital forums and is measured at slow-swinging stadium turnstiles. It’s not the ideal background noise for the AFL as it tries to coax supporters back to unrestricted football venues after two years of COVID lockouts.

Many now fear the AFL Commission, without a former player on its panel, has lost focus on the game to emphasise corporate governance (and make the AFL a forceful player in social debates). This makes the need for a football-strong chief executive to follow McLachlan seem paramount.

The most obvious contender would be Richmond chief executive Brendon Gale. He played 244 AFL games for Richmond as a ruckman-forward from 1990-2001. He studied law. He has led the AFL Players’ Association. He has lifted Richmond from a basket case to a premiership-winning powerhouse since becoming the club’s chief executive in 2009.

As a Tasmanian he cannot be accused of Victorian bias, and has repeatedly reached out to non-Victorian clubs to enhance a national agenda that is highly likely to include a Tasmanian-based team in 2028. But, notes Sheahan, if the market for McLachlan’s successor was being framed for an office pool inside AFL House in Melbourne, Gale would not be on or near the top line of betting.

“At AFL House there is a reluctance towards Brendon,” said Sheahan, repeating a theme spoken since 2020 when McLachlan’s exit from the chief executive chair was delayed by the need to negotiate a demanding agenda created by the CVOID pandemic. “I can’t put a finger on it, but it does exist.”

The early field of prospective applicants or headhunted candidates to succeed McLachlan is heavily loaded with women, giving the AFL Commission another chance to work a social agenda by smashing a glass ceiling in the still male-dominated sport.

Inside AFL House there is the league’s commercial chief Kylie Rogers, who has played a major role in redefining and strengthening the league’s business profile. Outside, there is former Australia Post chief executive and current Collingwood Football Club board member Christine Holgate who was introduced to Australian football on her arrival from England in 2002, and current Western Bulldogs president Kylie Watson-Wheeler, the managing director of Walt Disney Australia.

Also inside the AFL executive, with ambitions to succeed McLachlan, are the league’s legal eagle Andrew Dillon and Travis Auld, who has experience in “club land” as a former chief executive at Gold Coast. Of this duo, Auld carries greater confidence from the AFL clubs and the State leagues.

McLachlan has set himself a heavy six-point agenda before he clears his desk. The tasks include a new broadcast deal from 2024 for the AFL and AFLW competitions; new collective bargaining agreement with the players’ union for AFL and AFLW players; funding arrangements for the clubs, 13 of which have debt covered by the AFL; the Tasmania question; starting the first AFLW season with all 18 clubs, including new arrival Port Adelaide; and “overseeing the increased investment in community football to support schools, volunteers and community clubs”.

The last agenda item – football outside the AFL – is a lingering sore point among those nurturing the game around the big professional league. There are those with long memories of how one of McLachlan’s first promises as the new AFL chief executive was to start a “sweeping review” into the needs of all football under the AFL.

In 2015, in his first year as AFL chief executive, McLachlan wanted a sport held back by century-old power struggles between state leagues – none fiercer than the brawling between the SANFL and VFL-AFL – to finally have a unified game built on “partnerships with the AFL”.

Parkinson recalls: “We had volunteers at grassroots football who were frustrated with how they were working with limited resources while everything was rising to the top. We even heard at the start of the McLachlan era from (then AFL football boss) Steve Hocking how the AFL was too focused on the top of the pyramid.”

“Whatever happened to that review?” asks former SA Football Commission member David Shipway, who today remains heavily involved in country football across South Australia. “What did come of that review?”

The review – titled Future Directions of Australian Football – was led by former Melbourne player Grant Williams, who today works at the AFL as national talent development and competitions manager.

“We put our submission in,” says Parkinson.

The initial suspicion among SANFL ranks was that the AFL Commission – which at that stage was covering the SANFL’s unprecedented $45 million debt profile – and McLachlan’s new league executive wanted to put every State league (SANFL, WAFL in Perth, VFL in Melbourne and NEAFL in Queensland and New South Wales) under AFL control. This concerning prospect ensured the SANFL used its first multimillion-dollar spoils from selling the Football Park precinct to Commercial and General, towards clearing its debt at AFL House.

So what did the SANFL get from the McLachlan review of the State leagues?

“The AFL funded one development officer (former AFL and Norwood player Robbie Neill) to manage 7500 female players,” Parkinson said. “And access to $1 million to help fund the new facilities needed for women’s football. But the solutions for all the big, longstanding issues in our game were found by our volunteers at the grassroots of the game.”

Sheahan regards the AFLW as McLachlan’s true legacy. But he adds McLachlan, who fast-tracked the start of the national women’s league from 2020 to 2017, has paid “lip service” to the issues brought on by the explosive growth of women’s football under the AFLW. 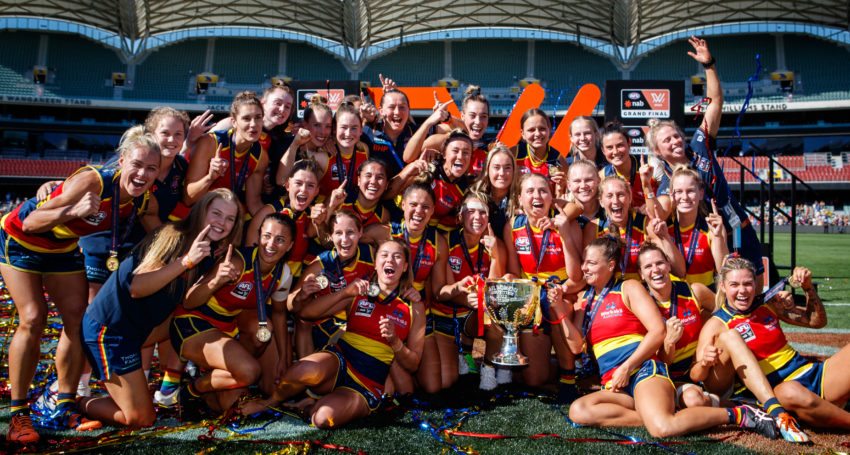 This is in line with the remarks a leader of a large community football league made directly to McLachlan recently, saying: “You opened the gate (for women to play elite football), but you’re leaving the real job (of preparing AFLW players) to me and the volunteers.”

The alarm bell today is how so many of these volunteers have stepped away from community and country football during the COVID shutdowns. Some leagues and clubs have struggled to restart.

“We have country clubs no longer getting players living or studying in Adelaide come back at weekends to play for their country towns,” Shipway said. “It has been hard to start up again.

“Go to Mount Gambier to see what has become of the once-powerful Western Border Football League. It is a shadow of its former self (after losing clubs to Victorian-based leagues).”

This has not been lost on McLachlan, who in mid-February sent a revealing letter to all Victorian-based community football clubs. He wrote: “On behalf of the AFL Commission, I again want to thank you, and all of your volunteers and staff at your club, and at every club across this state, who do so much week-to-week to ensure the strength of our grassroots game.

“This has been a long and difficult two years for all across Victoria, and we have endured much in every part of our lives … and it is now the time for the AFL to say thank you for all you have done. As a way to thank you and your club volunteers, we would like to offer four complimentary tickets to your club” for the AFL’s opening round (in late March) and the AFLW’s round 10 matches.

The AFL needs a new chief executive; one that has the game at heart and not the power to direct Australia’s social compass, no matter how envious Australian Prime Ministers become of football’s emotional hold on the public.