“That’s why people buy memberships at your football club,” Cunningham says. “They are buying hope every year. It is the most important feeling a club can offer its fans at the start of a new season.”

At Port Adelaide, where the fans once proudly wore T-shirts with senior coach Ken Hinkley transposed over Obama and the famous “Yes We Can” motto reworked to “Yes We Ken”, hope is evaporating. 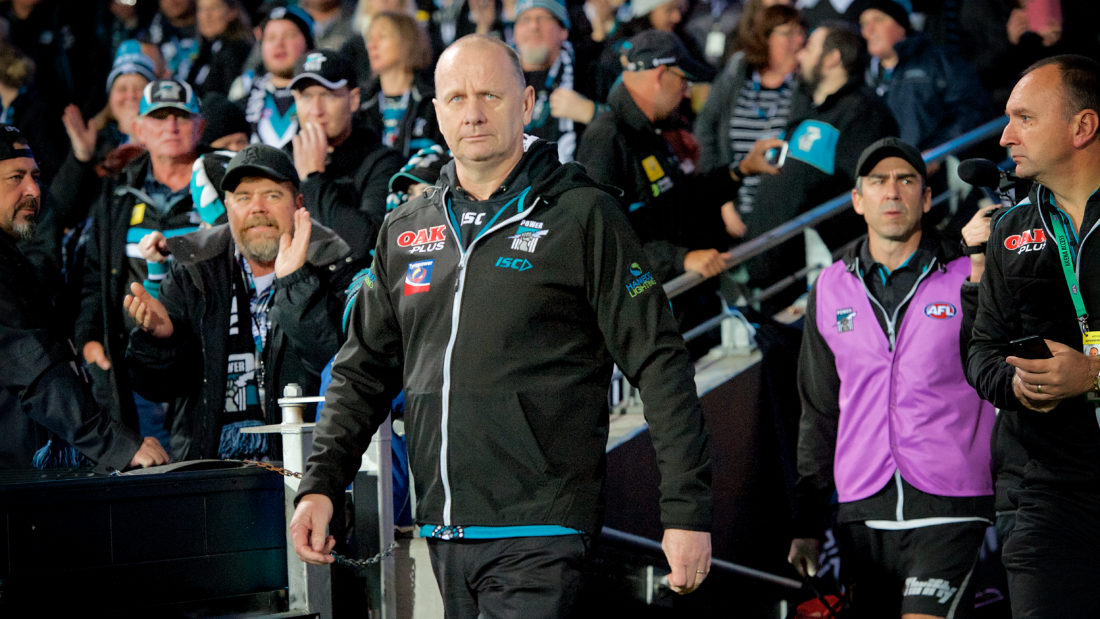 At 0-4, the team that has played in the past two AFL preliminary finals appears unbalanced by injury and is already consigned by many pundits to the category of also-rans – in a season with 18 home-and-away rounds still to play.

Just two clubs have overcome such a bad start to rekindle hope. North Melbourne rebounded from a 0-4 start in 1975 to win its first VFL premiership when the competition had 12 teams all based in Victoria and a top-five final series. Sydney overcame a 0-6 start in 2017 to reach the semi-finals of the top-eight play-offs in an 18-team national league.

Technically, last-ranked Port Adelaide – the only team without a win so far this season – remains in the chase until it loses 11 of its 22 programmed matches. While there is life, there is hope – albeit diminishing.

To stand out, more and more clubs are drawing up “strategic plans” or “blueprints” that are following the concepts detailed in the once-lampooned Richmond Football Club’s 10-year plan. Intended to be a club-only document, the mission statement was publicly leaked in 2010. The dream – externally ridiculed as “delusional” – was to win three premierships by 2020, be debt-free and boast 75,000 members.

But each goal was ultimately fulfilled or exceeded. Richmond had 100,000 members before 2020, even if much of the hope among the club’s fans was strained just before the 2017 AFL flag triumph against Adelaide ended a 37-year premiership drought.

That 2017 season also marked the year in which former Victorian Premier Jeff Kennett returned to the Hawthorn Football Club for a second stint as club president. He arrived with an unprecedented 33-year plan, broken up in six five-year chapters. The mission statement, among many goals, seeks to have the Melbourne-based club win seven AFL premierships from 2018-2050.

Already, the vision titled “Dare to the Different”, is behind schedule on its first five-year leg because it was to have delivered two premierships by the end of 2022; there has been none since 2015.

Five-year plans have a bad reputation in the VFL-AFL. There was no success when Ron Barassi returned to Melbourne as coach with a five-year plan in 1981 after winning premierships at Carlton and North Melbourne. Nor did the five-year plan deliver for Richmond after it appointed Terry Wallace as coach from 2005.

“That’s the problem with plans that can be audited – if you don’t deliver, you look stupid,” says leading South Australian advertising strategist Andrew Killey, who has built marketing campaigns for football clubs at SANFL and AFL level, including his beloved Norwood and arch-rival Port Adelaide.

Kennett, in his typical fashion, continually ignores the ridicule of his 33-year plan. But can they do the same at the Port Adelaide Football Club? In February 2021, soon after Matthew Richardson succeeded Keith Thomas as chief executive, the club boldly declared its on and off-field targets that seek to match Richmond’s success, but in half the time; just five years.

Port Adelaide calls its campaign “Chasing Greatness”. It demands three AFL premierships be won by 2025, along with 100,000 members (up from today’s count of 56,577) and a debt-free balance sheet, after carrying as much as $12 million of red ink in the past decade. If there is no miracle flag in September – a result that would most probably would end the trust in Ken Hinkley, despite his contract to be senior coach at Alberton next year – the new coach would be chasing an unprecedented three flags in their first three seasons.

Essendon in December released its five-year blueprint and surprisingly titled it “We Exist to Win Premierships”, the mantra carried by Port Adelaide for decades. As outspoken football critic Kane Cornes notes, the AFL is the “copycat” league.

Essendon is in a 21-year premiership drought and is without a grand final appearance since 2000 and no finals win since 2004. It is seeking by 2026 to have another AFL flag to add to its 16 VFL-AFL titles. It also wants 125,000 members, to lead the league in revenue, merchandise sales and combined audiences based on attendances, television and social media, and be a “national leader in Indigenous community advancement on and off the field”.

Fremantle went to its members in late November with its bold strategic plan: a breakthrough AFL flag and one in the AFLW, along with 80,000 members in the next four years and regular attendances of 50,000 at home games at Perth Stadium. And club chief executive Simon Garlick does not fear Killey’s point of this ambitious plan being audited at the end of 2025.

“We want everyone to hold us to account,” Garlick says. “There is always a risk when publicising our aims and aspirations. But that’s the beauty of it. You can – as many clubs do – stay quiet, put your head down and avoid attracting too much attention. We’d much prefer to set ourselves ambitious goals and do everything we possibly can to achieve them. We have put ourselves on the hook.”

Cunningham, now a successful consultant to corporations and government agencies, admires AFL clubs that declare more than just hope on their agenda.

“You can be bland and start each season modestly saying, ‘We aim to make finals’,” Cunningham told InDaily. “And if it becomes a tough year, you live off excuses and know no-one will hold you accountable for failing to deliver on a promise or a projection of being a finalist or a grand finalist or a premiership winner.”

Cunningham picked up this theme from Liverpool Football Club legend Bill Shankly. He once argued sporting teams should fearlessly set lofty standards saying:  “Aim for the sky and you’ll reach the ceiling. Aim for the ceiling and you’ll stay on the floor.”

“It is very different if you have to live up to a goal,” adds Cunningham. “I believe if you take that big risk – as Port Adelaide has done and those examples at Hawthorn, Essendon and Fremantle – you will have a greater drive to succeed.

“Internally at a football club there would be the debate about how much of your expectations do you put out there? Port Adelaide has put it all out there – three flags in five years. I do like it. They are strong enough to take the risk in saying exactly what they want and expect to achieve. That is the Port Adelaide I know,” adds Cunningham who played 256 SANFL games for the club and was chief executive from 1992 to the breakthrough AFL premiership in 2004. 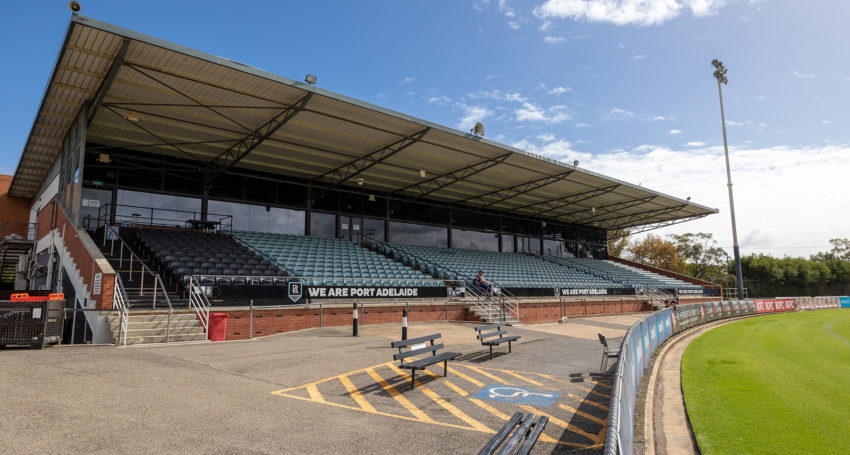 But Killey argues the AFL clubs that embrace the risk described by Cunningham, with full public disclosure of their internal aspirations, are “stupid”.

“Bloody stupid,” says a founding father of the KWP! advertising agency. “You can’t guarantee those results. It has backfired on Jeff Kennett at Hawthorn. And it now has the Port Adelaide Football Club in what I call the ‘Scott Morrison vortex’, surrounded by yapping dogs creating not only distracting noise but confusion. There are two factors in this vortex. Your fans are disappointed and frustrated. And those fans that hate your club are happy to join in the noise. Neither group gives you a break.

“There is an old saying: ‘If you don’t look after your kids, someone else will’. It is the same for people, businesses and sporting clubs that allow their brand to be defined by others. The challenge for Port Adelaide is take control of its brand – they have to get back that control of how they are seen and presented.”

This sort of stuff can come back to bite you,” Cornes said. “We’re too much of a copycat league. Richmond did it. Their chief executive Brendon Gale goes on television, on the Footy Classified panel, to detail his vision for the club and he’s laughed at and ridiculed for the plan that he created. Then, 10 years later he looks like a genius because Richmond has pulled it off.”

“Everyone thinks, ‘If Richmond did that and that was pretty ambitious, we’re going to do the same thing’. Everyone copies everyone. Do it your own way and keep these things in-house. There is only one thing these plans do. They come back to haunt you. What is there to gain (by going public)?”

“I like Port Adelaide saying, ‘This is what we stand for’ – as they have with their ‘We Exist To Win Premierships’ mantra,” Killey responded. “I like clubs that declare their standards. But I don’t like strategies that can be quickly pulled apart because you have failed to meet a defined target.”

Blueprints and strategies – with clearly defined premiership targets – can become burdens with heavy expectations (as will be noted at Port Adelaide during the next three years). They also carrying the prospect of becoming mocked as no more than marketing gimmicks.

Like Port Adelaide, Fremantle works in a two-team city under the shadow of a bigger hometown rival that has delivered more AFL premiership success.

“People will think,” says Fremantle chief executive Simon Garlick, “that we just grabbed some key performance indicators like premierships, membership and attendances, or took our goals and aspirations from thin air.”

“But we came up with our strategy after a thorough and pretty exhaustive process that took more than six months. We actually drilled down across the entire organisation and had input from everyone – even some of our members. We know pressure will come with putting all our cards on the table. But we’d much rather this approach as opposed to keeping the club strategy and plan internal and safely from public view.”

At Richmond, former player and current chief executive Brendon Gale recalls how his club worked harder, rather than buckle under the pressure of expectation, when the burden of living up to the promise of winning three flags by 2020 seemed to become the starting point for every joke about the Richmond Football Club.

If it was not Richmond as the game’s punching bag, it was the ever-failing Carlton for the club’s much-mocked “They Know We’re Coming” campaign.

“It started with a vision. Our’s was to be the best on the field, and off the field,” Gale said. “We are not here just to compete (or to make up the numbers),” he adds of a club that plays in a 18-team league with no threat of relegation.

Cunningham accepts delivering on clearly defined objectives – or even the vague concept of “hope” – runs a heavy risk with fans in a league that has just one winner each season.

“People will come back with, ‘You gave me hope, but I don’t see it anymore’. That’s part of the deal,” Cunningham said. “At 0-4, there will be many Port Adelaide fans feeling that way.”

And where is Cunningham’s enthusiasm with Port Adelaide today?”

I have not lost hope,” he says.