In the 60 seconds before the first bounce of every home AFL game at Adelaide Oval the Port Adelaide fans sing their anthem. Taken from the INXS hit song, the key line is: And they could never, ever tear us apart.

Introduced as a pre-game ritual in 2014 when the Port Adelaide Football Club moved its AFL matches from Football Park to the redeveloped Adelaide Oval, the theme was based on warning “the barbarians” to never again pull apart their club.

It is a clever marketing concept built on galvanising the previously divided Port Adelaide fans. They had spent decades fighting the SANFL and its constituent clubs – the ones who went to the Supreme Court in 1990 to stop Port Adelaide’s ambitious bid to enter the AFL; then demanded separation between the Port Adelaide SANFL (Magpies) and AFL (Power) once the club had its national league licence in 1997 and supposedly always favoured the Crows, to the point of painting the bins at Football Park in the Crows tricolours of red, gold and blue.

It is true to everything that Port Adelaide emphasises in the “them versus us” mantra forged by club patriarch Fos Williams during the 1950s while building a dynasty that was equally admired and despised for its repetitive success.

The reality of the near-collapse of the Port Adelaide Football Club during the so-called dark chapter of 2010-2012 is that the greatest damage was being done from within – not by external forces.

The storyline of Port Adelaide tearing itself apart from within could possibly repeat from the fall-out of Saturday night’s 71-point loss to the underdog Western Bulldogs in the AFL preliminary final at the Adelaide Oval. On the old scoreboard, Port Adelaide put up its slogan: “The Future Is Ours”.

That is provided they don’t tear themselves apart in the present by repeating the past.

The 71-point margin on that scoreboard marks the biggest defeat since the record 119-point thrashing from Geelong at the MCG in the 2007 AFL grand final. Port Adelaide tore itself apart after that on-field disaster. 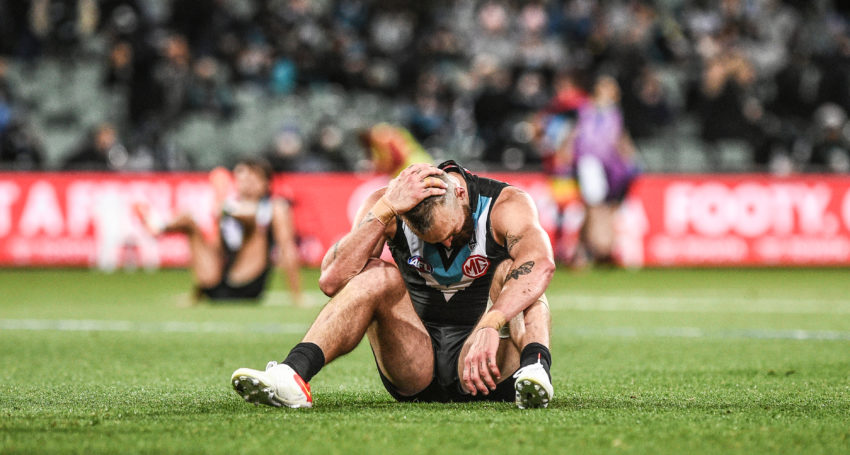 Premiership coach Mark Williams came to lament not taking up a five-year, $5 million offer to succeed his much-admired mentor Kevin Sheedy at Essendon and live his dream of coaching a “big Victorian club”, just as he had done as a player when he moved from Port Adelaide to become Collingwood captain during the 1980s.

Players turned on each other in what became known as the “blame game” at Alberton, after a serious and meaningful review of the 2007 grand final loss was ignored. The attitude at Alberton was: “Bad day to finish a good year”.

Such denial created a damaging wound. It never healed and by 2010 forced one of the club’s greatest talents, Shaun Burgoyne, to move to Hawthorn where he won three flags and reached his 400-game milestone.

Nominated by Williams to be captain – a vote supposedly not supported by much of the player group and ultimately rejected by the board, that preferred Dom Cassisi – Burgoyne was compelled to leave Alberton.

“It seemed like there was in-house fighting over the captaincy decision,” says Burgoyne who adds he was a close friend of Cassisi and was supportive of his appointment as captain.

“There never was (infighting) … but that (saga) was played out too much for my liking. And it kept building and building to the point where I felt I needed to go somewhere else to start afresh.”

The scars that game left lasted forever. Some players still carry those scars to this day.

Burgoyne is returning to Port Adelaide on November 1 to find a team again at the crossroads; the issue now the future of coach Ken Hinkley rather than the captaincy.

When Burgoyne left for Hawthorn 12 years ago, Port Adelaide was struggling with its identity, and not because the SANFL had sent the Magpies to Ethelton, a split cleared away in November 2010 by the “One Club” campaign led publicly by premiership heroes George Fiacchi and Tim Ginever.

More damaging was the club leaders of the time turning away from Port Adelaide traditions in the search of new fans and watching the “heartland” supporters walk away, leaving tarps to be put across their empty seats at Football Park where attendances fell to less than 15,000 by late 2012.

Port Adelaide had torn itself apart – and with increasing debt, falling on the SANFL’s books while the AFL licence was under the State league’s control, the club was at risk of being wound up or rebadged as “Central Australia Power”.

History has a habit of repeating at Alberton.

Just when Port Adelaide thinks its off-field agenda is perfectly primed with entry to the AFLW, major redevelopment at Alberton Oval and a business plan that has stood up against the COVID pandemic, the preliminary final loss at the weekend could tear at the football team in the same way as the 2007 AFL grand final thrashing.

And once the team fails, the club would be vulnerable again.

“It takes me back to a horrible day in 2007,” says Kane Cornes, a member of that 2007 grand final team. “That day set us back as a football team for five to six years. We did not touch that game (during the season wash-up and exit interviews). No-one spoke about it.

“The scars that game left lasted forever. Some players still carry those scars to this day. There is the real risk of sending the club sideways if they do not address it in full and ask what went wrong (last week).”

Williams was left to regret staying at Port Adelaide after 2007.

Many Port Adelaide fans , along with influential Alberton powerbrokers including former board members, say they will regret keeping current coach Ken Hinkley. He is on contract for the 2022 and 2023 AFL seasons.

If Hinkley – who dubbed himself the “right man standing” when he took over a torn-apart club in October 2012 – sees out this contract, he will have 11 seasons at Port Adelaide. 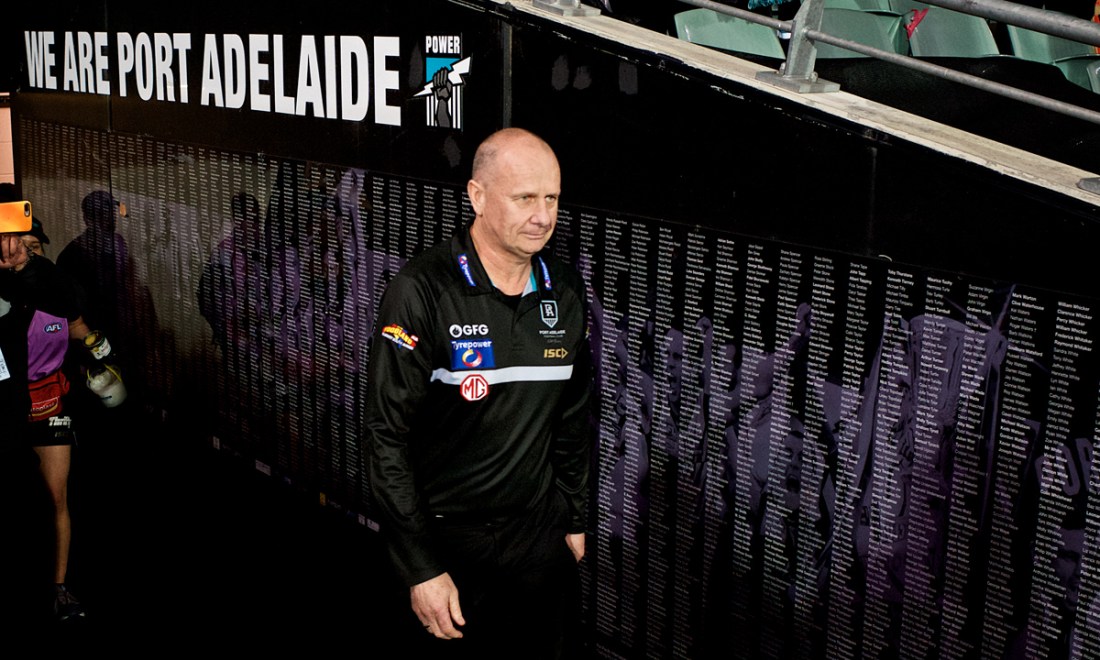 “I have been here a long time … some say too long,” Hinkley pointedly dropped into his post-match press conference after the qualifying final win against Geelong last month.

“I just find it really hard for Ken to go beyond next year,” says Cornes. “It’s going to have to be a grand final appearance or he probably will lose his job.”

For context, Port Adelaide’s leaders might look at Collingwood when Malthouse – like Hinkley – took over a broken club at the end of 1999. It took Malthouse 11 seasons and much heartbreak along the way to end a premiership drought at Collingwood.

Malthouse went 16 years between his second flag (with West Coast) and his third premiership as a coach (at Collingwood).

Collingwood president Eddie McGuire – until he feared losing Buckley to North Melbourne – held firm on Malthouse. Port Adelaide president David Koch today faces the same test of nerve overcome by McGuire when many questioned if Malthouse could win a premiership again after falling repeatedly short of the prize.

Former Port Adelaide chief executive Keith Thomas told InDaily earlier this year that he, Koch and Hinkley looked at Geelong’s steady hand in 2006 when eventual premiership coach Mark Thompson was under fire from the fans and media.

“Every time the pressure builds I think back to those meetings Ken, (club president) David (Koch) and I would have, particularly during 2015-16,” Thomas said. “We would lean on the line used at Geelong when they were about to end their 44-year premiership drought in 2007: ‘Stay the course’.

“It takes time to build a powerhouse in a demanding competition like the AFL.”

Today, it falls on first-year chief executive Matthew Richardson to stop Port Adelaide from tearing itself apart from within. He is well experienced in handling a frustrated membership: he was the front-man of the Port Adelaide executive charged with the difficult membership portfolio during the unsettled years from 2010-2012.

Richardson charged up expectations at Alberton on succeeding Thomas with his “Chasing Greatness” agenda – three premierships in five years. Now it is three flags in the next four years, just as Richmond achieved after standing firm with coach Damien Hardwick at the end of 2016 when the board shook off a rebel group.

“Chasing Greatness was never going to be easy,” Richardson said this week.

Koch is most unlikely to find his board under attack, as unfolded at Richmond. But he will be reminded by an agitated fan base that Port Adelaide – by the creed left by Fos Williams in 1962 – does not tolerate failure.

Hinkley already has defied the long-standing trend at Alberton of senior coaches being sacked if they missed finals in consecutive seasons. But now there is the spectre of turning back the clock to seek premiership success, as has been done twice before at Port Adelaide.

Premiership coach Geof Motley lost his job after losing the 1960 and 1961 SANFL preliminary final, to allow Port Adelaide to usher back Fos Williams who immediately won a premiership in his second coming. History repeated when John Cahill returned in 1988 to replace club great Russell Ebert.

Mark Williams, despite being out of a senior AFL job for more than a decade, will not be short of admirers at Alberton.

In contrast to his emotional outburst at a members’ gathering after the elimination final loss to West Coast in double extra-time, Koch has been more controlled with his statements since the crash to the Western Bulldogs – a result he labelled as “devastating” and “embarrassing”.

“My job,” said Koch, “is to get through the emotion without making any decisions at all and look at the facts.”

The external analysts – those with no emotional attachment to Port Adelaide – all hit on the same point: Port Adelaide’s list, despite winning the minor premiership last year and scoring 17 wins in 22 home-and-away matches this season, is short in the midfield. It also lacks a second go-to key forward to ease the pressure and predictability around All-Australian key forward Charlie Dixon, who has developed a strange habit of competing for marks with just one arm.

Port Adelaide’s midfield this season missed the experience and strength of former Brisbane captain Tom Rockliff, who retired after developing blood clots while recuperating from surgery after injuring both knees in an SANFL match.

Lyon says: “Clearly, the Port Adelaide midfield is light on. The hope was Connor Rozee, Xavier Duursma and Zak Butters would push in there (in a year when this trio endured injury).”

The same view is held by former Adelaide and Collingwood recruiting master Matthew Rendell who argues: “Port Adelaide is one gun short in the midfield and too reliant on Ollie Wines and Travis Boak. It also needs tougher players in attack and defence.”

Port Adelaide stood firm in 2003 when its richest supporter, the late Allan Scott, declared the club would never win a premiership under Mark Williams. A year later, pulling at his tie to mock the “chokers” tag, Williams collected the premiership trophy at the MCG declaring: “Allan Scott, you were wrong.”

Hinkley is under the same pressure Williams overcame in 2004 with strong support from then club chief executive Brian Cunningham and assistant coach Phil Walsh.

Just three years after that breakthrough AFL premiership, the Port Adelaide Football Club started to tear itself apart. A club that lives off its rich history is at risk of reliving that dark chapter … and proving the insiders can do a better job of tearing Port Adelaide apart than the barbarians at the gate.