Next weekend, for the first time, Crows and Port Adelaide supporters will be able to see the full merit of their AFL squads at the one place at the same time.

AFL Showdown XLIX will be preceded by an SANFL Showdown at Adelaide Oval on Saturday, May 8.

It is a throwback to the old days of football with the reserves before the league – and the chance to see how the future might unfold.

As the rebuild continues at Adelaide, Crows fans can assess just how well recruiting manager Hamish Ogilvie did in December with the richest cache of AFL draft picks in the club’s 30-year story. Riley Thilthorpe’s record-breaking five-goal AFL debut against Hawthorn at Launceston on Sunday certainly has reassured Adelaide supporters that Ogilvie made the right call with the club’s earliest call at any draft. 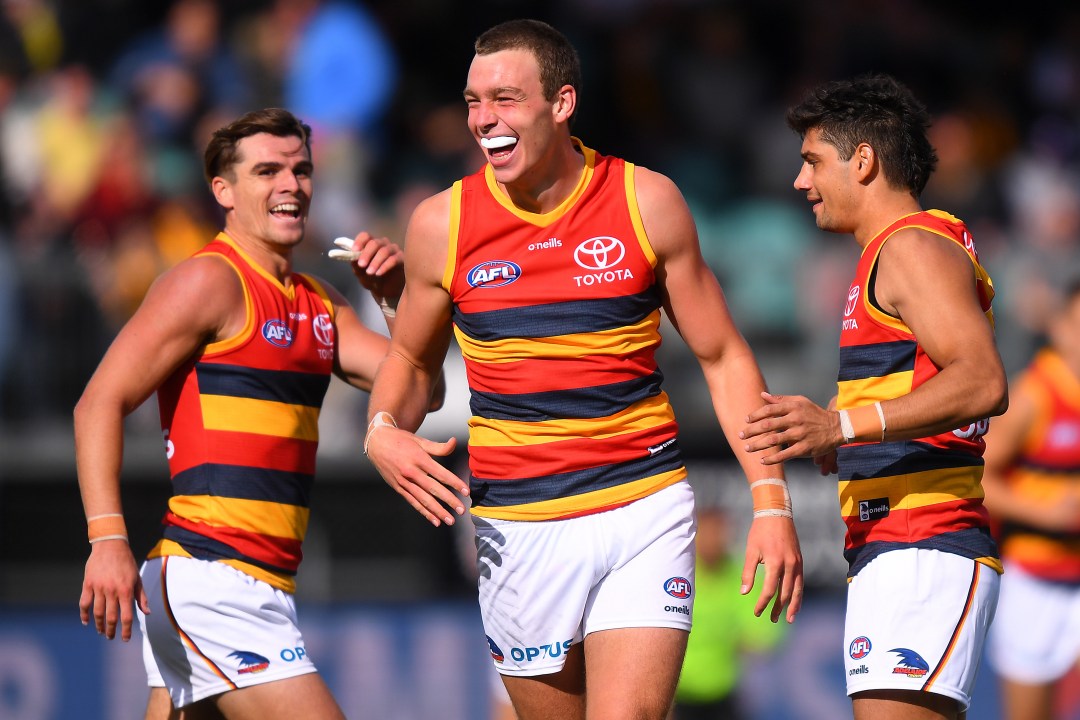 Port Adelaide supporters can see just how deep Ken Hinkley’s squad does run to cope with the injuries that have recently sidelined tyros Xavier Duursma, Zak Butters and Lachie Jones with surgery. If there is to be sustained success at Alberton – to meet the “Chasing Greatness” aim of three AFL premierships in the next five years – youth must rise.

The results of this double derby will fuel much debate on critical list-management decisions at both clubs, and might shape some big plays in October’s trade market.

More than a casual observer will be former Crows recruiting manager James Fantasia.

“We are all noting the formula used by successful clubs – a cluster of draft picks, three inside the top 20,” said Fantasia, who also took charge of the football programs at Melbourne-based AFL clubs Hawthorn and the Western Bulldogs.

“To get those draft picks you have to go to a painful place – either to the bottom of the AFL ladder or by giving up quality players,” he adds. Adelaide went down the bottoming-out path, and Port Adelaide has traded away stars such as All-Australian and club champion Chad Wingard and first-round draftee Jared Polec to secure valued early draft calls.

“It is such a costly process that you just have to get your draft picks right. You can’t afford to go wrong in this space. And there is no doubt Adelaide has made some mistakes with early draft picks recently,” concludes Fantasia, questioning the 2018 calls for small options Chayce Jones and Ned McHenry.

So how do Adelaide and Port Adelaide compare with top-30 picks in the past five AFL national drafts? 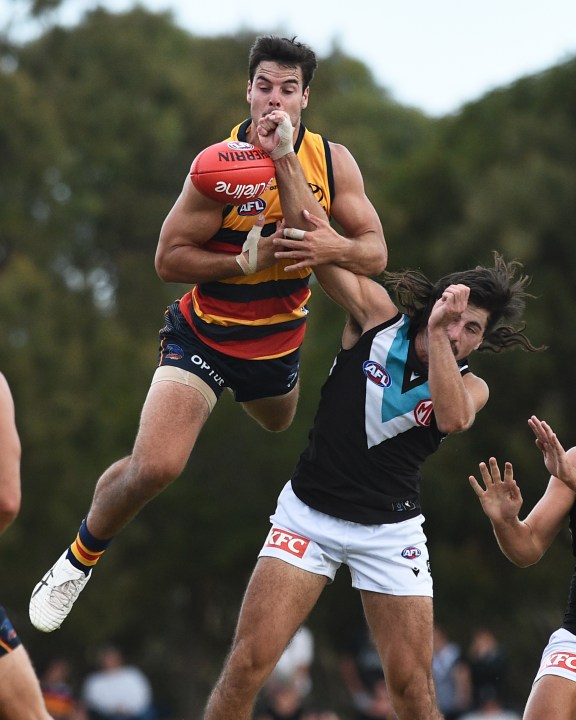 Such lists always bring out the armchair draft experts working with the benefit of hindsight. The classic example is Adelaide choosing small midfielder Chayce Jones at No. 9 in 2018 when Port Adelaide claimed hard-running midfielder Xavier Duursma at No. 18. But the Crows were not alone in rating Jones ahead of Duursma.

Crows premiership coach Malcolm Blight last week noted: “(High) draft picks mean nothing. The Sherrin (football) doesn’t know what number you were drafted. What matters is being drafted and what you do after that.”

The point might be made again and again at Adelaide. With pick No. 67 in 2000 it gained a club hero of 227 AFL games in defender Graham Johncock – and at No. 64 in 2018 claimed midfielder Lachie Sholl, a Rising Star nominee last season and this year.

Port Adelaide on Anzac Day had a rookie-listed 20-year-old – South Sudanese defender Marty Frederick – look very much at ease in AFL football as he collected 23 disposals against St Kilda in his big league debut at Adelaide Oval.

“We develop our players really well,” said Hinkley to make a point.

Fantasia counters Blight’s devaluing of draft calls by noting the eagerness AFL clubs have shown recently to get a parcel of three of four top-30 picks, as Port Adelaide did in 2018 when it recruited the grand trio of Connor Rozee, Zak Butters and Xavier Duursma. 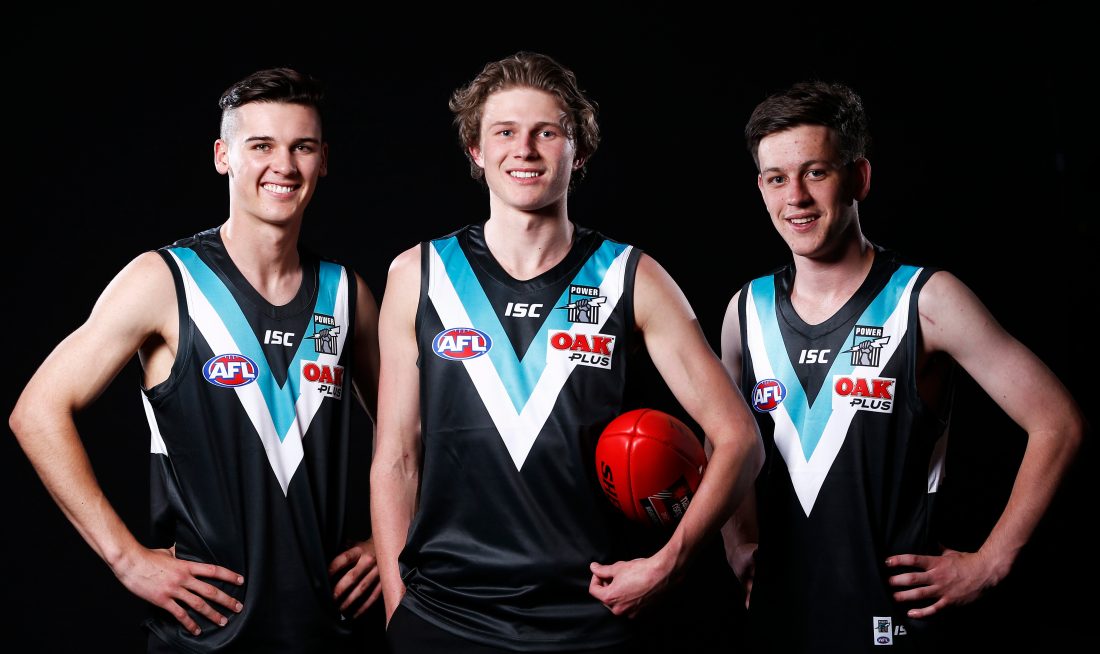 “That is the classic example of how a club engineers with clever trading to get three picks inside the top 20 and picks well,” Fantasia says of the work done by Port Adelaide list manager Jason Cripps and recruiting manager Geoff Parker.

Blight’s point is relevant to emphasise it is not just about smart recruiting. An AFL club also needs a strong development program to ensure the top draftees fulfil their potential.

“Carlton,” says Fantasia, “has had many early draft picks. But what is the culture those draftees enter? Geelong, arguably, has the best leadership group in the league. Young players enter that team knowing they have to live up to certain standards.

“The simple formula for sustained success is find the best talent, put those young players into a strong development program and surround them with good leaders. That is what defines a strong culture at a successful football club.”

Alan Stewart, the successful recruiting chief who built a premiership squad for coach Mark Williams at Port Adelaide and a consistent finalist for Neil Craig at the Crows, has much hard-earned wisdom to understand recruiting and development go hand-in-hand to define a football program.

On recruiting, Stewart told InDaily: “If you do your job as a recruiter, you can pick up some mighty fine players at the back end of the draft. But that requires you to have a proven system for identifying talent – building up profiles on potential draftees based on their talent, character, competitiveness, their eagerness for a contest. You take out the guesswork.

“And you should get that right with your first-round picks. They should be 200-game players.”

So what makes a top-30 draftee in Stewart’s book?

“There are three tests for me,” said Stewart.

“One, the player cannot fumble. If he takes the ball cleanly, he has more time to work on the strategy of the game.

“Two, he must be a very good decision maker. He must have the skill to give the ball cleanly to a team-mate so you can advance the play down the field.

“Three, he must have a good kick and handball. The AFL game does not give you the luxury of time to be correcting your mistakes with basic skills.

“That’s how I came up with my starting list for recruiting players for years and years.

He must compete – you can’t put that competitive spirit into someone; he either has it or does not.

“And his character must be ‘team first’. Australian football is such a demanding game when you put 18 players on the field for each team. So many different permutations unfold. Assessing the character of a draftee to know how he will fit in a team system is a critical call in drafting.”

Once drafted, a player’s destiny might well be determined by the AFL club he enters.

“Success is a two-pronged theme; there is recruiting and the development program is paramount,” said Stewart. “And that development does not end when you have reached 50, 100 or 200 games. Neil Craig would constantly send players back to me to talk through the fundamentals. The best players never stop learning.

“The success of a draftee can sometimes be answered by asking, ‘What environment is he entering?’ Under Neil Craig, we put those draftees into drills where they developed their skills so that they could use those skills under pressure.

“Today, we have teenagers who – to use a racing parlance – are maidens being asked to work against Group 1 thoroughbreds. It is so difficult. Not many players jump into the AFL system and immediately succeed. It is a massive jump.

“In the old SANFL days of the 1980s we watched Craig Bradley and Stephen Kernahan build up their game by playing 100 senior matches here before they walked straight into the Carlton team in the VFL. It was a great platform from which to time you move to Melbourne (in the pre-AFL national era that began in 1987).”

Timing is just as critical in chasing top-30 draft picks.

“Adelaide,” says Fantasia, “bottomed out for the first time at the worst time.”

The Crows claimed their first wooden spoon last season, when the recruiting landscape was confused by so many potential Victorian teenagers denied football games by the COVID lockdown of leagues in the draft cradle. The AFL-demanded cut in football department spending also challenged Adelaide in building the development program to fast-track the draftees being called to West Lakes.

In this space, Adelaide did score a major win by luring Central District SANFL premiership winner Marco Bello from AFL rival Hawthorn to be its new head of development.

Armed with seven years of hard-earned knowledge from the Victorian under-18 system and the Hawthorn VFL program at Box Hill and the club’s AFL academy, Bello could be described as the most important man for Adelaide list manager Justin Reid and recruiting boss Hamish Ogilvie while their draft strategy draws more and more attention.

Bello reinforces Fantasia’s point that recruiting and development needs to be backed up a strong culture driven by the team leaders.

“That was highlighted at Hawthorn (with leadership from Luke Hodge, Sam Mitchell and Jordan Lewis),” said Bello. “And at the Crows we have 22 guys who are being provided a lot of feedback by our team leaders in Rory Sloane, Taylor Walker, Matt Crouch and Daniel Talia.

“And in that void (created by the loss of experienced players) we have Tom Doedee, Brodie Smith and Luke Brown stepping up as a conduit between the younger and older players. What I have noticed with our younger players is they are not taking a back seat; they are wanting to establish themselves as leaders and drive the culture.”

Bello concedes Adelaide is needing to make more from less amid the COVID-enforced cuts to football department spending.

“What I have seen in the first six months is no deficiency in the resources we can provide the players,” Bello said. “We have a holistic approach with development. Yes, they are there to be footballers. We provide them with the tactical and technical (information needed to be) professional footballers.

“But we also deal with off-field and lifestyle, and that part is more difficult to monitor (amid the COVID cuts).”

Next weekend, Adelaide Oval will reveal much more than where Port Adelaide and the Crows stand in this year’s AFL premiership race. The double derby will allow everyone to see which club not only has made the wiser draft picks in recent years, but which club is better at developing talent.