Michael Coxon walks the blocks around Thebarton Oval every night as a local resident rather than the robed West Torrens mayor – and says he hears a very clear message about the Crows being invited to consider it a new home.

“There is not one resident who is against it,” says Coxon, whose determined campaign to lure the club to Thebarton is likened by his Ashley St neighbours to radio legend Bob Francis’ campaign to bring the Beatles to Adelaide in the 1960s. 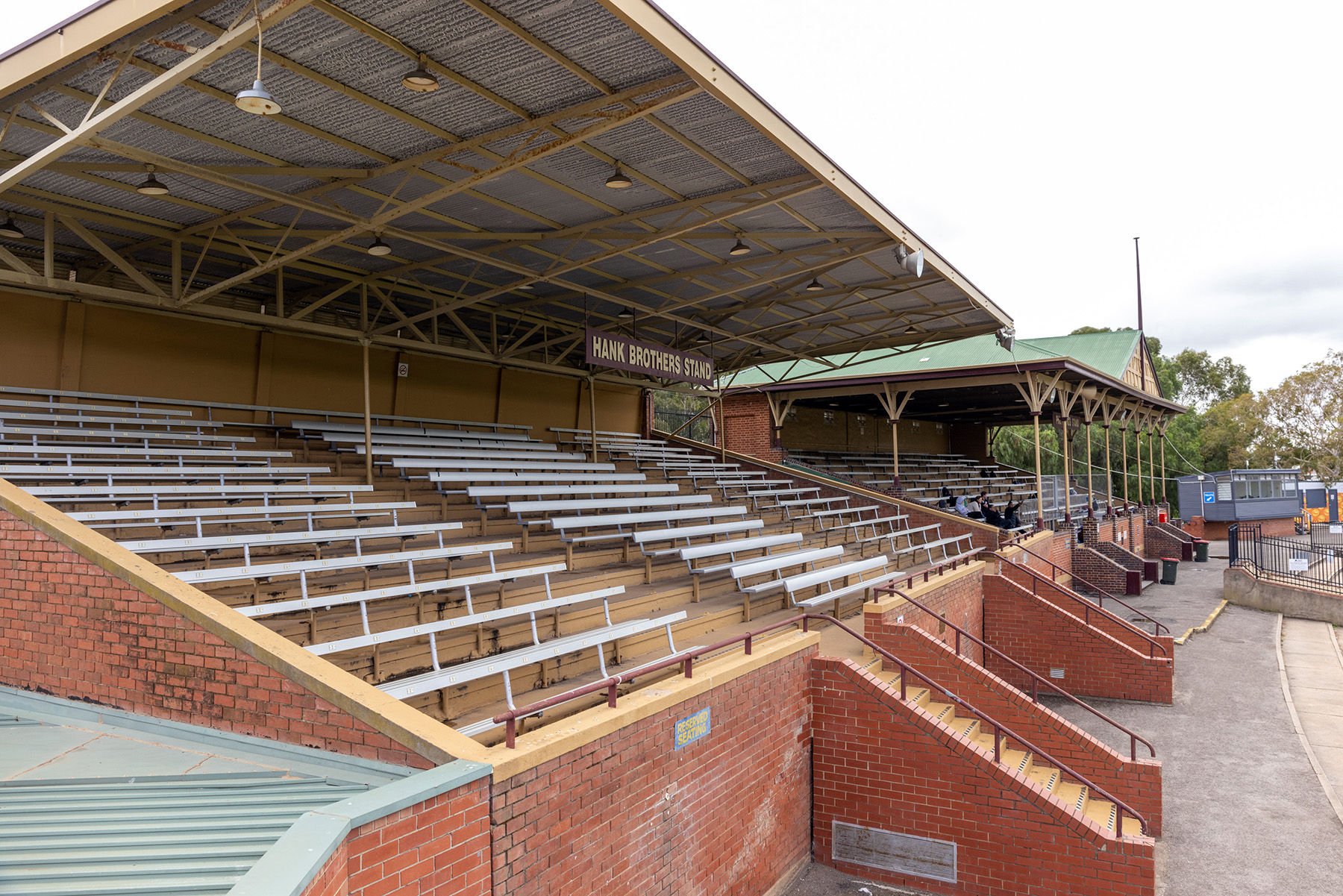 But Coxon expects the sentiment might change in the next month, whenever he steps deeper into the council district to measure the response to the Adelaide Football Club’s move from West Lakes to Thebarton being confirmed and detailed as the Crows’ best (and possibly only) option for a new home.

Coxon need only note the residents’ protest 10 kilometres away at Alberton Oval, where Port Adelaide-Enfield mayor Claire Boan is no less bullish about backing an AFL club against dissenting ratepayers.

“I have no problem walking the streets of Alberton and I do so multiple days of the week,” said Boan. “The majority of the residents are quite supportive (of the Port Adelaide Football Club’s plans for the oval).”

Both mayors are eager advocates of bringing or keeping AFL profiles within their local communities – even if this strong alignment to SA’s two AFL clubs risks some heartburn during their re-election campaigns in the next 12 months.

“I don’t count votes when it comes to making decisions I feel will deliver a good community outcome,” says Boan. “My philosophy is, make the right decisions at the right time.”

Coxon says he once told SA Premier Steve Marshall, during a discussion about Coxon’s ambitious agenda for the inner western suburbs and the Henley Beach Rd strip close to the Thebaron Oval – that he was in local politics “for a good time, not a long time”.

“I might have some pushback (from delivering the Crows to Thebarton) when I seek re-election next year,” he said.

But in the years to come, people will realise this is a good decision for the people in the City of West Torrens council area.

Boan – with her understanding about what an AFL club brings to a suburban area – and Coxon, with his eagerness to gain the same profile for his community, are surprised the Adelaide City Council blocked the Crows from setting up in the park lands at North Adelaide.

“The Adelaide City Council has missed out on a terrific opportunity,” said Boan.

“But it is not my position to question the Adelaide City Council. My task is to improve the lives of the residents of the City of West Torrens.”

When the Adelaide Football Club’s $60 million plan to redevelop the ACC’s Aquatic Centre was derailed by concerns for cost blowouts during the belt-tightening imposed by the COVID pandemic, along with park lands campaigners protesting the development, Coxon picked up a map of Adelaide, his ruler and his mobile phone.

Thebarton Oval is only minutes from the CBD. Photo: Tony Lewis/InDaily

Coxon was referring to his negotiations with Olsen as SANFL president to have the State football league call Thebarton Oval home. This required the lease at the oval – the home of SANFL club West Torrens until its move to Woodville Oval in 1991 – to be reassigned from the amateur Adelaide Footy League to the semi-professional SANFL.

The next step is to add the professional Adelaide Football Club to the mix.

It has $15 million from a federal government grant to put towards its $60 million budget for a new headquarters. The balance will be found from state and local government grants, AFL support and the sale of its $21 million West Lakes base, along with bank loans.

Boan is dealing with a similar vision.

Alberton Oval became the Port Adelaide Football Club’s home in 1880, after the club had spent its first decade at Glanville. Redevelopment plans proposed by the AFL club are costed at $23 million, with funding being chased from federal and State governments and the AFL.

Like a redeveloped Thebarton Oval, there would be AFLW games at Alberton Oval once Port Adelaide secures a national women’s league licence, most probably in 2023.

Port Adelaide’s redevelopment plans are detailed and costed – and drawing flak from some residents along the oval’s eastern flank.

“Some residents are upset with the first plans, so the Port Adelaide Football Club is going back to the drawing board to deal with those concerns,” Boan told InDaily. “The club wants to be part of the community; they are recognising the need to deal with the environmental impact of their plans. They have taken that feedback on board.”

Alberton residents have launched legal challenges and social media campaigns and hit council with protests, with particular concern about a potential fall in property values arising from more car traffic around the oval.

One homeowner, living “within 500 metres of the oval” and wanting only to be known as Stuart, has written to local planning authorities, declaring: “I moved to Alberton because of the old world charm and the area’s proud history. Basketball and soccer fields do not belong here. There is so much empty space in Port Adelaide town area; why would the local council accept this proposal. It will be at the expense of local residents’ quality of life.”

Port Adelaide Football Club chief executive Matthew Richardson responds: “The (redevelopment) precinct is designed to be a community facility and opening up the precinct to junior sport in the district is an important feature. Junior basketball and soccer facilities are an important requirement for the local community.”

The Adelaide Football Club has a conceptual plan for Thebarton Oval that Coxon describes as “absolutely breathtaking”.

Thebarton Oval was established in 1922, drawing the West Torrens Football Club from nearby Hindmarsh. The SANFL, which was based at Football Park until the redevelopment of Adelaide Oval in 2014, has collected $17 million from federal, State and local authorities for an $18 million redevelopment program that will make Thebarton Oval its administrative and training base.

The Crows’ $60 million plan would position the club on the oval’s eastern flank, alongside an expanded South Road with its tunnel at Thebarton Oval.

The oval would be realigned to run true north-south, to mirror Adelaide Oval. The playing field also would have the capacity to be reconfigured to match the shape and dimensions of every other ground used for AFL matches.

There are still questions about how the $9 million Thebarton Community Centre survives the South Road tunnel dig – and whether the Crows, who want two training grounds, will have clear access to Kings Reserve at Thebarton Oval’s northern end.

This area is expected to be seconded by the Department of Planning, Transport and Infrastructure for at least five years from 2025 for use as a depot and parking lot for the equipment used on the North-South corridor work on South Road.

“It is like a chess board at the moment – moving pieces all the time,” Coxon said of his battle to align multiple agendas at Thebarton Oval. “We’re still not sure what chunk of the oval precinct will be taken for South Road’s realignment and expansion. Engineers are still working through their plans.”

The Adelaide Football Club would move from one construction zone around Football Park at West Lakes to another on South Road at Thebarton.

But both Coxon and Olsen are adamant Thebarton Oval must remain open to the local community.

“No way, no way,” says Coxon of the prospect of high fences and locked gates closing off Thebarton Oval from the public and local residents when the  Crows want to have secret tactical training sessions for any of its AFL, AFLW and SANFL teams.

“Thebarton Oval will remain open. John Olsen insists there must be community engagement from his club. There is no way they are closing up Thebarton Oval.”

At the Crows members’ meeting at Adelaide Oval in early March, hours after being rebuffed by the Adelaide City Council, Olsen spoke enthusiastically of co-existing at Thebarton Oval with the SANFL and community driven Adelaide Footy League. He embraced the vision of Thebarton being the meeting point of all levels of South Australian football.

Coxon also knows his grand plan for Thebarton Oval is delicately placed. He is eager to close a deal with the Adelaide Football Club at Thebarton Oval amid speculation the Crows are negotiating to build their headquarters on the old Coca-Cola site at Port Road, Thebarton with a developer offering a footbridge to two training grounds (with no infrastructure) on the adjacent parklands.

The other undisclosed (rather than “mystery”) park lands site is said to be the Lutheran Sports Club grounds on the corner of South and West terraces, where the Adelaide City Council will not approve major construction projects for a commercial enterprise such as an AFL club.

Why are the mayors at Port Adelaide-Enfield and West Torrens – by contrast to the Adelaide City Council – so eager to embrace AFL clubs?

“They bring business, excitement and enthusiasm – it is in our residents’ better interests,” said Coxon. “There is a social, economic and mental health benefit to bring the Crows into our council area. It is quite significant – and I am sure the majority of our ratepayers are excited by the prospects.”

“When I recently saw the club documentary (“This Is Port Adelaide”) to celebrate their 150th anniversary I was staggered by what the Port Adelaide Football Club means to the local community. I also love how so many former Port Adelaide players remain part of the community by living on the LeFevre peninsula.”

Club and council have not always been strongly aligned. Constant battles over leases and conditions of use at Alberton Oval starting in the 1920s ultimately had the Port Adelaide Football Club locked out of its traditional home in 1975 and 1976.

“Our relationship today is built out of respect,” says Boan. “We respect what the Port Adelaide Football Club offers in bringing a national profile to our district by playing in the AFL. And the football club respects the local community by giving back to the district, either by wanting to engage with the community, particularly in the schools, or by working with local sporting clubs.

“AFL clubs understand they have a responsibility to play a positive role in their local communities. If they are prepared to step into this space, we (as local councils) should be supporting the clubs to do the same.”