Tony Wines last passed through the turnstiles to see his son play an AFL game when Ollie was co-captain at Port Adelaide – in 2019.

Trapped behind locked borders in Victoria last season, Tony Wines did not get to any AFL matches last season and was not among the family members of Port Adelaide players who gained those contentious exemptions from SA Health to travel to Adelaide during last year’s final series.

“I was going to the grannie (the AFL grand final in Brisbane) if they made it,” said Wines. Port Adelaide fell short, losing the preliminary final at Adelaide Oval to eventual premier Richmond.

Wines’ torment at being locked out of AFL games – one known by every Victorian football fan last year and those South Australians who could not get their hands on the limited tickets to Adelaide Oval last season – ends on Sunday. Sort of.

Port Adelaide returns to Melbourne for its first AFL game in Victoria since August 17, 2019. The venue – the indoor Docklands Stadium – is the same. So is the opponent, North Melbourne.

But capacity has been cut in half, to 28,961 seats, to meet the COVID safety protocols.

“I’ll find a ticket,” says the enterprising Wines, who is an AFL member, a Port Adelaide Football Club member and has a son who in normal times is handed guest passes for family and friends.

January 1, with the champagne corks blasting the memories of a tough 2020 into the history books, did not clear away all the complications the COVID pandemic brings to sport, let alone life.

“I was one of those dreamers,” says Peter Kauschke, president of the Adelaide Crows Supporter Group, of the optimism he took into the new year.

On Saturday, Kauschke and the Crows cheer squad will return to Adelaide Oval for their club’s AFL premiership-season opener against Geelong. Already this is a win after they – and every other fan – were locked out of the Oval during the Round 1 clash with Sydney last season.

But not everything is back to normal. Far from it in many ways. Fans will have to wear masks on entering the stadium and keep them on their faces until they take their seats. This is an opportunity the two AFL clubs have not missed by adding reusable masks to their merchandise stock.

Some of the grand traditions of Australian football will be missing.

There will no run-through banner.

“We, as cheer squads across the league, have written to the AFL asking if we can bring back the banners,” said Kauschke. “The league has come back with six or seven questions: what is the minimum number of cheer squad members needed on the ground to hold the banner, what is the banner made of, how much time would we spend in the players’ race before we go onto the field, are we prepared to take a COVID test each week?

“I understand they want to make the ground a COVID-safe place. But I was surprised that the Melbourne Storm had a banner last week (for the NRL rugby league season-opener against South Sydney in Melbourne).”

“And being chosen to carry that banner onto the field at AFL grounds is another great moment for members of the cheer squads… we miss out again this year,” Wilson said.

Liam Briggs has been part of Port Adelaide’s cheer squad for 20 years and is devoted to the tradition of ensuring the run-through banner carries a meaningful and inspiring message. His last banner was for Port Adelaide’s season-closing match against Fremantle at Adelaide Oval on August 25, 2019.

“And from February (2020) we started building the backgrounds for our banners for 2020,” said Briggs, the banner co-ordinator for the Port Adelaide cheer squad. “In March (2020) all those plans were shot down.

“But we had to do something. We had to be able to acknowledge player milestones and great achievements. I went to the club suggesting virtual banners that appeared on social media. We will continue to do that in 2021.”

At the “top of Port Road” – the well-worn path for Port Adelaide fans going to Adelaide Oval – is a giant electronic billboard that shows an image of Power players celebrating with their fans along the Oval’s boundary fence. The club’s promotional message to sell tickets is: “We’re Back. Together.” 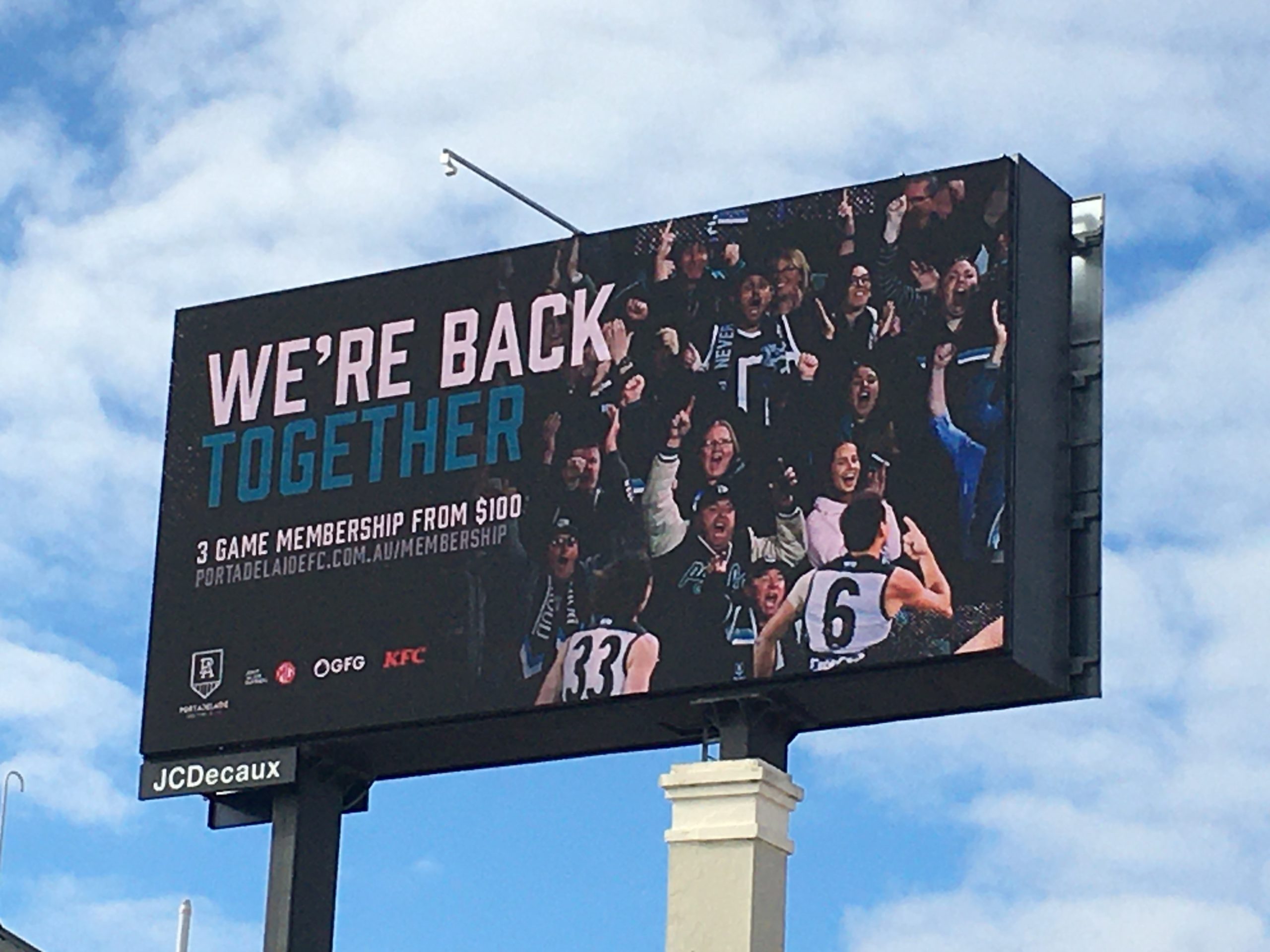 Fans who have become “rusted on” to their seats while cheering together for decades at AFL games in Adelaide –  at Football Park from 1991 with the inception of the Crows and since 2014 with the move to Adelaide Oval – are being separated.

Families are being split. A computer at AFL House in Melbourne shows no sentiment when reconfiguring the seating arrangements at Adelaide Oval or any league venue.

Adelaide Oval’s seating and limited standing arrangements are dictated by SA Health protocols that limit capacity to 75 per cent (40,000 of 53,500) and put fans in “pods” of 120, with significant spacing between these pods and the standing pens on the northern mound.

Even the Crows cheer squad is separated this weekend.

Adelaide chairman John Olsen this week publicly apologised to his club membership base for delays in resolving how 4500 fans have had their seats moved, and how fans have struggled to get answers from a club office that is feeling the pinch from cutting staff by 85 during the COVID squeeze on AFL revenue.

“It’s been very difficult and challenging,” said Olsen whose club had players staff the phones on Monday to ease the tension among frustrated fans.

A crowd of just under 50,000 people welcomed back footy at the MCG last night, in the AFL’s opening round match between Richmond and Carlton. Photo: AAP/Daniel Pockett

Olsen is guaranteeing every Crows member with an 11-game membership will have entry to every home match this season.

At Port Adelaide, membership and ticketing manager Leonie Way has spent the past fortnight working seven days a week from 7am to 7.30pm to sort out the Power’s seating arrangements for the home opener against Essendon at Adelaide Oval on Saturday, March 27.

Even new Port Adelaide chief executive Matthew Richardson has had to deal with his family’s tickets being shunted from one side of the Oval to the other.

“My family’s seats in Section 337 have been affected, so this year we’ll be moving to the Western Stand, so I can assure you this is random and there are no favourites!” Richardson told his club’s members. “We hope we can return to normal as soon as possible and all get back to our favourite seats at Adelaide Oval.”

Adelaide Oval Stadium Management Authority chief executive Andrew Daniels is determined to make a day at the football feel as much like pre-COVID days for the fans regardless of the health protocols.

“We want the fans to enjoy the footy the way they remembered it was (before last year’s COVID lock-outs).”

But there are still match-day routines that cannot return to normal, including the particularly Adelaide football concept of lining up for hours at the gates to be first in line for prime boundary line seats when the Oval opens on match day.

There is no unreserved seat at the Oval this season. For the first time, every ticket dictates a seat or standing spot.

“We need to avoid crowding at the gates,” said Daniels. “We are trying to show SA Health and SAPOL (police) that we can safely bring together 40,000 people.

“We need to demonstrate we can do that safely at Adelaide Oval so that we can build confidence (with health officials) to continue relaxing the rules .”

Another fan ritual of the AFL season – the long weekend interstate with a short holiday built around a football game – is still under threat from COVID protocols.

“You don’t want to run the risk of being caught in a lockdown away from home,” said Kauschke. “People are too scared to travel.”

Briggs underlines this point. He will not be at Port Adelaide’s season-opener against North Melbourne on Sunday.

“COVID,” explains Briggs, who has not travelled to an AFL game since 2019 watching Port Adelaide play Fremantle at the billion-dollar Perth Stadium on June 15 of that season.

“It has been tough,” adds Briggs of the pandemic breaking down the habit of interstate travel among AFL fans. “Not having any bus trips to Melbourne last year was difficult for many people. Not being there to support the players was hard, particularly when we know how much it means to have the cheer squad at away games.

“We had to make the most of the opportunities at Adelaide Oval – and we will again this year.”

Ian Wilson, a member of the Port Adelaide cheer squad since 1974 when the club was an SANFL powerhouse, also will not go to Melbourne this weekend – just as he did not go interstate for any match last season.

“COVID broke my streak of going to every Port Adelaide AFL game since 2011,” Wilson said. “You can’t go while there is the risk of being stuck interstate or forced to go into 14 days of quarantine.

“And if you did want to go, you will be struggling to get a ticket while there are restrictions on venue capacity. I’d rather our Melbourne-based supporters get their hands on those limited tickets, particularly after they missed out all of last season.”

Kauschke already has cancelled the Crows cheer squad’s travel plans for Adelaide’s Round 4 clash with North Melbourne in Melbourne on Sunday, April 11. Usually, the traveling contingent ranges from 11 to 26, with 100 to 180 tickets set aside for the cheer squad that has members nationwide.

“Last year was terrible,” says Kauschke. “A lot happened behind the scenes that hit us. We could not have membership gatherings or barbecues. It was tough.”

This season is no less challenging for a cheer squad that chalked up $12,000 in debt last year while absorbing costs such as $240 a week to rent a hall for assembling banners – in particular for milestones achieved by captain Rory Sloane and former captain Taylor Walker – while they were locked out of the clubhouse by COVID protocols. Those banners remain in storage; they were not allowed to be unravelled at Adelaide Oval last season.

COVID protocols this year have locked the cheer squad out of the Magarey Room in the Oval’s Riverbank Stand where Kauschke had hoped his crew could have sold raffle tickets to clear away last year’s losses for the not-for-profit supporter group.

“I am not going to jump up and down and create waves while the club is dealing with so much just to get tickets to fans,” Kauschke said. “But you might find us at a Bunnings soon raising money with a sausage sizzle.”

For the Port Adelaide cheer squad, the prospect of being confined to Adelaide Oval and dealing with protocols on seating arrangements, ticketing and banners is even tougher during a season in which the Power is highly fancied to win its first AFL flag since 2004.

“I am sure we will make the most of the opportunities to still be involved,” says Briggs. “In these times with COVID, we will take it one game at a time. ”

Read Michelangelo Rucci every Friday during the AFL season in InDaily.