Former Adelaide United owner Greg Griffin is urging the Adelaide Football Club to not fear looking outside the “AFL bubble” again for its new chief executive – and is endorsing the man he hired at the Reds, Grant Mayer.

“Grant was instrumental in Adelaide United winning the (A-League soccer) title (in 2016) – and that is just the chief executive the Crows need today,” said Griffin, a leading Adelaide lawyer with code-hopping experience between Australian football and the world game.

“He is by far, the best candidate. I know all of the major contenders mentioned so far, Grant is the best man for the job.” 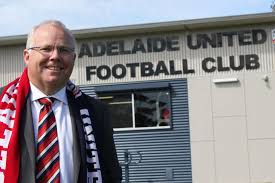 Mayer does have experience in the AFL with Greater Western Sydney with whom he was charged with managing the Giants’ commercial portfolio in their national league start-up years from 2009-2012.

Advertising for Andrew Fagan’s successor will step up today, with Adelaide-based recruiting agency Morton Phillips detailing the Crows’ criteria for the club’s fourth chief executive in the national press.

The criteria spelt out by new Adelaide chairman John Olsen emphasises AFL experience – and “knowing the South Australian market and the nuances of South Australia”.

Fagan, who resigned last Thursday, took charge late in 2014 from Canberra with no AFL experience after working primarily in Australian rugby union, both at the game’s headquarters in Sydney and with the Canberra Brumbies.

But Griffin, a well-known challenger to the Crows, is championing the case for Mayer saying: “Commercially, Grant is very astute. But he also knows football – and clearly understands the role the chief executive must play for there to be a successful football program.

“Grant is very strong on setting up the football department with the right people so that he can get on with running the club, making sure the members are looked after and it is commercially sound.”

Griffin also suggests Adelaide look to fill the two senior executive vacancies created by the recent resignations of Fagan and chief operating officer Nigel Smart by appointing Mayer and Gallagher as a tandem.

“James Gallagher would do well to come as Grant’s lieutenant in preparation to ultimately transition to the chief executive role,” Griffin said.

Adelaide’s new chief executive will be charged with two major tasks – finding and setting up the Crows’ new home away from West Lakes and leading a new management team with, as Olsen put it, “strong interpersonal skills – a great communicator; this will be really important”.

Griffin praises Mayer on both fronts.

“Grant not only secured Adelaide United’s training headquarters at Playford, he personally ensured it was a facility that brought the best out of the team – and that played a pivotal part in our championship success in 2016,” Griffin said.

“Off the pitch, he created a management team that to this day still has strong bonds.

“Grant also is great in delivering in sponsorship, as he did at Adelaide United when he signed a deal with IGA – one of the best sponsorship deals in the A-League.

“Another great impression Grant made on us at Adelaide United is how he proved he was committed to being in South Australia. He sold his house in Sydney to buy a house at Hallett Cove and then build another. He put his roots down in the South Australian community.

“He would make a great chief executive for the Crows. He is someone who has taken on the challenges the Crows face today – and succeeded. He knows the AFL and is still lauded for the deal he secured for the Giants with Skoda.”

InDaily contacted Mayer but he did not wish to comment for this article.

Adelaide was told by executive recruiting specialist Morton Phillips that it generally takes two months to fill a vacancy such as the Crows chief executive chair. Olsen wants to advance that timeline to have the new management leader in the chair at West Lakes by the start of the AFL premiership season in late March.

There were 107 applicants in 2014 when Fagan was chosen to succeed Steven Trigg as the third chief executive in the AFL club’s history. The Crows expect many more to apply this time, particularly with the COVID squeeze in the professional landscape putting many qualified contenders in the market.

Olsen told InDaily on Monday “the (new) chief executive will be leading a club where football comes first.”

“Strategy will be based on the challenges we are facing post-COVID,” added Olsen. “There is an 18-month plan to recover from the impact of COVID last year. There is the search for new facilities (with the Crows currently considering Thebarton Oval and a second near-city site for its headquarters and training base).

“There will be a football-first approach while reviewing our business enterprises. Post-COVID, we need to assess if we continue with these (in particular baseball and eSports). We will look at how these investments deliver – or if they distract us from our main focus and our core function of football.

“And the interpersonal skills of our new chief executive – being a great communicator – will be really important.”