Ryder injured his hip flexor early in the second quarter of the shock nine-point loss to Fremantle in Perth.

The Power were dominating the clearances up to that point, winning the count 20-4 in the first quarter.

But they were soundly beaten in the clearances following Ryder’s exit, with the 8.11 (59) to 7.8 (50) defeat dealing a major blow to Port Adelaide’s top-four hopes.

Scans will determine the extent of Ryder’s injury, but Power coach Ken Hinkley expects the star ruckman to miss at least two weeks.

Fifth-placed Port Adelaide (11-5) confront an in-form GWS outfit at Adelaide Oval on Sunday, before taking on the Bulldogs, Crows, Eagles, Magpies, and Bombers in a tricky end to the season.

Westhoff and Dixon teamed earlier in the year when Ryder was sidelined for five matches with an Achilles tendon injury.

The Power lost two games during that stretch, and Dixon’s increased role in the ruck affected his form.

But the ruck isn’t the only headache area for the Power following their inept display against Fremantle, with their mounting injury toll a major concern.

Star forward Robbie Gray is in doubt for the Giants clash after being knocked unconscious in a heavy tackle from Dockers defender Ryan Nyhuis.

Nyhuis, who pinned Gray’s left arm before body slamming him, is almost certain to be suspended over the incident. 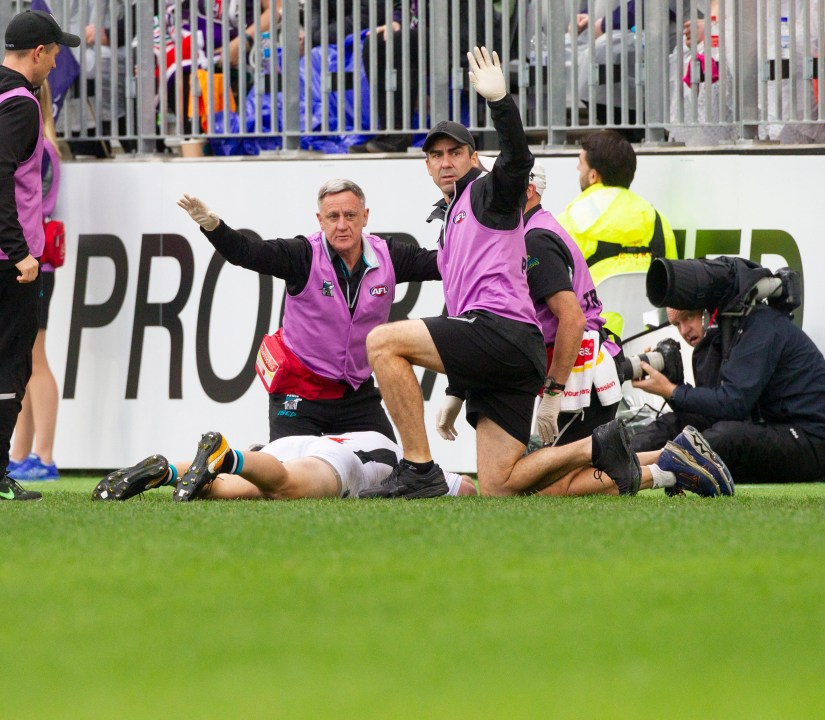 Port staff call for the stretcher after Robbie Gray was knocked out in a tackle. Photo: AAP/Tony McDonough

Defender Tom Jonas (knee) won’t return until just before the finals, while Hamish Hartlett (knee) is out for the season.

“It’s not an excuse. You’ve just got to get on with it,” Hinkley said of the growing injury count.

“Everyone in the competition has had their run with injuries.

“The Giants have had their run with injuries. Our turn is now – just get over it and get on with it.

“We’ve normally been pretty good when it comes to responding (to losses).