Sloane will soon leave hospital after emergency appendix surgery yesterday, but his finals fate will hang in the balance for another week.

“He is not considering not playing,” Pyke told reporters today.

But the Crows coach says Sloane’s status won’t be fully known until next week.

“I spoke with him this morning and he’s in good spirits and we will see how things settle down,” Pyke said.

“Expectation at the moment is he should be fine.

“To be honest it’s probably too early say with certainty.

“But the advice that I have got, and it’s only early days because he only had surgery yesterday, is we will see how he recovers and we will be guided by the medicos and Rory.

“Obviously he has got to be comfortable out of the surgery… and the advice has to be that he’s not going to be any risk by playing or preparing to play, because he will need to do some things to get ready for next Thursday night.

“We will assess all that, it’s too early to tell now though.”

“It’s probably unusual, isn’t it, you get two guys in one season having their appendix out, but that is life,” Pyke said.

“These are the things you can expect through a campaign. We will just deal with it and get ready for next Thursday night.”

“The beauty of our group is we just expect the unexpected and when it arises, we just jump the hurdle and keep going,” Walker told reporters.

“I don’t think too many clubs would have two in a year but it is what it is.”

Despite the setback, Adelaide is celebrating its fortune this week, having secured the prized signature of high-flying forward Mitch McGovern on a new three-year deal.

The 22-year-old Western Australian was due to come off contract at the end of the season and had been strongly pursued by both AFL clubs in his home state.

McGovern’s brother Jeremy is a key player at West Coast, but Fremantle’s lucrative multi-year offer was considered the major stumbling block in the Crows’ bid to re-sign the exciting forward. On the same day Sloane was hospitalised, news of McGovern’s signing was a huge pre-finals boost for the Crows, with Walker enthusing it emphasised the club’s culture.

“Obviously we have done a lot of work in keeping our group together,” Walker said.

“We have created a great culture, a great vibe around the club.

“And you have only got to listen to what Mitch said yesterday, he wanted to stay because of the foundations at the footy club.

“It’s just great for him to be able to recommit to this great footy club.”

Lever is fielding rich offers from Melbourne-based clubs but Pyke dismissed any notion of a distraction at his table-topping club.

“It’s fantastic for us to secure (Mitch) for a three-year period,” Pyke said.

“I don’t look at it whether it’s a distraction for the finals.

“I’m looking at it more in the basis we have now secured a player that we value and we wanted to keep. 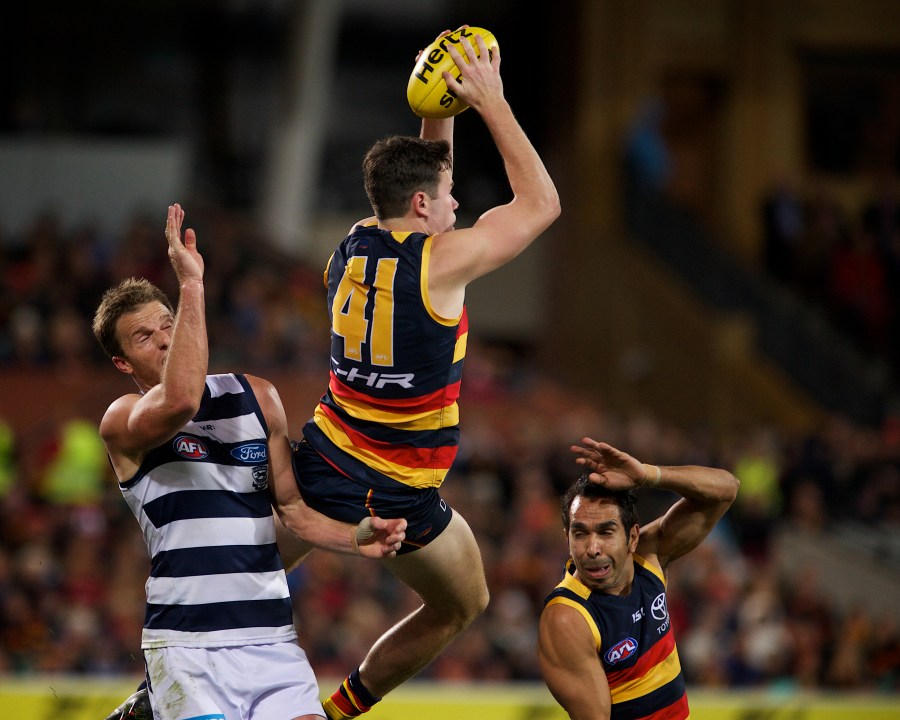 McGovern said in a statement yesterday that he “loves the playing group I’m playing with, but also the staff and everyone involved”.

“The culture is fantastic here. It’s one of the best-run clubs that I can see and I’m glad to be a part of it,” he said.

“I’m pretty excited for the future ahead.”

Can't wait for (at least!) another three more years of this! ? #weflyasone pic.twitter.com/Zm8gcckD54

McGovern was recruited with the 43rd overall pick at the 2014 national draft and had to wait until round one of the 2016 season to make his AFL debut.

In 35 AFL games since, he has established himself as a dynamic, strong-marking forward, with his last-second mark and goal in a draw against Collingwood this season a highlight.