Sydney big man Tippett is likely to face the Crows, although Sam Naismith is on the cusp of returning from injury and Tippett is no longer the automatic selection he once was.

Sam Reid’s return to fitness has settled the Swans’ forward line this year, leaving Tippett scrapping for a share of ruck duties alongside Naismith and Callum Sinclair.

Tippett is in the midst of his fifth season with Sydney but has only played 72 games for the Swans; a product of niggles, injuries and an 11-match suspension for his role in Adelaide salary cap breaches.

The 30-year-old only returned in round 20 because of Naismith’s hip injury, having been dropped after an underwhelming performance against Hawthorn in round 10.

However, if the ruck-forward is able to rediscover his game-breaking best in the next fortnight he will be a finals trump card for coach John Longmire.

There were plenty of positives signs in Sydney’s last-start shellacking of Fremantle, most notably a game-high eight tackles.

“His tackle pressure was really underrated, really important for us around the stoppages,” Swans defender Dane Rampe said.

“That’s what we have really wanted from him, since he’s come back, is to just compete.

“Really pleased to see him getting back to something near his best, and we still think he’s got a bit to go.” 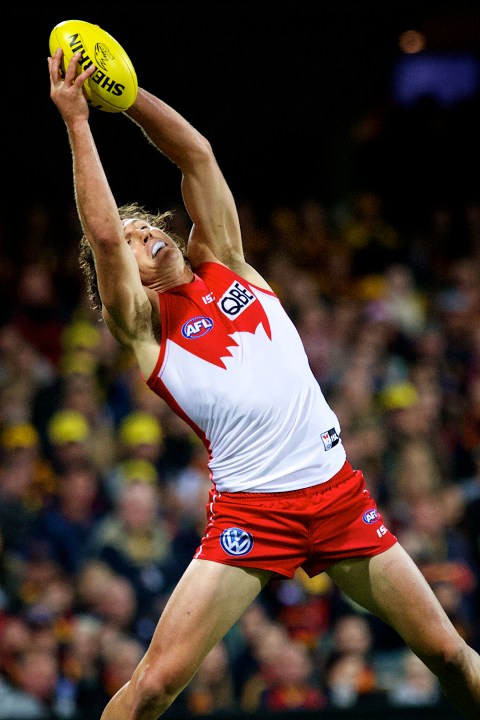 The ladder-leading Crows will provide more resistance than the Dockers. Adelaide’s Sam Jacobs is among the leading contenders for the ruckman spot in the All-Australian side and one Swans coach John Longmire is wary of.

“They haven’t got too many players that aren’t in all Australian form… but he’s certainly one of them,” Longmire said.

“Kurt has been building since he came back into the team.

“Callum’s athleticism has been really strong in the past few weeks, it’ll be a good match-up.”

The bout has been a painful wait for Don Pyke and his Crows, who still smart from their last meeting against the Swans — a semi-final six-goal loss last year.

But they haven’t yet played Sydney.

“It’s a good chance to see the areas we think we have improved on against a high-quality opponent,” Pyke said yesterday.

“That was a disappointing way to end our season last year.

“And we get a chance on Friday night… to see how far we have come.”

Pyke said the Crows’ lofty perch this season evidenced they had learnt the lessons from that semi-final defeat.

“Where we are sitting reflects that we have (come a long way),” he said.

“Some of our performances during the year and our numbers would reflect we have tightened up in defensive stuff, our contested ball stuff has been of a really high standard for pretty much the whole season.

“I have no doubt we have improved. How far, I don’t know.

“That is the unknown until you come up against quality opposition like Sydney.”

The Swans’ turnaround this season could be the stuff of legend: six straight losses to start, now sitting in fifth spot.

Sydney are the team no rival club wants to meet in September but a Crows win will likely end the top-four hopes of John Longmire’s side.

Pyke said the chance of putting a dent in the Swans won’t motivate Adelaide.

“It’s less about us doing something to their path to the finals, it’s more about us continuing to play the way we want to,” he said.

But Pyke was well aware of the confidence boost for tomorrow night’s victor ahead of a possible finals re-match.

“One thing you’re mindful of when you’re playing any sport, really, is the impression you leave with the opposition, in terms of how you want to play,” he said.