The round three clash of the South Australian rivals was marred by off-field racism controversy and a fight on the Adelaide Oval hill, while last year’s meeting in the season’s penultimate round ended in bitterness after a supporter threw a banana at Crows star Eddie Betts.

“We just want fans to be respectful of each other and make sure it’s an enjoyable environment for everyone,” Port captain Travis Boak told reporters today.

“That is what we expect from fans.”

Betts and Port’s Paddy Ryder were the subject of racial taunts from fans last time the bitter rivals clashed in what Crows captain Taylor Walker said was unacceptable.

“Come to the footy, enjoy the footy. Make it a fun, enjoyable environment to be at,” Walker said.

Sunday’s keenly-anticipated fixture will be a sell-out, with the Crows hoping to retain top spot and fifth-placed Port eyeing a finals double chance.

The Power haven’t beaten Adelaide in the past four meetings, but skipper Boak dismissed the recent record.

“We want to win because there is a lot on the line in terms of the season,” Boak said.

“We are looking for a top four spot and that is what we’re focusing on this weekend, to get the win to make sure we stay in contention.

“Whether we stop the four losses in a row, that is not what we’re thinking about. It’s all about getting the four points this weekend.”

“I don’t think you can ever work out an opposition,” he said.

“They have got different personnel, they have adapted and changed a few things.

“So like most Showdowns it will be starting in the middle with two of the in-form ruckmen in the competition and two great midfields.” 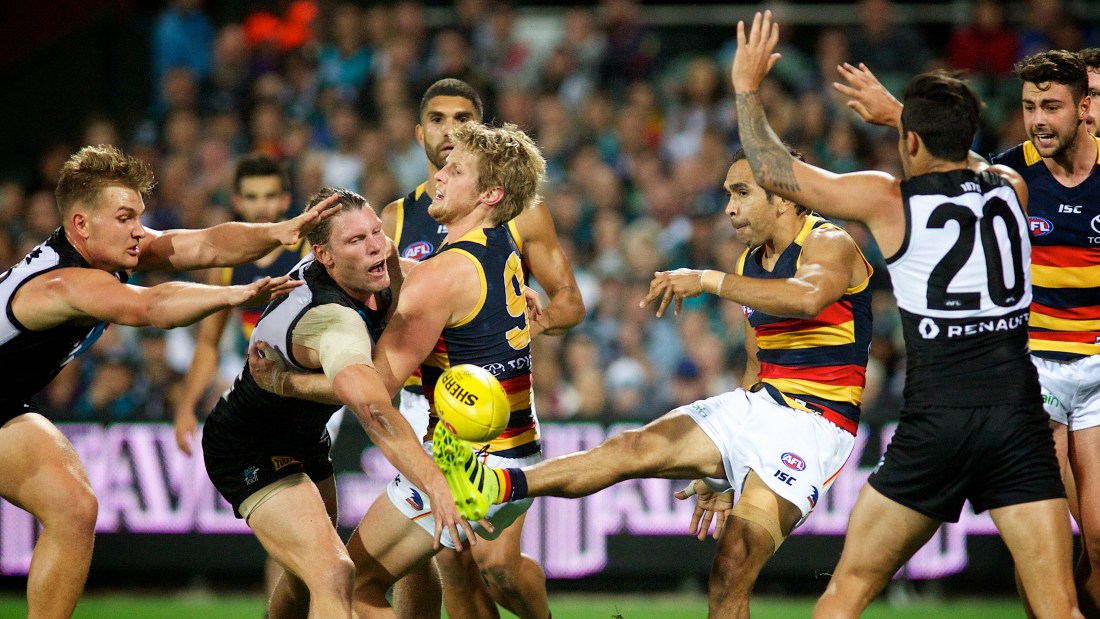 The last Showdown was a fierce affair, both on the field and off. Photo: Michael Errey / InDaily

Port have only one player unavailable for selection through injury – though unfortunately for the Power, it is one of their most important.

The Power have confirmed livewire forward and emerging midfield star Chad Wingard will be unavailable for the crosstown clash, listing him as a 1-3 week proposition to return from an ankle injury sustained against Melbourne.

“I’m quite confident all three will be fine if they get through tomorrow,” Walker said.

Meanwhile, Walker hopes the sought-after Lever chooses culture over cash. The defender, who falls off-contract with the Crows at season’s end, has reportedly met with officials from Melbourne.

“Is there?” Walker queried when asked about the reports.

“It’s probably a decision for Jake to make.

“I would like to think that we create an environment and culture that when it comes for him to make his decision, then it’s the right one and he wants to stay at our footy club.”

Lever has said he may not make a decision on his future until the end of the season, with the Demons and Western Bulldogs pitching multi-million dollar long-term deals.

Adelaide’s offer is reportedly well under the rival bids but Walker took aim at ex-great Wayne Carey for saying the Crows were renowned for low-balling contracts.

“It’s an interesting comment. Does he do our books, does he?” Walker said.

Lever’s teammate Mitch McGovern also is yet to recommit to Adelaide beyond this season amid interest from his home state of Western Australia.

Walker said the 22-year-old McGovern and Lever were “just like every other player – they are super-important to our side”.