Neale has established himself as one of the league’s most prolific ball winners and a vital part of Fremantle’s future.

The 23-year-old set a new AFL record last year for the most disposals in a home-and-away season – 737 possessions in 22 games.

Neale’s hot form has continued this season, with the 177cm ball magnet tallying 40 disposals, nine clearances, and a goal in last week’s win over Essendon.

But six years ago the young lad from Naracoorte, playing for the Glenelg Under-18s, feared his lack of pace would result in him being overlooked in the national draft – with recruiters labelling him too slow.

Neale was eventually taken by Fremantle with pick No.58, and he’ll notch his 100-game milestone in Sunday’s clash with Richmond at the MCG.

“You see most guys my size in the AFL are pretty quick. I don’t have that lightning pace,” Neale said.

“That was the main attribute I was missing. (I was) too slow. The word was I wasn’t the quickest bloke going around.

“Heading into draft day I wasn’t sure at all.

“My management was quietly confident I’d get picked up late, or in the rookie draft.

“It was a really nervous day, but one of the most exciting days of my life as well.”

Neale has worked hard to build up his speed in recent years, but it still remains one of his major weaknesses.

“I think my first 10 metres is reasonable,” Neale said.

“But then most blokes can run me down after that. So I’ve got to get rid of the ball after the first 10.”

Neale was the subject of a number of trade rumours last year, with some sources claiming he was considering a move to either Adelaide or North Melbourne.

But he put those rumours to bed by re-signing with Fremantle for a further three years.

Fremantle (4-3) have risen to ninth on the table after snaring four wins from their past five games.

Neale has required some injections to ease pain in his knee in recent weeks, but said he pulled up well from the win over Essendon and hopes the issue won’t resurface again.

Meanwhile, Cats veteran turned Bomber James Kelly will play his 300th AFL game at the weekend – against his former clib.

He says he didn’t exactly plan to play the milestone against Geelong, but he’s delighted nonetheless.

Kelly played 273 games with the Cats, including winning grand finals in ’07, ’09 and ’11, and will play his 300th match at the MCG on Saturday night after being rested in round six. 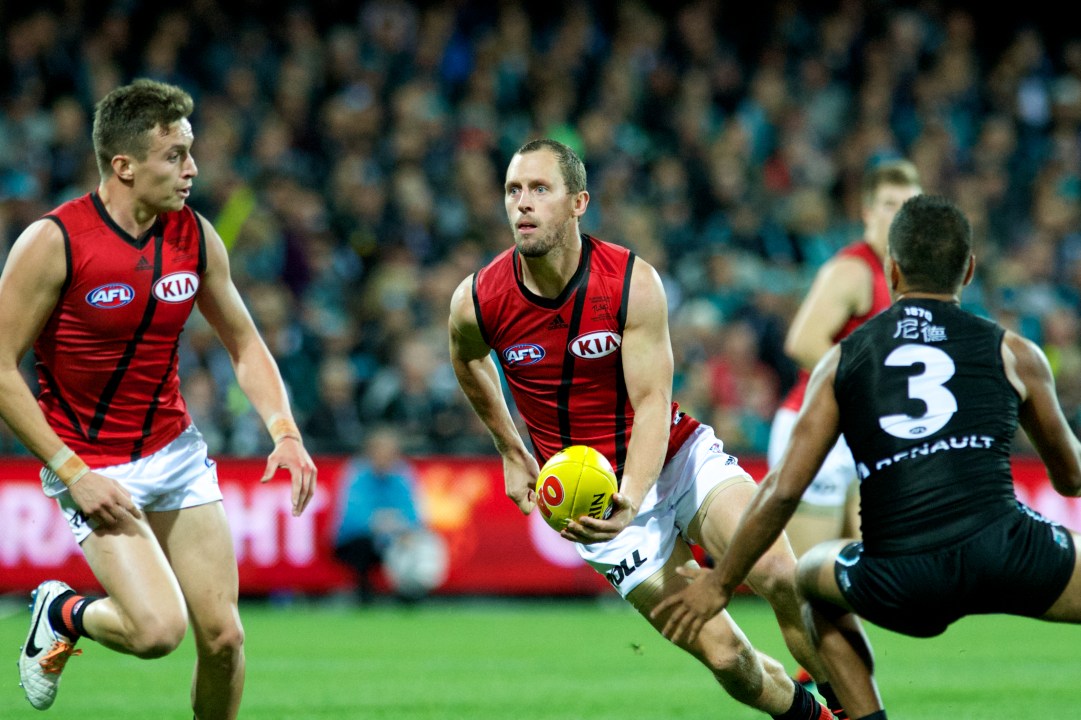 “I’d be lying if I said I didn’t look at the fixture at the start of the year,” Kelly said with a smile yesterday.

“But in my overall plan I was always going to be due to miss a week [and] it’s worked out well.

I didn’t think my career was over – it was over

“There’s still a few guys who I talk to regularly there and it will be nice to be out there with them.

“Obviously if you could choose anyone to play against I would have always chosen Geelong.”

Kelly reluctantly retired at the end of the 2015 season after he wasn’t offered a new deal by Geelong.

But he grasped the opportunity presented by Essendon when they recruited him as one of 10 top-up players after the club was rocked by doping suspensions ahead of the 2016 season.

Kelly played 20 games and finished equal-second in the Bombers’ best and fairest count.

“I didn’t think my career was over – it was over and I’d moved on,” Kelly said, reflecting on the bizarre turn of events.

“So to get the opportunity to play again last year was something that I really enjoyed and enjoyed enough to feel like I could keep going this year.

“Looking back on the whole 18 months it’s something I’m glad I took the chance at doing.”

At 33, Kelly is almost certainly playing his final season of AFL football – again – but he hasn’t made any firm decisions on his future.

“I learnt last year to never say never,” he said.

“But there’s a lot of water to go under the bridge.”