Johnson has not been charged over his involvement in the crash, which saw several vehicles damaged, but police have told InDaily his actions “will be examined as per normal protocols”.

Impey has been reported for driving without due care, failing to exchange particulars and failing to report a collision, and will face court at an unspecified date.

The Power today announced Impey had been fined $5000 and banned from playing in the club’s first minor round match in 2017, after he allegedly crashed into four parked cars and fled the scene, only handing himself in to police more than 16 hours later.

Port Adelaide CEO Keith Thomas told media the promising small defender had been drinking at a poolside party on Saturday at the Norwood home of teammate Angus Monfries.

InDaily revealed yesterday that the football club gave Impey legal advice after finally making contact with him after midnight on Sunday. He did not present at the Parks Police Station until after 11.30am later that morning.

Impey’s sanction was decided by Port’s leadership group, who also consulted the AFL and its Players’ Association.

However, that sanction will now also be applied to 19-year-old Johnson, after the club learned he was also involved in the incident. 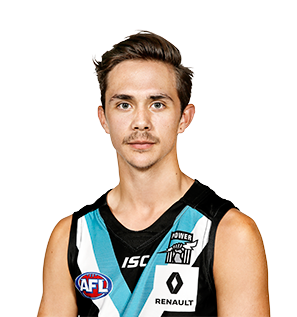 “Port Adelaide can now confirm South Australian Police have been advised that player Aidyn Johnson was a passenger in Impey’s vehicle at the time the incident occurred,” a club statement said.

“As a result of this information, the leadership group, again following consultation with the AFL and the AFLPA, determined to apply the same internal sanction to Johnson.”

The club says it will not make any further comment “as the matter is subject to an ongoing police investigation”.

A spokesman told InDaily Johnson had not been charged with any offence, but would not say whether he also left the scene of the accident or how and when the club learned of his involvement.

SA Police told InDaily in a statement: “We can confirm the Port Adelaide Football Club have informed police that another person was allegedly in a car involved in a hit-run crash at Norwood on Saturday night.”

“The information has been passed on to the investigating officer and will be examined as per normal protocols,” the statement said.

“Police will not be making any further comment as the matter remains under investigation.”

Aidyn Johnson played in this year’s NAB Challenge, but is yet to make a senior debut. Photo: Craig Golding / AAP

Port said that “following consultation with the Motor Accident Commission”, both Impey and Johnson’s $5000 fines would be donated to Brain Injury SA “in support of its road safety programs assisting people who have acquired brain injury as a result of road related trauma”.

The club’s initial release referred to the Brain Injury Network of SA (BINSA), but the organisation rebadged itself as Brain Injury SA in November 2015.

Johnson’s round one ban may have little impact on his senior prospects, as he is yet to play an AFL game since being drafted at pick 45 last year.

Impey has played 55 games after being chosen with the Power’s first pick (number 21) in the 2013 National Draft.