But he and Richmond captain Trent Cotchin never considered knocking back the joint award after the AFL officially stripped Watson of the 2012 Brownlow for his role in the Essendon supplements saga.

“In this game I guess you accept the umpire’s call,” Mitchell said during a press conference with Cotchin this morning.

“We’re both very proud to be Brownlow Medallists.

“We’re not going to go into (whether Watson’s sanction was appropriate). That’s not for us to decide.”

The pair, originally runners-up to Watson for the AFL’s greatest individual accolade, will receive their medals in a private ceremony next month.

Cotchin was holidaying with his family in Noosa when he received a nervously-anticipated phone call from AFL chief Gillon McLachlan on Tuesday confirming the league’s decision.

“We were waiting for a four o’clock call from Gil and we wondered whether he had a watch,” Cotchin joked.

“It’s mixed emotions. We’re still playing now and it’s been a four-year process but we still have won the most prestigious individual award in different circumstances. It’s definitely something we’ll reflect on post-career moreso.”

Mitchell was sitting in his backyard with his young son on his lap when he learned of the news.

“There’s a lot of things that have happened in the past that have got very little to do with us,” he said.

“But when I’ve got my son sitting there and I get a phone call saying ‘you’re a Brownlow Medallist’, I’d be lying if I (said) it was not a joyful experience to share that with my family right at that point.

“There’s a lots of awkwardness in the way it’s happened but hopefully from this point on we can put that side of it behind us and just take it for what it is.” 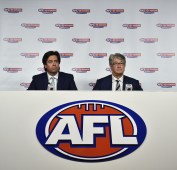 Honour without joy: Jobe's Brownlow handed to Cotchin and Mitchell

Neither of the winners have spoken to Watson since Tuesday’s AFL Commission decision but Mitchell says he feels a great deal of empathy for the Bombers veteran’s father, Essendon great Tim Watson.

“I don’t know Jobe at all. I don’t have his phone number or anything like that,” Mitchell said.

“Particularly as a father, I feel for Tim. When I look at my son, if he was going through something like Jobe is going through, you’d be heartbroken for him. So there’s that aspect but I don’t feel it’s my place to reach out.”