But it’s too early to guarantee whether North Adelaide small forward Ben Jarman will line up for the club next year, despite potential suitor Hawthorn opting not to pursuing the gifted 18-year-old.

Crows list manager Justin Reid said the nomination was only one part of the process, telling the club’s website: “There are no guarantees for us or Ben.”

“We will be true to our talent order and there is still plenty of work to be done between now and the national draft (on November 25),” he said.

“We will see how the draft selections fall compared to our list of available talent.”

Jarman, the son of dual-premiership hero Darren, had received attention from Crows and Hawthorn, both of which were eligible to nominate him as a father-son selection.

But Hawthorn decided not to pursue Jarman after a trade period of frenetic wheeling and dealing left them without a draft pick before No.88.

“Due to the lateness of our picks in the 2016 national draft – which at this stage carry no points – we felt we could not commit to Ben,” Hawks list manager Graham Wright said in a statement.

“We have informed Ben, Darren and the Adelaide football club of our decision… we will still consider Ben like every other player when we have our selections in the national and rookie drafts.”

Adelaide’s move on Jarman came as the axe fell on utility Ricky Henderson and fringe midfielder Mitch Grigg, as the Crows followed Port in running the ruler over their list for 2017.

After the Power yesterday threw a lifeline to banned former Bomber Angus Monfries but cast defender Cam O’Shea adrift, the Crows followed suit in severing ties with Grigg and Henderson, who failed to find a new home as a free agent earlier this month.

Despite failing to crack the senior side this year, Grigg’s departure is interesting given the Crows’ dwindling midfield stocks, with Jarryd Lyons traded to the Gold Coast and Adelaide unable to close a deal for wantaway Blue Bryce Gibbs – who the club failed to net as a father-son recruit in 2006.

That could put the spotlight on the delisted free agent window opening tomorrow, with Adelaide one of several clubs linked to ousted Docker Michael Barlow. 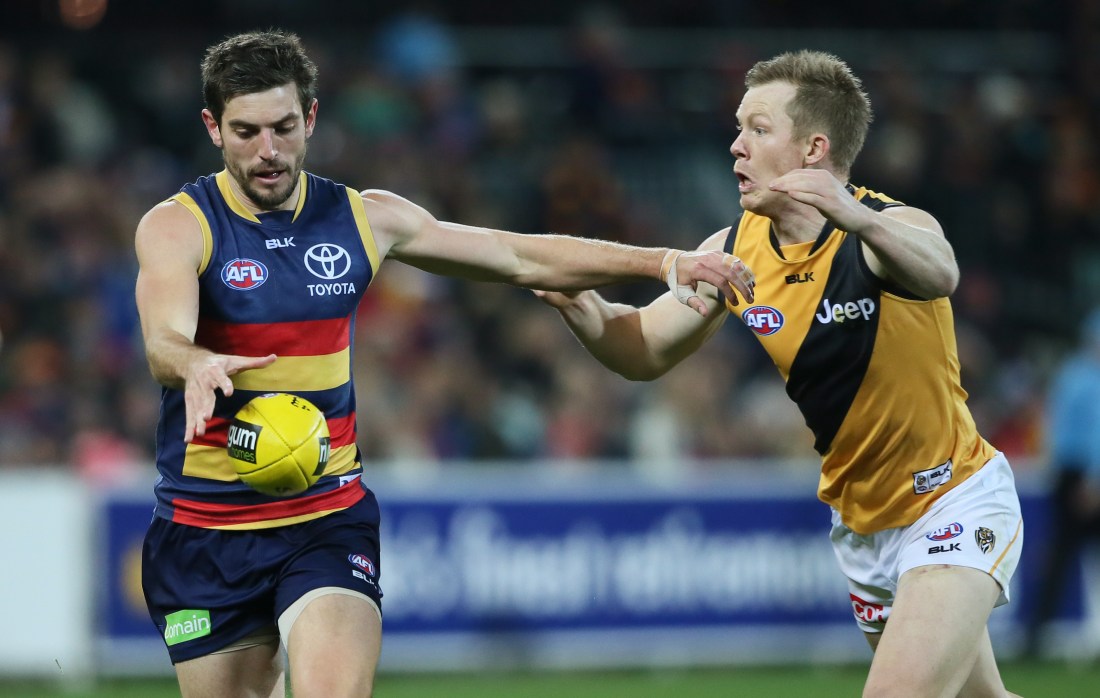 Emerging ruckman Reilly O’Brien has been upgraded from the rookie list, while untried forward Harry Dear and rookies Jonathon Beech and Paul Hunter have been handed contract extensions.

“This is always a difficult time of year at football clubs when some tough decisions need to made,” Reid said.

“We thank both Ricky and Mitch for their commitment and dedication… they have both been professional in their approach and we wish them all the very best for the future.”