But the Crows coach isn’t convinced it’s time to wield a selection axe despite three losses in four weeks.

“Some of those guys played some really powerful and strong footy in the first part of the year.

“That will be a good discussion point, as to what point do we feel the need to bring in some fresh faces and fresh blood … we’ll see the result of that after match committee.”

Pyke and his committee met late yesterday to settle a side for Saturday’s away fixture against Gold Coast.

But he hinted the midfield brigade, soundly beaten in the past two losses against the Western Bulldogs and Geelong, would be afforded another opportunity.

“There is some high quality players and individuals in there who, for one reason or another, aren’t performing at their level that they have in the past.

“And we have a challenge as a coaching group to get them back up to that. That is the discussions that are ongoing.

“But one thing I have learnt over the years is you don’t want to be negative against a group of players who have done a lot of really positive things over their careers.”

Suns’ football manager Marcus Ashcroft says while the 32-year-old has a further concussion test to undergo today, he’d be surprised if Ablett is fit to play the Crows.

“He has another concussion test tomorrow but the way he presented yesterday, we don’t think he’ll be available this weekend.”

Ablett’s absence is the last thing coach Rodney Eade needs as he tries to arrest a terrible run of losses.

Eade’s men have lost five straight including hidings by Geelong, Melbourne and GWS in the past three weeks.

The club’s form has also raised questions about the future of young stars such as Jaeger O’Meara and Dion Prestia, who are both off-contract and attracting interest from other clubs.

Ashcroft says both players have made it clear they’re concentrating on coming back from serious knee injuries before finalising their futures, a situation the club is comfortable with. 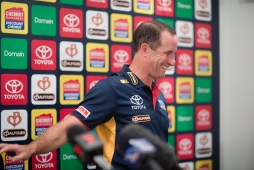 Is this the year of Mr Lucky?

He says O’Meara, who hasn’t played since the final round of 2014, is tracking well in his path back to fitness.

“Without putting a definitive timeline on it, we’re hopeful he’ll play in the next four to six weeks,” Ashcroft said.

“He’s on track and hopefully he’ll be integrated back into full training in the next couple of weeks.”