In this week’s column, the quality of the SANFL reserves under question, previewing the country championships and finally some good news for Glenelg.

Are the reserves relevant?

Anyone watching the Eagles vs Central District SANFL reserves fixture at Woodville Oval last Saturday would be concerned about the quality and the style of football played at this level.

It is time to really look at the structures of the SANFL competition and ask if it can be done better.

An option would be to make the reserves a ‘21 and Under’ competition, and allow a maximum of six overage players to participate in each side, as is currently the case with the SANFL Macca’s Cup under 18s competition.

This would help clubs if they need to bring senior players back from injury.

Another more radical idea is to totally scrap the reserves competition, and let the players have a kick at their foundation club, as the Adelaide Crows state league side do with their development list.

Under this model, clubs would require fewer staff and volunteers needed and the SANFL Under 18s match could be the curtain-raiser to the League matches.

Out of the Redlegs junior program, 18-year-old Zac Richards made his SANFL debut last Sunday in the clash at the Bay.

While Norwood had a shock loss Richards was a solid contributor with 10 disposals and three tackles on a wing.

“I thought Zac adjusted well to League football, he certainly worked hard on his wing,” his coach Ben Warren said.

“He was composed, used the ball well and didn’t look out of place.”

South Australia’s state Under-16 captain last year, 17-year-old Jack Graham, made his league debut for North Adelaide in their clash with the Bloods.

The 180cm and 77kg on-baller  Graham had an excellent debut with 15 possessions, six marks, three tackles and a couple of clearances. He was even credited with a hit out. 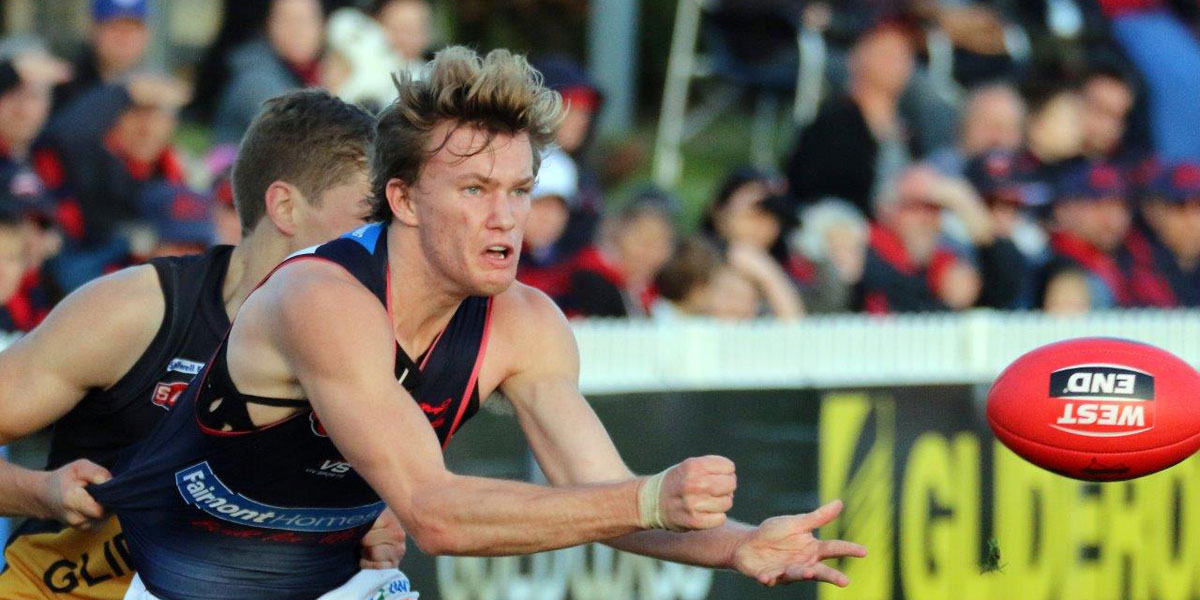 It certainly has been a journey to his century of SANFL games for Michael Wundke.

He has played for three SANFL clubs – North, South and Woodville West Torrens – and it has taken nine years for the Eagles goal sneak to reach his 100th match.

This was achieved in last Saturday’s round 11 win against Central District.

He debuted with North in 2007 as an 18-year-old against the Magpies at Alberton in round seven.

“We had a big victory, around a 12-goal win and I was under the guidance of Andrew Jarman,” Wundke recalled.

“At the end of that year, I was the rookie drafted by North Melbourne.

“I had two years on their lists – one on rookie and one as a senior –played 44 VFL games with the North Ballarat Roosters and was involved in two (VFL) flags.” 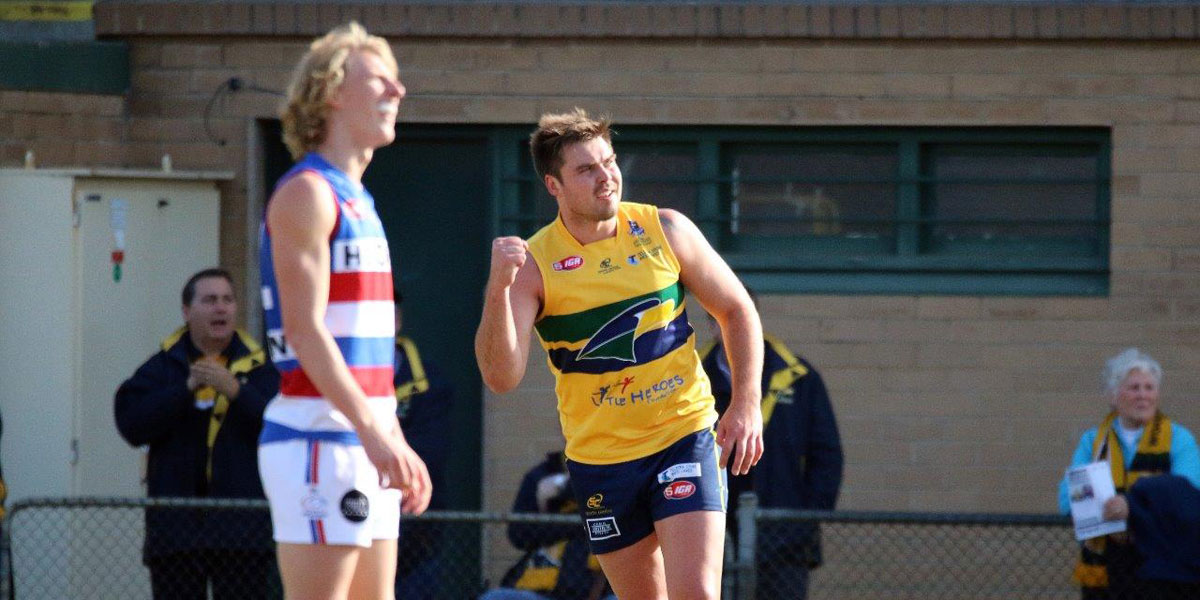 He was a member of the Roosters side that defeated Gary Ayres’ Port Melbourne in 2008 and in the following season’s decider  North Ballarat defeated the Northern Bullants combination, which included Sam Jacobs and Adam Hartlett. His only other flag was with Walkerville Under 15s back in 2003, when current North Adelaide captain Greg Gallman was skipper.

After he returned to the Roosters for a season in 2010, Wundke moved to South Adelaide for following winter, winning the SANFL’s leading goal kicking award twice before arriving at Oval Avenue at the beginning of 2014 campaign.

Wundke played 16 league games with North, a further 58 at the Panthers and last Saturday was his 26th for the Eagles.

“Playing the 100th is just something that happened along with way,” the 27-year-old triple Ken Farmer Medallist mused.

“It (the milestone) really is something to look back upon in the years to come.”

When asked about his ambitions moving forward Wundke was succinct.

“Simply a premiership… or two or three or four would be good,” he laughed.

Glenelg coach Matthew Lokan has made some excellent decisions lately.

One of the more inspired moves in Glenelg clash with reigning premiers Norwood on the weekend was to use big man Warrick McGinty as a strong bodied midfielder.

McGinty, from the Bays’ south east country zone club, the Kongorong Hawks, first played league football back in 2010, and became a semi regular player in 2012.

Lokan used McGinty in the same way the Cats use athletic big man, Mark Blicavs, and on Sunday at Gliderol Stadium he had a marked impact on the contest.

Not only did he quell Matthew Panos, but he was a significant factor in the unlikely victory.

He had 12 disposals, laid three tackles and won nine hit outs, mostly as third man up.

“Despite being 198cm and 108kg, Warrick is among the top six at the club in endurance and speed,” Lokan confirmed.

“Warrick certainly gave us another dynamic and can play a variety of roles in the midfield.

“It was inspired by chats with former team mates of mine, Blake Caracella and Shane O’Bree, who are both assistants at Geelong.”

Glenelg’s win over Norwood was its best performance in the past 18 months, and came just two days after the club extended coach Lokan’s contract.

Against reigning premiers and the second placed side on the ladder, the Bays held off the fast-finishing Redlegs for a special nine-point win, after leading by more than five goals at three quarter time.

The extension will ensure Lokan remains at Brighton Road until the end of next year.

”We feel Matt has done a fine job in charge — on and off the field — and that the club is moving in the right direction,’’ Glenelg’s CEO Steve Moore said.

“Matty has introduced a number of young players into the team and we believe the foundations have been laid for a bright future.

“We were very keen to lock him in early for next year so we can create some stability and go about putting a plan in place which will reap rewards in 2016.’’

The annual SA Country Zone Championships will be held at Port Augusta’s Central Oval this weekend.

This competition has proven to be a solid breeding ground for SANFL and AFL footballers.

AFL footballers who have displayed their talent at this level include current Melbourne player and 2009 Crows club champion Bernie Vince who played as a junior on the Yorke Peninsula. Other big names include Adelaide defender Graham Johncock, who is expected to return with the Western Zone this year, Ryan Gamble (Geelong/St Kilda), Jarrad Rooke (Geelong), Elijah Ware (Port Adelaide) and Stephen Tiller (Western Bulldogs). 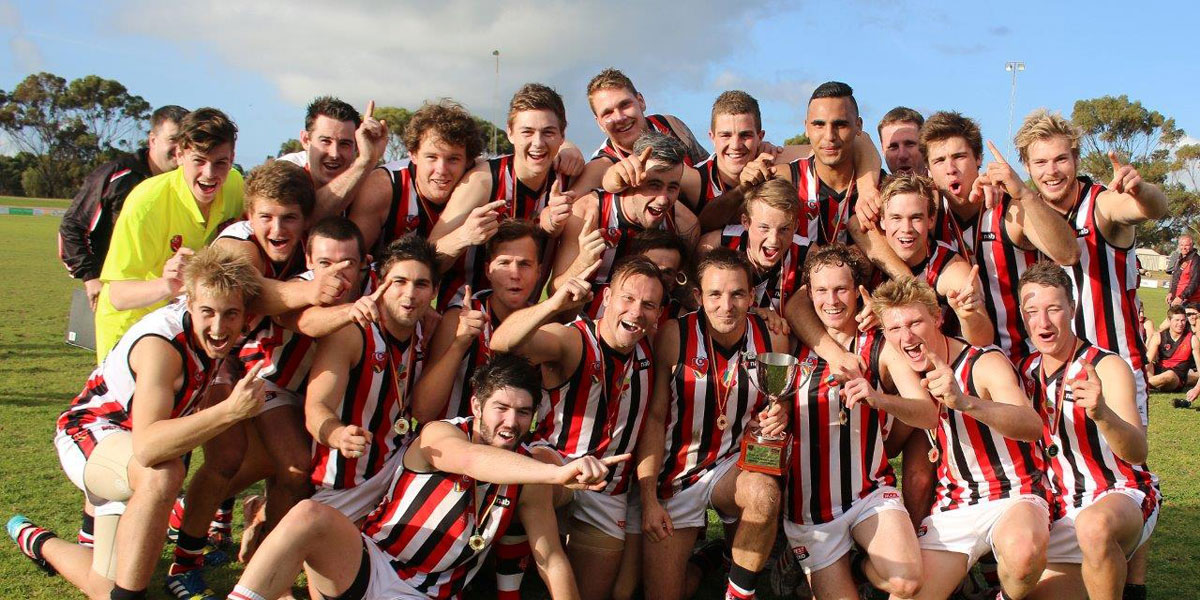 “At the time it was the greatest experience of my football life,” Redman said.

“I received strong support from the senior boys including Liam O’Neil; a couple of phone calls telling me to trust myself and my ability.

“Winning the title was awesome and it was good to be a part of history making team.”

Today he is playing in the final game of the South Australian Under 18s program against Victorian Metro at Etihad Stadium.

Grassroots is published in InDaily on Wednesdays.