In this week’s round-up of local footy news, pressure mounts on a SANFL coach, why Cornes and Rowe should take responsibility for the state team’s shellacking, and much more.

A likeable bloke and a reliable footballer in his days at the Crows, current North Adelaide coach Ken McGregor has underachieved during his couple of years as senior coach at the Roosters.

While injuries have cruelled the club at times this year, the major problem seems to be that McGregor is not getting the message across.

The Roosters have just enjoyed a single victory this season – an opening round win over Adelaide when the Crows ran out of personnel because of injury problems. North Adelaide is sitting in eighth position, three wins behind the fifth-placed Port Adelaide.

Only two years ago, North Adelaide played in the grand final against Norwood. Many of the players from that 2013 team remain at the club. In that contest the Roosters were just 13 points in arrears with a quarter to go.

Ken McGregor’s VC is solid – he is a former reserves premiership coach at Glenelg, and held the senior job at the Port Adelaide Magpies.

Now into his second year at Prospect, McGregor must turn things around quickly.

They have a top three list and, at this point, have produced bottom three results.

He kicked 8.8 and two further shots went out of bounds on the full.

However, his goal kicking practice at training over the past seven days has proved to be effective.

He had a day out in the weekend’s clash against 2014 Grand Final opponents South Gawler at the Gawler Oval “Dog Track”. In stark contrast to last week, he kicked a career high of 15.1 in the emphatic win against crosstown rivals.

“It was a special effort,” says Mercer’s coach Damien Herzick (who, by the way, 15 years ago kicked 18.4 in an Amateur League game for Salisbury North against SMOSH-West Lakes).

“He’s had 32 scoring shots in two weeks of football.

“Against South he was significantly more accurate than at Angaston the previous week.

“He was also given silver service from the midfielders, including Crows top up player Charlie Molyneux.

“But if you have kicked 15 goals in a game, you must be best on ground.

“My assistant was arguing for Charlie to grab the first preference votes.”

Returning to state coaching duties at the age of 67, Graham Cornes and his chairman of selectors Stephen Rowe need to shoulder the blame for South Australia’s comprehensive 45-point loss to Western Australia in the weekend’s state league clash.

The SANFL must also stand up and acknowledge that selecting Cornes as coach was wrong.

The selectors’ ruck choices and the lack of youthful speed were exposed on the wide expanses of Perth’s Lathlain Park.

Their apparent want to select experienced players on reputation, instead of form footballers in the SANFL this year, was a fatal flaw.

In general field play the Sandgropers had 46 additional possessions.

This SA side was 14 points down at the main break and the WA boys further increased their lead at lemons by 10 points.

Over the 93 battles between the WAFL and the SANFL since 1904, Western Australia now leads 47-43.

In his first game with SA, one of the two youngest selections – 23-year-old Tom Keough – won the Fos Williams medal, as the Croweater’s best player.

The undefeated Sturt side and South Adelaide have made the 2015 SANFL Macca’s Shield Under 16 Grand Final, which will be played this weekend.

The Double Blues have dominated the competition, building an impressive percentage of 76.77 in the nine-game abridged season.

The Panthers’ junior program has been resurgent under talent manager Tony Bamford and his coaching staff, including grand final coach Julian Farkas. This will play in the decider at this level for the first time. The last time South was in an underage grand final was at under 17 level in 2005.

The most consistent players in the competition included Lachlan Pascoe from Norwood and Ryan Falkenberg at Central District, who have been in their respective side’s best players in eight of the nine games.

Three others, Eagles forward and all Australian under 15 last year Isaac Moller, another Redleg Corey Smith and Connor Rozee from North Adelaide were mentioned in seven games.

West Adelaide midfielder Will Snelling, captain of the South Australian under 18 side in 2015, joins esteemed company.

When he informed of the names he was following as captain, Snelling’s immediate reaction was: “I didn’t realize the quality of my predecessors.”

The recent list of state underage captains (see below) reveals a procession of AFL stars.

Snelling is building a strong resume himself.

He has represented his state at Under 15 schoolboys, at the Under 16s nationals in Sydney in 2013 and now is in the Under 18s national program.

“I’ve been in the elite development programs since I was 13,” says Snelling, a Mercedes College student.

“At the (National) under 16s at Blacktown in Sydney, we lost the last game by three points to finish second.

“There is still plenty of fire in the belly to make up for that result.” 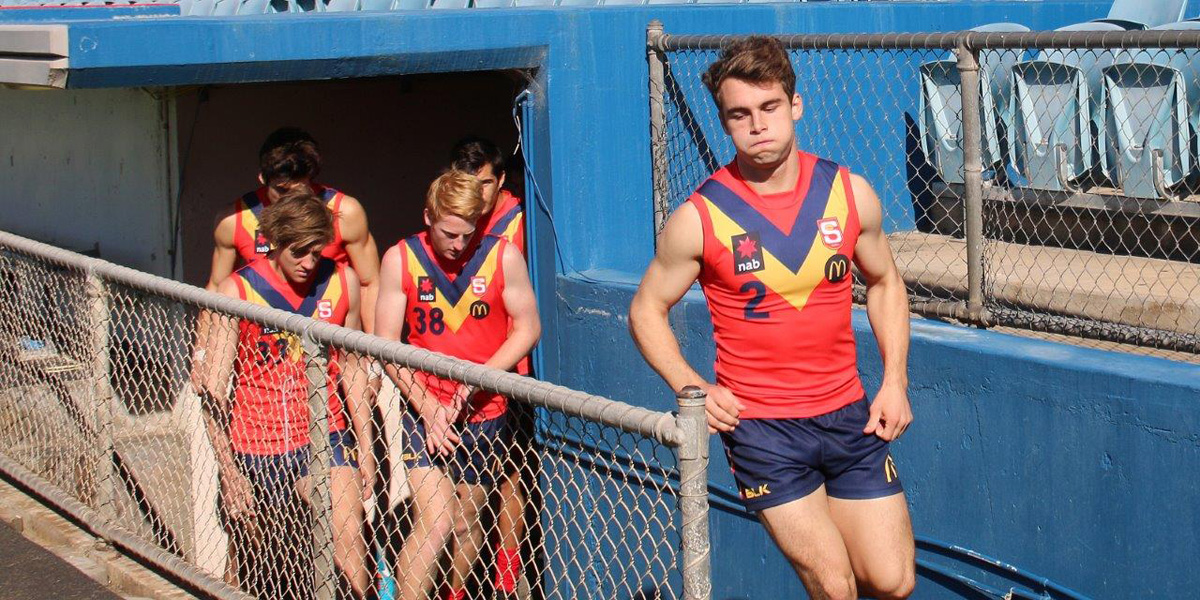 Will Snelling leads his state teammates onto the ground.

A key member of the West Adelaide Under 18s premiership side last year, securing 33 possessions in the grand final win over the Eagles, Snelling has plenty of team mates from that success in the under 18s squad this year.

“He’s a doer that gets his hands dirty.

“Not an extroverted type – he’ll lead by example and that is a part of the reason he got the job.”