Australia will take an unassailable 3-0 series lead into the Boxing Day Test after crushing England by an innings and 41 runs in the third Test at the WACA Ground yesterday.

At the start of the series, Australia’s selectors were criticised for plucking Tim Paine out of obscurity to don the wicketkeeping gloves, and for also handing Shaun Marsh an eighth Test recall.

But each of the selections proved to be a masterstroke. 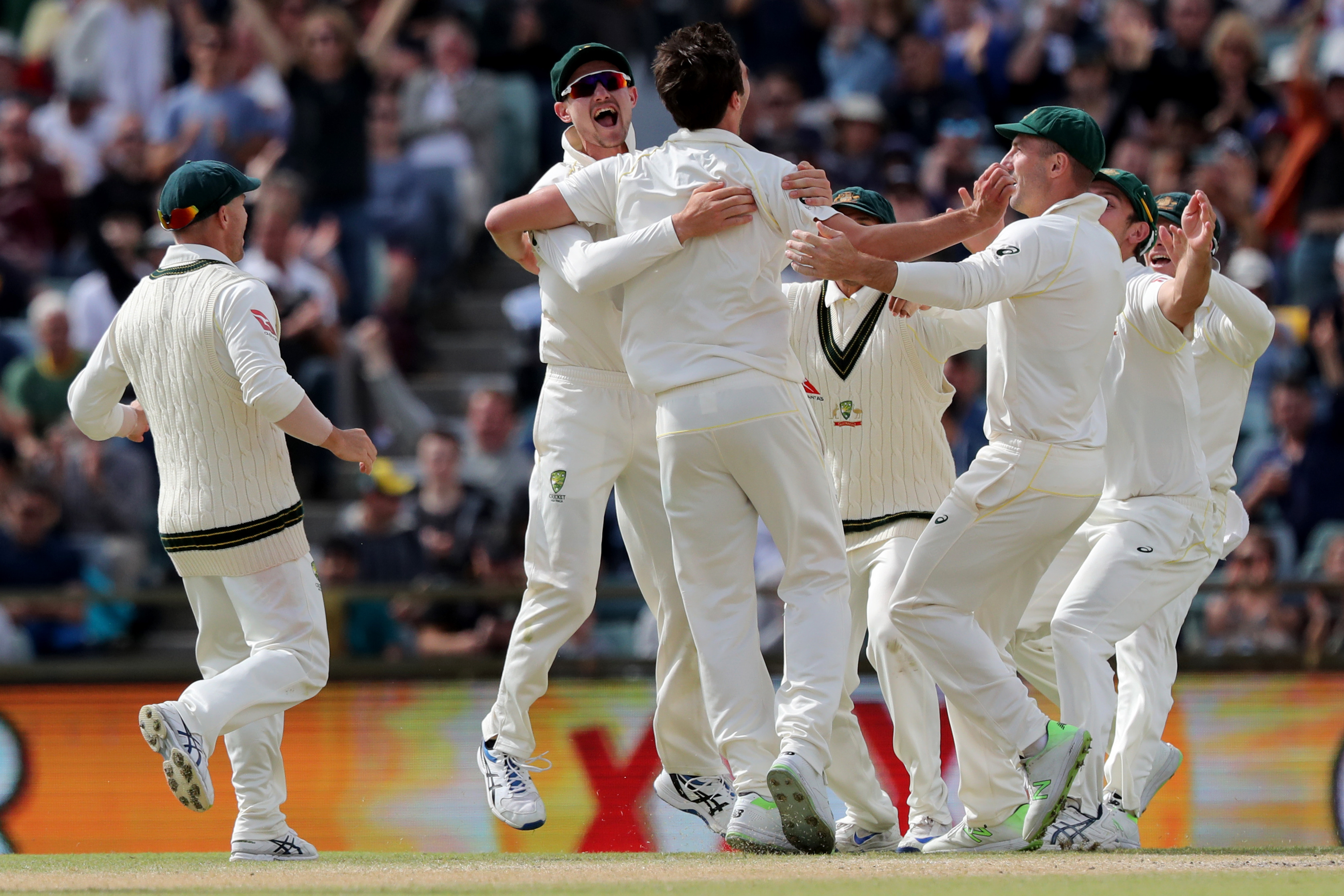 Paine impressed with the gloves, and averaged 43.33 with the bat.

Shaun Marsh was named man-of-the-match in Australia’s triumph in the day-night Test in Adelaide where he scored an unbeaten 126.

Bancroft scored an unbeaten 82 at the Gabba, and ruffled England’s feathers by revealing he was headbutted by Jonny Bairstow.

And Mitch Marsh finally lived up to his potential with his maiden Test century – a sparkling 181 at the WACA Ground.

“A lot of people came out and said they were some very bold selections at the start of the series,” Smith said.

“The selectors get criticised a lot, but I think they’ve done a terrific job with the squad that we picked at the start. I thought they were really good selections.

“And everyone who has come in has done an exceptional job. A lot of credit has got to go to the selectors.”

But the work doesn’t stop there for the selectors, who now have to weigh up the merits of whether to play star paceman Mitchell Starc in the Boxing Day Test.

Starc was hampered by a bruised right heel in Perth.

And given his injury history and a Test tour of South Africa to follow after the summer, selectors may opt to rest him for Melbourne.

If they do rest him, Jackson Bird is set to get the nod for the MCG Test after the selectors named an unchanged 13-man squad.

Smith expressed his disappointment at a leaky WACA cover that almost cost his side a chance to push for victory during the third Test. Morning showers delayed the start of play yesterday, with Australia requiring just six more wickets for victory.

But the biggest issue were soggy patches on the pitch that got wet overnight when rain leaked through the covers.

Other past Test stars were also critical of the situation.

During the drama, England coach Trevor Bayliss questioned whether the wicket was fit for cricket, saying the leaky covers had made the pitch dangerous.

Ground staff used blower vacuums in a bid to dry several damp patches on the pitch, and play eventually got underway at 1pm local time.

Smith’s men needed less than two hours to clean up the remaining six wickets in a win that reclaimed the Ashes for Australia.

Smith joked that he had looked at the rain forecast on about 35 different websites the night before day five.

But he didn’t expect to see a rain-soaked pitch when the covers were taken off on Monday.

“I think it was a shame that some water was able to get through the covers in the first place at an international venue,” Smith said.

“That was a shame to start the day.

“But I feel that the umpires made the right call at the time to get us back on and play the game. The whole thing basically dried out and it was hard.

“They deemed it fit to play – I supported their decision, and thought they made the right decision.”

England captain Joe Root tried his best to convince the umpires that the pitch wasn’t fit to play on.

But after the match, Root said the umpires had followed the procedures correctly, and made the right call to let play resume at 1pm.

“So I think credit has to go to the umpires for making the right call when to start the game. They gave it opportunity to dry out.

“It’s a very difficult one because they’re in a position where there is obviously a lot of pressure to get the game going.

“And at the same time you have got to make sure that the safety of the players is paramount. And fair play, I think they got it right.”

All major Test matches in Perth will move to the new 60,000-seat Perth Stadium from next year, meaning the WACA will never host another Ashes clash again.

Plans are afoot to turn the WACA into a boutique 15,000 seat venue, with administrators hopeful the redevelopment can be completed by 2030 if they can secure enough government funding. 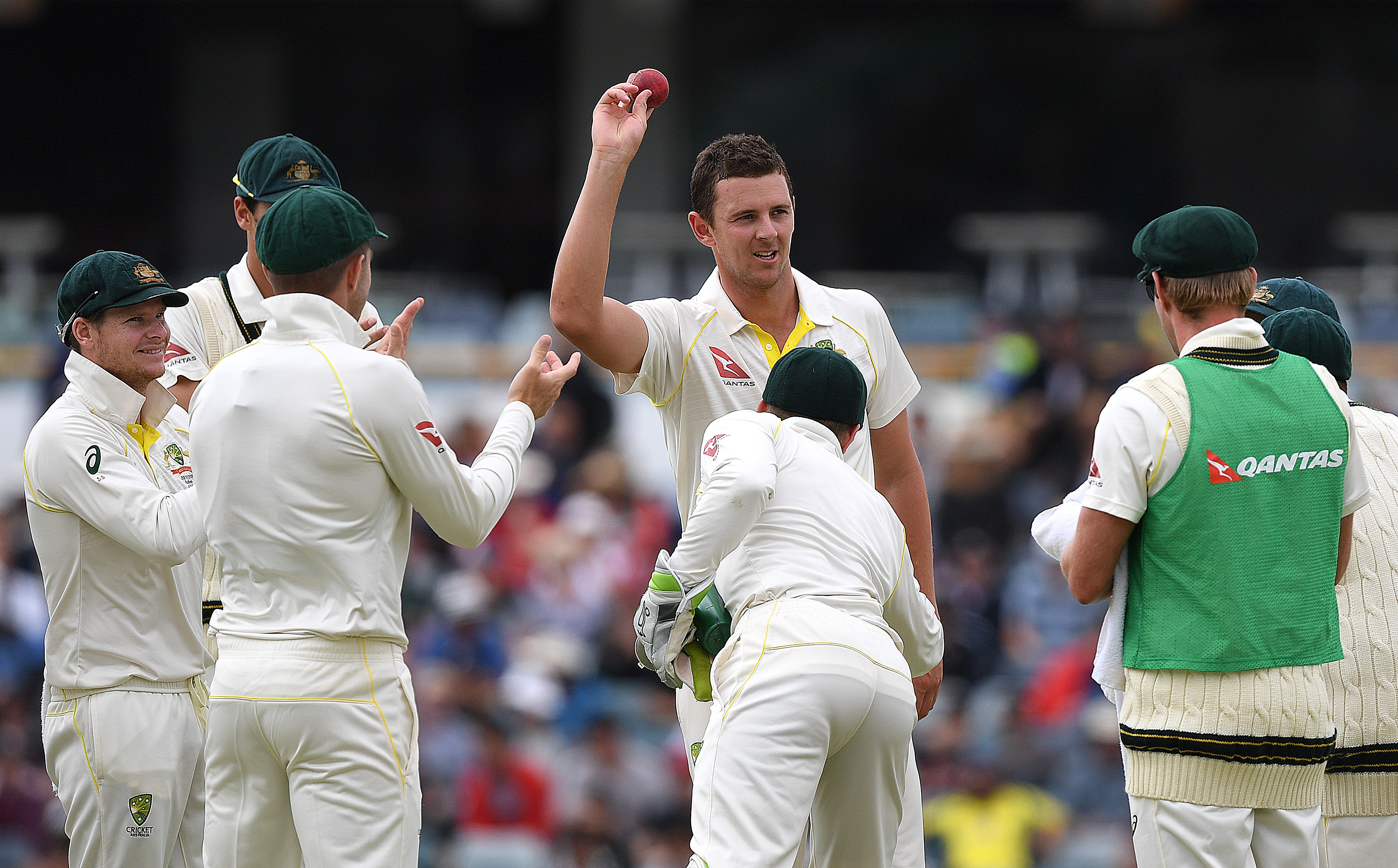 Smith admits he’s already had a few chats with coach Darren Lehmann about the 2019 Ashes, with the skipper urging teammates to strive for the top after reclaiming the urn.

Australia were fifth on the International Cricket Council’s Test rankings a month ago, having topped the table last year then tumbled thanks to shambolic series losses to Sri Lanka and South Africa.

Smith’s team will clamber above England and sit third on the Test charts if they complete the 5-0 sweep the captain craves.

The short-term goal is for Australia to overhaul India and South Africa and become – at least according to the ICC’s charts – the best Test side in the world.

The long-term goal is to retain the urn and trump England on their own turf – something that hasn’t happened since Steve Waugh led Australia to a 4-1 triumph in 2001.

Winning an Ashes series in England was one of three items that Smith listed on the bucket list in his recently-released biography.

“We have conversations here and there, myself with Boof (Lehmann), the selectors and stuff,” Smith told reporters.

“Just about certain things we could do over there.

“It’s still a fair way away – right now I just want to enjoy what we’ve done over the last couple of weeks. It’s been quiet remarkable.”

Smith’s XI has been overhauled semi-regularly since he was appointed captain following Michael Clarke’s resignation, which came during the 2015 Ashes.

However, most members of the current side should be – injury and form permitting – in the mix to face England in 2019. Shaun Marsh will be 36 during that series but will no doubt draw inspiration from Chris Rogers and Adam Voges’ success at such an age.

“I’d like to hope this team can keep growing, keep getting better and keep working our way up the rankings,” Smith said.

“Just try and get better as a team and have the success we want to have as a team.

“We’ve still got a long way to go.

“But the guys who played in this series have done a terrific job. Everybody has contributed in some part … this has been an incredible couple of weeks and something we’ll look back on in time and just be so proud of.”