Lehmann’s side must defuse the threat of India spinner Ravindra Jadeja on day five if they are to salvage a draw from the third Test.

Steve Smith’s side will resume their second innings at 2-23 today, still trailing by 129 runs. Left-arm spinner Jadeja will make life particularly difficult for Australia’s left-handers because of a rough pitch that will ensure plenty of balls misbehave.

Lehmann acknowledged it would be an immense challenge for his side to keep the series level at 1-1 ahead of the Dharamsala decider that starts on Saturday.

The man who was part of Australia’s drought-breaking 2004 series win in India lamented the fact they were in such a position at all.

Lehmann apportioned blame not to an attack that toiled for 210 overs but a batting order that managed 451 in the first innings after Smith won the toss and was stranded on 178 not out.

“If anything it (the workload of the bowlers) heightens our first innings where we needed to bat a little bit longer,” Lehmann said.

“We fell short by 50, 60 runs and 15 or 20 overs. That’s the challenge for the group to get there and make sure when they’re batting in those scenarios they go big, bigger.”

He said it was “the same issue with England”, who toured India recently and failed to win a Test.

“Now we find ourselves in a position where we’ve got to fight hard on the last day to save the game,” he said.

Australia put down a couple of chances on day four, with Matthew Wade’s drop of Wriddhiman Saha on 51 by far the most costly.

“Wadey kept really well on the whole… he’ll have a look at it and review it and see where he went wrong,” Lehmann said.

“He’s been excellent throughout the whole series on difficult wickets.”

India seized control of the third Test on day four, as Australia gave up a first-innings lead of 152 runs then lost two wickets and almost certainly any hope of victory.

The top-ranked Test nation declared at 9-603 overnight, Australian time, with the visitors slipping to 2-23 in response at stumps.

A draw looms as the best possible outcome for Smith’s side. The skipper will walk out to bat at the start of play this afternoon still wondering how it all went so wrong on a lopsided fourth day that broke all manner of records.

A 199-run partnership between Cheteshwar Pujara and Wriddhiman Saha turned the match – and quite possibly the four-Test series – on its head during two wicket-less sessions on Sunday.

Pujara scored 202, spent over 11 hours at the crease and faced a record-breaking 525 deliveries. It was the longest Test innings by an Indian. 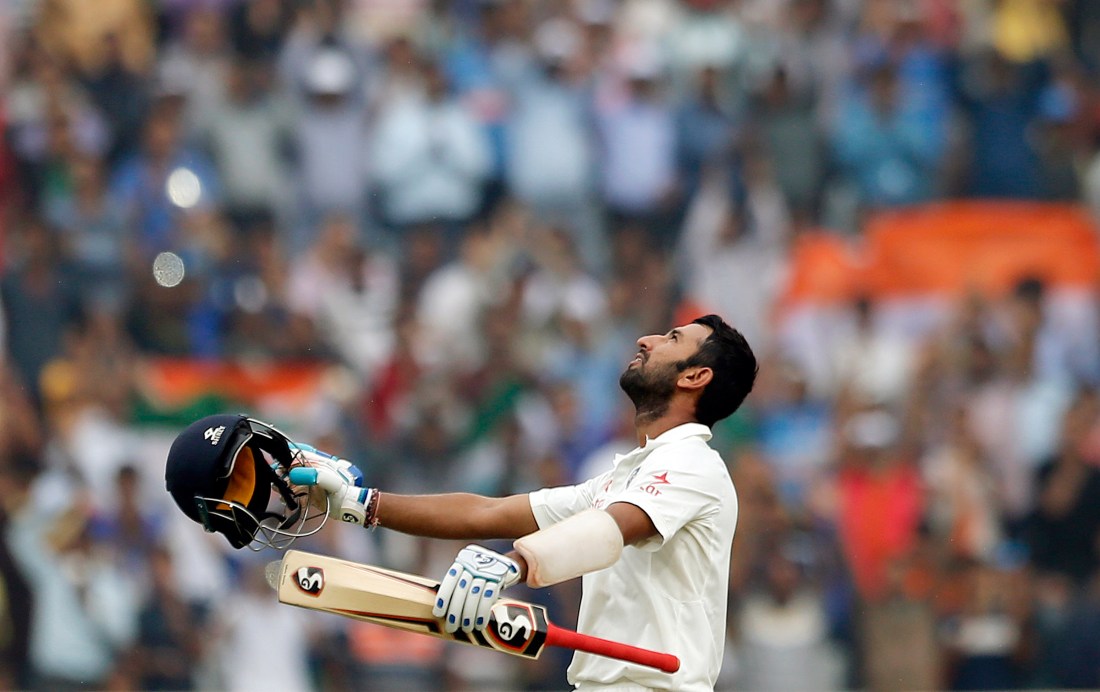 Saha, dropped on 51 by counterpart Wade, contributed 117 runs. Jadeja, who now has seven wickets in the match, belted an unbeaten 54 from 55 balls and was rebuked by umpires for running on the pitch.

Even if India fail to take a 2-1 lead in the series, they will claim a moral victory in forcing the visiting bowlers to toil for a staggering 210 overs. Australia haven’t spent so long in the field during a Test innings since 1975.

All eyes will be on injury-prone express paceman Pat Cummins, who delivered 39 overs in his first Test since a memorable debut in 2011.

But every member of Australia’s attack will be under the pump to back up on Saturday, when the final Test starts in Dharamsala.

O’Keefe, who created the straightforward chance that Wade put down in the 156th over, bowled 77 overs. It is the most overs delivered by an Australian in a Test innings since Jim Higgs’ 79.4 overs against England in 1979.

The tourists, who dismissed Saha for 19 and Pujara for 157 only for both lbw verdicts to be overturned upon review, showed increasing signs of fatigue and frustration as the day wore on.

That was exacerbated by a stinging critique from former national captain Michael Clarke, who argued Smith missed a trick by not bowling himself or using Glenn Maxwell more often during India’s marathon innings.

Smith stuck to his guns in an attempt to break the stubborn stand, with the four frontline bowlers having delivered a total of more than 170 overs by late in Sunday’s post-lunch session. Allrounder Maxwell, called into the XI following Mitch Marsh’s shoulder injury, had delivered two overs at that stage.

Smith, who started his career as a legspinning allrounder, had yet to roll his arm over once.

“Maxwell should definitely have bowled more than two overs… If India continue like this, (Smith) is not going to have a choice,” Clarke said on Star Sports, critiquing his successor’s tactics.

“On good batting wickets, if you keep doing the same things then you’re going to keep getting the same results.

“Australia missed a trick yesterday. They were quite defensive with their fields, a new batsman came out and there were three or four guys on the boundary.”

Clarke said Maxwell was a confidence player and would have been riding high after his maiden Test ton.

“Keep him involved in the game as much as you can. Because he’s got that Midas touch about him, he just finds a way to get a run-out or a wicket,” Clarke said.

Smith noted before the start of the four-Test series that a side strain had prevented him bowling much in the nets.

“If it’s out in the middle and it’s needed, we can look at that then but hopefully the spinners that we have can do the job for us,” Smith said.

It was a career-high workload for Josh Hazlewood (44 overs), Pat Cummins (39 overs) and Steve O’Keefe (77 overs). Nathan Lyon delivered 46 overs and was clearly bothered by the cracked callus on his spinning finger.

Smith remains restricted by a side strain but Maxwell wasn’t carrying any sort of niggle following his maiden Test ton.

“We did speak about it, chopping and changing it a little bit. The game was always on a knife’s edge so you always want your best spinners going.

“(Maxwell) probably could have bowled a few more overs but I thought the spinners toiled really hard as well.

“That’s a call the captain makes out there and I’m happy with that.”

A dream run of results for South Australia, including their romping 193-run defeat of Tasmania, has confirmed the Redbacks’ place in the Sheffield Shield final.

Skipper Travis Head and his teammates faced an anxious wait of some eight hours yesterday, hanging on the result of an intriguing contest in which Western Australia ultimately beat NSW in Perth by just six runs.

It was the result needed for the Redbacks to finish second in the competition and play in the decider against Victoria next Sunday.

Head admits his side did it the hard way, finishing the season with five wins and five losses.

“We had a couple (of matches) through the season we let go and we probably left it to chance a little bit,” he said.

Now his side is pumped to chase the silverware and settle a score after finishing the 2015-16 season on top but losing the decider to Victoria.

“We played them (Victoria) last year and they played well,” Head said.

“They’ve won seven games for a reason this year.

“It’s always going to be a tough ask for us.”

I see it but I don't believe it with 5 runs needed Nev reverse sweeps to get out caught costs NSW final. Great news for Redbacks ??

Key to SA’s final success could be the side’s pacemen.

Quicks Joe Mennie (4-21) and Daniel Worrall (4-33), led the Redbacks’ charge yesterday, with the former claiming two scalps in his first over.

“The wicket was pretty good for batting but our bowlers, they got a shift in the air and got a bit of swing and it was pretty remarkable what they were able to do.”

They lost their top six batsmen for single digits, including ducks to skipper George Bailey and Jordan Silk.

At their worst, the Tigers conceded 5-5 across four overs, including opener Alex Doolan then Bailey and Silk, both caught in the slips.

Batting at No.10, Sam Rainbird top-scored for Tasmania with an admirable 33 but his wicket marked the end of Tassie’s Shield season, during which they claimed just one victory and finished a distant last on the ladder.

After a lacklustre first innings’ total of 225 to which Tassie replied with 332, SA hit back in their second dig reaching 406, including 90 from Callum Ferguson.