The West Indian cricket star has been widely slammed for chauvinist behaviour after attempting to flirt with McLaughlin live on air last night during the Melbourne Renegades’ win over the Hobart Hurricanes in the Big Bash League.

“There wasn’t anything meant to be disrespectful or offensive to Mel. If she felt that way, I’m really sorry for that,” a testy Gayle told reporters in Melbourne this morning before cutting short his enforced media conference.

“It was a simple joke – the game was going on, entertainment – things get out of proportion but these things happen…it wasn’t any harm done…we have to move on, simple.”

McLaughlin was left visibly disturbed during the interview after Gayle appeared to proposition her.

He’s a big guy, it makes you feel intimidated and it’s just not okay.

“Hopefully we can win this game and you and I can have a drink after,” Gayle told the reporter, who seemed dumbfounded at the statement.

The laughing batsman said his dismissal allowed him to “come to this interview to see you”.

“That’s the reason why I’m here, just to see your eyes for the first time,” he said.

“Hopefully we can win this game and have a drink after. Don’t blush baby.”

Social media immediately lit up, with many labelling Gayle’s comments as sexist and an affront to women.

Not clever. Not funny. Not original. How about just let a fine broadcaster do her job.

Well played @Mel_Mclaughlin !! Big fan of @henrygayle but made himself look a bit of a chop there @tensporttv #bbl05

Next time I get interviewed by a male I'll do a Chris Gayle, and I'm fairly sure no one would blink an eye lid.. Let's calm our farms people

A bit of fun by @henrygayle everybody relax – no one hurt, injured or dead!

The Channel Ten social media account didn’t seem to know how to respond, initially posting a jocular reaction, which was later deleted and replaced. 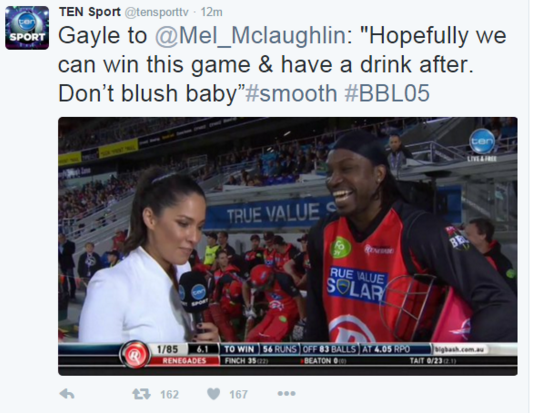 But the Gayle incident sparked a prompt apology from the broadcaster who said Gayle’s comments were not endorsed and that measures will be taken to avoid future such occurrences.

Cricket Australia boss James Sutherland said today Gayle’s outburst bordered on workplace harassment, and he is not ruling out sanctions.

“Anyone that sees the humour in that is misunderstanding and somewhat delusional about the situation,” Sutherland told reporters in Sydney.

Cricket reporter Neroli Meadows said she had experienced similar behaviour from Gayle, who she labelled a “creep”.

“I knew straight away he was going to do it the moment he got out,” Meadows told ABC Radio’s Grandstand.

She detailed an incident while Gayle was playing for the Sydney Thunder several years ago.

“He went at me once in the press conference – okay whatever, you’re having a laugh you’re Chris Gayle everyone laughs,” Meadows said.

“He did it again, it’s cringy, you could almost hear the cringing.

“Then to come up afterwards, stand over me (and say) ‘so when are we going for this drink?’

“He’s a big guy, it makes you feel intimidated and it’s just not okay.”

Former Test opener Chris Rogers said he had distanced himself from Gayle while playing alongside him at the Thunder and was concerned by the example he set for younger players.

“This is a pattern of behaviour,” Rogers told ABC’s Grandstand.

“If you know the guy you see it over and over.”

Network Ten’s head of sport David Barham said McLaughlin would be forced to deal with the incident for a long time.

“For him, he just moves on. What about Mel?” Barham told the network’s Studio 10 program.

Barham said fans would no longer hear from Gayle on or off the field.

“I’ve lost a bit of confidence in that Chris is going to say the right thing out on the pitch,” Barham said.

“This league is all about its appeal to kids, families and females,” he said.

“There’s just no place in the BBL – or, for that matter, cricket anywhere – for that sort of behaviour.”

“Chris has apologised to Mel,” he said after play.

“As an organisation we don’t condone it.

“Between Chris and everyone else, they’ve addressed it … he’s apologised.”

The incident comes at a time when Cricket Australia is trying hard to promote the sport to women.