The lawns, located between the new Riverbank and Western grandstands and the indoor training centre, will serve as a place of reflection and a memorial to the popular player and coach, who lost her battle with cancer in 2008 at the age of 52.

It is believed to be the first time part of a major cricket stadium to be named in honour of a female player in Australia.

Lyn “Lefty” Fullston was a multi-talented sportswoman and teacher, who represented Australia in cricket and netball.  After a 15-year career, she retired as the only female Australian cricketer to take 100 international wickets.

She played 12 Tests for Australia, snaring 41 wickets, as well as 41 ODIs, taking 73 wickets in the limited-overs format.

A $535 million upgrade to make Adelaide Oval one of the most modern and revered stadiums in the world while maintaining its heritage scoreboard and grassy “hill” was completed in 2014. 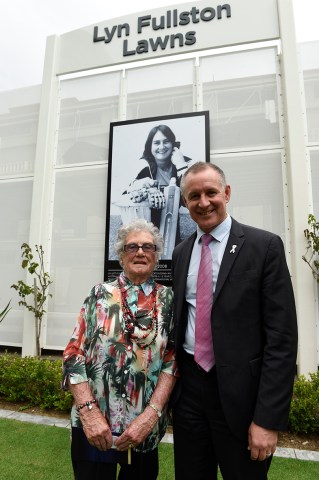 The oval has previously been criticised by South Australian cricket legends, including Ian Chappell, for not recognising women when its redevelopment was launched last year.

SACA President Andrew Sinclair said the naming of the Lyn Fullston Lawns had been a long and thorough process.

“It’s been an important process for SACA to recognise the remarkable history of women’s cricket in this state. The naming of the Lyn Fullston Lawns is just the start, and we are proud to lead the way in acknowledging the tremendous contribution of our outstanding female players,” Sinclair said.

It has been a big few months for women’s sport in South Australia.

Adelaide last week won the right to host the Women’s Australian Open Golf Tournament for the next three years.

All three sandbelt courses are ranked in the top 50 in Australia.

Tourism Minister Leon Bignell said the 2016 event will be telecast to more than 200 million households around the globe on channels in the United States, China, Korea, Japan and the United Kingdom.

He said the tournament would put the spotlight on women’s sport “which we support at all levels, from grassroots to elite”.

The Santos Women’s Tour cycling race was held for the first time this year in conjunction with the Tour Down Under.

In September, the Union Cycliste Internationale – the sport’s world governing body – confirmed the 2016 event would be given international status.