Taylor struggled to see the ball on the way to a seven-ball duck in the first Test against Australia at the Gabba, while he also battled during his second-innings dig of 26.

The 31-year-old booked himself in to see an optometrist after the Test loss to suss out what was going on.

The optometrist discovered that a condition called pterygium – a fleshy overgrowth of the eye’s mucous membrane.- was the reason behind Taylor’s woes.

Taylor left the appointment with a new set of eye drops.

And by the time he walked off the WACA Ground on Monday, he had 290 runs next to his name after producing one of the greatest ever Test knocks by a Kiwi.

“I had to get my eyes tested in between (the two Tests). I couldn’t really see the ball, so the eye drops obviously worked,” Taylor said.

“I have a pterygium in my left eye and I do that a lot (opens eyes wide).

“The optometrist said when it’s dark you’ll probably do this a lot, and I told the boys and they lost it because that’s how they take the mickey out of me.”

Doctors have warned Taylor that he risks further damage if he gets struck in the area over the coming months.

“(The doctors told me) to try not to get hit for the next four months.

“It’s an interesting thing to tell a player. I think I’ve got about two months to go so I’m counting down.

“It’s a bit nerve wracking when 160kmh is coming at you. 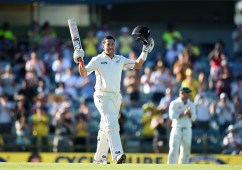 Ross Taylor on the verge of greatness

“But once you get into the fight, the adrenalin kicks in and the instincts take over and you just bat.”

Taylor’s 290 at the WACA was the highest Test score by a Kiwi in Australia, surpassing Martin Crowe’s previous mark of 188 set at the Gabba in 1985.

“I got a text from him last night and he jokingly said he was disappointed because that was his proudest moment having the record here in Australia,” Taylor said with a laugh.